Kirk Coryn of Kirk Kreations captured the grand prize with an Art Nouveau-style bed that featured incredible detail in veneer marquetry and elegant design.
Whether it was furniture, cabinets, architectural woodwork, marquetry, special products or student work, more than 120 entries showed spectacular veneer work in the 2019 Veneer Tech Craftsman’s Challenge.
Competition was particularly tight in the furniture category, and it was from that category that the eventual grand prize winner came. Kirk Coryn of Kirk Kreations captured that prize with an Art Nouveau-style bed that featured incredible detail in veneer marquetry and elegant design. Called “Life and Death in the Garden,” the bed featured a variety of veneers and techniques to depict flowers, a butterfly, and a spider (done in stone) with web.
“This project includes 12/4 solid African sapele for the framework and trims around the platform. The spider was cut from single chiqua jasper slab. The spider web was made from 22 gauge square sterling silver wire,” said Coryn. “The main background veneer used is by far my favorite, pomelle imbuya. The border is zebrawood with a 3/32 wide maple fillet. The center crest is amboyna burl. The butterfly is died black and orange veneer with white holly dots. The flowers were made using natural colored maple, holly, and sycamore veneers. The stems are sapele veneer. Leaves are two different colors of dyed green veneer.”
For grand prize, Coryn won $3,000, but that wasn’t the only prize for his stunning work. Since the primary goal of the contest is to promote superlatively achievement in veneer, the contest also recognizes distributors and sales people who suppy veneer for winning entries. The grand prize project distributor, Certainly Wood, received $2,000 and the distributor salesman, Greg Engle, received $1,000 for supplying veneer products used.
Here is a rundown on the other category winners. 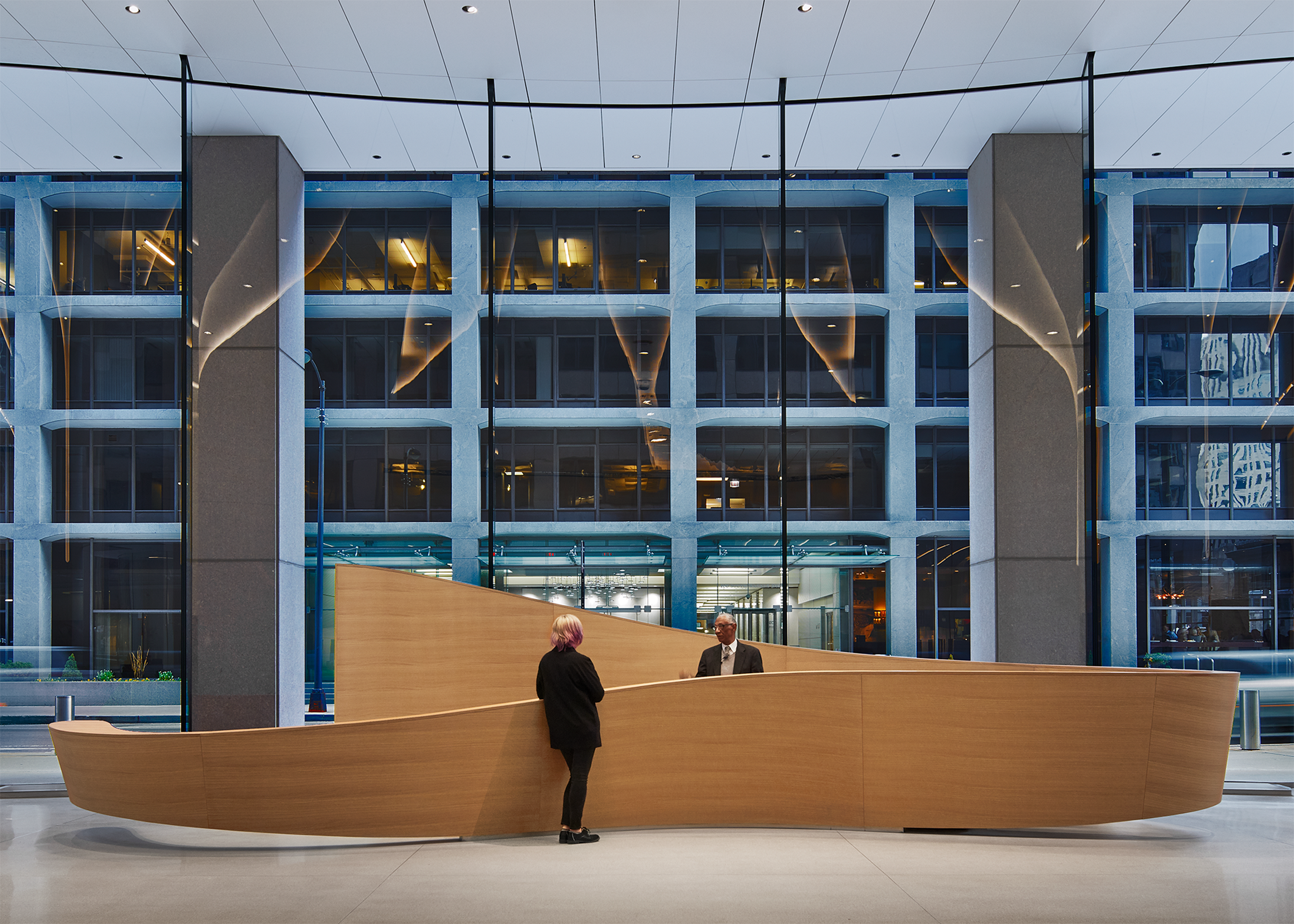 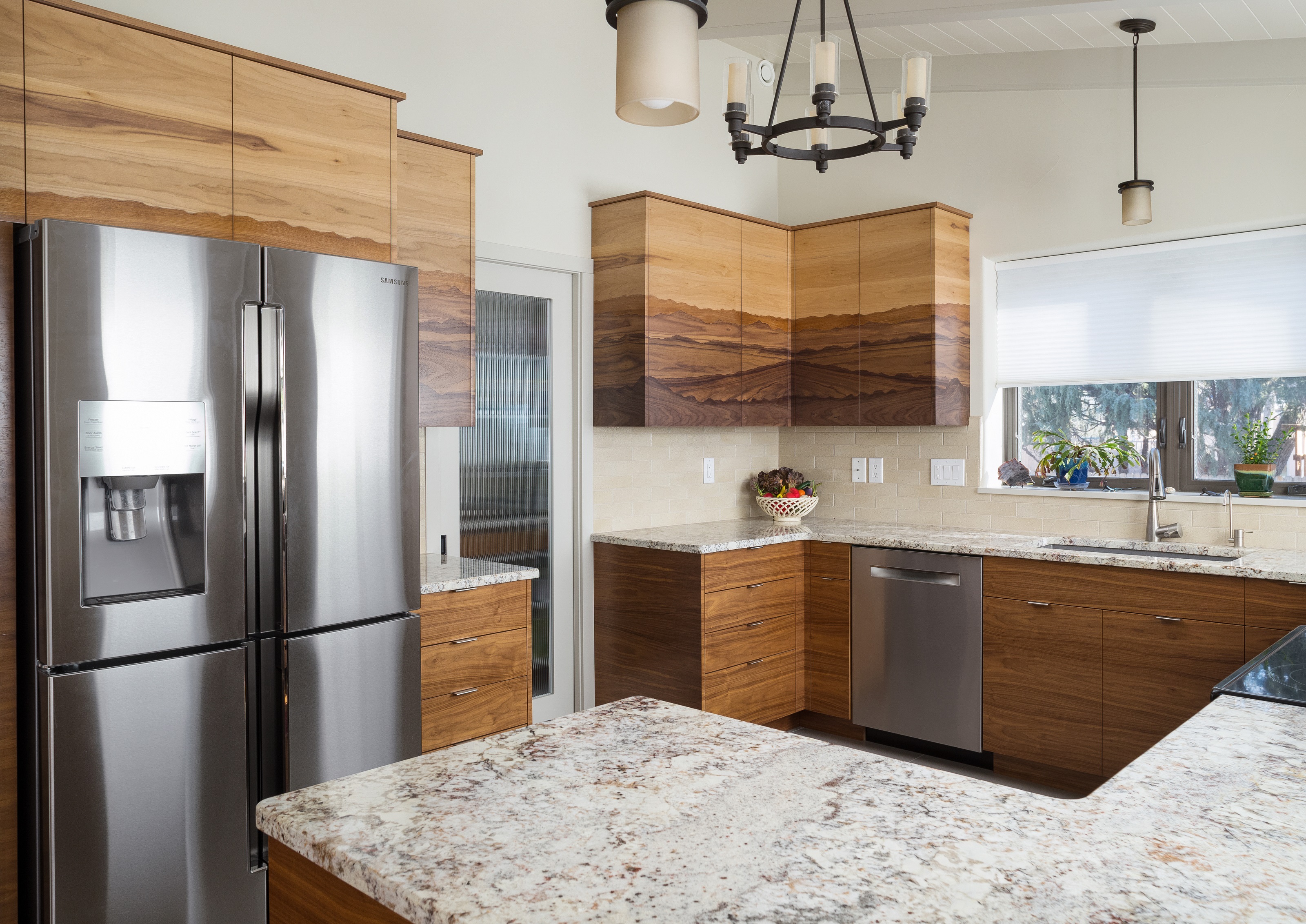 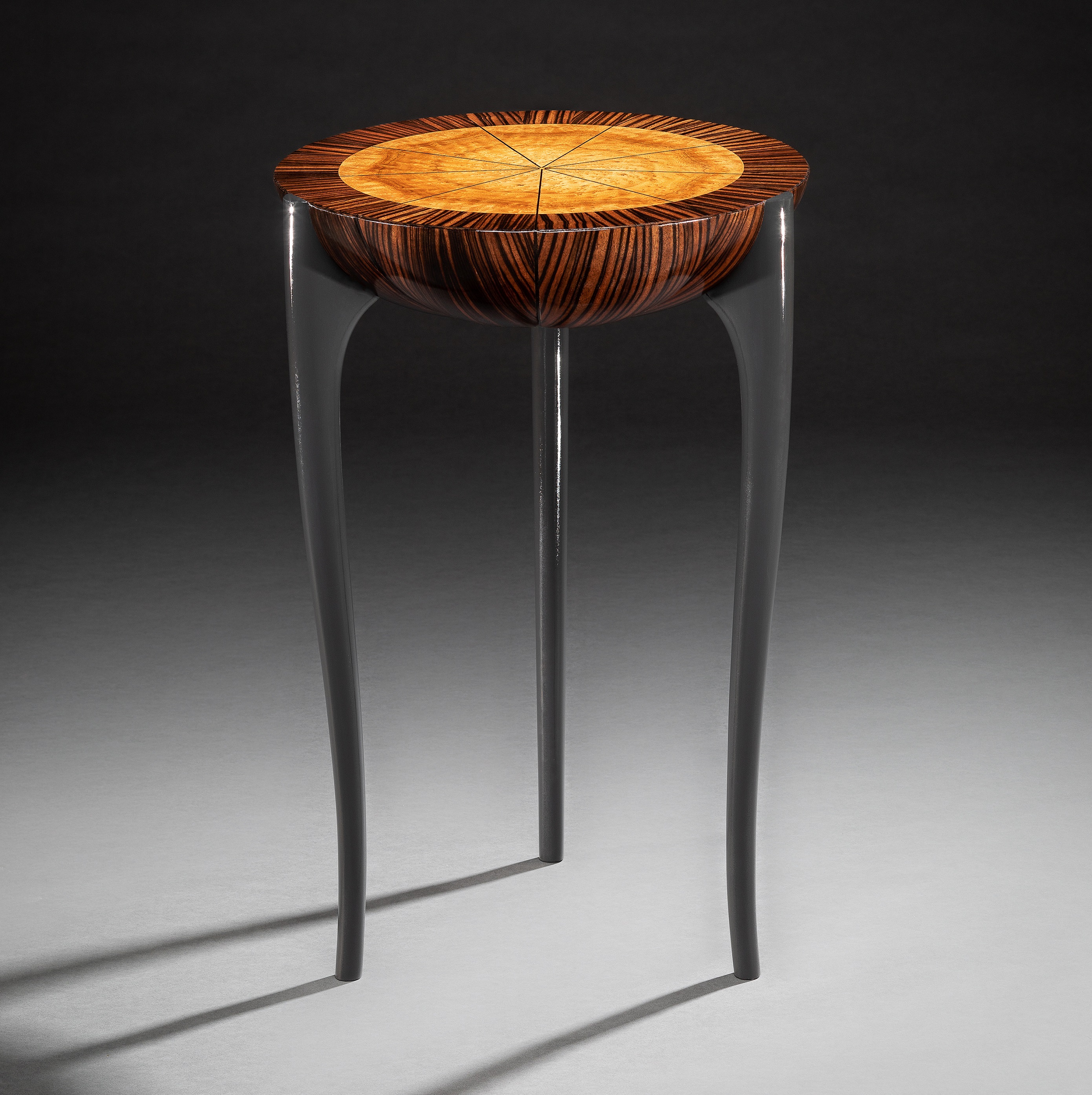 First place in furniture went to Owain Harris of O.H. Harris Cabinetmaker for a table he calls “Powers of Nine.”
Furniture – First place in this category went to Owain Harris of O.H. Harris Cabinetmaker for a table he calls “Powers of Nine.” The piece features a nine-way match in Macassar ebony veneer paired with camphor burl, arranged in a slip-matched pattern to evoke an undulating nebula or star cluster, said Harris. “The inspiration for this piece began with the classic Charles and Ray Eames film “Powers of Ten” that started an inquiry into the ideas of scale, and the repetition of certain motifs in nature,” he said. “This is definitely a design that is built around the creative possibilities of using veneer.”
Honorable mention for furniture went to Joseph Mendel for his “Hepplewhite Bow Front Sideboard.” It was based on original Hepplewhite piece made in Massachusetts between 1780 and 1800. Mendel noted that he benefitted from modern supplies and techniques that the original craftsman did not have. “I was able to accomplish my commission under more convenient circumstances than the original craftsman,” he said. “All my veneer was properly prepared before it ever made its way to my shop. With ease I found suitably dried, exceptionally stable, crotch mahogany of consistent thickness from each sheet of the flitch. I have a tremendous appreciation for the designs of Hepplewhite, Sheraton, Chippendale and others centuries preceding me; I equally admire how they made their work under rudimentary shop conditions. I meet the criteria of their masterpieces with skill, modern tools, indoor lighting, and the ease of which I can find virtually any type of quality wood product.”
First-time entrant – The special prize for a first-time entrant also went to a furniture category entry. Ken Irish of D’Ireys Cabinetmakers won for his “Walnut Dining Table.” Designed to expand from seating for 10 to seating for 16, the table features a tree motif. The marquetry involved used figured anigre, koa, red gum, ebony, sapele, eastern maple, zebra wood, lyptus, sapele pomele, teak, redwood burl, maple burl and fiddleback maple, all suppled by DRC Veneer. 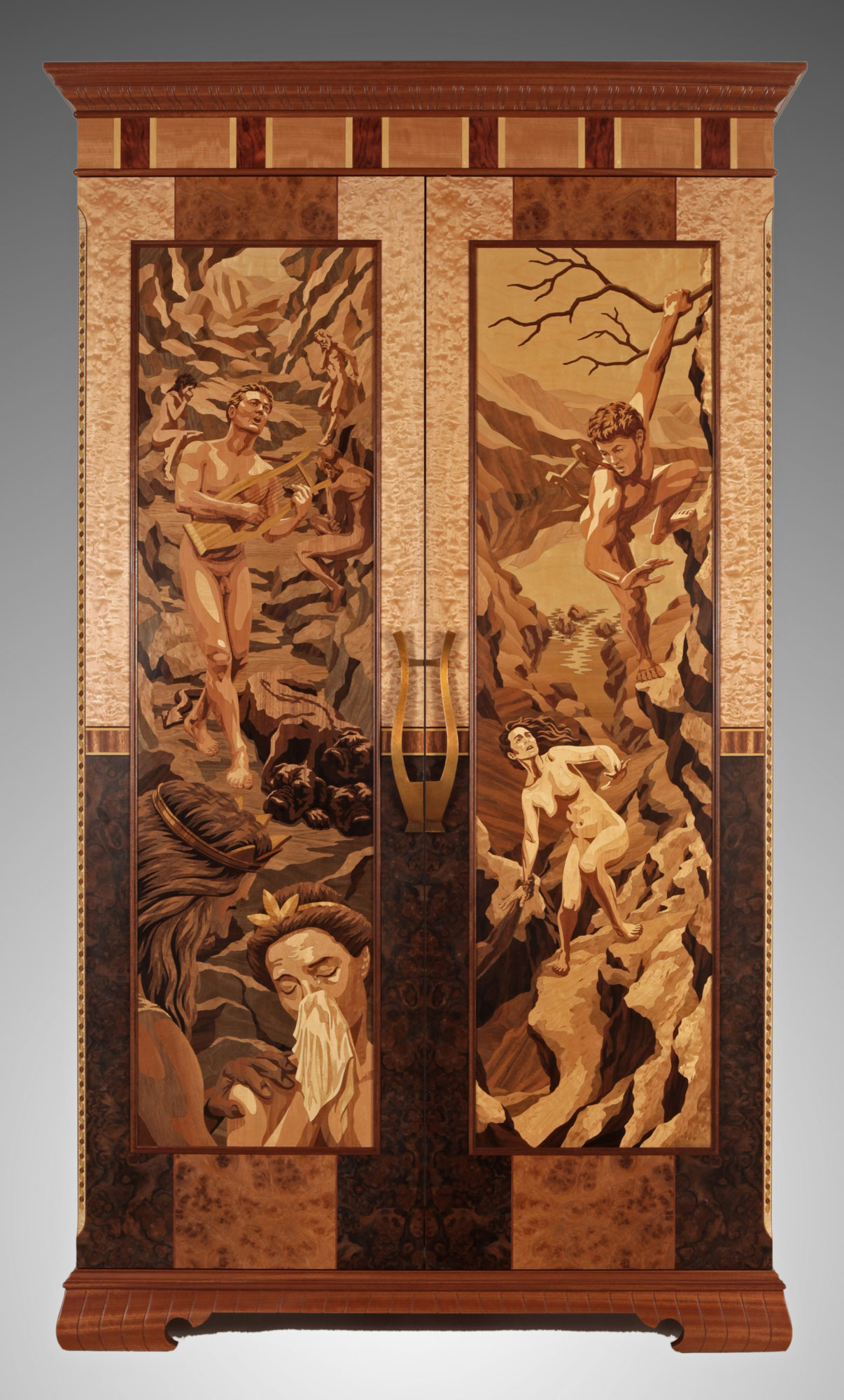 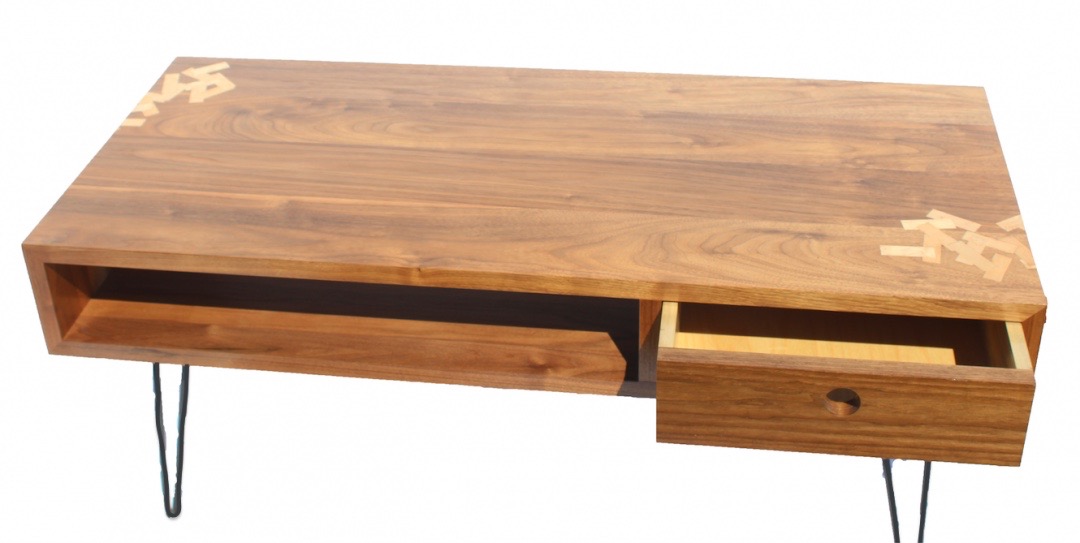