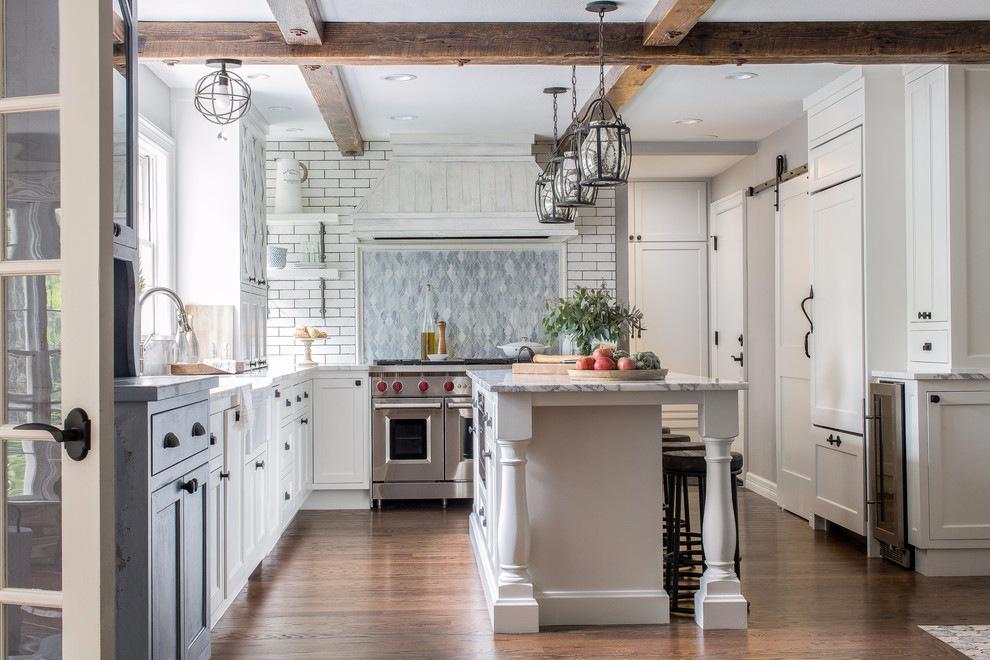 Barn doors, apron sinks, a mix of metal and wood and painted cabinetry are all components of the farmhouse style. Weathered elements give this style its characteristics, warmth, and charm. Emerging trends include the use of flexible refrigeration, including convertible drawers, and column refrigeration. Credit: Designer: Taryn Emerson, Taryn Emerson Interiors. Photographer: Jared Bumgarner

The kitchen and bath market is projected to reach $178 billion in 2018, according to the National Kitchen & Bath Association’s Size of Market Study and Outlook. That figure, which is for products and materials only and excludes design services and costs of labor and installation, represents a significant jump from 2016 figures of $147 billion, and the projected $163 billion in 2017.

So, what are homeowners buying? According to NKBA’s 2018 Design Trends Survey, here’s what’s hot, and what’s not.

The 2018 Design Trends Survey was conducted among designers, remodelers, architects, dealers and manufacturers. The results of the online survey were based on feedback received from 822 U.S. and Canadian professionals, between Aug. 17 to Sept. 6, 2017. 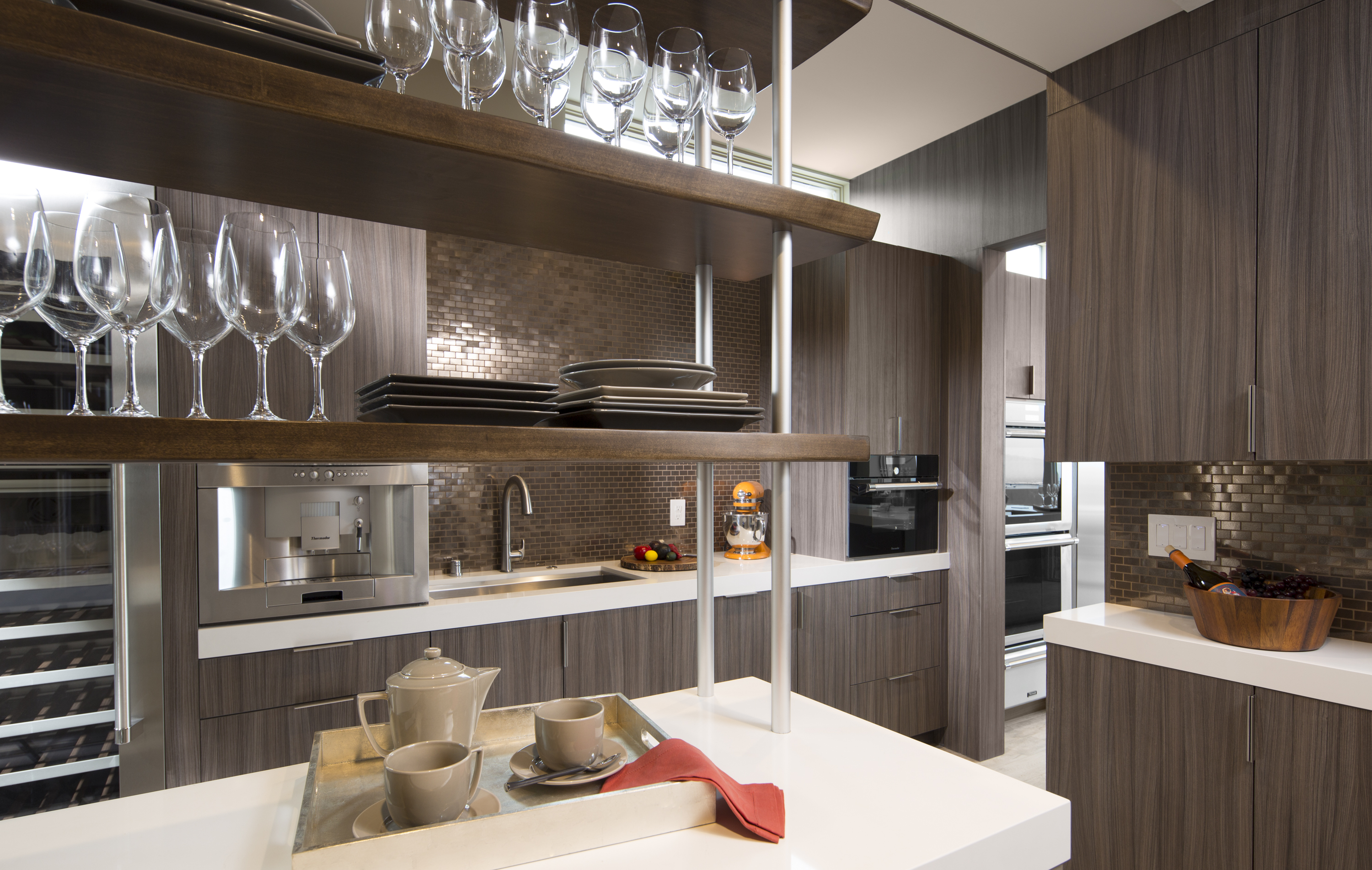 Styles: Traditional has officially been ousted from the top. Farmhouse kitchens are the most popular style, with 79% of professionals reporting it as “trendy” or “very trendy.” Transitional and Contemporary styles are also in vogue, earning trendy votes from 77% and 73% of respondents, respectively.

Cabinetry: Paint is definitely the predominant choice for cabinet facing, with 86% indicating the look‘s trendiness. Wood was second at 74%, while glass trailed at 44%. In terms of construction, homeowners have a slight preference for frameless (68%) as opposed to framed cabinets (57%). When it comes to door types, homeowners choose full overlay (86%) over inset (49%).

Hardwood floors continue to trend in the kitchen, with 78% of respondents indicating its demand. Ceramic and porcelain tile were the second-most popular, at 68%, and engineered wood was third at 56%.

Color schemes: White and gray continue their dominance for hottest kitchen colors, with 90% and 89% of respondents selecting them as top choices. All other colors trail far behind – blue (52%), black (41%) and beige/bone (40%).

Technology: According to industry professionals, the percentage of U.S. homeowners who have already integrated technology into their kitchen designs is relatively low. Wall-mounted flat screens are by far the most popular device already in the kitchen (62%), followed by docking/charging stations (39%). Topping the list of other devices being seriously considered by homeowners are flush-mounted lighting controls (57%), keypads to control lighting (50%), motion-sensor task lighting (49%) voice-enabled automation devices (47%). 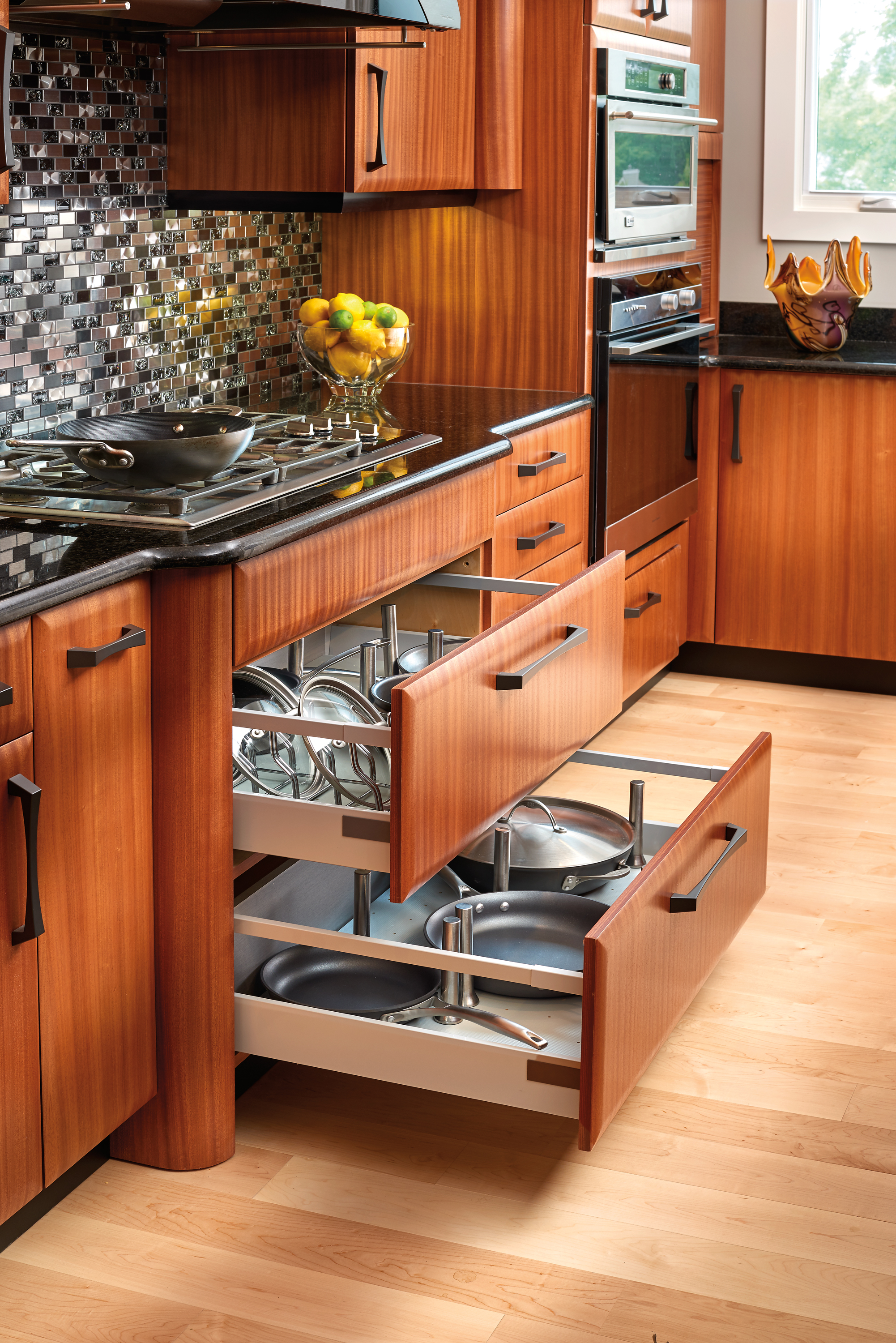 Homeowners love an uncluttered look in their kitchens, as evidenced by the popularity of so many built-in storage options in the cabinets. Credit: Designer: Tom E. Lutz, AKBD. Photographer: Mike Tuell

Styles: Contemporary-styled kitchens top the chart, with 83% of professionals reporting them as “trendy” or “very trendy.” Transitional is the second most popular style (72%) and Mid-Century Modern ranks third (63%). Contemporary and Mid-Century Modern styles are significantly more popular in Canada than the United States, while Farmhouse and Traditional are significantly less popular in Canada.

Cabinetry: Like U.S. homeowners, Canadians have a strong preference for painted cabinets (81%) and full overlay doors (83%). When it comes to cabinet construction, however, Canadians are significantly more likely to choose frameless cabinets for their kitchens (89% Canadian vs. 68% U.S.).

Surfaces: When it comes to both countertops and flooring, the preferences of Canadian homeowners are nearly identical to their U.S. counterparts. Quartz is by far the most popular countertop material and hardwood is the predominant flooring choice, at 94% and 80%, respectively.

In terms of backsplashes, however, Canadian tastes could not be more different. Laminate (89%), concrete (80%) and painted wallboard (78%) are in vogue, compared to ceramic/ porcelain tile, glass and natural stone tile in the United States.

Color schemes: Gray and white are the trendiest kitchen colors in Canada, with 89% and 86% of respondents indicating their popularity.

Technology: When it comes to integrating technology into kitchen designs, Canada and the U.S. are on the same page. Wall-mounted flat screens are the most popular device homeowners already have in their kitchens (65%), followed by docking/charging stations (45%) and distributed audio (31%). 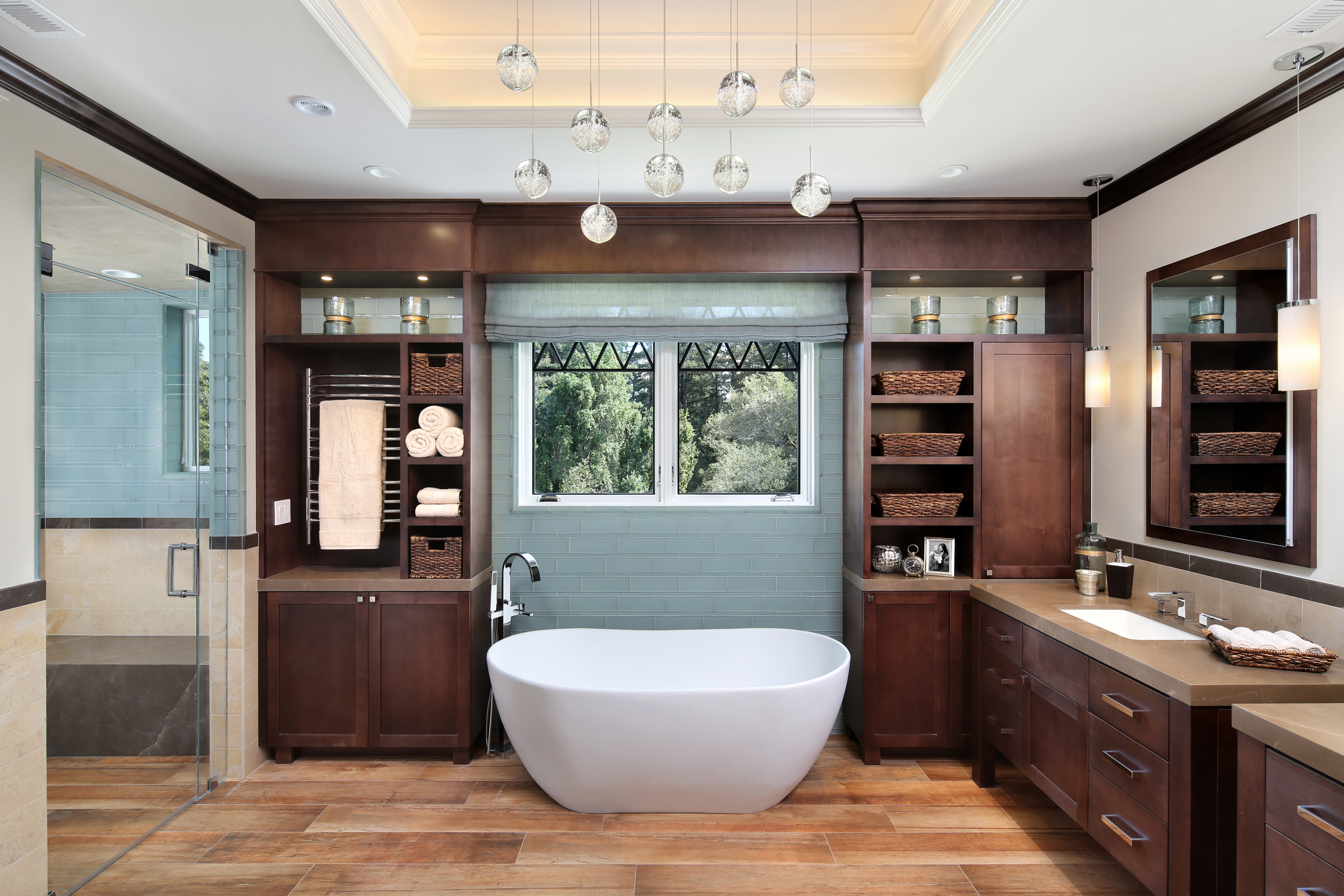 Styles: Not unlike the kitchen, transitional and contemporary are extremely popular bathroom styles among U.S. homeowners, with 74% and 60% of professionals rating them “trendy” or “very trendy,” respectively. For the second consecutive year, traditional-styled bathrooms follow in third place at 53%.

Cabinetry: Wood is the material of choice for bathroom vanity doors, with 74% of industry pros indicating their popularity. Both built-in and furniture-like pieces are common, as are both frameless (67%) and framed (52%) construction.

Surfaces: Quartz is as popular in the bathroom as it is in the kitchen, with 91% of pros saying it’s trendy. Granite and marble again followed, at 61% and 45%, respectively.

Color schemes: White and gray are just as hot in bathrooms as they are in kitchens, with both considered trendy by 88% of industry pros. Blue trails at 62%.

Lighting: Good lighting is key in the bathroom. Shower lighting (81%), recessed fixtures (77%), and sconces (72%) are the most popular options for the bath.

Technology: U.S. homeowners are much more likely to integrate technology into their kitchens than in their bathrooms. Only a small percentage of homeowners already have wall-mounted flat screen TVs in their bathrooms (23%), lighting controls connected to their mobile devices (16%) or music in the shower (14%). 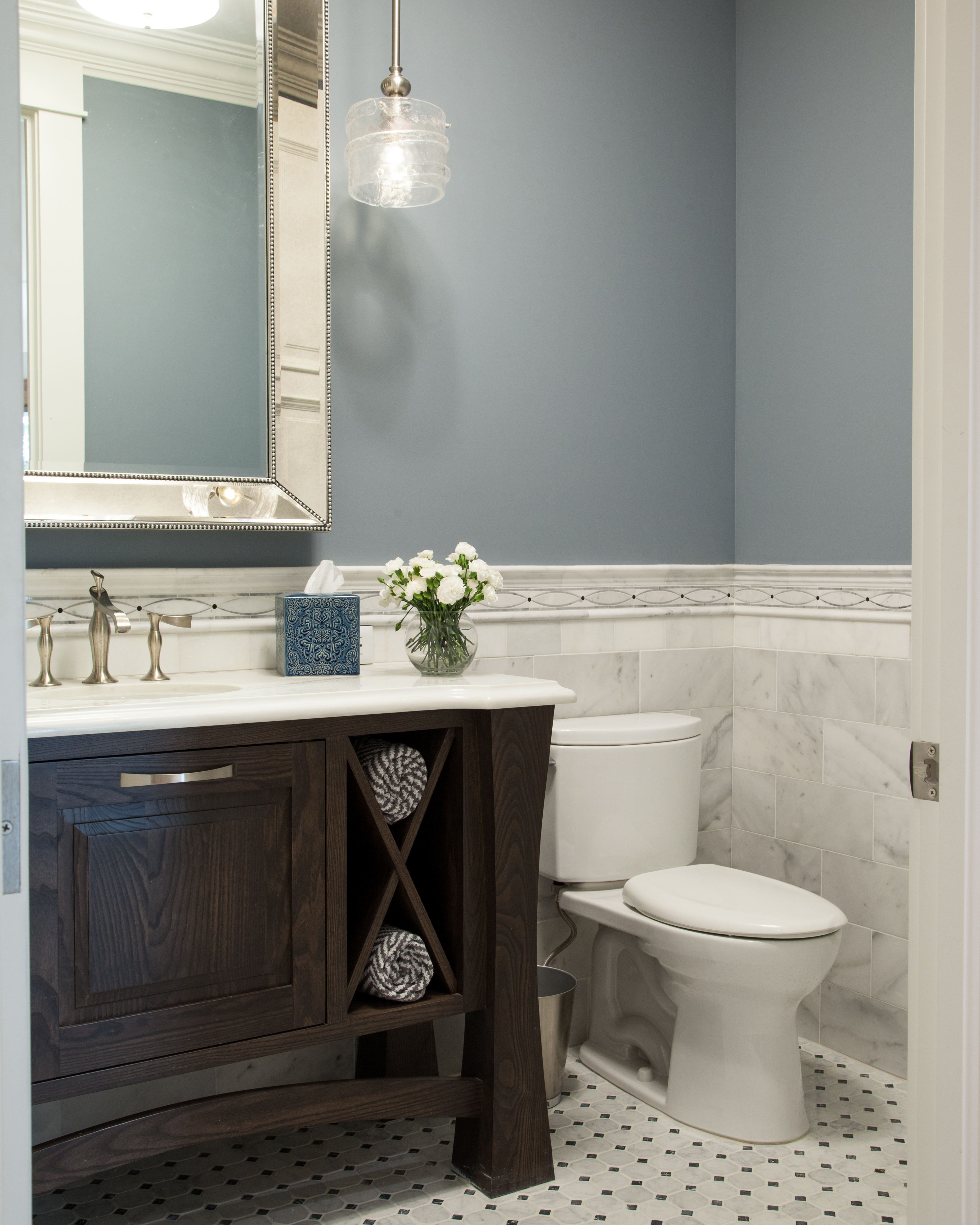 Styles: Like U.S. homeowners, Canadians have a strong preference for these styles in bathrooms: Transitional (67%), Contemporary (57%) and Traditional (52%). Canadian pros also report that Industrial-style bathrooms are very popular among their clients (also at 57%).

Cabinetry: Wood is also the material of choice for bathroom vanity doors in Canada, with 83% of respondents citing it as trendy. Laminate, glass and acrylic are currently much less popular at 33%, 33% and 29%, respectively. Also as in the States, both built-in and furniture-like pieces are common in Canadian bathrooms (83% and 69%). Unlike the U.S., however, frameless cabinets are the predominant choice in Canada, garnering a trendy vote of 83% (framed cabinets capture just 12%).

Surfaces: The top surface choices in Canadian bathrooms are identical to those in the United States: quartz countertops, porcelain-tiled floors and painted walls are the overwhelming favorites at 95%, 83% and 88%, respectively.

Color schemes: White and gray are also hot colors in Canadian bathrooms, with both being rated trendy by 88% of industry pros. Blues and blacks are far less popular at 53%. Just as black is emerging in Canada as a popular color for bathroom fixtures, it is a color scheme that is significantly trendier than in the States (53% Canada vs. 31% U.S.).

Source: The NKBA survey includes responses from 822 designers, remodelers, architects, dealers and manufacturers. Data was collected in August and September 2017. For more information contact NKBA at 800-The-NKBA or visit NKBA.org. 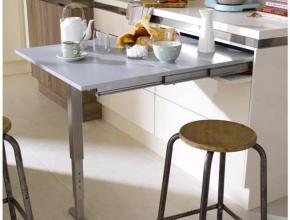 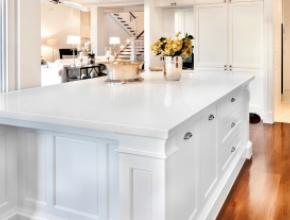 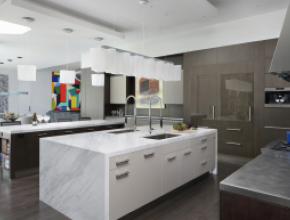