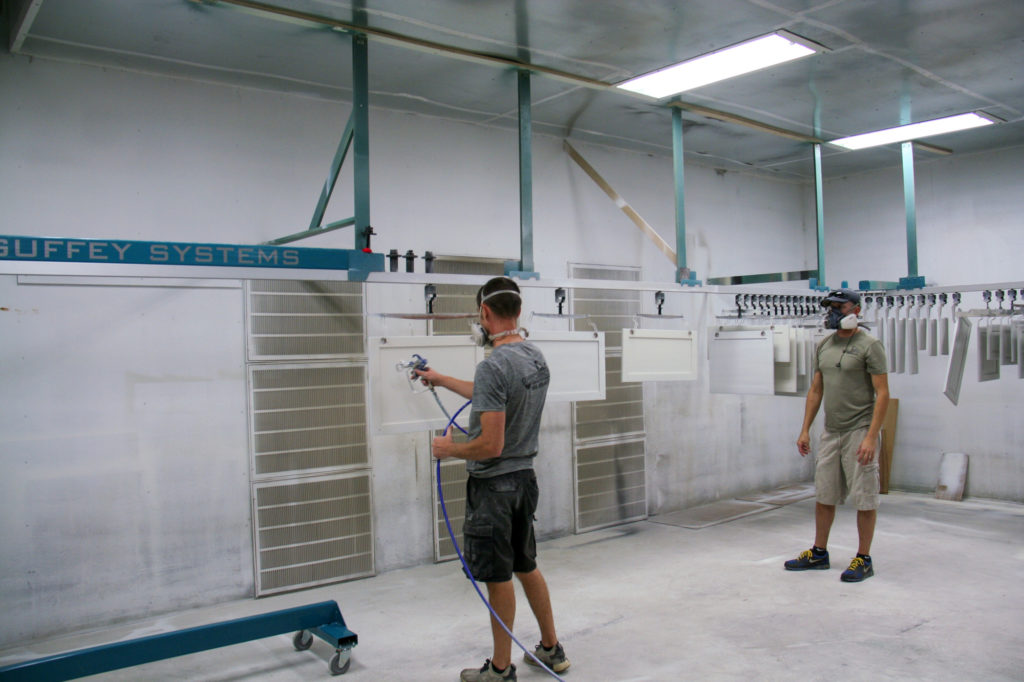 The Guffey System makes vertical spraying easy and efficient, allowing operators to spray all sides of a part from one place, rotating it, and then sliding it on a rail to where it needs to go.
Sometimes to make finishing faster it’s not about the actual finishing but it has everything to do with how you handle the parts you are finishing.
That’s some of the thinking behind a new spray finishing system developed by Nathan Guffey. He figured a way to facilitate vertical spraying and eliminate handling of wet parts, as well as making it possible to spray all sides of common cabinet parts without having to wait for one side to dry.
Guffey developed the system originally for use in his own cabinet shop. He worked with APTUS DesignWorks, an engineering and design firm, to develop the system to be modular and marketable for any shop.

While many cabinet shops spray doors and panels flat, the Guffey system takes those parts and hangs them vertically. Of course, many shops have tried vertical spraying because it allows spraying all sides at once. What makes the Guffey System different is the specialized accessories and even mobile equipment for efficient handling.
First, there are hangers designed to attach to parts only in places that will not be seen when the part is installed. Developed over three years of testing, the hangers are designed to be used as handles to hold, move or steady parts during the finishing process. Those same hangers work with pivoting cars that slide in rails for movement. There are stationary rails that can be built in whatever configuration you need for your spray booth and sanding areas, including turning corners. Mobile rails can hold a selection of parts and roll to different locations such as transport between sanding and spraying areas. 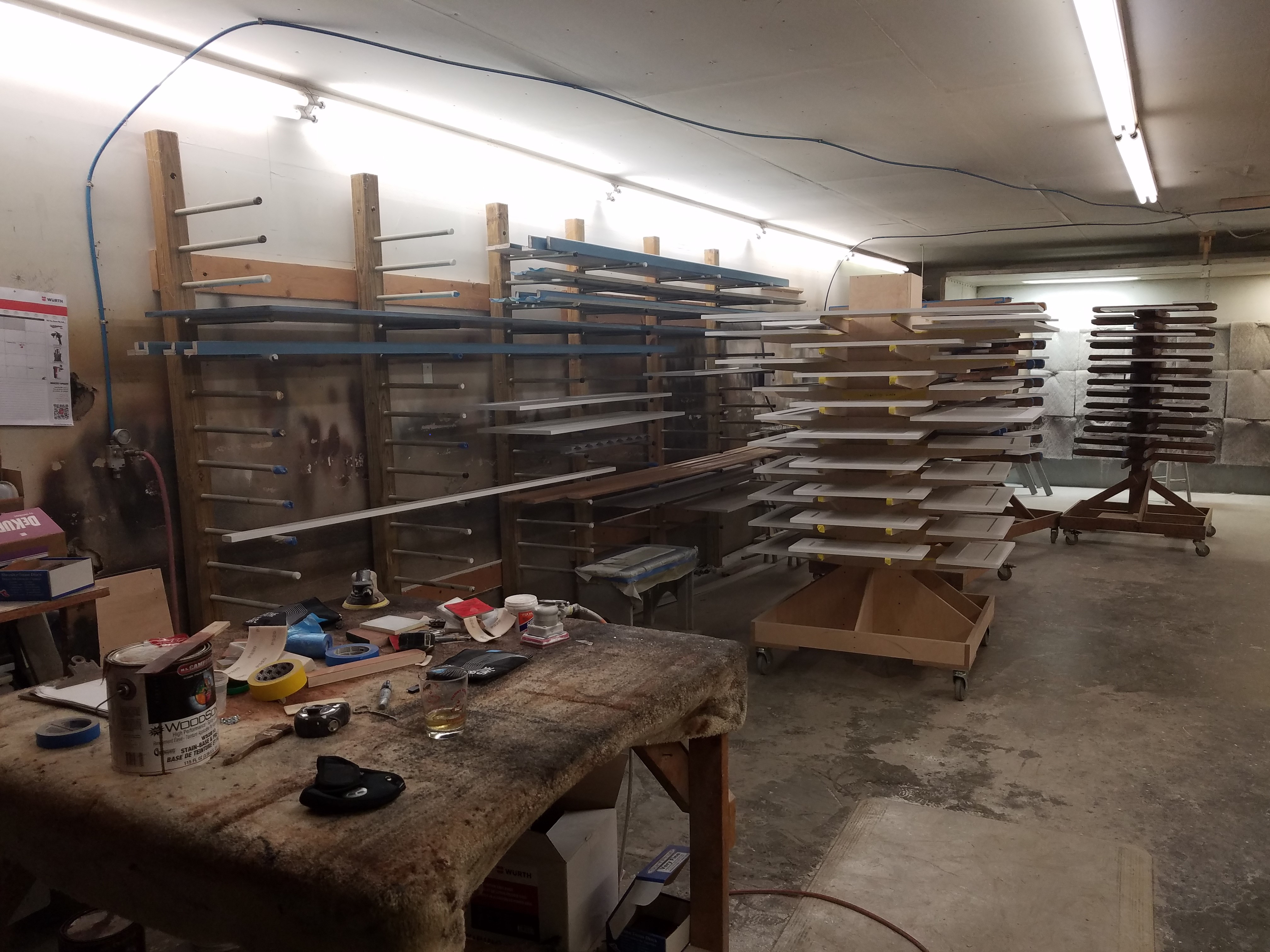 Before adopting the Guffey System for handling parts for finishing, Pig House Cabinets in Ringgold, Georgia, emphasized flat finishing with trees of racks to hold parts while drying between finishing each side.

Guffey says there are dramatic efficiency gains to be had from the system, making finishing operations up to 2.5 times faster. But can a material handling system that isn’t changing the kind of spray finish application really be that much faster, and what is involved in changing over to the system? We talked to shops that have adopted the system to get some answers.
Chad Hamilton at Pig House Cabinets in Ringgold, Georgia, is an enthusiastic early adopter of the system. His shop has 15 employees in 10,000 square feet. Originally they were doing a lot of commercial work, but with the pandemic they switched to emphasize residential work. Hamilton says, before the Guffey System, his shop was spraying mostly flat. He described the process they previously used as mostly flat finishing in which two operators would use parts racks, spraying 60 to 120 parts a day. But then they would have to turn everything over to do the reverse side the next day. 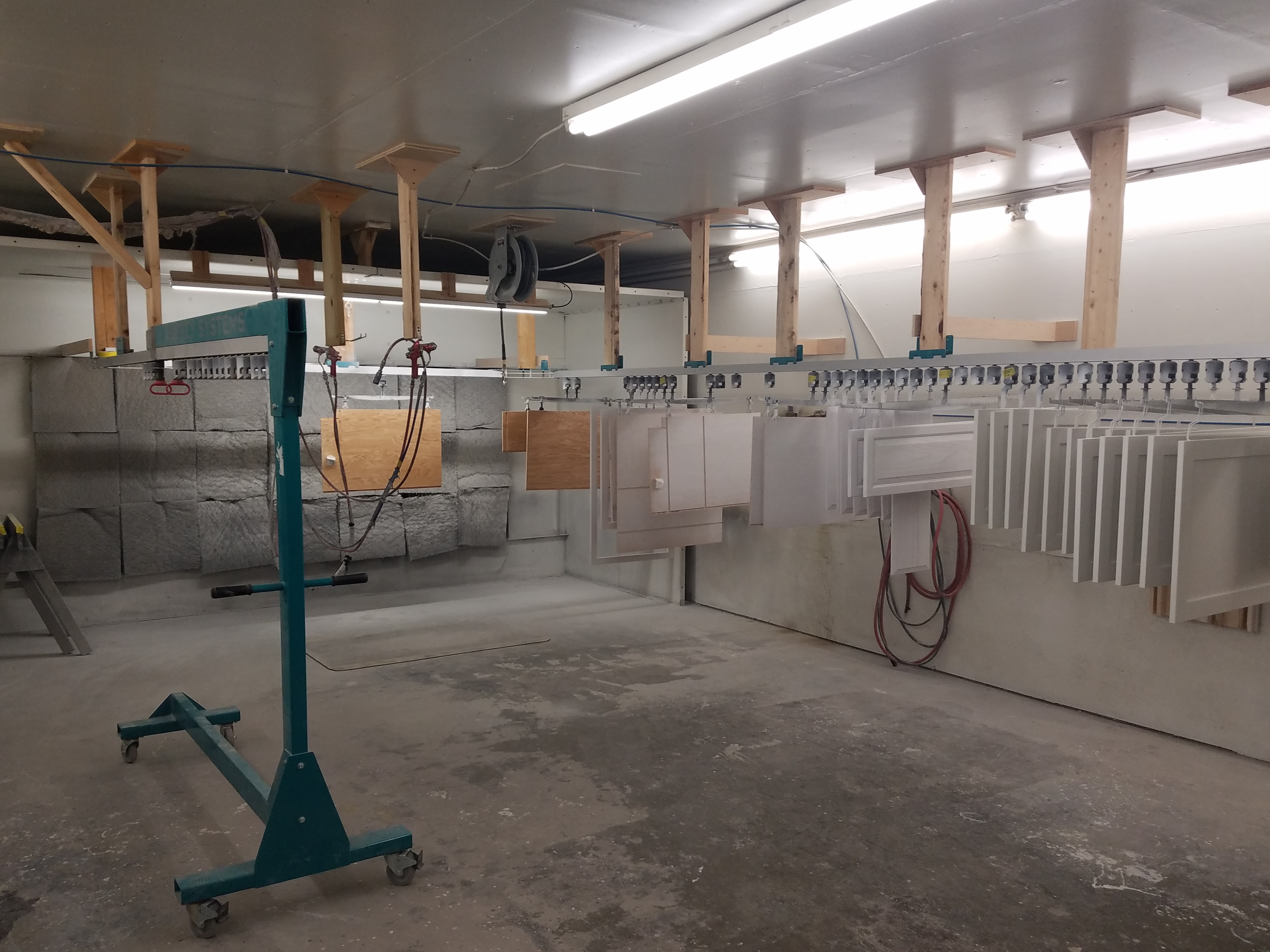 After adopting the Guffey System, Pig House Cabinets converted to all vertical finishing that allows spraying all sides of parts in one session from one location.
“Now both sides are down and out in a 6-hour day,” Hamilton said. “There’s a whole lot less wasted movement. Everything is in a comfort zone right in front of you.” He added that there is less rework because the system keeps parts from bumping into each other and minimizes handling.

Hastings Read of Oakleigh Customs in Mobile, Alabama, had similar praise for the system, even though he is not finishing cabinet parts. His company is six employees working in 6,000 square feet to make historic windows and doors, small quantities of historic mouldings, and shutters. They also make European-style windows and doors. He had seen overhead finishing systems in Europe, but he said he could never figure out how to make it work in his 20 x 20-foot spray booth until he got the Guffey System. 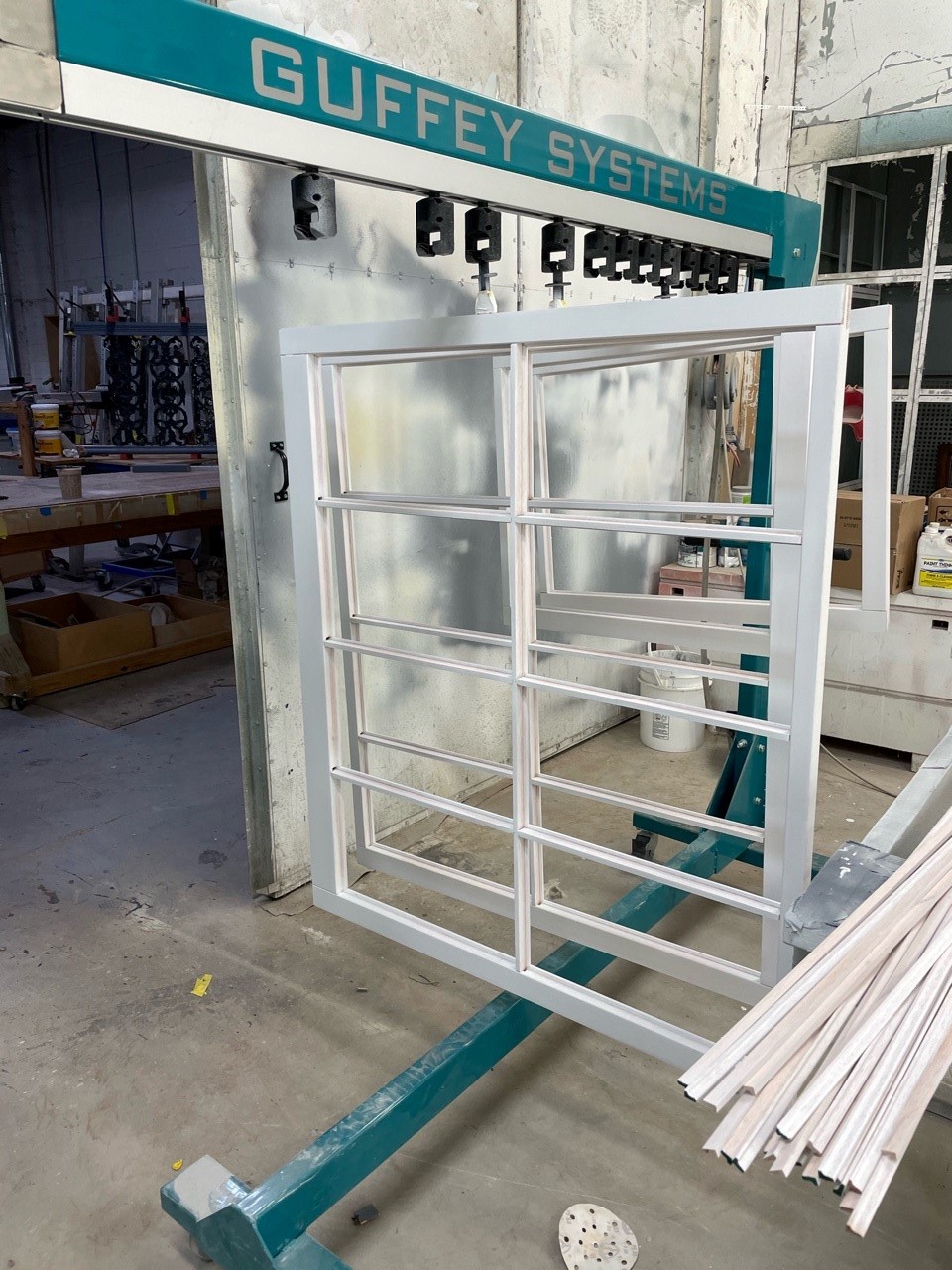 Hangers in the Guffey System are designed to mount to areas of a part that will not be seen after installation. Here are window parts hanging on a Guffey System mobile rail at Oakleigh Customs.
“Handling these things flat you are tearing up dollar bills,” Read said. “First time we used the Guffey System, what would have taken an hour took 15 minutes.”
Read also had high praise for the ease of installing the system. He noted the clear CAD layout drawings, special tabs to help line things up, and even the packing of the system parts. He said it took two people four and a half hours to install the system in his shop.
Of the Guffey System developers he said, “These are people who took extraordinary time in developing this. You can tell when someone is thinking something through. It doesn’t feel like a gen-one product.”

Both Read and Hamilton made comparisons of the gains from the Guffey System to automation elsewhere in their shops.
“We did research into a flat line system,” he said. “It would take up a big chunk of room and a big chunk of money.” For his application, he felt he would need additional equipment such as a dryer to make the line work, and he was concerned about the time required for finish changeovers. “It’s not uncommon to spray five colors in one job,” he said. “And it’s still only one side at a time.”
“Previously, finishing was a choke point,” Hamilton said. “Now getting stuff into my finish room is the choke point.”
Read says the system is an opportunity for small to medium-size operations to compete with larger manufacturers. “At end of day a wood product is its finish,” he said. “The smaller side of the industry are going to have to lift their game in finishing.”
For more information about Guffey Systems, visit guffeysystems.com. Guffey Systems will also be exhibiting at the Wood Pro Expo/Closets Conference & Expo in June.
Watch the video below to see the Guffey System in action at Oakleigh Customs in Mobile, Alabama. 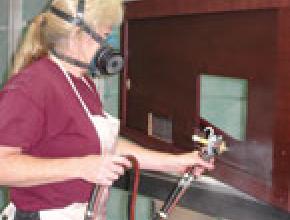 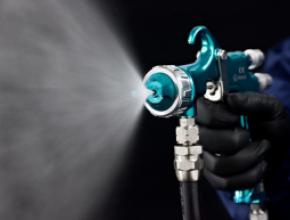