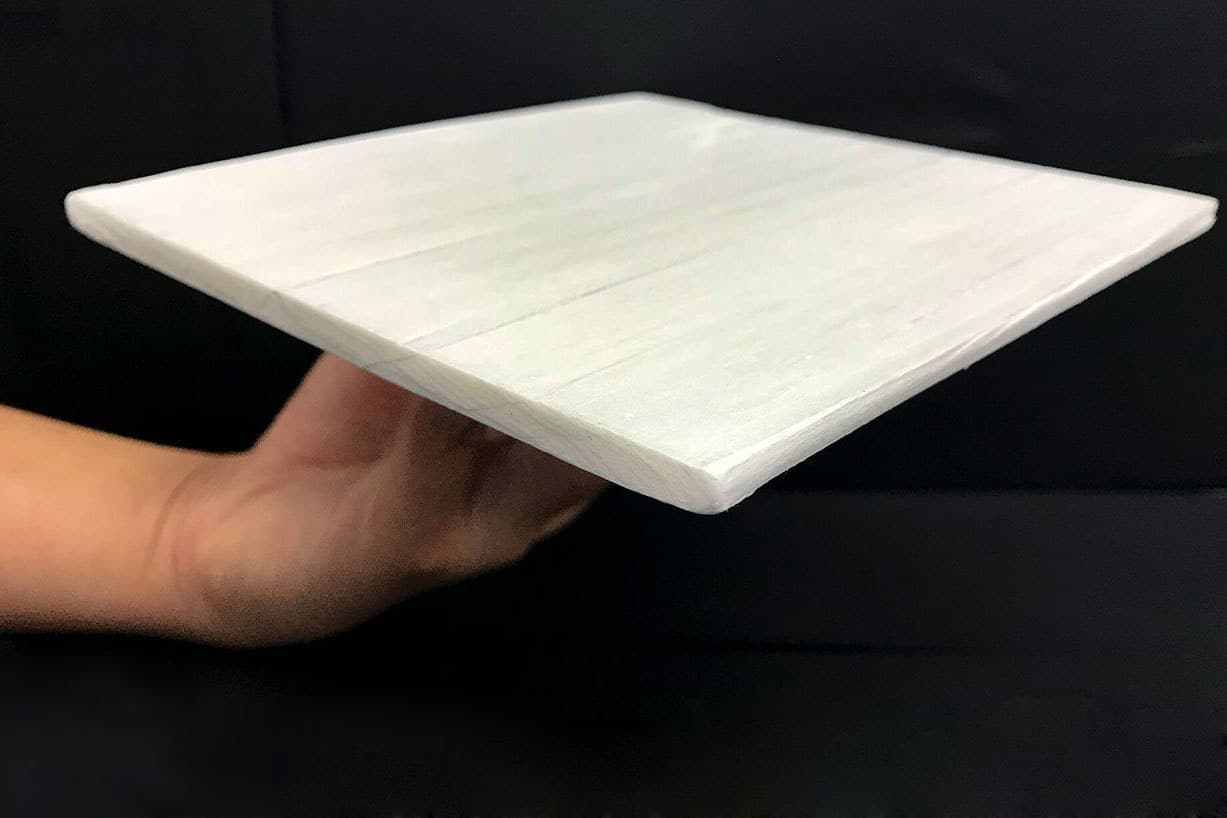 COLLEGE PARK, Md. - The research team behind "super wood" is at it again - this time engineering a wood that's capable of staying 12 degrees cooler than regular wood.
Researchers at the University of Maryland and the University of Colorado hoped to find a passive way for buildings to dump heat sustainably. The solution is wood - it is already used as a building material, and is renewable and sustainable. Using tiny structures found in wood - cellulose nanofibers and the natural chambers that grow to pass water and nutrients up and down inside a living tree - the researchers engineered wood that radiates away heat.
The UMD team soaked basswood in a solution of hydrogen peroxide, which destroys the wood's lignin. The team then used a hot press to compress the remaining cellulose and hemicellulose components together. To make it water repellent, they added a super hydrophobic compound that helps protect the wood.
[[{"type":"media","view_mode":"media_original","fid":"107593","attributes":{"alt":"","class":"media-image","typeof":"foaf:Image"}}]]
Researchers tested the bright white material - which reflects virtually all incoming light - on an Arizona farm one hot and sunny afternoon. They found that the cooling wood stayed an average of 5 to 6 degrees cooler than the ambient air temperature, even during the hottest part of the day. It stayed 12 degrees cooler than natural wood, which heats up far more easily in sunlight. The team estimated that in buildings constructed since 2004, the material would save 20 percent in air conditioning costs.
In desert regions, the material could save AC costs by as much as 60 percent, says the team. The wood could also provide in relief in regions where AC is less common, like developing countries.
Wood isn't regularly used in roofing though, as it's more flammable and less durable than asphalt shingles. It also would make heating a building harder and more expensive.
The UMD team's "super wood" was popular on Woodworking Network early last year. The engineered material is more than 10 times stronger than natural wood, but six times lighter and five times thinner.
Other engineered wood materials are on the rise.
One of these new materials involves the marine tunicate, an exotic sea invertebrate often used in Asian cuisine, which has been combined with wood pulp to form a composite material that's flexible, sustainable, non-toxic, and UV light-reflective. The material could be used in construction, food packaging, biomedical devices, cars, trucks, and boats, say researchers.
French tire maker Michelin has declared that it will begin manufacturing wood-based tires. University of Delaware researchers have developed wood-based sticky tape.