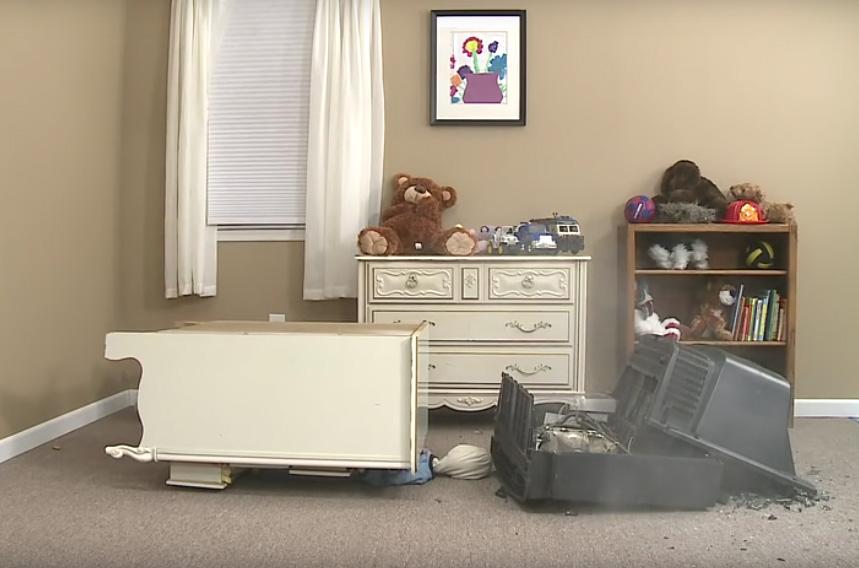 While the tip-over act, aka the STURDY Act, still sits waiting on action by the House, the Consumer Product Safety Commission has adopted a mandatory product safety rule that will significantly change the way clothing storage furniture is constructed, tested and labeled.

The standard will take effect 180 days after it is published in the Federal Register. It is designed to significantly change the way clothing storage furniture is constructed, tested and labeled, with the goal of protecting young children from injury or death resulting when furniture tips over on them.

The rule covers freestanding chests, dressers, armoires and bureaus but is not limited to furniture that is marketed for “clothing storage.” Any storage furniture that is 27 inches or more in height with a total functional volume of closed storage (drawers and/or interior cabinet space) and open storage (shelves) greater than 1.3 cubic feet falls within the scope of the standard. Nightstands, shelving units, office furniture, dining furniture, accent chests and any other type of storage furniture meeting this functional definition must be tested and labeled according to the requirements outlined in the rule.

According to an AHFA statement, the group opposed the rule when it was first released in July 2021. In public testimony as well as in detailed written comments submitted to the CPSC in April this year, AHFA cited multiple deficiencies in the two test methods prescribed in the rule for determining product stability.

Both test methods, the association said, include placing units on a forward angle of 1.5 degrees to simulate the effect that carpeting has on stability. Unless the unit has a drawer interlock system, testing also is conducted with all drawers open and containing 8.5 pounds of weight per cubic foot to simulate drawers filled with clothing. (A separate test is used for units with drawer interlocks.) Then, in the test method that will be used for most units, weight is applied to the uppermost extended drawer until the unit begins to tip. At this point, the unit’s “tip-over moment” is calculated using a formula outlined in the rule.

The tip-over moment is then used in another calculation that determines whether the unit is sufficiently stable to withstand tipping over when a child is climbing or playing on the unit.

At AHFA’s Regulatory Summit in September 2021, member companies shipped multiple clothing storage units to the conference for a live demonstration of the CPSC’s proposed testing protocol. Using an Excel worksheet to conduct the complex calculations in real time, AHFA   demonstrated how the CPSC’s test method requires precise measurements, in particular identifying the exact “tip-over moment.” Yet this input relies on the perception of the person conducting the test.

After hundreds of sample tests conducted by member companies and by independent labs, AHFA concluded that the complex data acquisition and calculations required by the rule produced such variable results that the rule was likely to end up mired in prolonged legal challenges. Ultimately, AHFA believes the rule could be unenforceable.

In its comments, AHFA also detailed objections to a new hangtag required in the rule. CPSC designed the hangtag to prominently display a unit’s stability rating, which is derived from the calculations described above. Originally, the rating was to be displayed on a scale of 0 to 5, with 0 labeled on the tag as “less stable” and 5 labeled as “more stable.

But AHFA members were unable to find a single clothing storage unit in any price point or design that could reach the minimum stability rating of “1” without modifications. In fact, CPSC staff noted in its Notice of Proposed Rulemaking that, in all the testing and research conducted in preparation for publishing the rule, they found only one unit that could achieve the minimum rating of “1”. (Staff declined to reveal the manufacturer of that unit.) Even after product  modifications, like adding drawer interlocks, shortening drawer sliding length, and/or adding significant counter weight, AHFA found only fractions of differentiation between tested units, with most achieving ratings between 1 and 2.

CPSC amended the hangtag in its final rule, changing the rating scale from 0-to-5 to 0-to-2, (with “1” continuing to be the minimum acceptable stability rating).

“Further, AHFA supports stability testing that provides consumers with an assurance of compliance, rather than a sliding scale of ‘more’ or ‘less’ stable indicated by mere fractions within in a vaguely defined, two-point rating system.”

These objectives are met in the STURDY Act, legislation that passed the Senate last month and now awaits approval by the House. With considerable efforts from parents, consumer advocates and AHFA, this legislation achieved bipartisan support.

As approved by the Senate, STURDY outlines furniture performance testing that simulates the same “real world” conditions as the CPSC’s rule: carpeted surfaces, multiple drawers open, drawers filled and the dynamic interaction of a child climbing. However, these conditions would be replicated in measurable pass/fail tests that have undergone an inter-laboratory review confirming that they are consistently repeatable and reproducible, Perdue explains.

“Only with these strong parameters in place can non-compliant products be identified and removed from the marketplace. This has been one of AHFA’s top priorities for the last two decades,” he added.

The new stability performance tests required by STURDY have been added to the existing voluntary stability standard, ASTM F2057, with the overwhelming support of all stakeholders. The Senate version of STURDY would require CPSC to adopt the updated voluntary standard as the federal consumer product safety rule, as long as it meets the requirements of the Act. This would then supersede the CPSC rule adopted yesterday.

However, STURDY allows the agency to override the consensus achieved by AHFA, parents and consumer advocates in developing the new performance testing requirements, Perdue notes. If the commissioners decide that the updated F2057 voluntary standard does not meet the requirements in STURDY, it could still attempt to force through its complex testing and stability rating scheme.