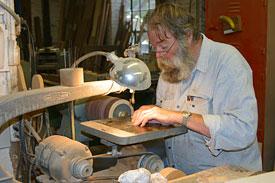 Garry Knox Bennett in his shop. The influential furniture artist died at the age of 87 in January.

Editor’s note: Influential furniture artist Garry Knox Bennett, died January 28, 2022, at the age of 87. Always creative and humorous, often profane, but ever generous as a mentor and collaborator, Bennett left far-reaching marks on art, furniture, woodworking, and metalworking. We asked his longtime friend, Scott Grove to write a remembrance.

I lost a friend and mentor today, and the woodworking community has lost an icon.

Garry Knox Bennett’s accolades are far more than can be mentioned in this article, but I’ll share a few: a 2004 Award of Distinction from the Furniture Society, he was a Fellow of the American Craft Council, and received the James Renwick Alliance Master of the Medium Award. His work is in museums and private collections around the world, and his influence and perspective in the Art Furniture and Craft fields will have everlasting effect.

His story is told wonderfully by Marc Adams in his book, The Difference Makers published by Lost Art Press.  Watch a great short video from Craft in America at the end of this article.

From roach clips to furniture
Garry’s first claim to fame had nothing to do with woodworking. It was in the early 1960s where he actually designed and sold roach clips. He created the mechanism where a spiral of wire slides up two wire prongs, like tweezers to pinch a roach and started selling them in the Haight-Ashbury hippie scene in San Francisco. By the early seventies, he had formed Squirkenworks with 60+ employees and was selling them all over the country. Bam!

During this phase, he developed a precious-metal plating process, which was used in the nascent computer industry. His company allowed him to pursue his artistic endeavors and still exists today. But his big jump in woodworking fame came after he made a Padauk display cabinet titled “Nail Cabinet.”

Garry felt the craft furniture movement was spending far too much attention to the wood and going for intricate joinery, spending far too little attention to overall design or visual excitement. After completing this finely crafted piece of furniture, he nailed a 16-penny-nail through one of the doors, hence the Nail Cabinet title. It was showcased on the back cover of Fine Woodworking magazine and became one of the most controversial things the magazine had ever published.

Although Garry was satisfied with the piece since it pushed his limits as a furniture maker, he hated it for having to explain it to those who did not get it. He broke new ground artistically with its creation.

Irreverent design
Garry’s design approach was unique. It was irreverent. He told me that he would often start with the punchline and then work backwards to fill in the joke. He said, “There is much more to making an interesting piece of furniture than just fancy wood and joinery.”

He never admitted he was a skilled master craftsman, (although he was), and nothing was off limits: materials, technique, color, and, boy, could he crank it out. He never stopped creating and while he made many one-of-a-kind pieces, they would typically be in a series with a particular theme. He’d get a design idea and run with it. For example, he made a chair a week for something like three years! Each one was unique, see here. Think about that, a unique one-of-a-kind chair every week. Astonishing.

Garry was such a generous person with his knowledge, time, food, drink, and his work. Every time I visited his shop, he’d show me what he was working on, and say, “Pick one!” I’d gratefully take a piece of his artwork home, leaving me figuring how I would explain this through a carry-on scan. “It’s art. Yes, really, not lethal, really!”

Once he sent me a solid block of cedar, just that, no note, nothing with it. A few days later he called me and said, “Scott – did you get the wood?” “Yes,” I replied. He said, “Split it.” and hung up before I could say anything more. I took the cedar to my shop, split it open, and there was a wonderful personal gift, hidden inside a pocket that he had bored out before gluing it back seamlessly together again. It was genius, and so fun.

Meeting Garry
I first met Garry in 2001 at a Furniture Society Conference in Philadelphia where we were on a marketing panel discussion, Turning Sawdust into Gold Dust, along with Michael Fortune and Mark Levin, moderated by Andy Glanz. Garry had a bottle of gin in a paper bag under the table and I watched him add it to his water on the table. Then at one point, he turned to another panelist and said, “F**k that! If they don’t like what I make, then they don’t have to buy it,” or something to that affect. I liked him instantly. Garry spoke his mind always, but behind his brash profanity there was great insight and wisdom.

His bottom line on that statement was: Make what you like; don’t make it for anyone else. And he always made what he liked. In fact, the more HE liked it, the higher the price he put on it, which is a great marketing strategy that I use to this day.

Since that memorable first meeting, I had the honor of becoming his friend and have had many wonderful moments chilling over a glass of gin, talking shop, football, art, and the good ole’ days of smoking pot while enjoying many dinners and yes, more gin.

In 2004, I gave a presentation about his life and compared him to Wendell Castle, another friend and legend we lost in the past few years. It was kind of an East-Coast-meets-West-Coast thing, and I learned a lot about Garry that I didn’t know. His story is right out of the screenwriter’s guild; you can’t make this stuff up.

Collaboration and mentoring
One of the collaborations we did was his “Woodworker’s Eraser” which for me, epitomizes his irreverence. It was a large match. We made a 1,000 of them for gifts. I still chuckle when I see this on my office desk. I was in my Garry-lookalike phase when we made them.

His house is a fanciful museum, groovy art everywhere, displaying his own work as well as a collection of many of today’s contemporary furniture masters. He had an eye for talent, too, often supporting upcoming makers and friends by buying their work, such as Judy McKie, Tommy Simpson, Wendell Castle and many more.

He also freely mentored Alison McLennan; with her he referred to himself as the “BIG Cheese” and he had several nicknames for her, ranging from “Gruntette” to “Mentee” as well as the more flattering “protégé.” Alison worked side by side with him for over 20 years, where she helped him create while developing her own voice in the art furniture world.

Garryisms
Garry had many “Garryisms” that he often said and wrote down on an old storage locker, which he insisted Alison take when he closed his shop a few years ago. She shared a few with me:

A visit to Garry’s shop
His shop: It was wonderful! Funky, eclectic, inspirational, tools and supplies scattered everywhere. Serious 3-phase machines (OSHA would have had a field day with some of them), and you could make anything in it. Wandering around in this space was like a fanciful journey into Garry’s head. I would lose myself there, and every time I visited, time stood still.

When Garry moved to this place in the 70’s, the building was next to a junkyard in a sketchy commercial warehouse section of Oakland, California. Perfect for Squirkenworks and his art studio. In 2003 they wanted to build a third story after their home burned down, but their original building couldn’t take the load. So, he built a steel structure over the whole building with the third story free standing over the top. Nuts, right?

His complete story is available in his self-published book Made in Oakland, it served as the catalog for Garry's 2001 traveling Retrospective Exhibition. Garry “signed” my copy by tracing his left hand that shows where his left pinky finger is missing, lost on a joiner. He also let me make two castings of his hand: one resides in his entrance hall and one is on the wall at Marc Adams School.

Garry’s muse
His story isn’t complete without mentioning his wife, Sylvia. She was his muse, his love, his foundation. She is a wonderful person, hardworking spokesperson, administrator. Soft spoken, with a chuckle behind every story. My heart goes out to her, their children, and their community.

I’ll be posting an interview I had with him and a tour of his shop in 2019 to my YouTube Channel. You won’t want to miss it to get a better view behind the curtain.

Goodbye, Garry. I’ll miss you greatly. Your inspiration will stay with me forever, and I’ll do my best to pass it on. F that! You are part of me.

Garry stories from other artists

Garry was scheduled to teach at a rather conservative school, I happened to visiting Garry and Sylvia shortly before the assignment. I tried as tactfully as I could to suggest he tone down his often colorful language. He did get the message - and became even more “descriptive.”

Yeah, I loved his irreverence and his ability to inspire others to follow their own instincts regarding furniture and object designs. One time he had a piece of furniture in his studio with a crack in it that was shipped back to him by one of his clients in NY. He took a sharpie and wrote "This crack OK, GKB in Oakland.” I f-ing loved him for that one!

In a word, Garry’s work freed me from convention and opened the doors to following my own instincts rather than being tethered to traditional designs. He would say things like, "I don't want to make some dead guys’ designs." That provoked a round of laughter from his students because that's what attracted most of us to him.

I don’t know if one can attach any notion of design theory to Garry’s work. It was more akin to breathing. To be near him when he was creating was to witness intensity of the moment. Free form jazz would be a greater fair comparison to his design method. He was a beat poet at heart.

Michael Hosaluk – a good friend and twirler as Garry would refer to woodturners:

“Just before I heard of his passing, I was remembering a moment when he was at a conference in Saskatoon with Judy McKie, Wendy Maruyama and Wendell Castle skipping together down the street. Made me laugh seeing Garry skipping with his entourage, skipping, something you wouldn’t associate Garry ever doing, but again he would often do the unexpected. 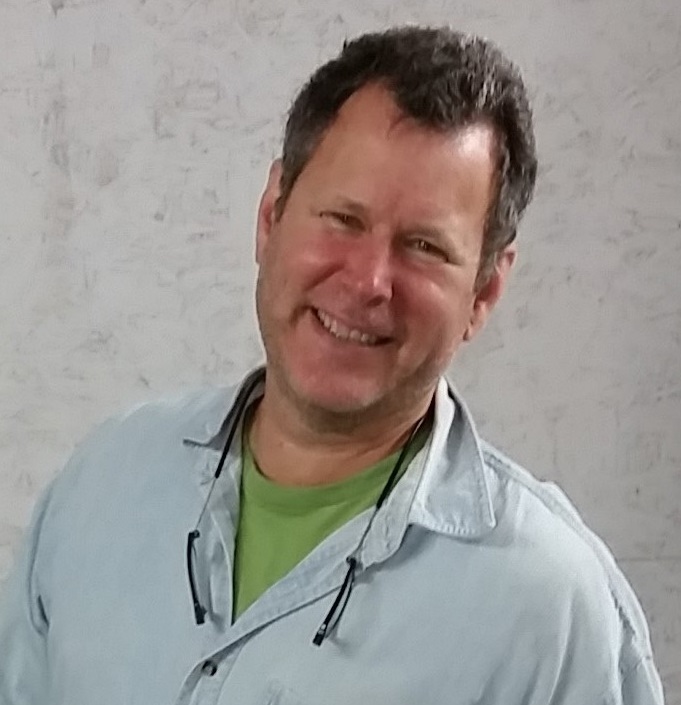 About the author
Scott Grove
Scott Grove is an art furniture maker, sculptor, and YouTube personality who selectively teaches and lectures, most notably at the Marc Adams School of Woodworking and The Chippendale School of Furniture in Scotland. Visit ImagineGrove.com and/or scottgrove.com.
As a third-generation artist, Scott Grove designs and creates furniture, sculpture, architectural reproductions, photography, murals, play spaces, interiors, films, and other art using multiple media and many disciplines.
For over thirty years he has developed unconventional methods in his approach; Grove’s large variety of work is known for layers of artistic expression. His pieces are often a combination of uniquely carved textures, radiant veneers and finishes, and found objects. His work creates a desire to touch each piece for a sensuous, pleasurable experience. Sophisticated and elegant with a touch of whimsy, his art raises a sense of wonder and delight.
Read more articles from this author 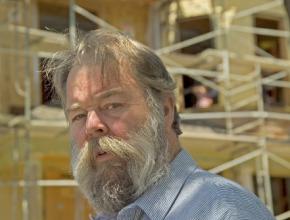 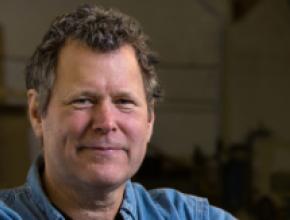 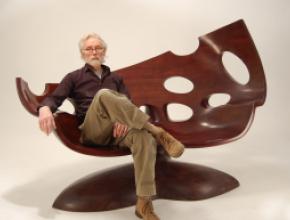 Remembrance – A wave to Wendell Castle