The Cabinet Makers Association in conjunction with Woodworking Network conducts an annual survey of the woodworking industry in the U.S. and Canada. The survey provides a clearer picture of the industry as a whole, while also helping smaller shops have a better idea of where they stand compared to other like-sized businesses.

Since the CMA serves small- and medium-sized woodworking businesses in the U.S. and Canada, the respondents of the survey fall into those same demographics. The survey is offered to the entire industry, yet half of the respondents are current CMA members.

Similar to previous years, the 2019 survey attracted more than 200 respondents in the online-only format.

This year, the organization streamlined the survey so it would take less time to complete (on average around 10 minutes). Also, the first question qualified respondents asking their role in the company. Only owners, officers, or senior management were allowed to complete the survey. However, a minor flaw was discovered in this logic which is that small shop owners typically wear many hats so the option to select “All of the Above” will be included in the 2020 edition. 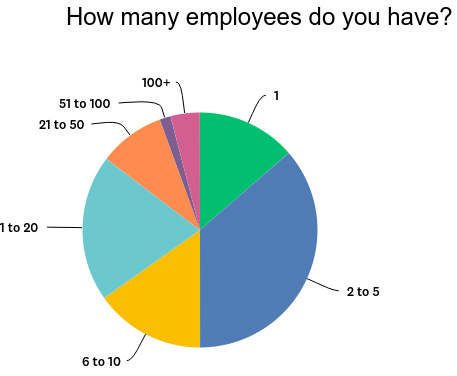 Some 50 percent of the shops who responded have fewer than five employees, yet 4 percent have more than 100.

Also, 60 percent have been in business for more than 20 years.

Overwhelmingly the respondents were located in the United States with only 8 percent from Canada. The largest representation (20 percent) within the U.S. was from the South Atlantic States, including Delaware, Maryland, DC, Virginia, West Virginia, North Carolina, South Carolina, Georgia, and Florida.

The primary market was evenly distributed between the three options of:
• Rural and small cities of fewer than 100,000 people,
• Small to mid-size cities up to 500,000 people, and
• Large cities in excess of 1 million people.

The majority of the respondents serve customers within a 100-mile radius, while 10 percent travel more than 500 miles for business.

About 70 percent of the companies do commercial work, which is interesting because the perception is that small shops primarily do high-end custom residential projects. This is significantly higher than the 2018 data in which just over 50 percent reported doing commercial cabinetry and casework.

The majority of the commercial projects were within an office environment but hospitality, retail and medical were also well represented. Almost 90 percent of the respondents stated that they do residential work. As far as the type of residential project, the results are spread across the board, extending cabinetry to every room in the home, as well as some exterior projects too. 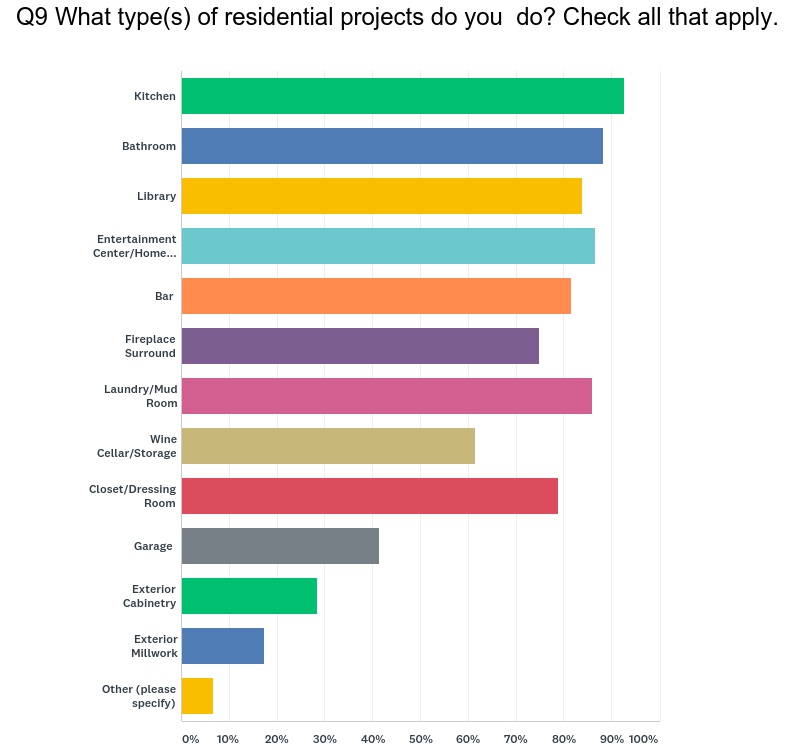 How is it made?

When asked about frameless vs. face frame construction, the results were surprisingly even with most respondents doing a mix of both. Less than 20 percent stated they do exclusively either type.

As far as assembly methods, 50 percent use pocket screws while only 7 percent use the new fastener methods such as Lockdowel, Fastenlink, Cabineo, OVVO, etc.

Almost 80 percent finish their cabinets themselves, and they use a combination of applications to do so including conversion varnish, water-based finished, 2K polyurethane, and pre-cat lacquer.

Almost 90 percent install what they make.

Only 6 percent claim they don’t outsource any part of the project. The majority of the shops use CNC equipment, and almost 50 percent have done so for more than two years. 15 percent who don’t yet have a CNC are considering getting a machine. 5 percent are considering upgrading their current CNC machine, and another 5 percent are looking to purchase an additional machine.

Of those who utilize CNC, 75 percent agree that it has added significant manufacturing capacity. Only 5 percent have excess capacity and don’t have jobs to fully utilize it.

All of the CNC owners confirm they are more profitable because of their CNC capabilities. 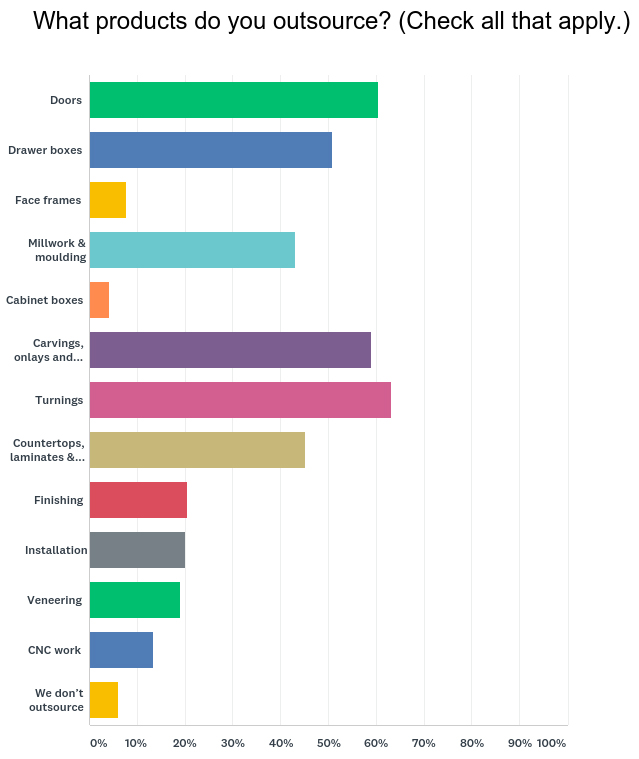 When asked about their annual gross sales, the responses were evenly distributed across the answer options. 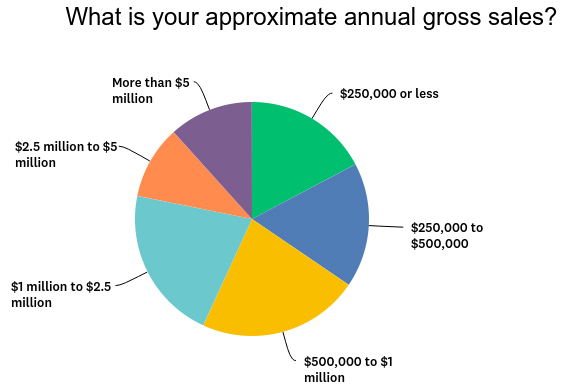 How much do they charge?

This is one of the questions that everyone wants to know the answer to; however the billable shop rate ranged quite dramatically, which is most likely due to geographical factors. That being said, the majority stated over $50 while 20 percent were over $100 per hour. 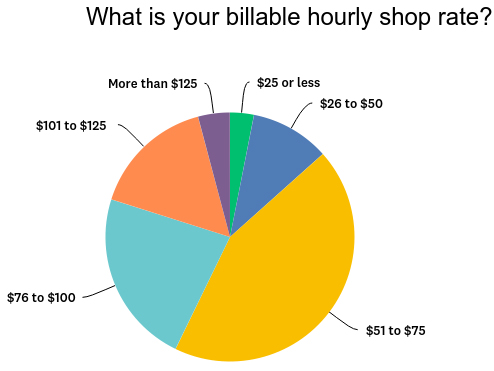 How much do they pay their employees?

This is one the questions that was seriously re-worked for the 2019 survey. The questions were divided by job type and then level of experience. Obviously, there are a great many factors that impact pay rates and it is recommended that you use this simply as a reference.

Other job types that were asked in the survey include designer, estimator, general shop laborer, shop manager, office manager, and sales. That data is available in the full report.

How much do they make?

Annual earnings for these shop owners also was a range of responses; however, the majority of the respondents make more than six figures. 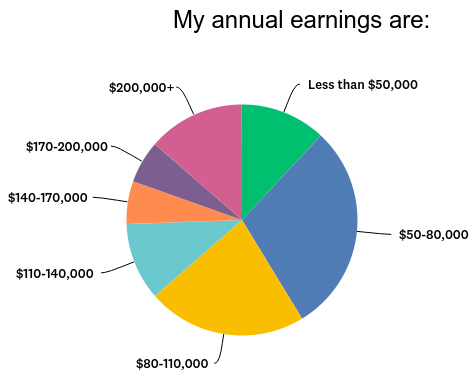 How do they market their products?

The overwhelming majority market through word of mouth and referrals. An increasing amount are using digital marketing such as their website, social media, etc. to promote their work. Not as many attend trade shows or utilize print media, advertising, or mailings.

What are their challenges?

Since finding and training employees is a nationwide concern, regardless of company size, it’s not surprising that this area is reported as the biggest concern for the survey respondents.

Only 34 percent reported that they use local technical schools as a source for new employees. When asked why they didn’t, the primary reason was there aren’t programs in their area to draw from.

What is their business outlook?

The last question is perhaps the most important one of the entire survey as it asks about the health of their business, the local economy and the future of the woodworking industry in general.

One respondent summed it up well, “We are optimistic about the future, but we have to work hard at it.” 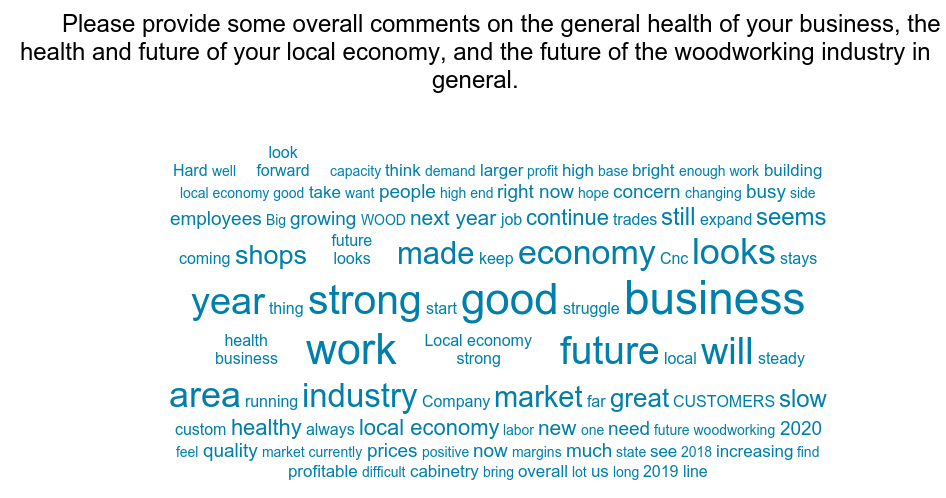 The complete report may be purchased for $39.95 from the CMA. To do so, please visit cabinetmakers.org/benchmark-survey.

The Cabinet Makers Association has been serving the needs of small to medium-size cabinet shops and other woodworking operations since 1998. The organization offers a wide range of networking opportunities and other benefits. For more information, visit cabinetmakers.org or contact Amanda Conger at director@cabinetmakers.org.