Skip to main content
Management
Find out how we almost broke our new CNC machine
By Jared Patchin
April 13, 2016 | 8:52 am CDT 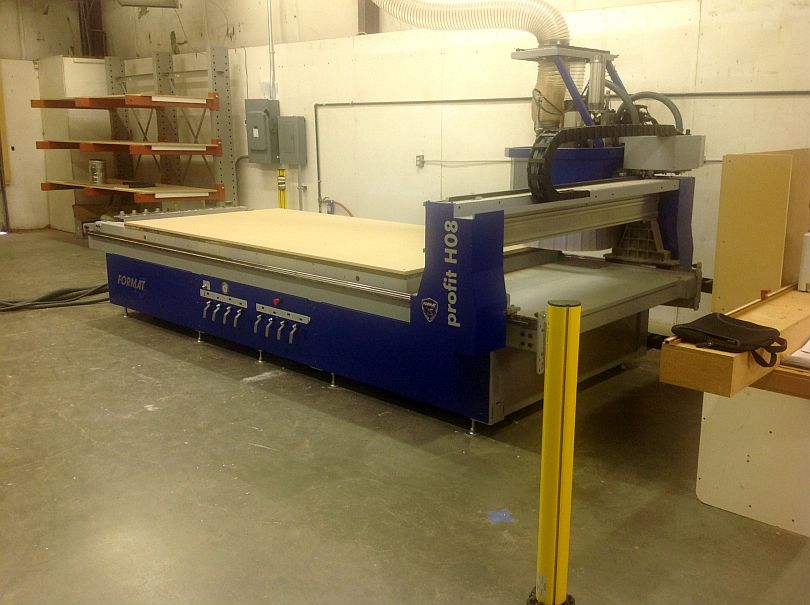 I wish I was joking when I typed out that title, but unfortunately I am not. Here is how my world came crashing down.

A few weeks ago, we broke our plywood cutting bit trying to route a piece of cherry on the machine. The wood broke loose and snapped the bit. An $86 mistake, but lesson learned. Next time we want to machine a small chunk of solid wood, we will make sure it is better secured to the spoilboard.

I called up Scott Burton at Royce AYR and ordered two more replacement bits. They arrive last Monday and on Tuesday morning I have my CNC operator remove the broken bit and install the new bit. Here is where the fateful moment happened. The plywood bit came out of the tool holder in slot #4, but he put the tool holder back into the empty slot #2, which is where our 1/2″ compression bit goes, which was currently in the spindle head.

Without realizing this mistake, he tells the machine to download the tool in the spindle head so that he can pick up the new tool holder and calibrate the z-length. Well, the machine did exactly as it was told. It tried to put the #2 tool holder into a full #2 slot. I was on the other side of the room, on the phone with a remodeler, and the unnatural sound that resulted from the metal-on-metal impact almost entirely derailed my attention from my conversation. While I was trying desperately to hold my composure and focus on my call, I was also trying to simultaneously figure out what in the world had just happened.

The spindle proceeded to drop the actual #2 tool holder to the ground, breaking the bit, and froze in position. My CNC operator, immediately realizing what he had done wrong, parked the machine, manually moved the #4 too holder to the correct #4 slot, and tried to regroup…but fate would have none of it. Our pain was not over yet!

When he executed the z-height calibration for the #4 tool holder, the machine went to pick it up, and proceeded to slam it out of the tool positioner and onto the ground, breaking that bit in the process. To add insult to injury, this was the brand new bit sent from Royce AYR. It was only taken out of the package 30 minutes prior to its death. At this point, the world was imploding for us, so we took a step back and decided to deal with our self-made nightmare later. We parked the machine and did more rudimentary tasks, like emptying the trash can and sweeping the floor, in order to build back our confidence. But before we could, the computer alerted us that the X-axis were out of alignment. Great.

I took an hour or so to collect my thoughts and calm down before I e-mailed Summeet, our tech at Felder, at 11:13 AM, explaining how we had tried our hardest to ruin a beautiful piece of Austrian engineering. Seven minutes later, he called to discuss the issue and we began the troubleshooting process. He told us that tryng to download a tool into an already occupied tool slot is one of the worst things you can do to the machine. I also remember him telling us this during the training process. The resulting stresses can cause all sorts of havoc to precisely engineered and calibrated systems.

After remotely logging in, he began by checking the damaged x-axis alignment, which thankfully, had re-calibrated itself. With one bullet dodged, we had two more to focus on. Next up was to determine if the spindle had been knocked out of perfect vertical alignment. The only way to determine this was to cut a test piece. So, with much trepidation, we installed a new bit to replace the broken bit in the #2 tool holder, manually installed the tool holder into the spindle (more on that later), and cut out a decent sized rectangle. All of the edges came out perfectly square. Dodge bullet number two…check.

The last issue to deal with was the crooked 11-slot tool positioner, which explains why the spindle had knocked out the tool holder from slot #4 rather than picking it up. With me huddled down under the spindle head, speed controller in hand, Sumeet guided the machine to the first tool holder position and stopped when I told him it was perfectly aligned.

This process was repeated 10 more times, working our way from one end of the tool positioner to the other. Originally, all 11 positions shared the same X coordinate, but the crash had knocked the tool rack 7.5mm out of alignment. Since we could not see any physical damage, and it was not loose, Sumeet chose to re-calibrated all the coordinates, one by one, rather than trying to re-align the tool rack. It was 4:30 MST when we were finally able to wrap everything up for the day, which made it 6:30 for Sumeet, who was back in Delaware.

I have nothing but good things to say about the support and help from Sumeet and Felder through this entire process. I did not have to call some 800 number, or get put on a waiting list for a call back. I contacted Sumeet directly, he responded almost immediately, and worked with us to identify and fix the various ailments with the machine.

Since the accident, we made a shrine, displaying our mistakes, for all the world to see. It is mounted on the wall, directly behind the machine, so we are constantly reminded of our slips, trips, and misses.