Held Oct. 8-10 in northern Wisconsin, the event included tours to five area manufacturers of windows and doors, countertops, moulding, dimension lumber and pre-fabricated homes. With employee recruitment and training a priority for many members, the event also included a visit to the Wood Technology Center at Northcentral Technical College. Also featured were tabletop exhibits by WCMA technology partners along with keynote presentations by Guy Bucey, director of operations at Inova, with tips on obtaining and retaining employees, and Brad Cairns, senior partner at The Center for Lean Learning and a contributor to FDMC magazine, with lean strategies to improve companies' productivity and profitability. What follows are brief highlights from the companies on tour. For information on other WCMA events, including the group's partnership with HMA for the 2019 Spring National Conference,  March 20-22 in Savannah, and the WCMA's annual Fall Conference & Plant Tour Event, visit WCMA.com. 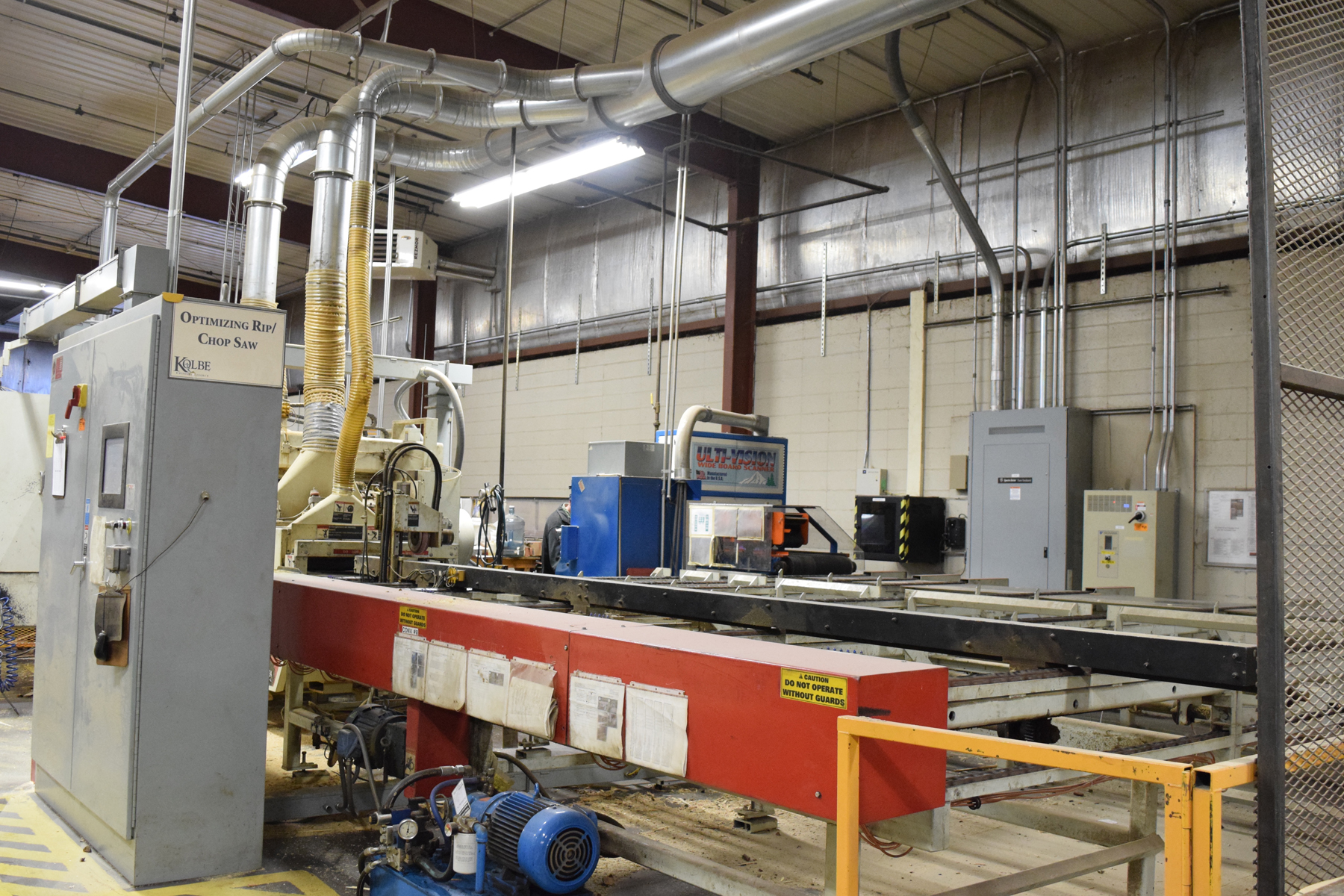 Touring the plant at Kolbe & Kolbe

At Kolbe & Kolbe Millwork's facility in Wausau, tour participants got a firsthand look at the sustainable operations in place at one of North America's largest window and door manufacturers. Founded in 1946, the family-owned Kolbe & Kolbe produces a range of products, including casement, double hung, sliding, awning and specialty windows, as well as sliding, patio, folding and entrance doors, for residential and commercial use. 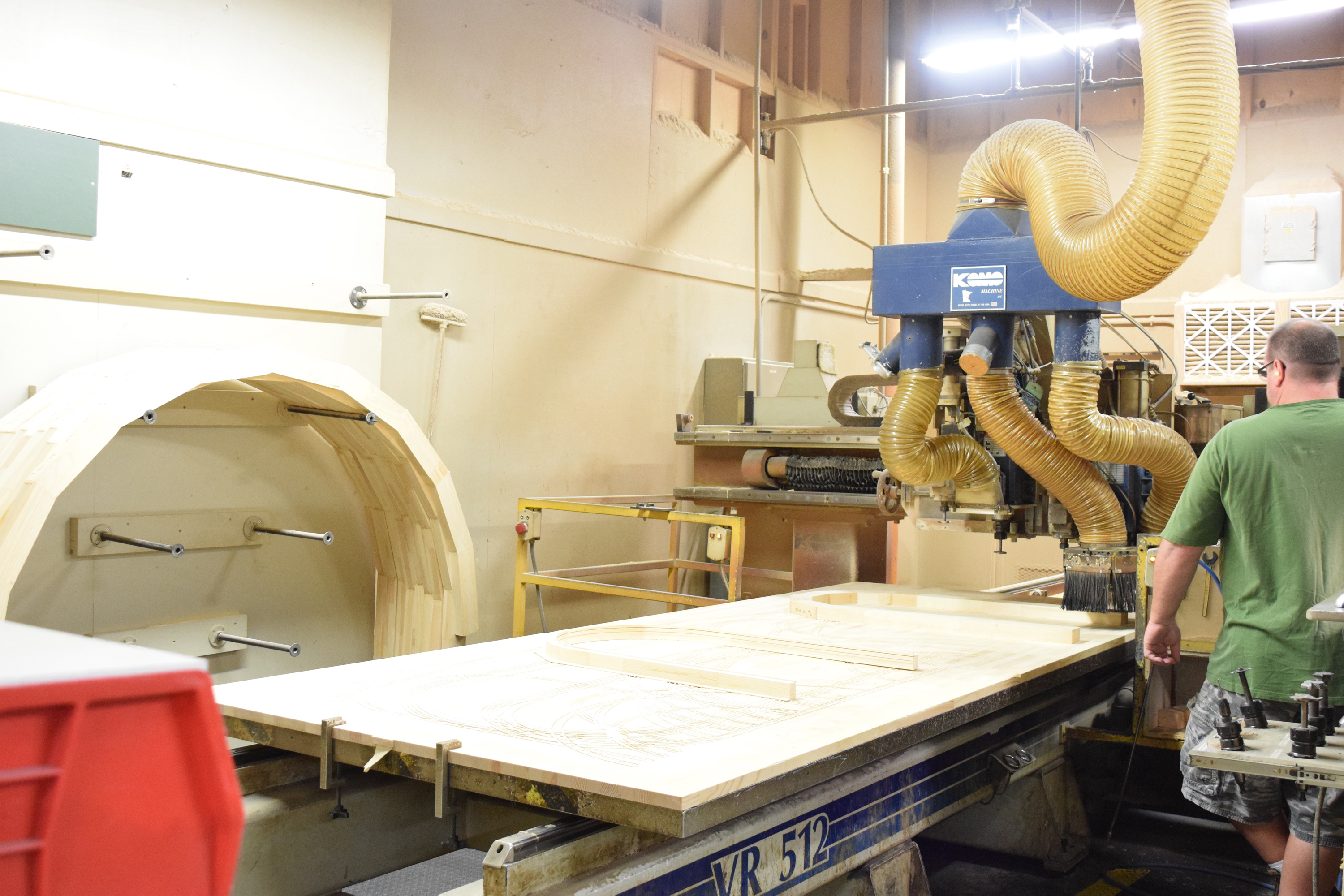 Inside the mammoth plant, the company has multiple saw lines, both scan and crayon, for cutting boards for optimal length. A variety of equipment is utilized for the operations, including Ultimizers with UltiVision scanners, Mereen-Johnson 424 saws, Ogden saws, and a USNR AddVantage rip saw optimizer scanner. Weinig Powermat and Profimat moulders machine the more than 1,800 active profiles used by Kolbe & Kolbe. Nothing goes to waste, as even the small pieces of wood are fingerjointed and used for radius and other parts. "We run approximately 2.5 million parts per year in this department," Hurst said. “Considering we’re not bulk building, that's a lot of parts.”

A combination of handcraftsmanship and CNC machining, including the use of Komo routers, is used throughout the plant. Kolbe & Kolbe also has invested in its finishing operations, which include multiple UV curing lines and sanding systems. 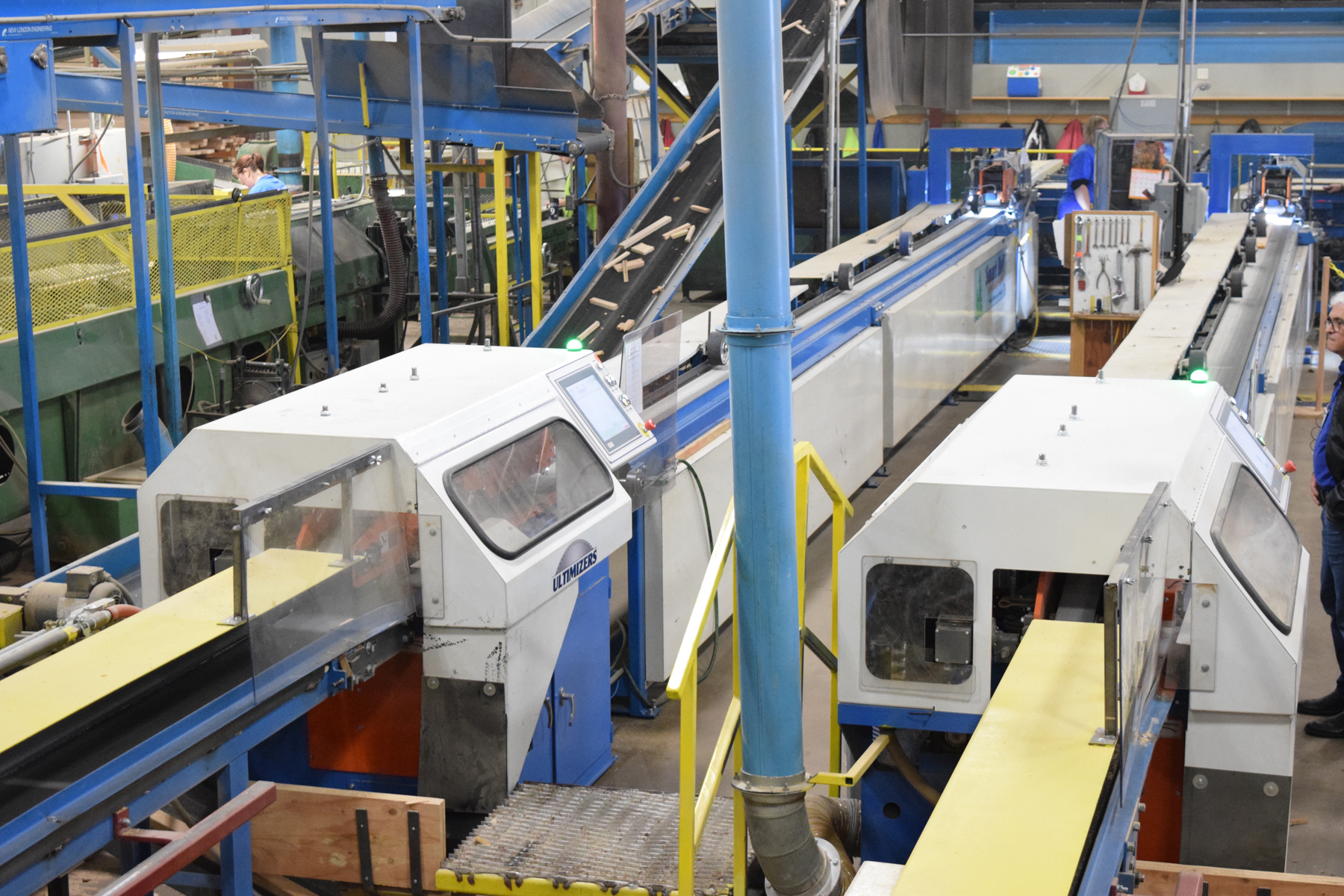 Also on the tour, Menzner Lumber & Supply Co. is a fourth-generation family owned business specializing in the production of hardwood moulding, S4S,  decorative accents and stair parts, made from a variety of species including ash, poplar, maple and alder; also available are veneer wrapped mouldings.

Founded in 1894 and headquartered in Marathon, Wisconsin, the vertically integrated company also has operations in Kentucky, Mississippi and South Carolina, with kiln facilities at the latter two locations. Menzner has an estimated 500 employees company wide, with approximately 200 at its main location. 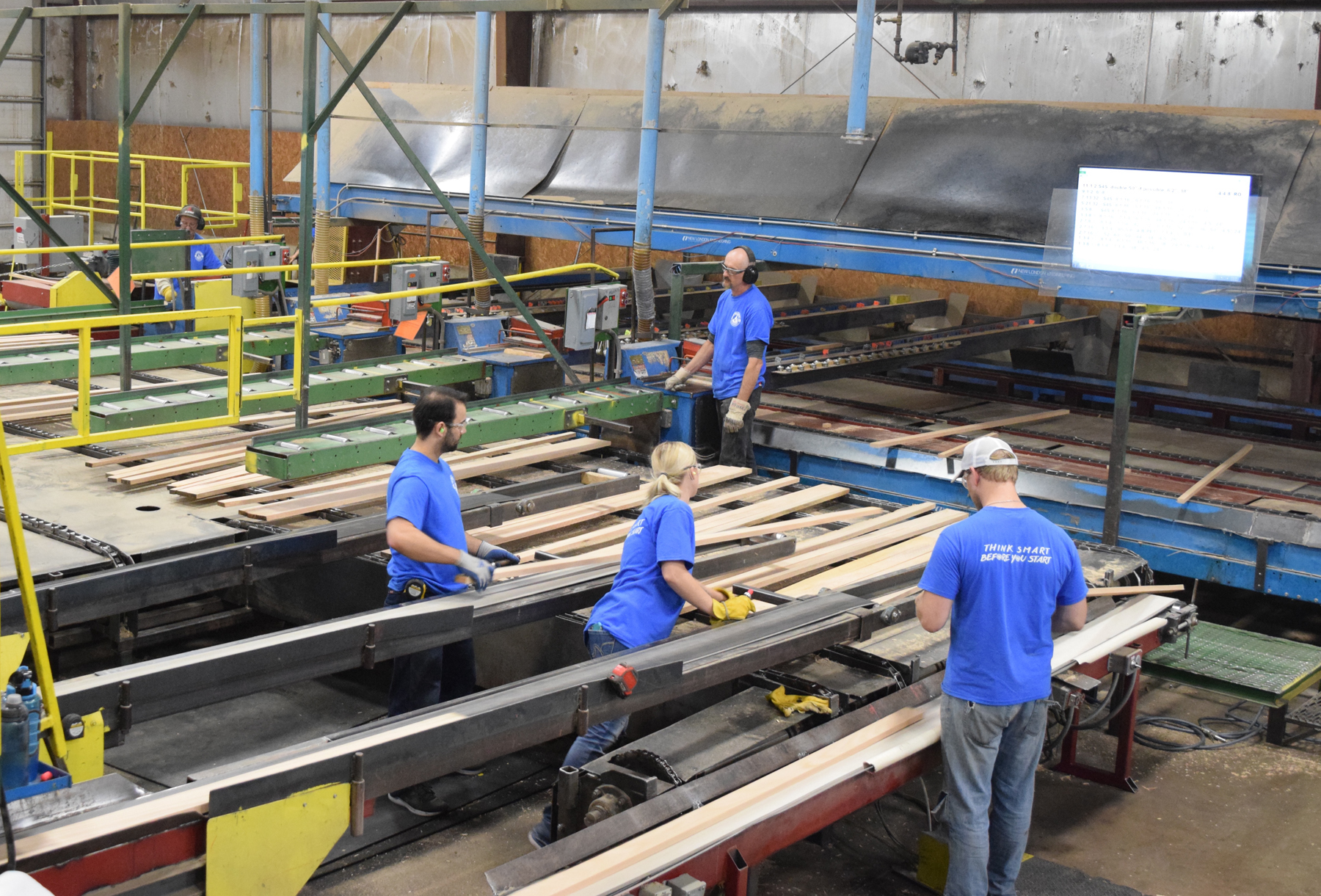 Inside the 350,000-square-foot facility in Marathon, the lumber is sent to the rough mill area where a computerized scanner rips the boards to the desired widths. An optimization saw scans for imperfections, removes defects and cuts the rip blank to length based on preset specifications. Rip blanks are sorted and stored according to width and length. The longer clear rips are machined on Weinig moulders into profile mouldings, while the mid-length rips are used for stair treads, risers, balusters and handrails. The short lengths are fingerjointed and used for other products. In addition to Barberan profile wrappers for the mouldings, other equipment used in the plant includes: Timesavers sanders, AEM sanders, RF presses, and a Rondamat grinder for tool sharpening.

Truckloads are shipped weekly to customers nationwide via Menzner's transportation division, MLC Transportation, which the company founded in 1999. 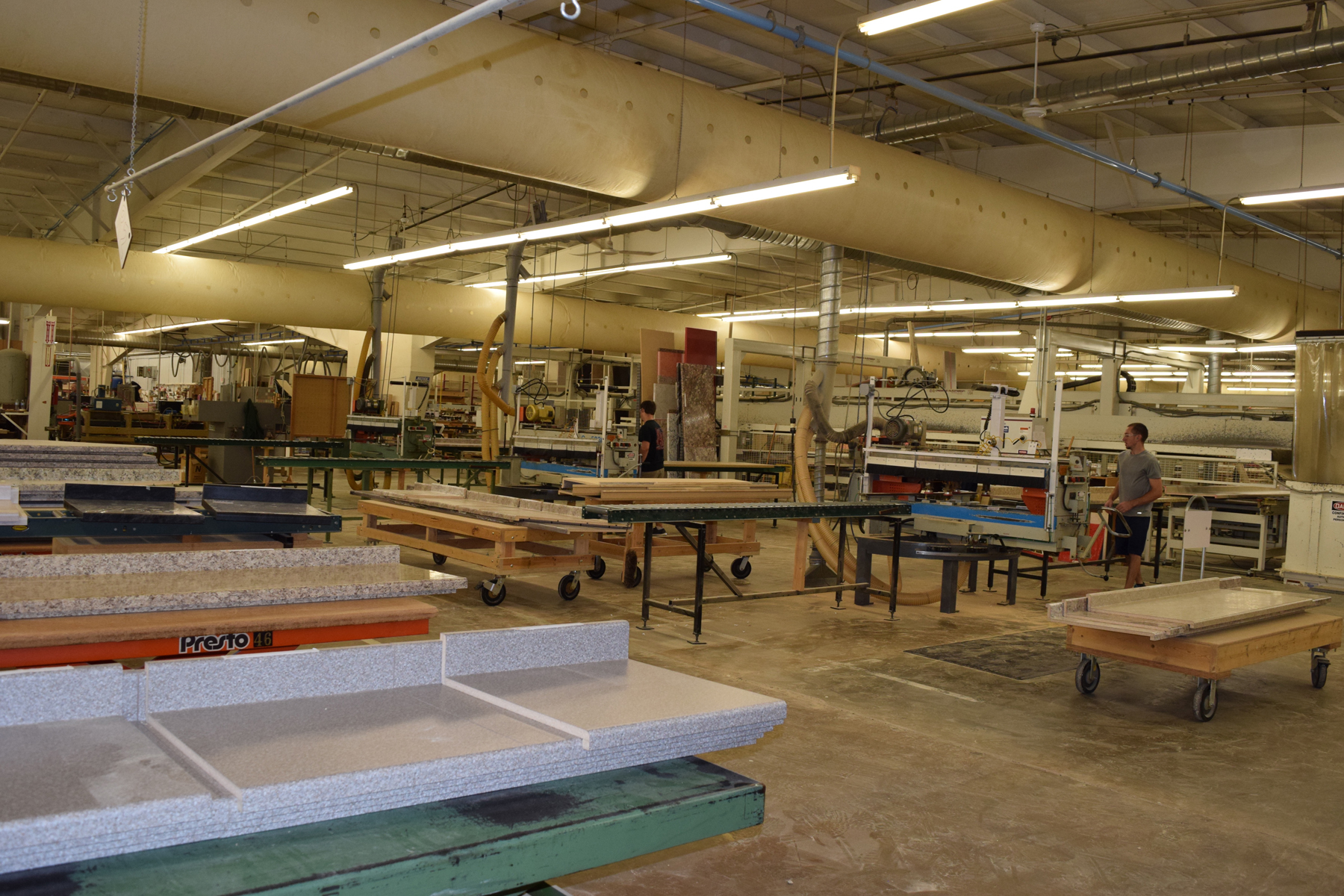 Countertop construction was on display at the next tour location, Marshfield-based Counter-Form. Founded in 1976, the company has 76 employees at the 108,000-square-foot facility.

Countertops are available in more than 300 colors and patterns, in a variety of styles, including seven postformed edges, five applied edges, butcher block and a wood edge option. The laminated countertops are constructed from a 45-pound western pine composite panel core and have a 1/2-inch solid pine scribe for easy installation. 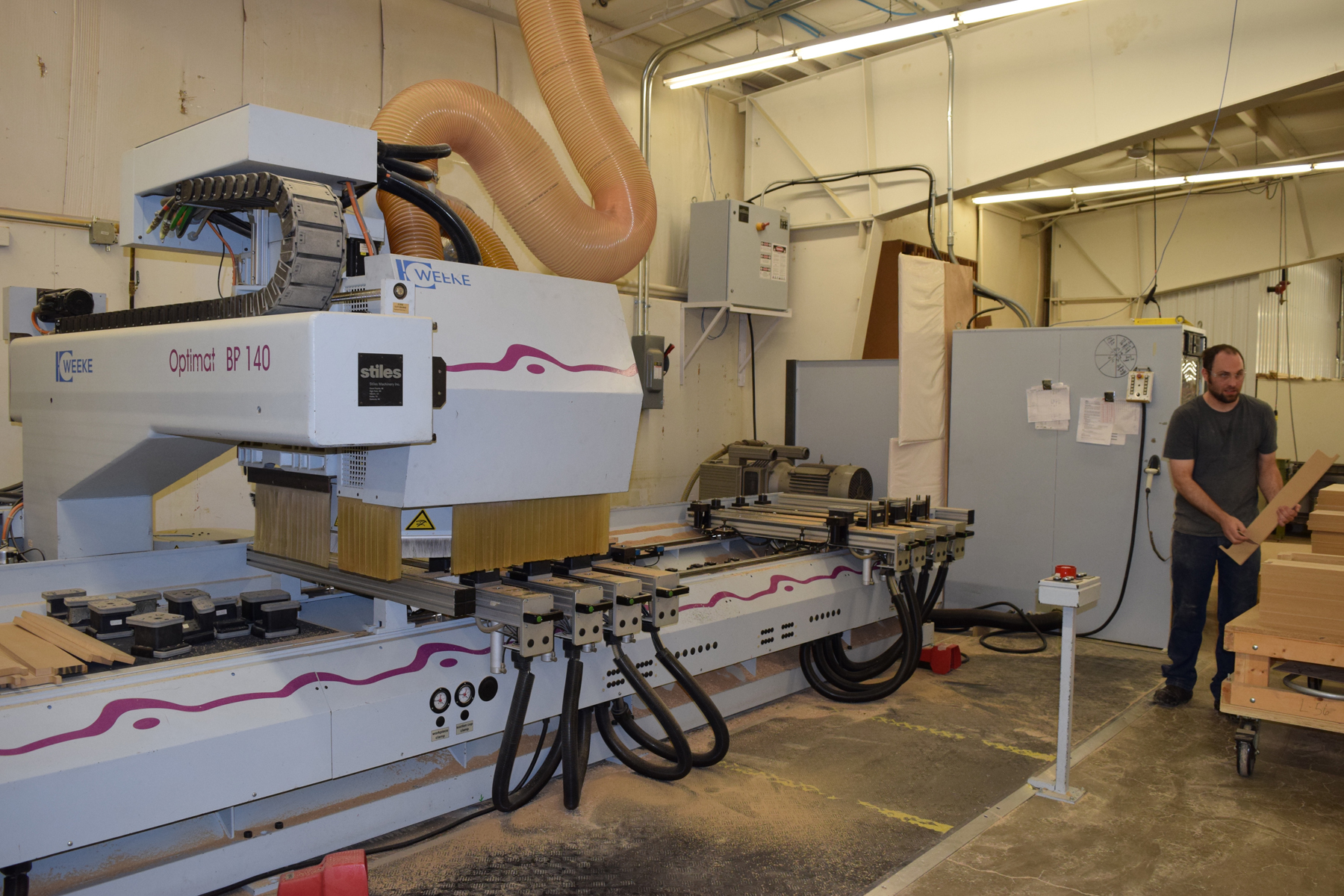 A combination of high-tech and handcraftsmanship is utilized to fabricate the custom cut products. For the manufacture of the countertops, a workhorse at the plant is the Creative Automation core builder. Other equipment used on the production lines includes: a Homag (Weeke) CNC router, Homag edgebander, SawStop saws, and Evans Midwest countertop production machines. Counter-Form also applies unique vapor barrier strips to the front and side edges.

An estimated 750 countertops are shipped per day throughout the Midwest; Counter-Form also has the ability to ship nationwide. In addition to the countertops, three types of undermount sinks, stainless, acrylic and quartz, are also available from the company. 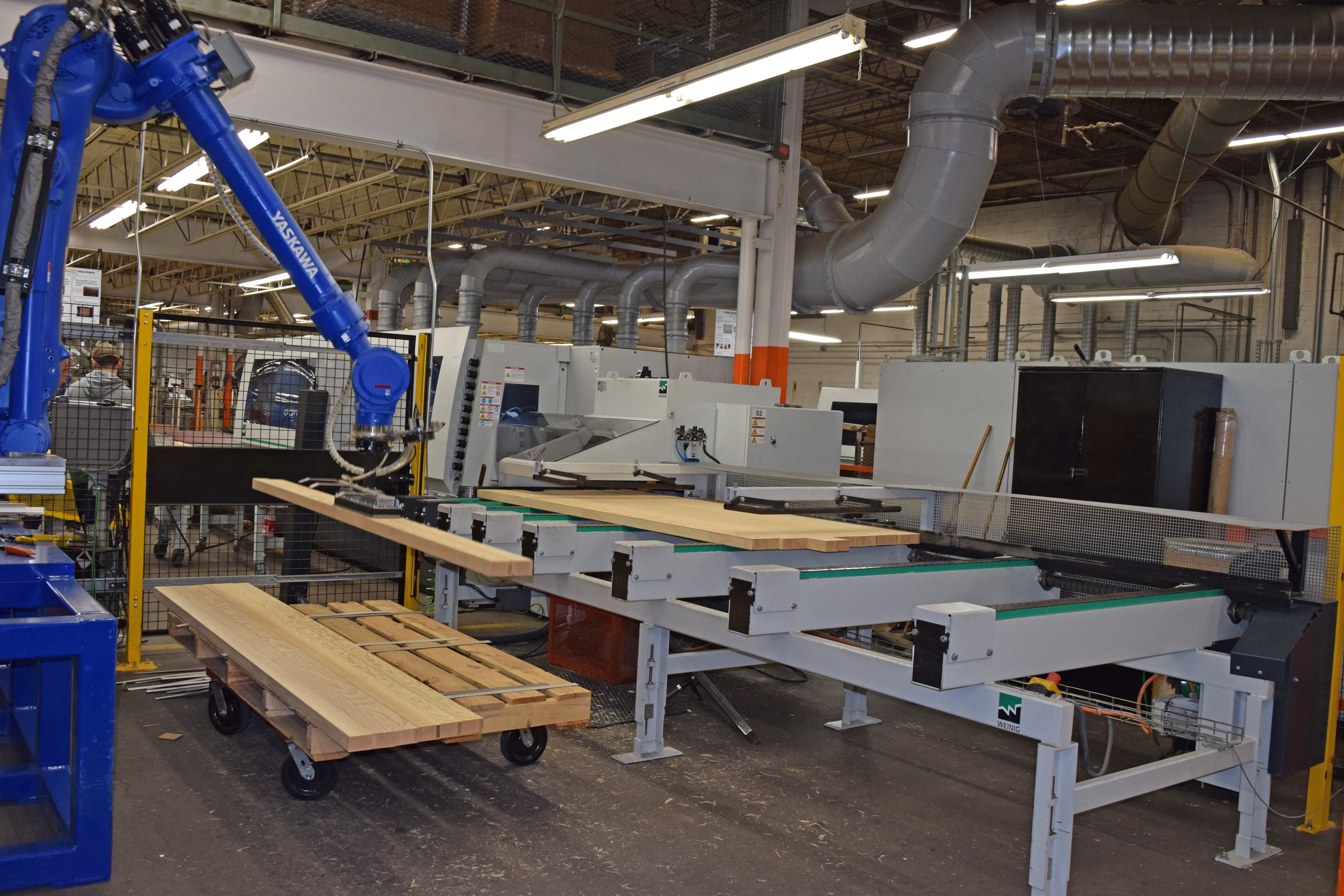 Participants at the event also had an opportunity to tour Weather Shield Doors & Windows based in Medford. Founded in 1955, the family-owned company also ranks among the Top 10 fenestration firms in the FDMC 300.

Weather Shield specializes in the production of wood, aluminum clad and vinyl clad windows, in double hung, casement, awning, slider and specialty shapes. Among the door styles produced are hinged and sliding patio, bifold and multi-slide. 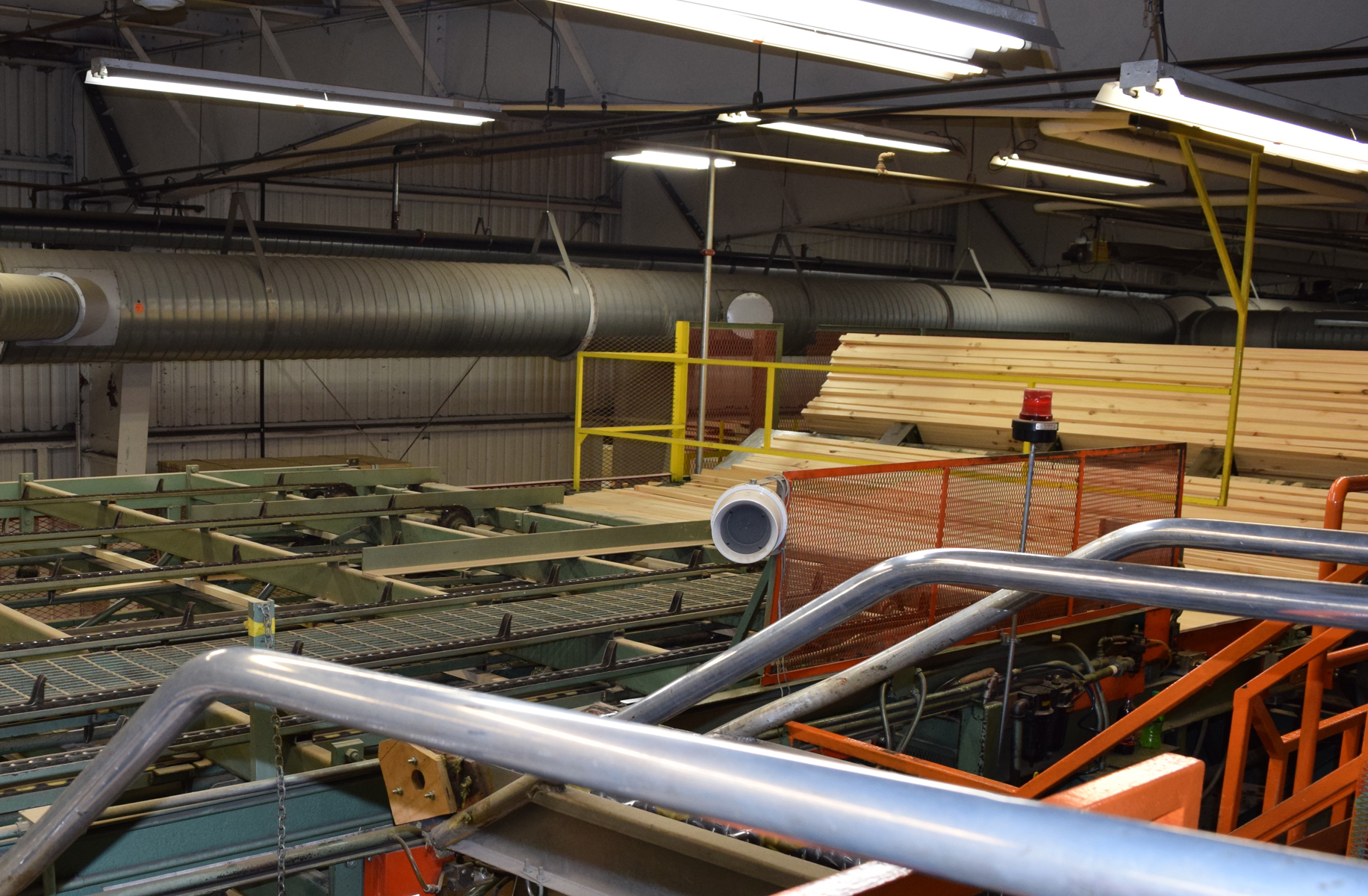 A vertically integrated company, Weather Shield has the capability to extrude and fabricate vinyl in-house, as well as cut and fabricate glass, in addition to processing wood components. Visitors to the Medford facility saw the company's lean strategies used in the Millwork division, including ripping, defecting and lumber sorting, tenoning, fingerjointing and moulding operations. Of particular interest was the company's use of Yasakawa robots used in conjunction with Weinig moulders. Weather Shield also manufactures its own skins. 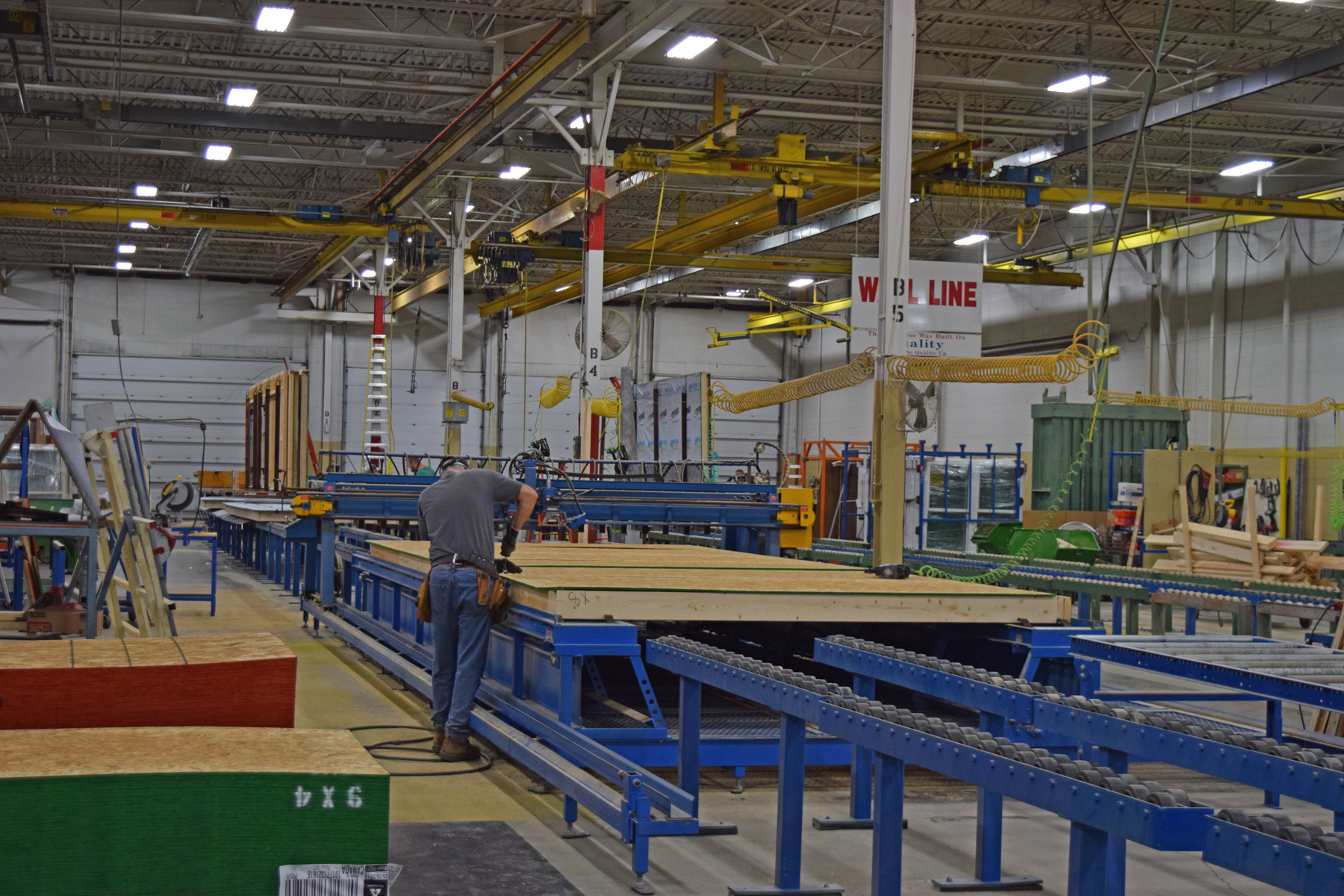 An inside look at Wausau Homes' operation

From windows and doors to whole homes, plant tour participants saw it all. Wausau Homes has been manufacturing custom single-family homes in the Midwest for more than 50 years and is considered one of the most recognized home builders in the region.

"We work with potential clients to discover what they want," Co-President Jay Schuette told the crowd. "We guarantee the home will be as you want it, at the determined price, when you want it." 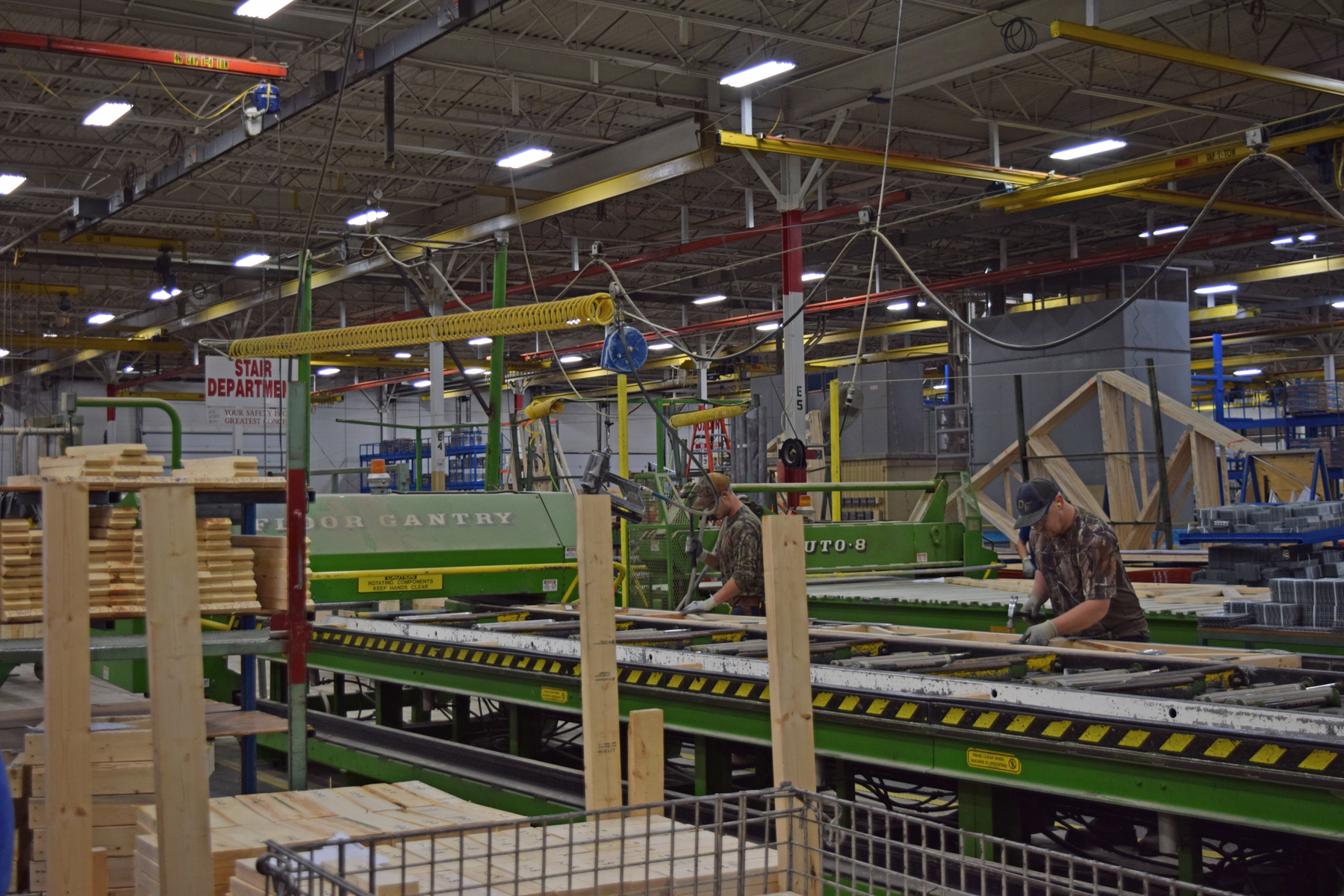 The company says its Component Construction process allows customers to customize every aspect of their home to meet their lifestyle. At the facility, the company literally pre-fabricates the framework for the custom homes from the ground up, including the floors, walls, trusses and stair stringers, in a controlled environment. Using automated machinery, Wausau Homes has the capacity to produce 50 houses per week. 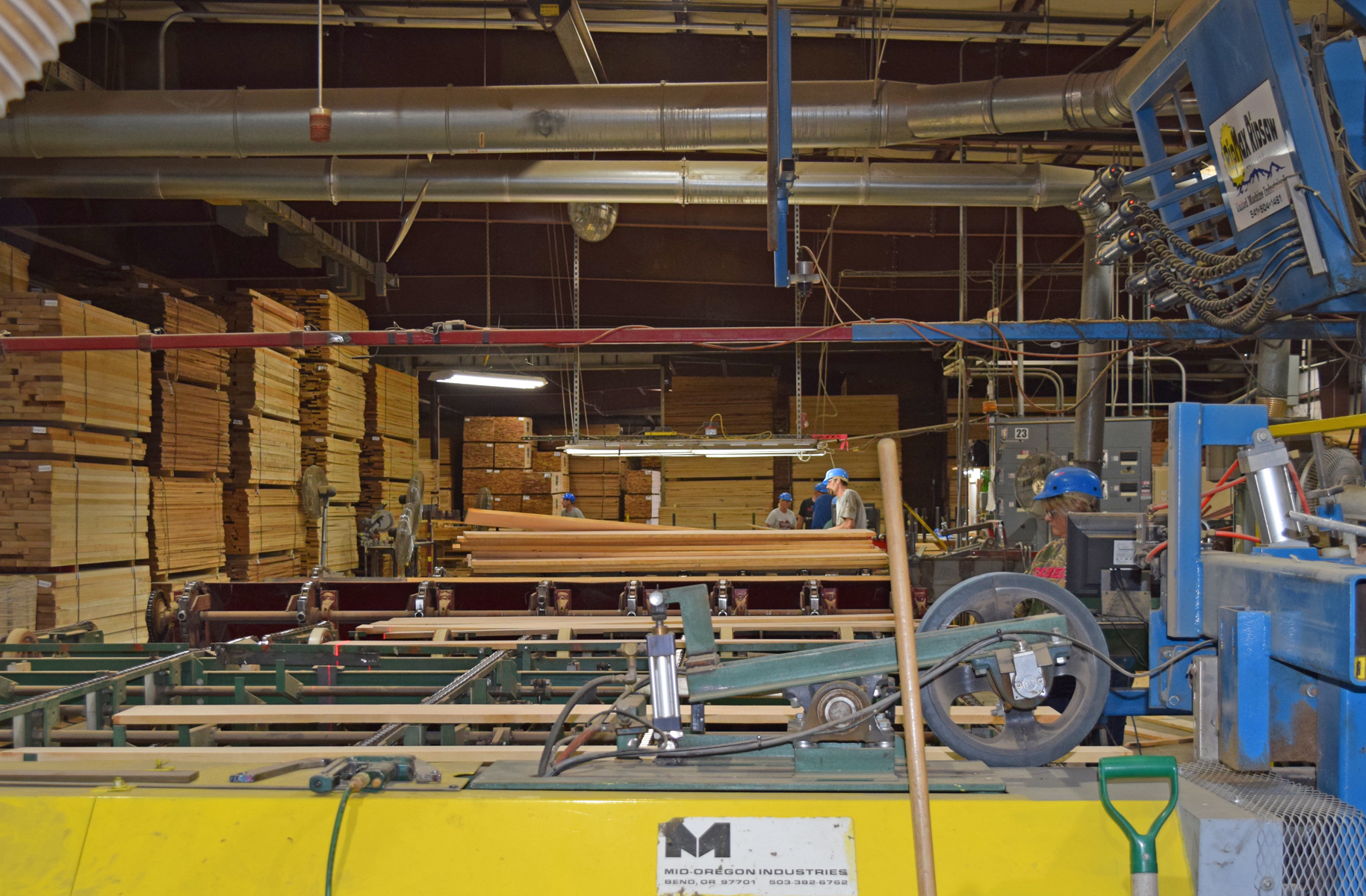 The sawmill operation at Kretz Lumber also drew lots of interest from tour participants. Based in Antigo, Kretz Lumber has 16 kilns with the capability to dry more than 13 million board feet per year.

Logs are obtained from the company's own timberlands, as well as from forestlands in Michigan, Wisconsin, the Northern United States and Canada, in a variety of northern hardwood species. The sawmill operation produces 10 million board feet per year of lumber in a variety of species including maple,  oak, ash, aspen, basswood and birch. 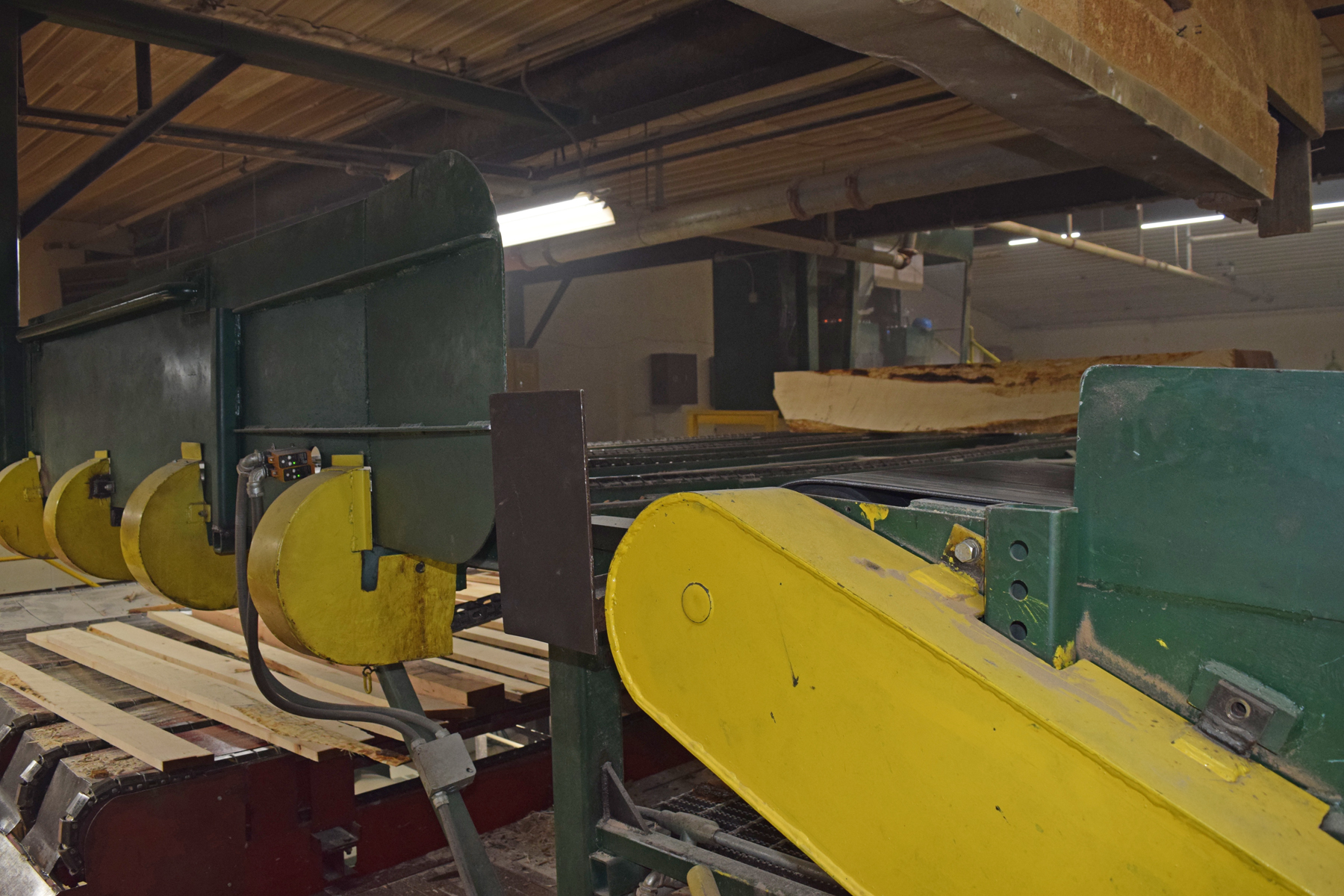 Lumber is graded by trained inspectors and sorted. Inside Kretz's 48,000-square-foot dimension facility, the company offers straight-line ripping along with custom rip and sanding programs. Among the equipment used is a Mid-Oregon system, Timesavers sanders, Rip Max ripsaw, tenoners and glue clamps.

At a sister mill, the company can slice logs for veneer, with several species and cuts available, including birds eye and curly maple, as well as flat, 1/2 round and rotary slices.

Kretz Lumber, which traces its roots back to 1929, became an ESOP in 2000. The company also has on staff seven field foresters to manage the 6,500 acres of corporate woodlands and many more privately-owned acres. The Ray Kretz Industrial forest functions as an educational resource center and highlights the company's role as stewards of the natural resources. 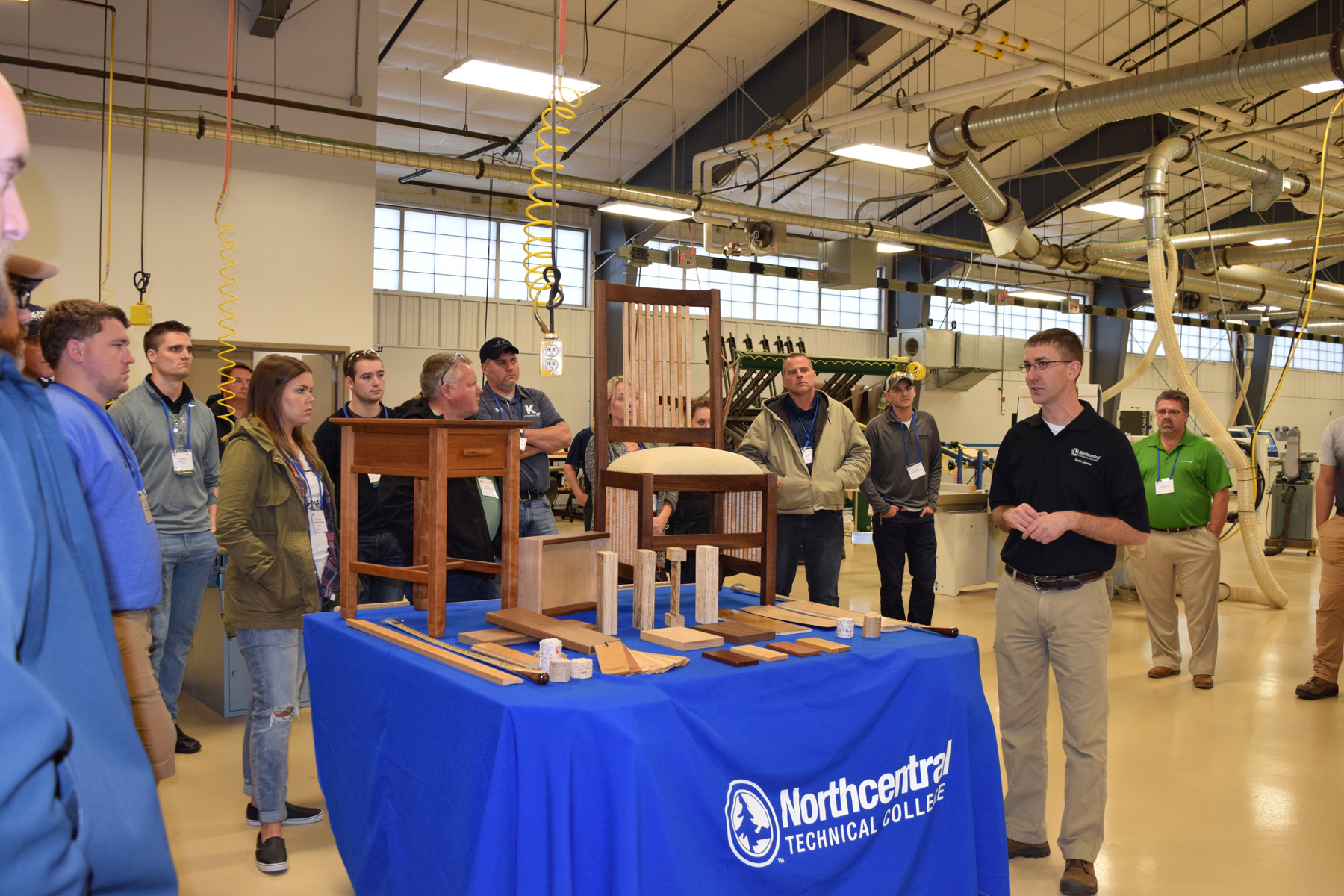 Checking out the workshop at NTC

In addition to touring the woodworking facilities, attendees also paid note to the achievements being made at Northcentral Technical College in Antigo. NTC’s Wood Technology Center of Excellence is a 27,000-square-foot facility dedicated to preparing students for careers in the forest products and woodworking industry. Students have access to $1.5 million in design software and manufacturing equipment, allowing them to learn about product design and engineering, quality assurance, material science, manufacturing and sales. Membership in WCMA is more important than ever