To say Infinite Designs president Serge Abdalian of Sun Valley, California, is detail-oriented is an understatement. He hand-draws his straight-line cabinet draftings for clients with such painstaking detail that they appear to be works of art. In fact, he is constantly drawing and tells his wife that when he’s 70 or 80 years old, he’ll draw for people.
After Abdalian has completed a closet drafting, he sends it to a 3D renderer in South Africa, who turns them into photo-realistic renderings. If you didn’t know better, you would think they were photos. 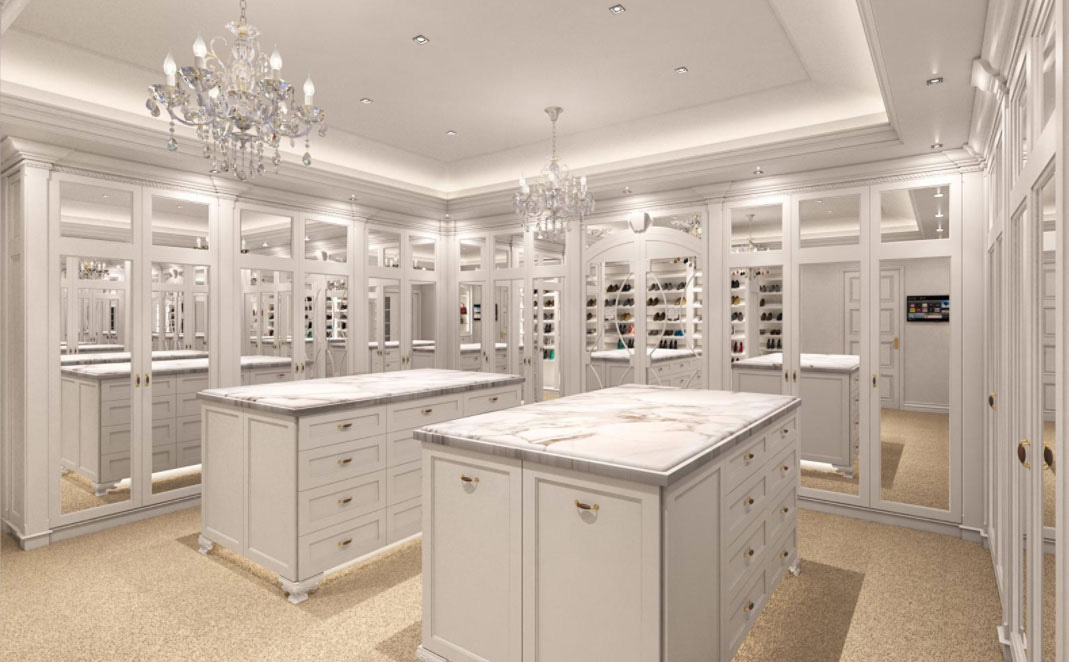 Serge Abdalian, owner of Infinite Designs, uses a 3D render located in South Africa.
“It’s so realistic [customers] can visualize it,” said Abdalian of the 3D renderings. “Before it’s built, the customer truly sees what they’re going to get.”
Abdalian, who studied architecture and mechanical engineering in England, said the draftings and renderings set him apart from other closet makers. And, he said when the 3D renderings are shown to high-end clients who are going to spend hundreds of thousands of dollars on closets, it sells his services almost instantly.
Robin Dorman of Robin Dorman Design Concepts has worked with Abdalian for years, designing the closets for clients that he then builds. “He thinks like an architect,” she said. “He’s a true problem solver.”
According to Dorman, Abdalian can take her designs and if there are problems transferring them to actual construction, he comes up with solutions.
When it came time for Dorman to bring to life the 800-square-foot closet that she had designed two years ago, she turned to Abdalian, as she had encouraged her clients to do over the years. The closet can store 500 pairs of shoes and the other items she doesn’t like to get rid of “because things always come back” in style.
“I think a lot of people who worked on this closet could not believe it was going to be a closet,” said Dorman, who was a buyer for Saks Fifth Avenue and a sales representative for Yves Saint Laurent before she began her business.
Doors and drawers in the closet even feature small oval pieces made of Lucite that are engraved to say anything from “casual pants” or “long dresses” to easily identify what is in them.
Abdalian also built a library for Dorman’s husband.

After Abdalian came to the United States from his home in England, he said he did drawings for his uncle, who worked in the cabinet industry. He eventually opened his own shop, and now in addition to closets and custom cabinetry, he is a licensed general contractor.
For Abdalian, however, no project can begin without a clear vision of what the end product will look like. He said the 3D rendering is a great tool for doing so. For instance, if the customer wonders what their closet doors will look like with mirrors, they can be rendered that way which could make them ultimately decide to go with the mirrors or to remove them.
Abdalian said it takes a total of about 2-1/2 weeks to turnaround his initial sketches of a closet, the shop drawings and the 3D renderings. He factors in two days for his initial sketches — though he said he is capable of doing them on-the-spot — one week for shop drawings, and then another week for the 3D rendering.
Depending upon the size of the project, customers should expect to pay from $1,000 to $4,000 for this phase of the work. The cost is nonrefundable to compensate Abdalian for his efforts. If potential clients are unsure as to whether they will go with Abdalian, the price increases, as he said they could take his work elsewhere.
Abdalian said he used to put his initial work into a software program like Cabinet Vision, but he since gravitated to using AutoCAD instead. In fact, during the COVID-19 quarantine, he took classes over Zoom to learn all of the commands within the software application. That way if someone is sick or unavailable to create the AutoCAD files for him, he can do it himself.
Abdalian said when he first worked with his 3D renderer about one year ago, he was pleasantly surprised at the quality of work he received from him. Abdalian sent the 3D artist his sketches and AutoCAD files and then received the rendering. “The first time around, every single detail was there and for me to say that was ‘Wow’,” Abdalian said.
Once the drawings and 3D renderings are completed and a client signs on to work with Abdalian, approving the design, the shop begins to cut the wood for the project. Abdalian acknowledges software could create the cutlists, but with his process, it’s done differently. He said if you have a good team, they can do the cutlists on their own. And his does, creating them within a couple of hours.
Inside his 5,000-square-foot factory is a Striebig panel saw, a SawStop table saw, Ritter boring machine, SCMI edgebanders, and Powermatic widebelt sander. “We have everything a mid- to high-end cabinet shop would need,” he said, though he added that it’s not so much the tools you have, but it’s how good the person is working for you.
Abdalian normally has eight to 10 people working in his shop, including his manager, who he said he has known for years. Abdalian values his staff, noting these days it could take up to six months to find a good woodworker.
And, at the end of the day, Abdalian knows quality is in the details and craftsmanship. His customers do, too. “I work with Serge because I trust him and I think his product is excellent,”  Dorman said.
For more information, visit infinitedesigns.com. Winner announced for The New Garage