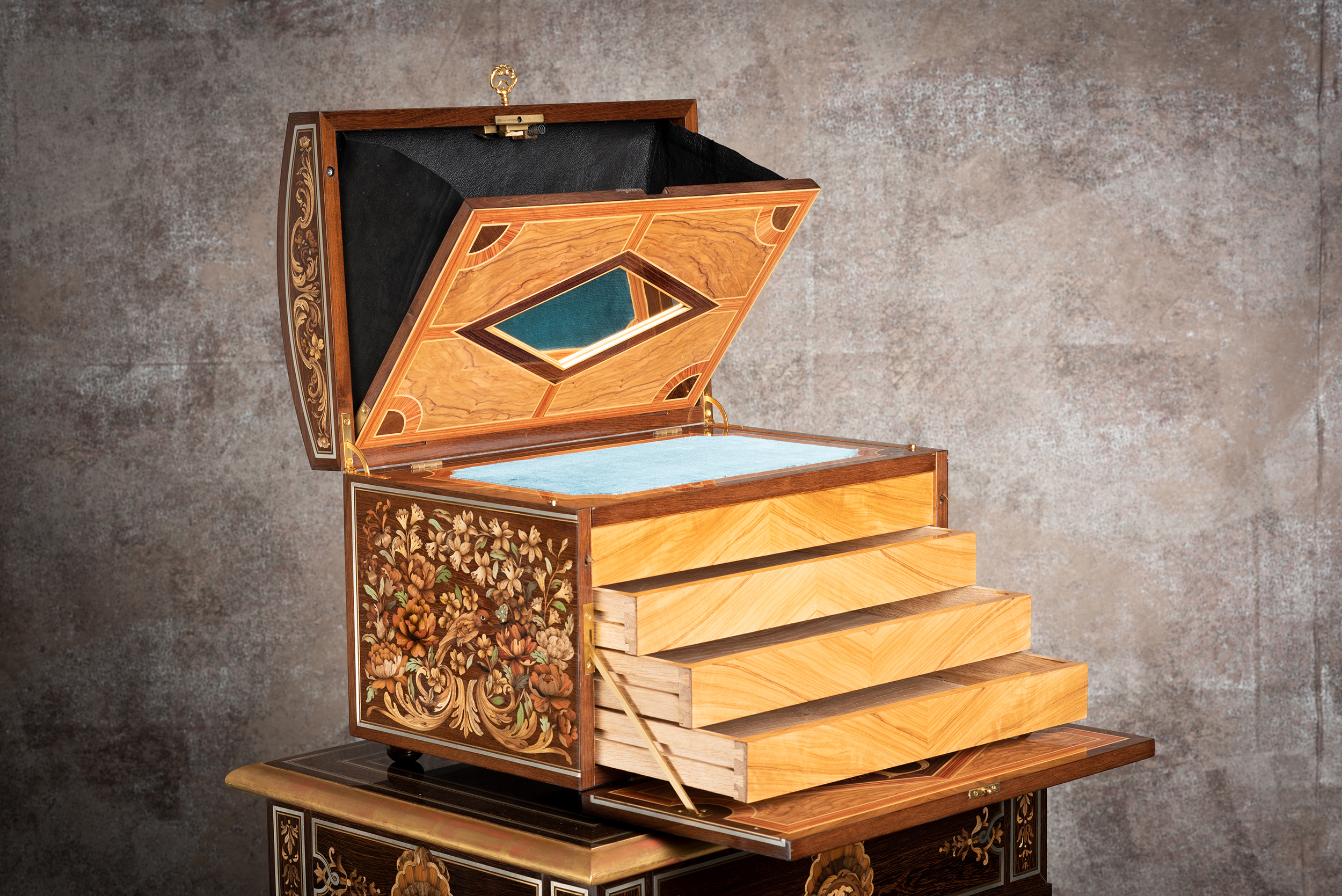 Patrice Lejeune captured the Grand Prize in the 2020 Craftsman’s Challenge with his “Treasure Box III,” which features spectacular marquetry on the outside with intricate interior drawers and secret compartments.

Time is running out to enter the world’s most prestigious competition for woodworking in veneer. The 2021 Veneer Tech Craftsman’s Challenge offers thousands of dollars in prize money in a wide range of categories to honor the best work in veneer in the world.

Grand Prize is $3,000 and other category winners earn $1,000 each. Categories include furniture, cabinets, architectural woodwork, marquetry, specialty products, and student work. There is also a special prize for first-time entrants.

Since the goal of the contest is to promote the use of veneer, there are also special prizes to honor suppliers who provide the winning materials. In addition to the Grand Prize award of $3,000, the distributor for the veneer used in that entry receives $2,000 and the distributor salesman receives $1,000 for supplying the veneer products or wood product application used.
The contest was created and continues to be sponsored by Veneer Technologies, but it the competition is now owned and run by CCI Media LLC, the parent of Woodworking Network and FDMC magazine.

It is easy to enter, but don’t delay because entries close June 7. The 2021 entry form is now available: https://www.judgify.me/2021-craftsmans-challenge.

But not all the winning entries feature historic or traditional themes.

David Lamb, a cabinetmaker in Canterbury, New Hampshire, won top honors and $1,000 in the highly contested Furniture category with his piece called “Four Seasons of Acadia.”

John Harper of EMC Woodworking in Phoenix, Arizona, won the $1,000 prize for the Cabinetry category for his humidor cabinet. Designed to pick up some of the details of a nearby pool table, the wall mounted cabinet features Spanish cedar (both veneer and hardwood), plain sliced olive veneer, gold mother of pearl, ebony, and poplar.

An important feature of the contest is the Student Design division. The 2020 student award went to James Moore, a student at Northern Vermont University. His winning “Curved Cabinet” is a wall hung cabinet inspired by the work of Rchard Scott Newman.
Moore used quilted big leaf maple veneer, gaboon ebony, and figured sugar maple. “Veneer was the only way to ensure the piece could be glued up tightly to allow the door to slide and to precisely place the rays along the top and bottom arcs,” he said. “Without veneer, the movement of the wood would shift the inlay and the alignment of the tambour door track.”

Some modern veneer projects escape the bounds of classification, so the contest features a category for Specialty Products. Last year, the winner was Dusan Rakic, a resident of Serbia who entered a veneer painting titled “Helena –Summer Theme – The beauty of youth.” The piece was made with approximately 250 marquetry wood details in veneer from cherry, Indian apple, madrone, maple, spalted maple, maple burl, and walnut.

In the hotly contested Marquetry category, Paul Schurch of Schurch Woodwork in Santa Barbara, California, a previous multi-time winner of the Veneer Tech Craftsman’s Challenge, struck again, capturing the Marquetry category with “Waldo’s Coffee,” a wall-hung tableau of coffee beans. The piece is 34 inches tall and 84 inches wide, but it also features a tiny micro-marquetry Waldo character hidden among the coffee beans.

The piece features thousands of beans, toasted edges to give depth and uses mango veneer with a koa border.
Besides cash prices, winners earn recognition throughout the industry as a true craftsperson for their use of natural veneer.

To learn more about the contest, this year’s judges, and how to enter, go to https://www.woodworkingnetwork.com/events-contests/veneer-tech-craftsmans-challenge.