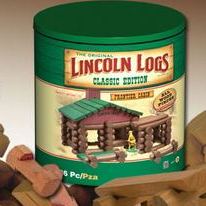 HATFIELD, PA - Lincoln Logs' owner will reshore production of its tiny logs to the U.S., now that it has found a domestic supplier in PrideSports, Burnham, ME. The logs have been produced in China for the  toy maker K'Nex Brands, which is famed for insourcing its other toy lines.

The logs are produced for K'Nex under license from Hasbro.

PrideSports manufactures wood golf tees, and reached out to K'Nex after learning of its efforts to insource manufacture of Lincoln Logs, reports the Wall St. Journal. PrideSports was formed in January 2003 from the merger of Pride Golf Tee and Softspikes, producers of solid hardwood golf tees and golf cleat lines. The golf tee business traces its origins to 1930, when Fletcher and Gene Pride founded the Pride Manufacturing to produce wooden mouthpieces for cigars. In 1956 the operation to Guilford, ME, to be closer to the source of its hardwood raw material. Soon after Pride began producing golf tees as its second product.

Pride says it is now the world’s largest manufacturer of wooden golf tees, using state-of-the-art technology to produce billions of tees per year. Pride says that attempts by competitors to substitute plastic or composite wood on golf tees have not been successful.

K'Nex, which prefers to manufacture in the U.S., refashioned its Tinker Toys line from wood to plastic, allowing production to return to the U.S., though not to the secondary woo

"In the long term, it's much better for us to manufacture here," Joel Glickman, chairman of K'Nex, told the newspaper. Originally made of redwood, Lincoln Logs were invented in 1916, by John Lloyd Wright, son of Frank Lloyd Wright.