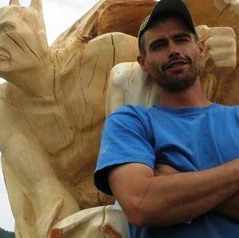 Seattle-based custom woodworker Thomas Earing operates Re-Evolving The Chizel - spelled with a Z instead of an S - producing  commissioned carvings and designs in stone and wood, as well as custom furniture.

Earing, 31, a Colorado Springs native, has gained a bit of social media buzz for the 6.2 million views earned by his Batman carving on Reddit.The attention will help him sell even more of his projects, which range from $300 to upwards of $20,000.

A sideline to Earing's Re-Evolving The Chizel business is a traveling wood carving showcase, in which Earing stages a roadshow with 5 other woodcarvers to compete against each other, with finished artwork auctioned for charity.