Skip to main content
Technology
Bolt-on-neck Skidplate guitar is the first of its kind in the world
By Mastercam
July 21, 2020 | 11:57 am CDT This article was submitted by Mastercam
Worldwide, and for nearly a century, the electric guitar has been offered in thousands of shapes, models and materials, with twice as many add-ons, accessories and options. For combinations that are exponential. Add to that, the personalization factor:  For most players, one’s guitar is an instrument – and reflection – of one’s individual style, choices and preferences, as well as an extension of their being. In the end, though, finding the right guitar comes down to some very simple criteria: how well the guitar sounds and feels.
That’s something Anthony Bragg, owner of Madtown Guitars, knows all too well.  In fact, that understanding helped guide Bragg’s decision to start his own company designing and making what are perhaps the music world’s favorite stringed instruments. With an extensive background in the industry and a strong desire to innovate, Bragg started Madtown Guitars in 2015 in a garage in Madison, GA. Previously, he had worked in machine/tool and die shops and was eventually hired into engineering for guitar-maker, Gibson, for a decade during the early 2000’s. He has also worked with what many consider to be premium custom guitar maker, Teye of Teye® Guitars.
Today Madtown is designing and making guitars from the ground up. They currently offer two models, the Railrider and the Gravelcaster. Both are six-string electrics, custom in nature and, according to Bragg, “100 percent hot rods”. It was actually an idea Bragg had about a single part of the electric guitar – the neck plate –that sent him on a riff to starting his own company. (The neck plate connects the neck of the guitar to the body of the guitar.)
“As far back as I could remember, the neck plate of a guitar was always a flat piece of material with four screws in it,” Bragg said. “I remember thinking, ‘Why?’ What if I could design and make an ergonomic improvement on that piece?” Certainly, he recalled, he wanted to design and build whole guitars, but by changing this one piece, he thought, he had something that would set him apart.
Bragg’s Skidplate did just that.
“We used the Skidplate as the launching pad for our guitars and designed around that idea,” Bragg said. He explained how he originated his own guitar shapes and other proprietary components and designed the guitars’ body contours to accept the new neck plate. “This new neck plate system offers unparalleled upper register comfort and reach on the fingerboard.” 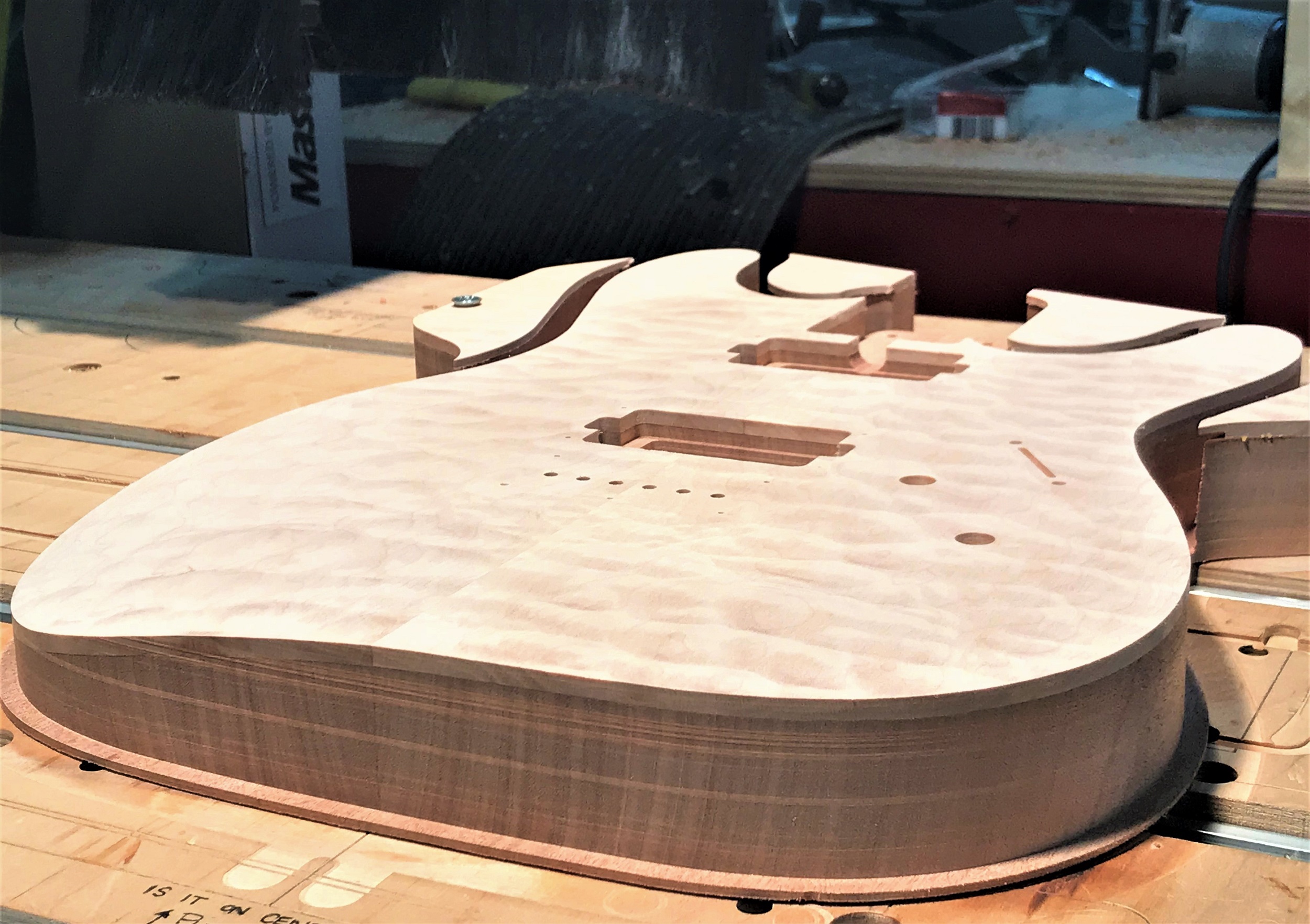 Madtown has multiple patents on the Skidplate. According to Bragg, “The Skidplate is the world's first and only 3D ergonomically advanced bolt-on neck plate and sculpted body contour system of its kind” and is standard equipment on all of the company’s Guitars. Bragg calls it, “the heartbeat” of his company. But there’s another piece that Bragg will tell you about that is central to Madtown’s success. His CAD/CAM software has helped him enormously with the Skidplate as well as with the design and manufacture of his electric guitars. 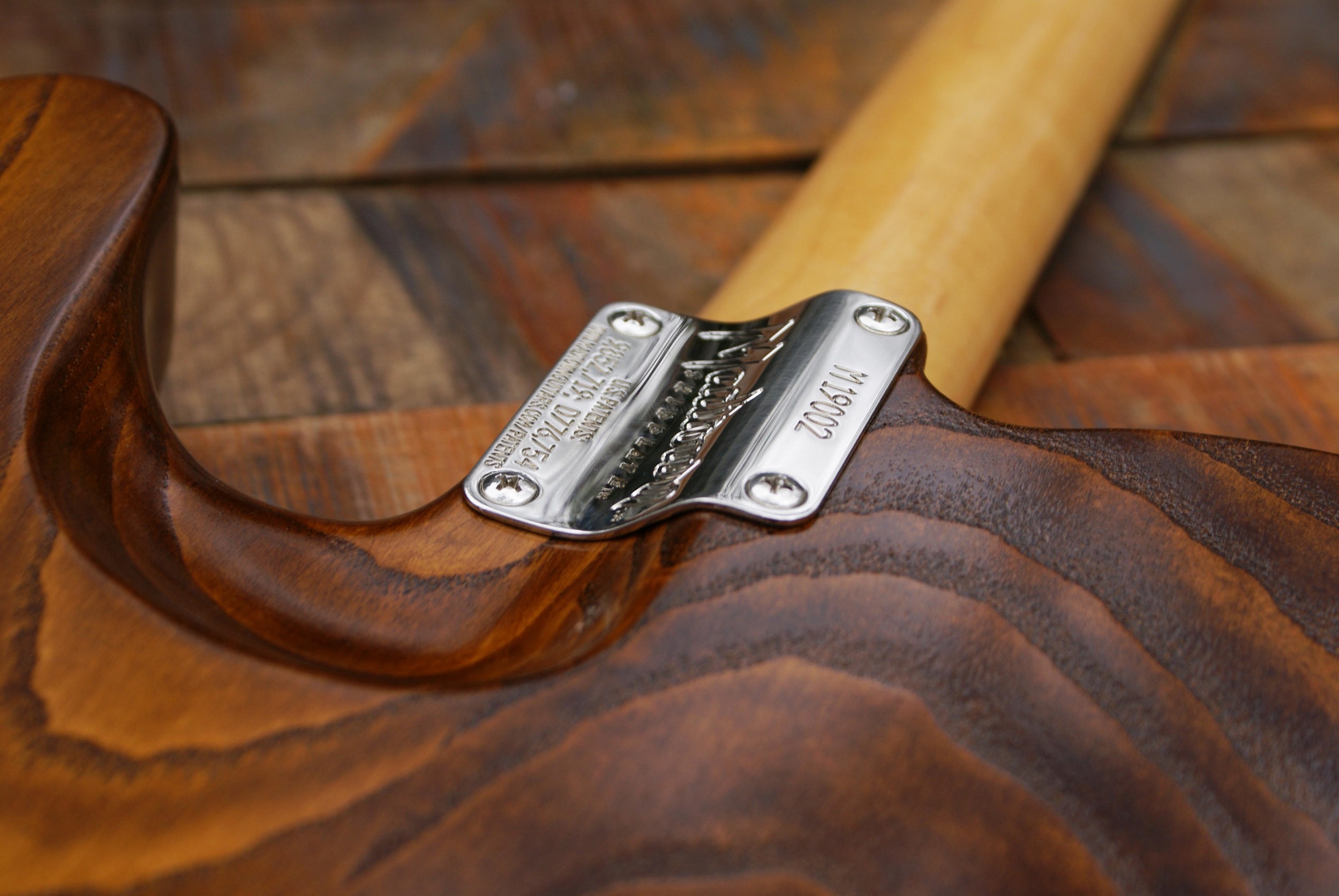 “While working at Gibson, I saw how beautifully Mastercam (CAD/CAM software, CNC Software, Tolland, CT) handled fixturing, custom work, one-offs, and engraving. It was a no-brainer for me, when I started moving in my own direction, to not only take what the software had to offer but to absolutely incorporate it as much as possible into everything we do at Madtown,” Bragg said. “I spent more than considerable time on the design of the Skidplate itself, hand-making prototypes just to find out what angles, what distances, what feels best and what is most ergonomic. I started drafting and programming in Mastercam, making full-on prototypes and putting them on actual guitars. Some changes were needed, but it was all so easy because everything was in the software. I made the edits I needed to make and, boom, I was off and running.” 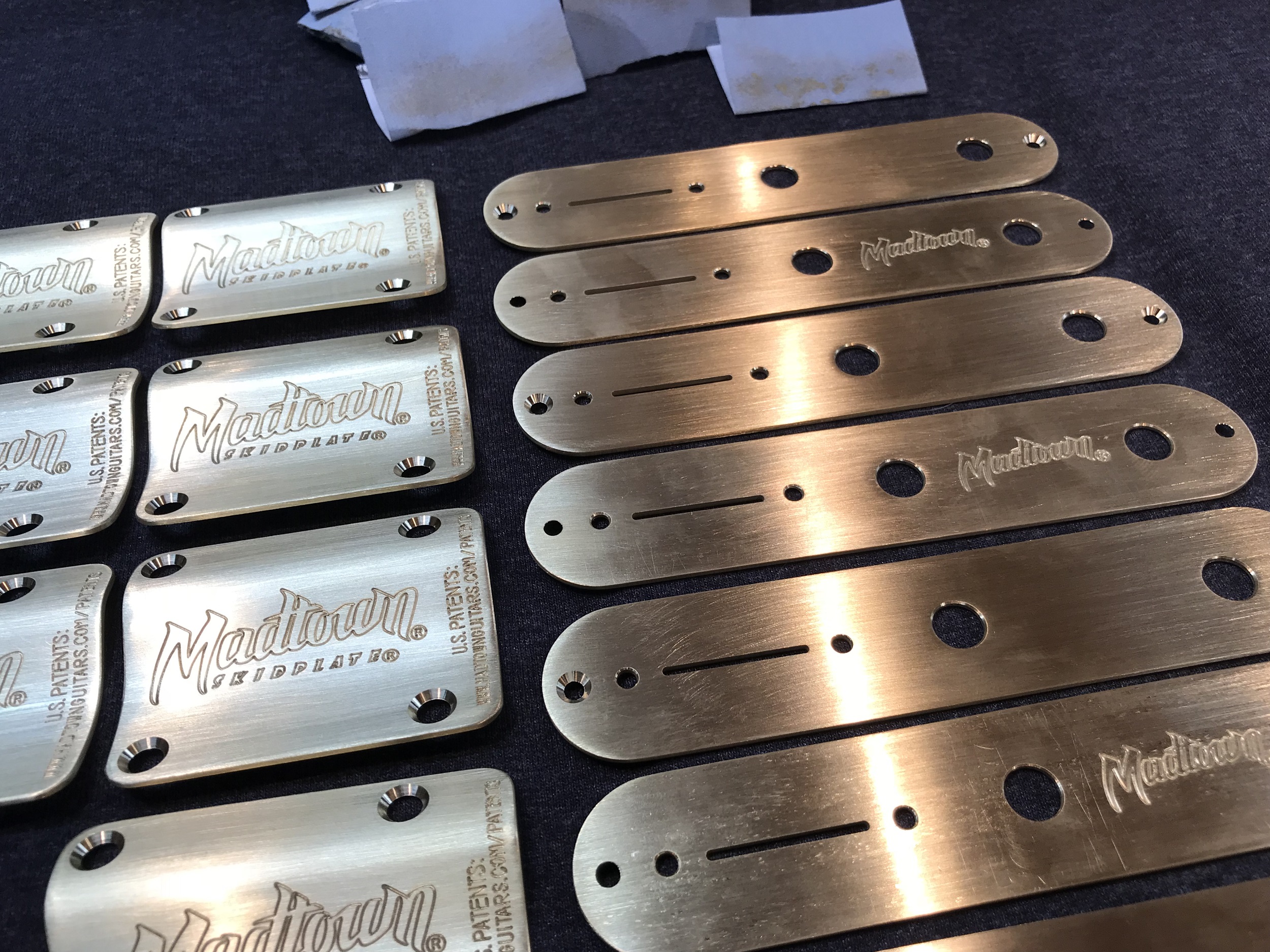 The CAD/CAM software is integrated into nearly every process they do, and at each step of making parts. Bragg does all the programming himself with one seat of Mastercam Mill controlling a Laguna CNC router. “When you mill high-precision parts, you also reduce some of the handwork that is required to build premium high-quality instruments. The guitars are still very much hand-made and finished, but starting with cleaner, more accurate parts certainly helps. 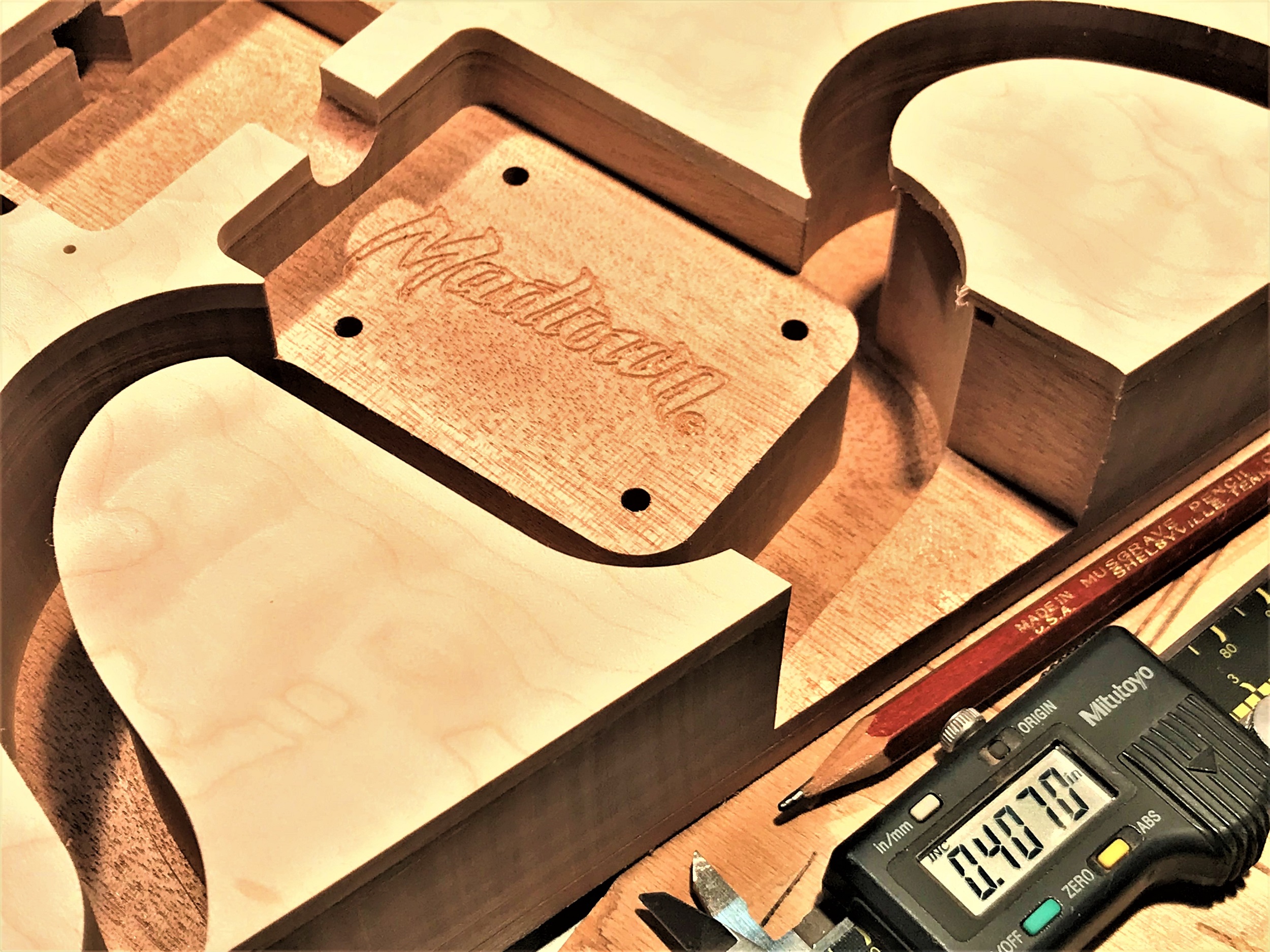 “Being a one-man shop, being familiar with the software, being able to program to where I can step away and execute the program to make the part on its own, while I go off and do other things - It’s like having two employees working with me,” he quipped.
Bragg works in Mastercam Surfaces for all the contours on his guitars. He called the software’s modeling or surfacing “very user-friendly”.
“We use Surfaces for the arm contours, the tummy contours, the neck plate contours. Sure, putting in a contour is one thing, but to going back to add a particular radius on that edge and being able to machine all of that is sometimes a huge advantage over doing things with a rasp and sandpaper.”
About Mastercam’s Surfaces /Modeling feature, Bragg is clear about the software’s value.
“One of the simplest things the software has is the ability to leave stock. You can leave just a couple thousandths or a half a thousandth of stock. And, you can also change that to a negative number – to take off more stock. But you haven’t changed your drawing. You’ve simply told the software, ‘Hey just leave a little or take a little’. It will automatically update the post to do so.
“It’s one of the most brilliant aspects of the software for a lot of what I’m doing because, for example, when you carve a back of neck radius, it takes a lot of time to set up in that surface, or for that model. Should you need to change something, you can affect the outcome of the part inside Mastercam and never change the model.”
Bragg also digs Mastercam’s Dynamic Motion toolpaths for a host of reasons, he said.
“I can keep the tool constantly engaged with the material and keep the router running at optimum speeds and feeds.” “For Madtown, less air-cutting means shorter cycle times” and “constant tool engagement means less wear on the tool and the machine,” he said.
Bragg said he uses Mastercam’s Tool Library on an almost regular basis, though he has added some of his own tool definitions for the custom carbide tooling they need. Bragg said, “Once the tool library is updated and everything is set up, it’s just, ‘Grab a tool and you’re off and programming’.”
In addition, all of the fixturing Madtown needs to get done is designed, drafted and executed in the CAD/CAM software.
“The fixture game is really never-ending in our line of work because there’s always a need for either an update of a fixture, the need to modify it, or even a new fixture,” said Bragg.
For the Skidplate, alone, he said, there are multiple fixtures, including one for machining it, one for engraving, and one to cut the form that actually bends the plate to its three-dimensional final shape. They also use a fixture on the CNC machine for boring the jack hole that goes into the side or the rim of the guitar (where the guitar cord plugs-in), multiple fixtures for different pick guards and more fixtures for carving the back-of-neck radius. (There is separate fixturing for each of Madtown’s guitar models.)
“The software not only changes the way you think, but it elevates the way you think, so you can apply it as a tool – in and of itself – to your process or your approach. In my case, Mastercam is responsible for nearly every process and the way I approach it. The software’s really a lot more powerful than just a couple of toolpaths.”
Of course, Madtown is using Mastercam for the guitar part that started it all.
“The Skidplates are made out of a very high grade of brass. They come in as flat sheets. We use the software to cut them out into their final shape, have one fixture for the through holes and one to engrave the serial numbers, the patent numbers and our logo into the plates themselves.”
When it comes to customer service and support, Bragg suggested that there hasn’t been much needed, but he seized the chance to laud Mastercam Reseller, CAD/CAM Solutions (Snellville, GA).
“We worked out my post issues and other things pretty early on,” Bragg said. “When I do call, Brian Kadow and Steve Landkammer are on top of it in a split-second. There’s not been one problem they haven’t been able to resolve, and they have always done so with the best attitudes in the world.”
While “feedback” is something most electric guitar players try to avoid, at Madtown, it’s always welcome.
“So far, the response to the Skidplate is that it is ‘second to none’,” Bragg said. “Being early in start-up, we haven’t gotten a ton of feedback yet, but a hundred percent of what we have gotten has been off-the-charts and very moving.”
Bragg said he’s been working on designing a new guitar model to be released perhaps as early as Spring, 2020.