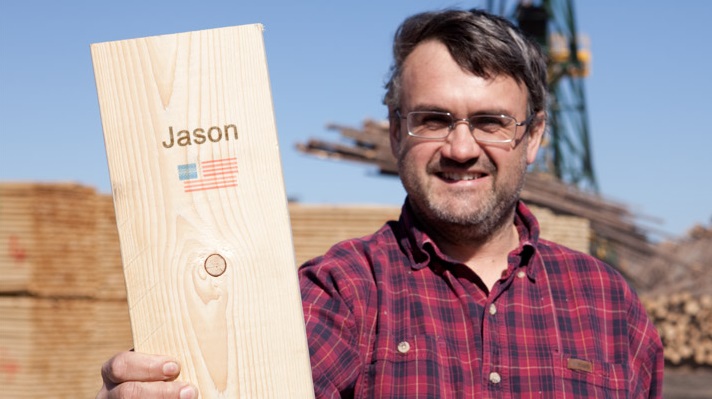 Jason Brochu, co-president, Pleasant River Lumber heads the U S. Lumber Coalition
WASHINGTON, D.C. – The U.S. Lumber Coalition applauded today’s decision by a World Trade Organization (WTO) dispute settlement panel that affirmed the United States’ anti-dumping measures.
The ruling concerns the Differential Pricing Methodology used by the U.S. Commerce Department to determine whether softwood lumber products from Canada are being sold in the U.S. at prices lower than those charged in Canada.
In its decision the WTO panel rejected a prior WTO appellate body’s finding on the issue, which imposed obligations on the United States in calculating pricing figures that demonstrate whether unfair pricing practices have taken place. The U.S. Lumber Coalition, an ad hoc trade group formed around the issue of lumber imports, characterized the action by the WTO panel as "an essential affirmation of U.S. sovereignty and its rights to fully and properly enforce trade laws as enacted by Congress."
“The U.S. industry strongly supports the Administration’s full enforcement of the U.S. trade laws against subsidized and dumped Canadian imports,” said Jason Brochu, U.S. Lumber Coalition Co-Chair and Co-President of Pleasant River Lumber Company in Maine. “The fair chance to compete on a level playing field is of utmost importance to domestic lumber manufacturers, their workers, as well as tree farmers and landowners, and the economies of the rural communities they support across the United States.”
Canada had challenged the methodology used by the U.S. Department of Commerce that determined Canadian exporters sold softwood lumber to the United States at less than fair value. The WTO panel decision clears the Department of Commerce to use the "zeroing" methodology winch leans more in favor of the U.S. producers, who have long claimed imports are sold in the United States at less than fair value.
The U.S. Lumber Coalition is an alliance of large and small softwood lumber producers from around the country, joined by their employees, and woodland owners. Its goal is to serve as the voice of the American lumber community and softwood lumber trade practices. For more information, please visit the Coalition’s website at www.uslumbercoalition.org.