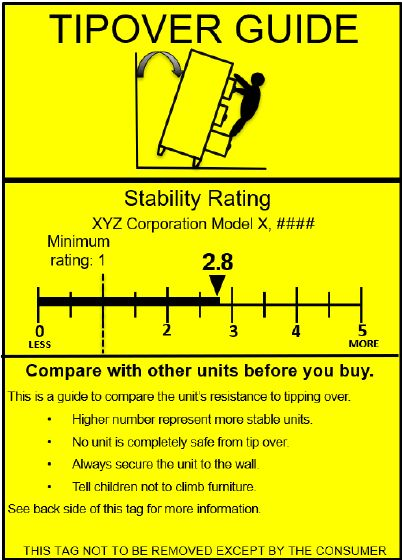 Bill Perdue, vice president of regulatory affairs for the American Home Furnishings Alliance (AHFA), spoke on behalf of furniture manufacturers and importers. Perdue, who spoke for 10 minutes during the 2-hour hearing, said that there were two voluntary tests that most manufacturers adhere to, as heard in this audio segment from Youtube.

CPSC released the 1,100-page Notice of Proposed Rulemaking (NPR) in July and published it in the Federal Register on February 3, opening a 75-day public comment period. Written comments on the rule can still be submitted through April 19.

As part of its public testimony, AHFA noted that the Alliance and its member companies support a mandatory furniture stability standard to help prevent furniture tip-overs. A voluntary standard to address this hazard was developed by ASTM International in 2000 and has since been updated seven times in response to new product trends and changing consumer behavior. AHFA’s member companies have been at the forefront of implementing safety improvements dictated by the standard, Perdue told the commissioners.

In the 22 years since the voluntary standard was created, only one fatal incident is known to have involved furniture that the manufacturer said complied with the voluntary standard. However, injuries and deaths due to non-compliant units have persisted. Therefore, AHFA has advocated a robust mandatory federal rule that holds all manufacturers and importers to an equal standard of stability and safety.

CPSC announced its intention to draft a mandatory stability rule for clothing storage furniture in November 2017. It conducted extensive testing and analysis over the next three-and-a-half years to produce the rule now under consideration.

While continuing to support a mandatory standard, AHFA raised key concerns with the CPSC’s proposed rule in its oral testimony Wednesday.

First, the rule outlines two different stability tests that produce inconsistent results. The rule allows manufacturers to choose the test that best matches the design of the unit being tested. Based on its sample testing, AHFA found that the two stability tests can produce different results for the same unit. In fact, a dresser or chest found to be compliant using one test method could be found non-compliant using the other test method.

In addition, both test methods depend on the testing individual’s observation of a unit’s precise “tip-over moment.” This subjective input creates further variability in the data that is gathered to determine compliance.

“The demonstrated variability in results using the two different test methods raises serious concerns regarding enforcement of the standard if it becomes effective,” Perdue said. AHFA maintains that variability and ambiguity in the testing methods will result in years of debate and, ultimately, an unenforceable rule.

The second key concern AHFA detailed in its public comments was the accuracy of the cost-benefit analysis in the rule.

CPSC staff said it looked at five clothing storage units (CSUs) when developing its compliance cost analysis and took into account the following:

Taking all these costs into consideration, staff estimated compliance at $13 to $25 per unit. However, none of the above costs are itemized in the staff’s description of cost, other than interlocks, estimated at $6 to $12 per unit and counterweight, estimated at 24 cents a pound. The NPR states one supplier estimated the cost of redesigning a CSU at $18,000, including the prototype, testing, engineering and design, but no explanation of how that figured into the estimated $13 to $25 per unit is offered. Additional shipping costs are summarized in a single statement: “In the case of RTA furniture, the cost of packaging and shipping could increase.”

It’s also unclear whether the five sample CSUs evaluated by CPSC staff are representative of the range of clothing storage units in the marketplace. What is clear is that the estimate underrepresents the listed costs and omits other costs, including the expense of third-party testing and redesigned packaging for heavier units, Perdue noted. These latter two expenses are significant and add nothing to the safety of the product.

The cumulative impact of added costs will eliminate some CSU suppliers and push many others into higher price points. The NPR acknowledges: “the proposed rule could disproportionately impact lower-income consumers or those seeking low-cost models.”

A third key concern is the hangtag required by the rule, intended by CPSC to provide consumers with “comparative information about the stability of products.” It features a 5-point numerical scale, with the brief explanation: “Higher numbers represent more stable units.”

However, Perdue noted that none of the hundreds of units tested by AHFA and its member companies and only one unit of 186 tested by CPSC staff achieved the minimum rating of “1” without modification. Following modifications, including adding drawer interlocks, redesign and/or the addition of counterweight, AHFA members found they were able to achieve a “1” or slightly higher. Yet none reached a rating of 2, even with significant modifications.

With the vast majority of units scoring between 1 and 1.5, or, optimistically, a 2, the hangtag asks consumers to make a buying decision based on mere fractions of differentiation.

Finally, Perdue noted that the NPR’s original 180-day compliance timeline was too compressed for the industry to implement the sweeping design, testing and labeling requirements necessary for compliance. As amended by the commissioners in February, the rule now carries an impossible 30-day compliance timeline. Should the rule pass with this 30-day implementation period, companies will be left with massive inventories of non-compliant product.

Despite supporting the voluntary furniture stability standard since its inception, advocating for a mandatory standard, investing in research to improve stability testing, supporting the CPSC’s “Anchor It” campaign, and promoting clearer safety information on its member companies’ websites, AHFA has not done enough, Commissioner Dana Baiocco said at the conclusion of AHFA’s remarks.

In September, AHFA produced a video demonstrating the variability between the two test methods in the NPR and shared that video with the commissioners. AHFA followed up with details on test methods its members developed in April that would provide a clearer pathway for rule enforcement. Nevertheless, Baiocco accused the Alliance of “never coming forward” with positive suggestions to help reduce furniture tip-overs.

Commissioner Richard Trumka, who began his first term on the commission in December 2021, also criticized AHFA’s testimony and suggested the Alliance withdraw its claim that the compliance costs were understated in the NPR. Perdue agreed to review the NPR for further insights but declined to change AHFA’s testimony.

Public hearing presenters speaking in favor of the CPSC’s proposed rule included Lisa Siefert, founder of Shane’s Foundation and co-founder of Parents Against Tip-overs; Rachel Weintraub, legislative director and general counsel for Consumer Federation of America; Gabe Knight, a policy analyst for the advocacy division of Consumer Reports; Kimberly Amato, another co-founder of Parents Against Tip-overs; and Nancy Cowles, executive director of Kids in Danger (KID).

Siefert told the commissioners she supports the NPR and its emphasis on testing that simulates “real world use” of clothing storage furniture. This includes a test that accounts for the impact on stability when a unit is placed on carpet and, at the same time, has a child climbing it or playing in it. She suggested “a final rule will ensure safe CSUs.”

Weintraub pointed out the NPR’s very detailed definition of a “clothing storage unit” based primarily on its height and storage capacity. She noted this would prevent manufacturers from skirting the rule’s requirements based on how they describe a piece in their marketing. So, for example, furniture marketed by the manufacturer as a “hall chest” would still be subject to the rule’s requirements if it met the height and storage capacity threshold.

Knight, who joined the Consumer Reports advocacy team in October 2020, told the commissioners that “some manufacturers have a history of resisting changes.” She suggested that the ASTM Furniture Safety Subcommittee “is controlled by manufacturers” and questioned whether ASTM could ever produce an adequate furniture stability standard.

Amato said none of the updates to ASTM F2057 have been meaningful and added “history shows us we cannot put our trust in this process.” She reiterated a frequent claim forwarded by parents that “manufacturers already know how to solve this problem.” She urged CPSC to proceed rapidly in approving its proposed rule.

Cowles was the only speaker to join AHFA in expressing concern over the complexity of the NPR’s proposed test methods. She urged CPSC to consider simplifying the tests and/or providing manufacturers with additional guidance to ensure consistent test results. Cowles also emphasized her opposition to manufacturers being permitted to use levelers when conducting the tip tests, a provision that CPSC staff included in the NPR. Cowles said consumers cannot be counted on to level a dresser or chest according to the manufacturer’s instructions, so levelers should not be used to help units pass the tip tests.

A copy of AHFA’s oral testimony is posted on the Furniture Stability page at www.ahfa.us. Once submitted to the Commission, the Alliance’s more detailed written comments also will be accessible in the same location.

CPSC: Despite progress, tip-overs still cause injury and death