Last year the agency estimated there were 6.3 billion dead standing trees in 11 Western states. This means that far more trees are dying due to neglect such as catastrophic wildfire, insects, and disease, than are being harvested and utilized as wood products.

Our federal forests are not being actively managed, whether through logging, thinning and prescribed fire, said Healthy Forests Healthy Communities.  As a result, our forests are dying at a rapid rate. And today we have millions of acres with dense stands of trees that compete for light and water, making them more vulnerable to changing climate conditions, drought and insect infestations.

And as forest mortality has increased, our forests have become net carbon emitters. In California, for example, research suggests that that greenhouse gases are billowing out of the state’s forests faster than they are being sucked back in.

Scientists have found that active forest management can ease overcrowding, promote tree growth, and help make forests more resilient to disturbances such as wildfire, insects, and disease. The lack of forest management and resulting spike in mortality has limited our ability to capture carbon in wood products.

Forest management is a choice, said the Healthy Forests Healthy Communities.  We can continue to allow our forests to die and succumb to catastrophic wildfire, insects, and disease. Or, where can manage our forests to promote forest health, resiliency and carbon sequestration, while producing renewable and environmentally-friendly products that meet our daily needs and support thousands of American jobs. See http://healthyforests.org/.

John Greene, in a blog at Forest2Market, wrote that with wildfire season just a few weeks away in the Pacific Northwest, the amount of standing dead timber in western national forests is a real concern for both residents and the federal and state agencies that are tasked with fire suppression efforts and mitigating fire damage.

A standing dead tree has dried and is an excellent fuel source for wildfires.

In Montana alone, Greene wrote, there are 1.2 billion standing dead trees, in Colorado there are 834 million, and in Idaho there are 814 million.

Greene asks, What are the federal and state governments—who are responsible for these millions of acres of forestland—doing to remedy the situation?

Healthy Forests noted that, “With today’s technology, it’s possible to harvest timber in a sustainable manner that protects the many benefits we’ve come to expect from our forests. Sustainable management of our forests includes replanting after harvests, selective harvesting, protection of water sources and wildlife habitat, and wildfire prevention.”

Healthy Forests added that a lack of thinning or harvesting in dense, overcrowded timber stands can threaten both forest and wildlife habitat by making stands vulnerable to unusually hot and destructive fires. “For example, from 1968 to 1985, fires burned an average of 3,700 acres per year across Oregon. After 1985, through 2011, the average fire size increased to 46,000 acres per year.  Colorado, California and Arizona forests have experienced record impacts from forest fires.” 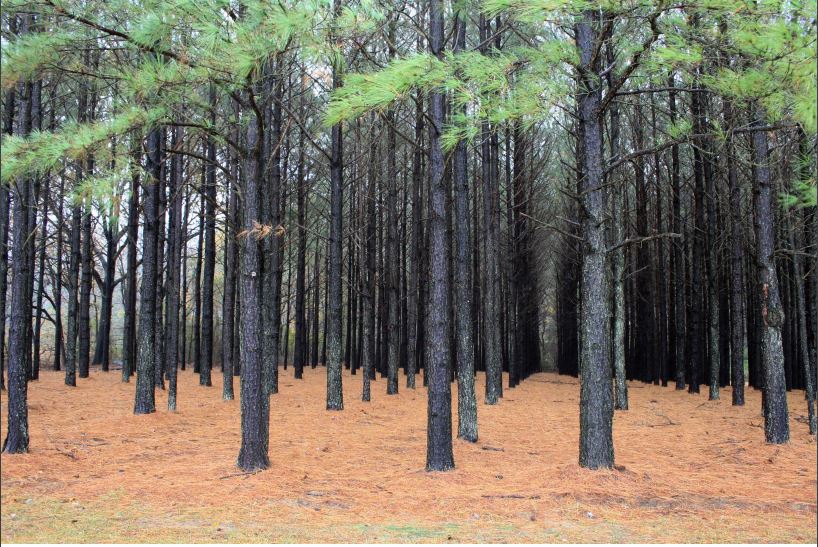 Gene Wengert, the Wood Dr., commented to Woodworking Network on the forest situation.

“There are several key points here,” Wengert said. “First, note that harvests are small compared to mortality, which is five times larger. Second is that with this mortality, the volume of timber on National Forests is decreasing, which will make it likely that various groups that are against any forest harvesting will have a stronger case against harvesting, as mortality and harvesting will make the net forest volume decrease annually even more based these statistics.

Wengert said that we have to appreciate that the data are skewed to softwoods, as we have a lot more softwoods in National Forests than hardwoods. However, one might expect that hardwood forests will come under the same ‘reduce harvests to save our forest’ umbrella.

“The real problem is that the present National Forests have not been and still are not well managed (logging, thinning, prescribed burns, etc.) due to a lack of funding to do needed TSI (Timber Stand Improvement),” he said.

“In the last century, with the tight control of forest fires, with decreased harvesting in the past 40 years, and other forest poor practices, trees have grown closer and closer together, which means harmful insects and disease can spread much easier without natural forest breaks; the acreage of standing-dead, insect-killed trees has increased tremendously.”

Likewise, Wengert said, wildfires now burn faster and much hotter (doing more damage to the ecology) with the ample fuel supplies on the ground and standing-dead stems from the crowded trees. Further, by putting out fires in the past, natural fire breaks (such as the growth of hardwoods leaf trees like aspen in the Rockies) did not happen, so forest fire areas are much larger now.

“Add the effects of the Western drought, and we have a disaster looming for 2018,” he said. “And think of the job losses in the Western forest industry and the huge cost to fight these wildfires. And after a large, hot fire, there is huge ecological damage to birds and animals, soil, natural tree reproduction, watersheds, and more.

“What does this mean for us?  Two things are likely for our secondary forest products industry. A shortage of softwood logs means that pressure will be brought onto the Southern pine private forests, most of which are well managed. Southern pine lumber already has record high prices.

“Further, we will need even more Canadian softwood lumber to fill the lumber shortage gap, which again means even higher prices. It is hard to imagine that higher housing prices due to higher lumber costs will be helpful for furniture, cabinet, flooring and millwork industries. Plus, with the higher salaries that the Southern pine industry pays its loggers and truckers, the hardwood sawmills will see more shortages in logs.”