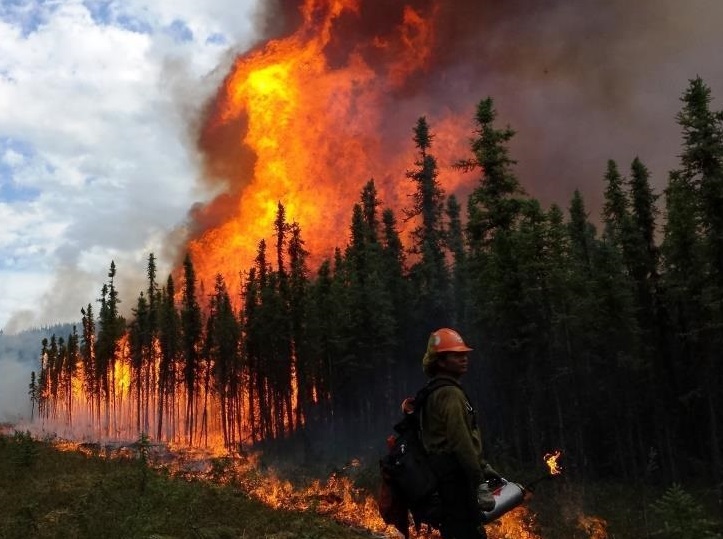 We have all heard about the terrible forest fires in the West in the past few years, and especially the Camp Fire in November 2018. Let’s look at forest fires from a forestry point of view. But before beginning, we do want to voice our cares and concerns for those who lost family and friends and to those that lost homes, belongings and a lifetime of irreplaceable items in the Camp Fire and all wildfires.

A forest fire needs a source of ignition. It needs fuel and needs oxygen. The ignition source is often cloud-to-ground lightning strikes, but human activities do cause many fires. The fuel source is wood, leaves, needles and understory grow including brush and grass.

The speed of burning and the speed of expansion of a forest fire into new fuels depends to a large extent on the presence of oxygen. In turn, this means the wind speed is a huge factor in the life of a fire, as the wind brings in oxygen, as well as carries burning embers into new fuel sources.

Further, as might be expected, the openness of the fuel (open to blowing wind, such as the needles on a standing tree versus the needles that have fallen to the ground) is important in the intensity of the fire.

A quick lesson in burning can help understand why fires move at times with lightning speeds. When a small piece of wood is first heated (likely from adjacent fire), the moisture is first driven off.

As much as 15 percent of the energy generated by the fire is used for evaporation; stated another way, wet fuels initially burn more slowly and cooler. In fact, that is one reason why water is dropped on a fire. On the other hand, this is also why long, warm and dry spells will dry the fuel and result in worse fires. The role of moisture in the air is another factor -- dry air means drier fuel.

Once the water is gone, the wood heats and decomposes into various flammable gases. These gases ignite and might burn (using oxygen) at 700F and hotter. This is a key to understanding forest fires, so we will come back to this gasification process. Once the wood has gasified, carbon is all that remains.

This hot carbon combines with oxygen to form carbon monoxide if oxygen is sparse or carbon dioxide when oxygen is plentiful. This carbon burning occurs at 1100F or much hotter when oxygen is abundant. (Do you recall that a blacksmith would use a bellows on his fire to increase the oxygen and heat from the burning carbon?) All in all, in the fire there is no surplus oxygen and very hot temperatures.

Back to the burning gasses…if there is a lack of oxygen, the gases will not ignite but will move away from the heated wood. Eventually, with oxygen and a source of ignition, there will be what we might call an explosion; a ball of fire moving at tremendous speeds, usually in front of the fire because that is where there is oxygen. Add some natural wind speed, and this becomes disastrous.

Incidentally, smoke is often a mixture of unburned gases and carbon dust, as well as hot “air” with little or no oxygen. Plus, all the water that is evaporated makes clouds of moisture that mixes with the soot clouds.

Forest management before a fire

We hear a lot of comments that the forest fires today are so common or so bad because of poor forest management during the past 100 years. This statement has some truth in it, but we do need to understand that a forest fire is a natural event in nature.

For example, in California, away from the coast, there is both written and forest evidence that the typical region burned every 27 years, thereby “cleaning up” the forest by removing the fuel. (Note I said “region” as this pattern affected both forests with trees and treeless land with brush.) When fires do not occur from time to time, the fuel level increases year after year. The eventual, inevitable fire is then ferocious.

It is true that logging (clear cutting) will remove about 50 percent of the potential fuel supply for a subsequent fire. Further, the branches and other logging debris that is on the ground will dry and make excellent fuel initially, but this fuel soon becomes matted and less open. Of course, non-clear cutting removes less wood so this partial harvesting is less significant in fire control.

It is also true that logging provides roads that provide access to forest fire fighters.

Perhaps the biggest issue related to forest management began in 1910 when it became a national policy to stop forest fires, especially in the West as quickly as possible. Forest fires were considered bad. This idea was supported by Smoky The Bear who stated that “Only You Can Prevent Forest Fires.”

As a result of this approach, the amount of wood per acre increased, increasing the fuel supply over what would have existed if fires had been allowed to burn in some cases. Further, the forest lost many of its natural clearings without trees that would have resulted in natural wildfire breaks. Add to this approach the decrease in harvesting as a management tool, partly due to the lack of funding to mark and sell federal timber and partly due to public perception that tree harvesting, especially clear cutting is always bad.

This idea of putting out fires and no harvesting was highlighted in U.S. Park Service lands, such as Yellowstone National Park. A document was issued to the Park Service warning about the big fire 10 years before it happened, with the suggestion of creating cleared treeless areas; it was not done. The end result of this lack of harvesting to control fires in advance and limiting fires resulted in many large, very hot wildfires that cannot be easily controlled.

I recall some years ago when I worked in the U.S. Forest Service that the fire risk around Rocky Mountain National Park had increased. So, the Government decided to use a prescribed, controlled burn when wildfire conditions were not favorable to reduce fuel content. This controlled burning would do what nature had been prevented from doing.

After this particular fire, it was also expected that the conifer forest would be changed into an aspen forest for the next 75 years. In addition to the natural firebreak provided by aspen, the trees would provide food for large game, grouse and even voles. Plus, the golden leaf color would provide excellent scenic beauty in the fall season.

The only problem was that the wind shifted soon after the fire was started and the smoke flowed into Estes Park. The number of complaints assured that further prescribed burns would never happen.

Further, with the presence of so many trees, often of the same age group, insects are able to move into the forest and spread very easily. A comparison of the forests when Col. Custer was in the West compared to today shows the huge density change in our forests. With the mortality caused by insects, the forests become standing dead, dry timber that makes excellent fuel.

Of course, there is a lot of scientific and political discussion about climate change. We do know that in the last decade, the length of the wildfire season has increased by three months; it runs roughly from March through November now in the South and West.

Regional differences in the U.S.

Wildfires in the South, Midwest and East are different than fires in the West mainly due to the higher humidity and more rain east of the Mississippi River. This means that the forests east of the Rockies are full of hardwood trees with leaves; hardwoods do not burn as vigorously as softwoods, creating natural wildfire breaks.

Plus, the South, Midwest and East do not have the strong winds, like the Santa Ana winds in California. Plus, the flatness and easy accessibility to many of the forests in case of wildfire helps. Also, the harvesting cycle in the South for much of the forestland is 30 years or less for pines. Large expanses of old, tall, even-aged stands are not common.

There are many regulations regarding the location of dwellings and other structures within the forest or other wildfire-prone regions such as brushy areas in California. (In California, brush on non-forest lands can be 15 feet tall. This brush burns well and provides a link between forests in a wildfire.)

It makes sense perhaps that areas around the dwellings should be cleared of flammable material. But of course, “being in the woods” is why the house site was chosen in the first place. House roofs should be made with non-non-flammable materials, for example.

Such regulations are often more political and without much effect with moderate and larger wildfires. In truth, when living in the forests, we seem to forget the risk of wildfires. In fact, many locations do not have two or more emergency exit routes. The remoteness of living in the woods makes firefighting tough.

Every time a forest burns, in addition to the loss of life and loss of property, we are losing timber that could have been harvested and used for home building and other myriads of uses. The cost of Timber Stand Improvement (TSI) is not cheap, so in the short term outlook, most TSI work, especially on federal forests, directed at controlling fires is not done. In the larger picture, TSI needs to be done and the payback benefit is huge.