China has retaliated in the trade war - slapping $60 billion in tariffs on more than 5,000 U.S. goods.
China's Ministry of Finance announced Monday morning that China would increase tariffs on 5,140 U.S. products beginning June 1. The move is in retaliation to U.S. increases on Chinese goods that went into effect last week.
“China’s tariff move is in response to the U.S. unilateralism and trade protectionism,” the Chinese said in statement issued on Monday. “China hopes that the U.S. will return to the right track of bilateral trade talks, work together with China and meet each other halfway, to reach a win-win and mutually beneficial agreement on the basis of mutual respect."
Wood, tariffed from 5 percent to 25 percent, is on the list. The Hardwood Federation reports:

We cannot confirm these tariff values at this time, as translated lists are not yet available. The above rates were announced in December.

The Hardwood Federation also reported - although unconfirmed - that China may implement an exclusion process, which would provide Chinese importers of U.S. goods the opportunity for relief on certain products.
The June 1 start date is so both sides have more time to negotiate. Trump said he is fine with the China retaliation as long as it doesn't surpass a certain level. The stock market took a hit after the announcement.
“I love the position we’re in,” Trump said from the Oval Office. “I think it’s working out really well.” 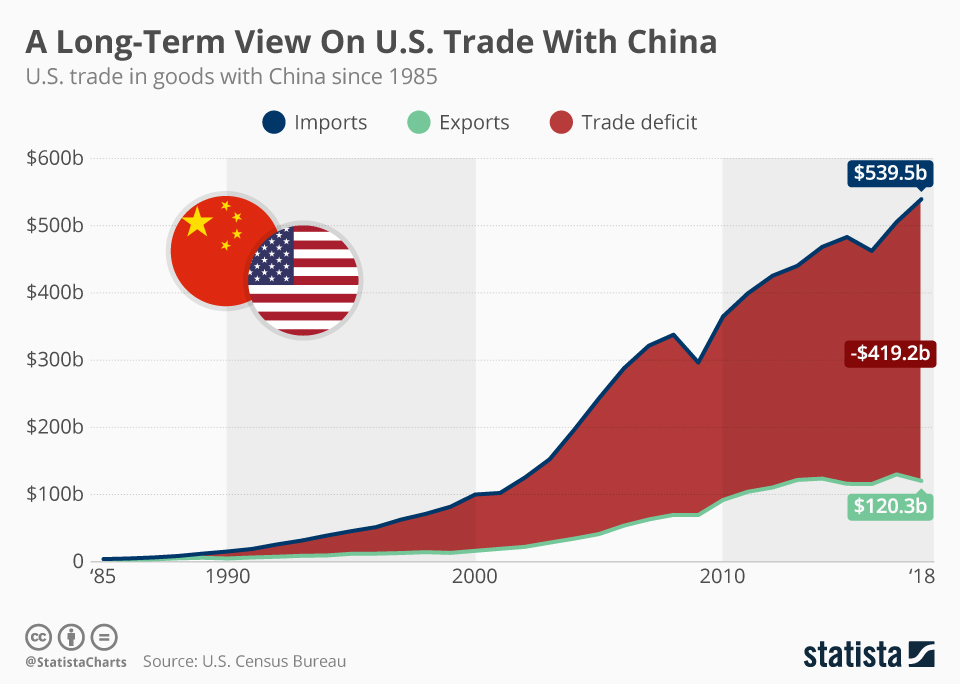 Photo by Statista
In early December, Trump and Chinese President Xi Jinping agreed to 90-day halt of a tariff increase from 10 percent to 25 percent on $200 billion worth of Chinese exports. In the handshake deal, Trump promised the U.S. would hold off on the 25 percent tariffs scheduled for January 1 and China "agreed to an unspecified increase in their purchases of American industrial, energy and agricultural products."
If an agreement couldn't be reached by March 1, the 25 percent tariffs were to be back on. These are the tariffs that ended up going into effect last week.
We surveyed more than 200 of our readers to find out how they are being affected by the tariffs. A total of 85 percent of survey respondents expect to raise prices in response.
Data from China’s Customs Department show the value of wood products trade between China and the U.S. fell 16 percent in March 2018. China’s imports also dropped by 5 percent, though overall first quarter showed a 9 percent increase in Chinese exports of wood products: China's imports rose 6 percent to $2.28 billion during the period, while its exports to the U.S. rose 10 percent to $3.98 billion.
Raising tariffs will hurt both US & China economies + more importantly will hurt US farmers/consumers/businesses Enough is enough China needs to negotiate seriously & quit moving the goalpost Enforceable trade deal needed for certainty
Cailin Birch, global economist at The Economist Intelligence Unit, said she still expects the U.S. and China to reach a limited trade agreement in the next month or so because of the serious economic ramifications both countries will be dealing with otherwise.
“However, a cooling-off period may be necessary to allow each party to save face, before meaningful progress can be made,” she said. “And without a doubt, the risk that a deal will fail to materialize has risen considerably, now that trust has been eroded on both sides.”
The Chinese announced the tariffs shortly after Trump warned them not to take any action and urged President Xi to sign a new trade deal.
"I say openly to President Xi & all of my many friends in China that China will be hurt very badly if you don’t make a deal because companies will be forced to leave China for other countries," Trump tweeted early Monday.
"Too expensive to buy in China,” he added. “You had a great deal, almost completed, & you backed out!"
Trade talks between the two countries stalled Friday without a new deal after Trump raised tariffs on $200 billion in Chinese goods to 25% from 10%, including office furniture, handbags and frozen catfish fillets, after trade talks between the two countries stalled.
The U.S. Trade Representative’s Office also has started the process of levying tariffs on another $325 billion in Chinese goods, a move that would mean that virtually every Chinese import that enters the U.S. will be subject to a levy.
May 13, 2019
Just hours after President Trump warned China not to retaliate against the U.S.’s latest tariff hike on Twitter, the Chinese Ministry of Finance did just that by raising the tariffs on thousands of American products worth roughly $60 billion in annual imports. Going into effect on June 1, the Chinese tariff hike is a direct response to the Trump administration’s decision to raise the tariff rate on $200 billion worth of imports from China from 10 to 25 percent on Friday, just hours after trade talks between the two countries had broken down.
“China’s tariff move is in response to the U.S. unilateralism and trade protectionism,” the Chinese said in statement issued on Monday. “China hopes that the U.S. will return to the right track of bilateral trade talks, work together with China and meet each other halfway, to reach a win-win and mutually beneficial agreement on the basis of mutual respect."
The U.S. is expected to respond to the Chinese announcement by levying an additional 25 percent on all remaining imports from China later on Monday, marking another escalation in the trade war that has been dragging on for more than a year now. Trump has repeatedly voiced his discontent with the trade imbalance between the world’s two largest economies, stating that the U.S. is being ripped off and losing hundreds of billions of dollars on Chinese trade every year. And while the U.S. trade deficit with China did in fact reach a record high of $419 billion in 2018, that money is neither lost nor is the large trade deficit necessarily a bad thing for the United States. In fact, the latest increase in the deficit is a sign of strength, as a strong U.S. economy and a strong dollar boost demand for Chinese goods in the U.S.
The full list of wood products affected: