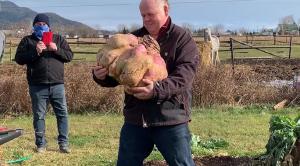 CARLETON-SUR-MER, Quebec – Damien Allard, a cabinetmaker by trade, is now the Guinness World Records’ holder for growing the heaviest turnips.

According to the Guinness website, Allard became inspired to shoot for the turnip record after he grew a turnip weighing 7 kg (15 lb, 6.9 oz) in 2016.

The world champion of turnips told Radio-Canada, “It's been two years that I have been working quite intensely on my turnips. I suspected very strongly that this year was the right one, but I never thought I would have been more than 10 kilos above the old record."