Bringing the functions of its panel processing together and employing more data and automation helped Haworth produce work surfaces more efficiently and in any quantity.

Two nearly identical lines designed to produce worktops and tabletops are in operation at the company’s large headquarters location in Holland, Michigan, which includes management, design, distribution and other manufacturing operations. The company has 11 manufacturing locations, primarily in Michigan.

The first line, up and running since late 2017, makes work surfaces, tables, and tops for casegood products. The second line, coming into production now, will make all the same products as the first line plus desk ends and divider screens.

Earlier, Dan Gibbons had organized the effort to get these lines approved, to replace equipment that was 20 years old. The engineering team helped define what the company needed to do, decided which equipment vendor would be employed and how implementation would be carried out.

Jill Meredith, technical service manager, took over for Gibbons and worked with Haworth’s corporate IT group in setting up the right structure and integration with the company’s network.

Why two lines? “It’s for capacity,” Kevin Welscott, advanced manufacturing engineer, said. “One line wasn’t quite enough to support what we wanted. We really needed two. The other push was for redundancy, so you could bring down one line to do preventive maintenance or fix something and you weren’t completely down in those product groups.”

Also, Haworth is usually busier in the fourth quarter than the first quarter. Dowelling capability helps with casegood volume spikes.

“This is a quick changeover line. The manufacturing execution system can manage multiple orders, sizes, and change of colors. One-piece orders run almost as fast as a 100-piece order through that line.” 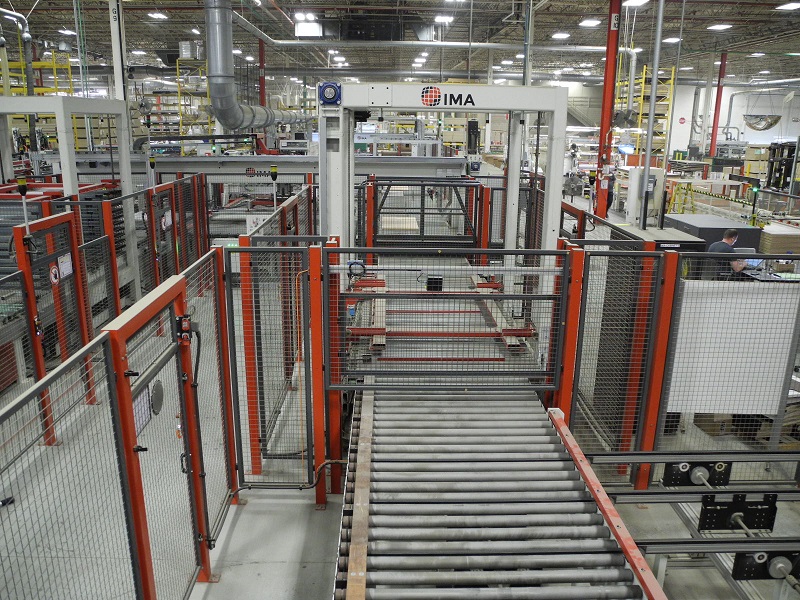 Two nearly identical lines designed to produce worktops and tabletops are in operation at the company’s large headquarters location.

From batch to continuous

Previously, individual machines made batches of parts. Now it’s a continuous line, with all the material handling between the lines tied together. About 12 people per shift can run the line and the assembly.

“So you were moving groups of product and there was no automation handling that equipment. These large work surfaces were getting touched four or five times by people having to pick them up or flip them or move them.

“This is as close to a one-piece flow as you’re going to get. So now nobody picks the part up until the very end to put it in the box.”

The new equipment has to deal with five times as many edge colors and more top colors, said Ed Velthouse, manufacturing engineer. “Our average order quantity has gone down and our changeovers have gone up.

“We only make what’s been sold,” Velthouse said. “If they’ve sold one, we make one. Probably half the pieces in the line on any given day are one-piece orders.”

The labor market continues to be tight, and it is difficult to get people. Working from a video screen is more attractive than handling panels.

”These jobs are more attractive than the jobs they replaced,” Meredith said. 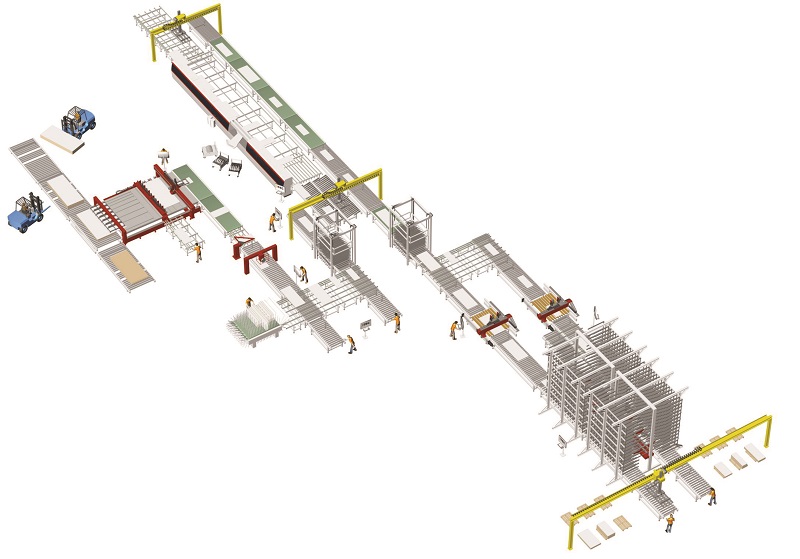 IMA was chosen because they had a good handle on providing the whole system, rather than individual pieces of equipment with conveyors between machines.

According to the engineering staff, IMA was chosen because they had a good handle on providing the whole system, rather than individual pieces of equipment with conveyors between machines. Also, IMA was committed to having people on site for several years as Haworth got going.

IMA was also able to provide the manufacturing execution system that could tie everything together and work with Haworth’s MRP system.

The customer orders come through Haworth’s MRP system, Meredith said. A list of parts is printed. All information including dimension and color is packaged into one bar code.

The complete system is controlled by IMA’s IPC.net optimization software and connected to Haworth’s ERP software via MES software provided by IMA’s software partner company 3Tec. IMA has a similar line to this one in a Haworth operation in Germany.

The nested-based router works without the need for vacuum hold down or spoil boards and can support the capacity/shift of about 1,000 parts/shift (100 completed worktops per hour) that was guaranteed to Haworth.

The router is flexible and can cut a rectangle from 6 x 12 inches up to 60 x 120 inches in mm increments. After pieces are cut they are labeled. There are a lot of one-piece orders, and that’s what drove decision for Haworth to choose this router.

After the Performance Cut router the line has a porcupine buffer that allows the customer to bring parts out of the line that are then going to secondary processing on the BIMA CNC machining centers with laser capabilities.

This “jealousy buffer” can hold 20 pieces to manage the ebbs and flows, and to allow the different cycle times of the machines to balance out between the Performance Cut and the edgebander. It’s called decoupling because it decouples two cycle times that don’t exactly match.

Parts that do not exit after the Performance cut router are sent to the automated edgebanding loop that processes the tops in four passes. Each side is milled to size and the edgebanding is applied and trimmed. The edgebanding is attached with either laser activated glue or PUR adhesive.

The Combima edgebander operator can see a live video screen to monitor edge quality so that he doesn’t have to stop the edgebanding process.

From the edgebanding loop the panels go into the Priess & Horstmann automatic throughfeed CNC drilling and routing machines.

These routers can drill pilot holes and machine cutouts on the edges of the panel and internal cutouts for wiring.  The router can drill from either top or bottom allowing the part to remain show surface facing up.  That was a requirement, to be able to run face-up all the way through the line. After the processing has been completed all panels go into two fully automated sorting buffers which allow Haworth to store completed products and re-shuffle the sequence of the processed tops for the packaging operation that follows the automated system, Tuenker said.

Velthouse said the line makes parts in the most efficient way. It doesn’t make them order by order. A five-piece order may be on five different sheets, for example. The sorting box puts that order back together so all of the parts come out at the same time for each customer.

Then pieces are stacked and packaged, and sent directly to the customer, where the different components are assembled. 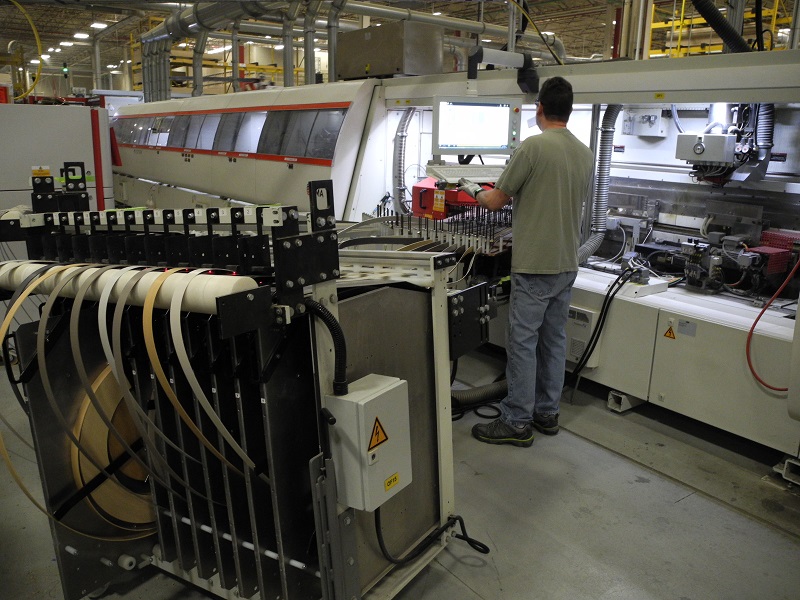 After the Performance cut router parts are sent to the automated edgebanding loop that processes the tops in four passes. Each side is milled to size and the edgebanding is applied and trimmed.

Controlling variation in the process was one challenge for the Haworth engineers.

“If you have 20 edgeband colors, you try to run six at a time so you don’t overwhelm the system, or the operator,” said McCall.

“The line is very flexible, but people have to understand the inputs and outputs and how the system responds to the inputs humans give to it.”

Also, Haworth tried to use their old process with the new system.

“We wanted IMA and 3Tec to copy our old processes,” Meredith said. “One of our stumbling blocks was learning that wasn’t really what we wanted. We should have listened to what they said to start with.”

Today, every piece is data driven.

“That’s different than what we were used to.” Said Brent Kunzi, manufacturing engineer. “In our old equipment, the operator would decide which color edgeband, and what thickness and so on. Now we write that program ahead of time for every pass.

“There’s a lot of data with that, and we worked with IMA on the programming. They did an outstanding job of simplifying it, and we don’t make a lot of mistakes on the data side.”

Haworth doesn’t have a typical customer. They have some very large customers and some very small customers that want one-of-a-kind furniture. That’s why they needed a flexible manufacturing system.

“The goal is always to provide high-quality products just in time,” Velthouse said.

“The design side is always pushing the boundary of what we can make,” Meredith said. “I always feel that this team is ready to take that challenge. Odd shapes, crazy colors, different items. We don’t really say no.”

“We’re not scared of high volume or one piece with this flexibility,” said Kunzi. “That’s the beauty of it.” 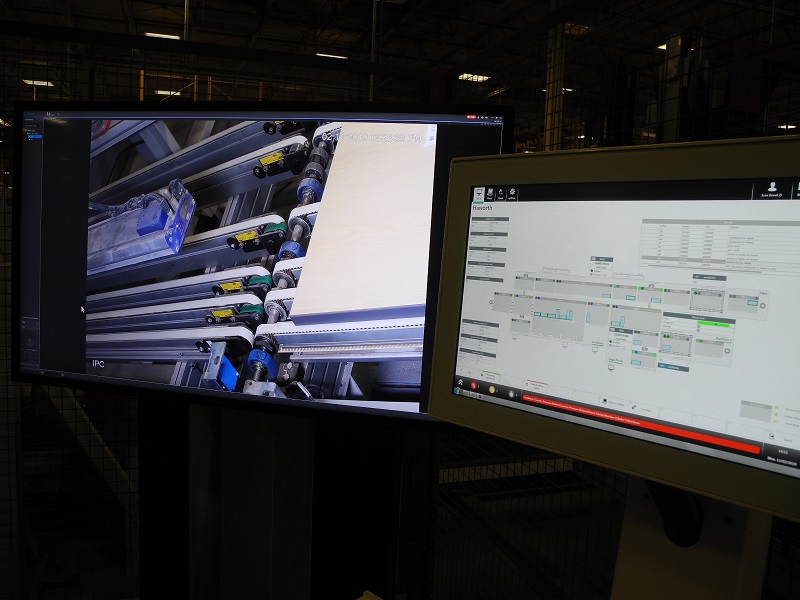 Combima edgebander operator can see a live video screen to monitor edge quality so that he doesn’t have to stop the edgebanding process. 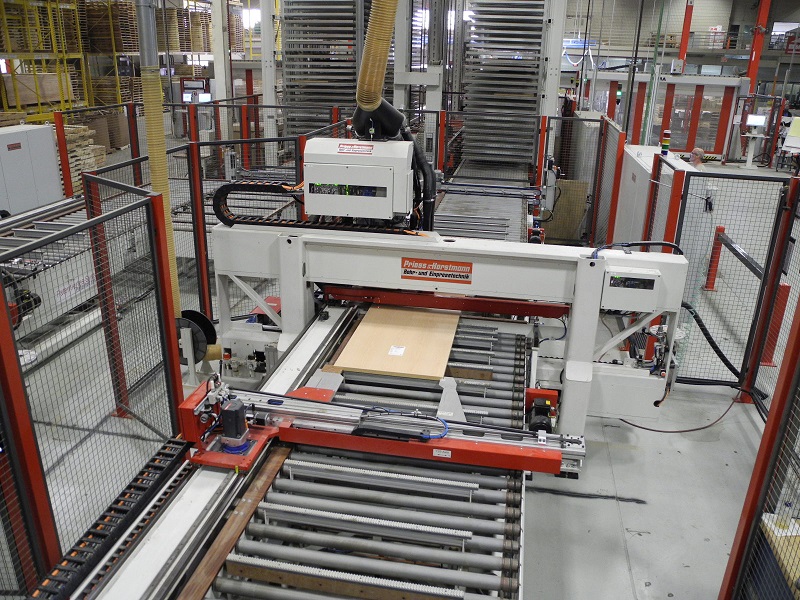 From the edgebanding loop the panels go into the Priess & Horstmann automatic throughfeed CNC drilling and routing machines.