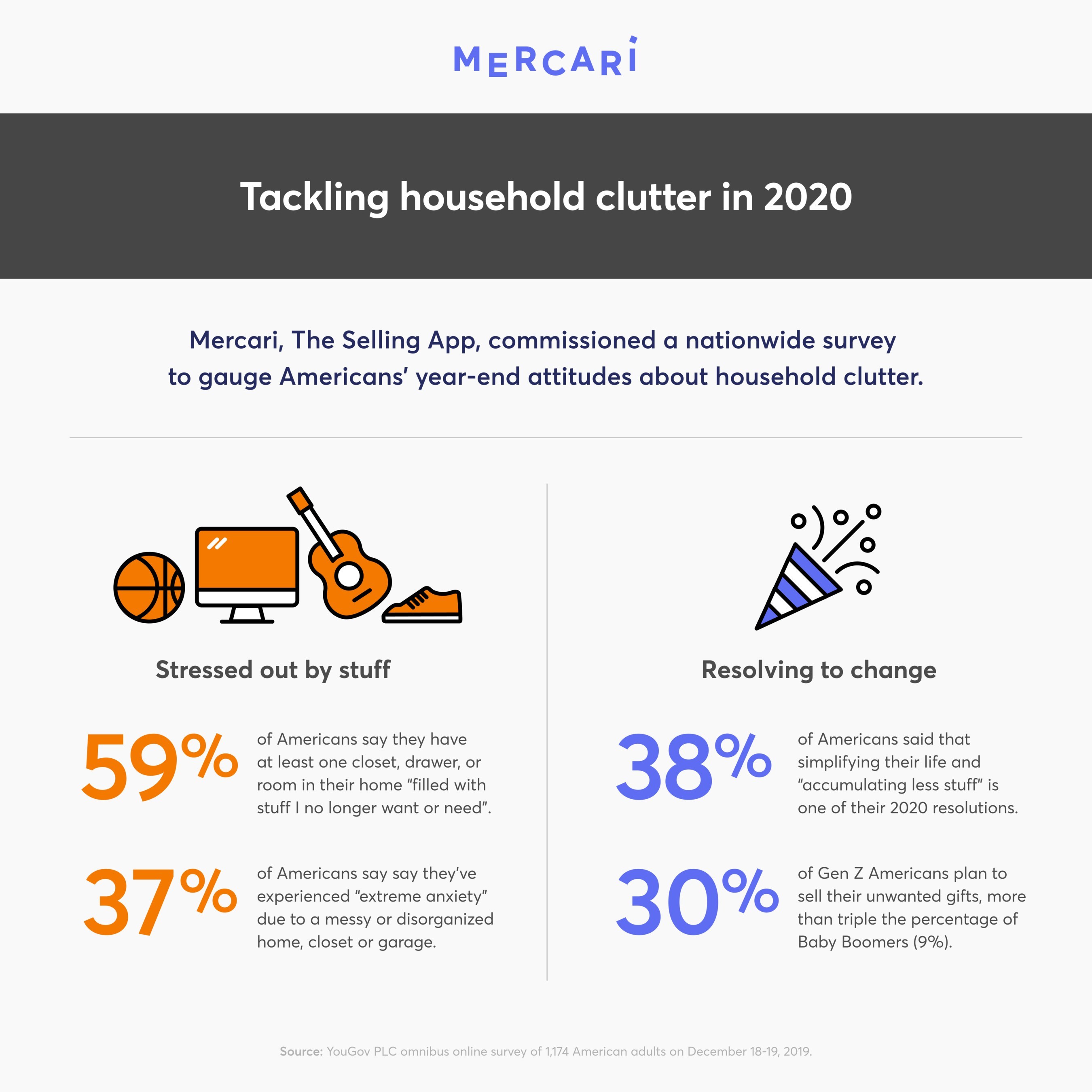 Mercari, The Selling App, released the findings of a nationwide survey to gauge Americans' attitudes about household clutter and their resolutions for 2020. The takeaway: most Americans are stressed out by clutter -- but how they choose to address it varies by generation.
Mercari's research showed that household clutter is becoming an issue for more Americans.
Americans say they're awash in things they're no longer using:
• Over six in ten Americans (63%) say they "have too much stuff" -- about the same percentage who say they have at least one closet, drawer, or room in their home "filled with stuff I no longer want or need" (59%).
• More than one-third of Americans (37%) say they've experienced "extreme anxiety" due to a messy or disorganized home, closet or garage. More than one in five (21%) said they've actually lost sleep for this reason.

Many Americans say they've resolved to tackle clutter in 2020 -- but how we go about it varies based on our age and gender:
• More than one-third (38%) of Americans said that simplifying their life and "accumulating less stuff" is one of their New Year's resolutions for 2020.
• Three in 10 (30%) Gen Z Americans plan to sell their unwanted gifts, more than triple the percentage of Baby Boomers (9%) who say they plan to do so.
• Gen Xers are a little more likely to "regift" their holiday gift rejects -- 32% plan to give unwanted holiday presents as gifts, vs. 28% of Americans overall.
• Women are slightly more likely than men to regift: 30% said they'd regift unwanted presents, vs. 25% of men.
• Men are more likely than women to just hold onto unwanted gifts:  26%, vs. 19% of women.
"We see the surging popularity of resale in the U.S. being driven by younger consumers' attitudes about clutter and sustainability," said John Lagerling, Mercari U.S. CEO. "Their mindset as consumers contrasts with their parents' views, and their relationship with their possessions is changing."
Mercari commissioned YouGov PLC to conduct omnibus survey of 1,174 American adults. Fieldwork was undertaken December 18-19, 2019.
For more information, visit www.mercari.com.