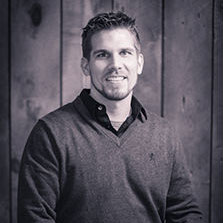 Design engineer Adam Schneider is president and CEO of ConceptWorks, a company dedicated to designing, engineering and crafting prototypes, industrial products, components, displays and custom furnishings for commercial and residential clients. Schneider took on the role of vice president at the company after receiving his bachelors in mechanical engineering in 2004. In 2013, he received an MBA from Lakeland College.

In honor of Young Woodworking Professionals week, we spoke with Adam about the challenges he faced as a young professional, and what he looks for when hiring young woodworkers:

What is your background in Woodworking?

I took woods classes in high school out of interest to have the skill set, but my real interests were in engineering--in mathematics and design. I went to the Milwaukee School of Engineering and received my Bachelors in Mechanical Engineering in 2004, which led me to where I am today.

I also worked in a machine shop in high school, and I was doing the dirty work – sweeping and cleaning up. It was the work nobody really wanted to do, and in doing it well I was able to show I had the work ethic and the drive. The owners of the company reached out and offered me the position of Vice President as I was graduating college – purely because I made a favorable impression when I was 16 years old. This is why I tell younger students, you never know who’s watching you—you may be interviewing for a job without even knowing it.

When did you become president of Concept Works? What challenges did you face?

I started as vice president at Sheboygan County Woodworking in 2004. I purchased the business with two others in 2013, and we became ConceptWorks. I’m 32 years old, and when I was running a company right out of college, I had to combat the prejudice that came with having a young face. I had to earn respect in all circles, from customers to employees.

Another big challenge was working through the recession. It really hit us in the fourth quarter in 2008 and lasted until the first quarter in 2011. I had to make a lot of grown-up decisions at 29, but we lived through it and we’re growing. What doesn’t kill you makes you stronger. How has your company developed since then? Any major differences?

We have had a lot of growth. In 2009, we literally had 7 people on our payroll. Today we have 29. Quadrupling our size has really led to diversification in both customer base and product offerings. We are integrating rapid prototyping with 3D modeling using Solidworks. It really allows us to prove a joint or technique before rapid prototyping. We are also creating ways to integrate non-wood products like metalwork and acrylic fabrication into our product line. We get a lot of inquiries and we operate our business with eyes wide open – we don’t say no.

Is there an aspect of woodworking that has been especially important in your career?

There’s an attention to detail that comes with woodworking. You can say that with most industries, but in woodworking you have a lot of details to consider like tolerances, warping and finishing. The attention to detail has allowed us to be thorough with our customer base--addressing everything up front with customer.

Tom DeBruin, my high school woods teacher, taught us it’s the little things that matter—The differences between routing or sanding an edge, or using progressive sanding techniques as opposed to cutting corners. In woodworking, you need that attention to detail. Cutting corners just doesn’t make sense.

What advice do you have for younger woodworkers who are either starting out, or are getting ready to start their own businesses? What do you wish someone had told you?

Stay with it. There’s a lot of pressure to pursue a career as a doctor or lawyer, but the world needs people who have a hands-on skill set. We will need them even more as the baby boomers retire. Those who are in trade schools right now are in a great spot. There will be a lot of jobs opening within the next 15 years.

Any trade schools you recommend?

Fox Valley Technical College and Lake Shore Technical College. I really treat professors as my first line of defense when screening for a candidate—if they aren’t willing to show dedication in school, when they are paying for it, it’s not likely they will demonstrate it in the workplace.

I reach out to Mark Lorge at Fox Valley each year and ask, “Mark—who is your stud this year?” He brings classes to tour Concept Works, and I keep an eye out to see which ones are really showing dedication and which ones are goofing off in the back. The kids don’t realize it at that time, but the world is methodical in that way. They could be interviewing without even knowing it.

I also use LinkedIn and Facebook to screen candidates. I find there’s a big difference between someone doing a keg stand and someone holding up a fish. It’s a real representation of character. Anything they should avoid?

They should avoid taking their dynamic for granted, being complacent and taking the easy path.

Saying “I don’t know,” or “I can’t” is not an acceptable answer.

Do you think you have what it takes to be named Young Woodworking Professional of the Year? Enter now! CMA to host roundtable at AWFS: What's your problem?