VANCOUVER, B.C. -- For the moment, reports Madison's Lumber Reporter, it seems the North American construction framing dimension softwood lumber market has found a supply-demand balance, as the benchmark price drops slightly but many others remain flat.

In the week following Easter, sawmills, and wholesalers seemed to find good price levels that attracted back customers who may have been waiting to book purchases. Suppliers reported robust sales on continued plump inventories, while buyer enthusiasm pushed sawmill order files into early May.

Good spring weather brought increased construction activity in many markets across the US, while Canada was hit by cold weather and snow. The snow will melt, and the building will soon move into high gear across Canada as well, according to the survey.

US housing starts in February were up, indeed reaching highs not seen since mid-2006, however, building permits were down compared to the previous month.

Total housing starts in the US for March 2022 increased by +0.3% from February to a seasonally adjusted annual rate of 1.793 million units. This is an almost +4% improvement from the same month one year ago when it was 1.725 million.

The backlog of houses approved for construction that are yet to be started increased by +2.9% to yet another all-time high of 280,000 units in March. Indeed, the number of single-family properties under construction continued to climb, reaching 811,000 — the most since 2006. Such a backlog points to a robust pipeline of work for builders in the months ahead.

When looking at the inventory of homes on the market, it is important to note that existing home sales, which comprise over 88% of total sales, have few homes on the market. This strongly suggests continued new home-building activity.

March starts of single-family housing, the largest share of the market and construction method which uses the most wood, was 1.200 million annualized, down by -1.7% compared to February, when it was 1.221 million. Building permits are generally submitted two months before the home building is begun, so this data is an indicator of May construction activity.

After showing big jumps year-over-year for most of the past year, March 2022 single-family starts are down -4.4% compared to one year ago when they were 1.255 million units. 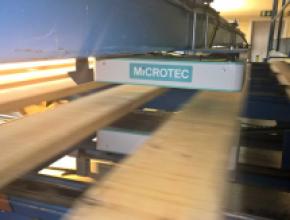