Tony and Kathy Everett with some of their team members in the cutting room at Millwork on 31st in Charlotte, North Carolina.

A lot of the narrative on modern manufacturing automation has to do with using technology as a substitute for employees. This is especially true in the woodworking industry where finding skilled workers is routinely listed as the number one problem. But when Kathy and Tony Everett bought Millwork on 31st in Charlotte, North Carolina, they had a different vision for what automation could do.

The Everetts came to the woodworking industry from a non-woodworking background, but they were well versed in running a manufacturing business and using lean manufacturing techniques. They had bought a school bus seating company in 2006, which they grew from a $6 million operation to more than $20 million in sales. They sold that to a family-owned conglomerate, and Tony took over management of that division in the conglomerate while Kathy handled sales. Together they helped grow the division to $140 million.

When they retired from that, they started looking for a different kind of business opportunity, and they purchased Millwork on 31st, which specializes in commercial casework, hospitals, storefronts, and high-end architectural millwork. Current projects include work on the 52nd floor of the Bank of America building in downtown Charlotte and the Honeywell headquarters in Charlotte.

The previous owner had started the business 29 years ago in his garage. The Everetts have had the business for just two years, but in that time they have been able to double the size of the operation while keeping the same head count of about 40 employees.

“The ex-owner started it out of his garage and was successful,” said Tony. “But like most mom-and-pop shops, it got to a point where his success outgrew his business capabilities. He loved being in the shop, not the office. What we have done now is take the office segment away from the business and let the true woodworkers really run the business, and we take care of the administrative headaches for them.”

In the same 30,000-square-foot facility, Tony said they now produce three times the number parts the previous operation did in the same space.

“We took our cutting room and with the edgebander all in line, so everything’s in line,” said Tony. “One-operator now runs the cutting process, where it used to have four people.”

All the automation was tied closely with lean manufacturing principles and an overarching goal to not only improve the productivity and capacity of the business, but also to improve the working conditions and compensation for their employees.
While the automation allowed for fewer workers in the cutting operation, Tony emphasized, “we did not eliminate any of those other three people. They’ve been absorbed into the growth of the business. That’s the whole premise about lean. You use lean as a factor to drive the growth of your business and then increase the livelihood and the quality of life for your employees.”

All onboard with lean
While many companies struggle to get long-time employees to buy in to lean manufacturing principles and practices, the Everetts’ emphasis on connecting manufacturing improvements to boosts in wages and benefits helped build enthusiasm for the changes among workers.

“We started our first year really organizing business and cleaning it, refining it, educating the employee base, showing them a vision,” said Tony, “That process saved so much money, we basically were able to raise wages in our company by over 30 percent. That got the motivation of the workforce.”

“We’ve got great talent, a mix of industry veterans with up-and-coming talent, and we’re their coaches, we’re their mentors,” said Tony. “We bring capital to the table, and we helped them resolve issues that they have with day-to-day business and give them advice and stewardship and leadership that they need.”

Other automation benefits
CNC automation has brought a lot of benefits to Millwork on 31st. That includes a dramatic increase in the quality of products, reduction in defective parts, and better working conditions that allow older skilled workers to continue working.

“It’s changing the expectations because the equipment forces you to make better piece parts,” said Tony. “When you can make more good products in the same amount of time it gives a lot of pride to the team.” He added that it has allowed them to upscale their standard quality offerings.

It also allows them to take on more work while maintaining, even increasing quality. “We look at scalability,” said Kathy. “All of our decisions are based on scalability. That’s a good benchmark to use, and it’s been successful.”

CNC automation and robotics have also made for a safer, less physically demanding work environment. “One thing about the woodworking industry that I’ve noticed quick,” said Tony, “like a lot of other heavy-duty American industries, skilled labor is aging and it’s up to management to find ways to extend the careers of the talent they have. What we have done with the lean and the automation and the robots on the front end of the business has done just that.” He added that the company has gone over two years without a serious accident.

“You see workers in their 50s, 60s, and early 70s able to still continue on their career, whereas we had the old Rover, and there was a gentleman in his mid-50s, and he was slumping out 100 sheets of melamine a day and manually pushing them onto an old Rover. You knew his days on that job were numbered. (With automation) he can stay in that position and run it well now for as long as he wants.”

Metrics drive improvements
The Everetts described the plant as previously having “aged equipment.” They applied modern manufacturing metrics to the operation, monitoring downtime and the like.

“One of the first exercises, (was) how often was the old edgebander broken down,” said Tony. “How many man hours go into fixing it? How much did you lose in production that couldn’t go out the door?”

They educated employees to apply similar metrics to processes and waste. Tony described a situation where the older building had narrow doors that made unloading trucks difficult and time-consuming. Spending $8,000 to widen the doors eliminated a lot of frustration and solved that problem, changing unloading from more than an hour to a 10-minute job with a forklift.

“When you empower supervisors to make decisions like that, they come to you with that math,” said Tony. “You just empowered them to make a decision. It’s absolutely awesome to see.”

Still custom
One thing that some people fail to grasp amid all this talk of automation is how much of the work Millwork on 31st does that is truly custom. “I like the term high volume, high speed, job shop,” said Tony. In that environment they can have multiple projects going on simultaneously in the facility.

The Winstore material handling system keeps track of mixed colors and types of material in the stacks of sheet goods, feeding the routers with the right material and resorting the stacks as necessary. That means there is no wasted space in the stacking and no waste in changing from one material to another.

Both Tony and Kathy Everett are committed to the wellbeing of their employees as just good business. “We invest in employee morale.”

You can hear our complete interview with Tony and Kathy Everett of Millwork on 31st on the Woodworking Network Podcast at woodworkingnetwork.com/podcasts (or listen using the web player above). 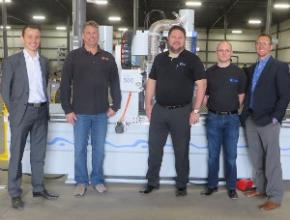 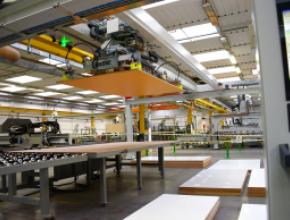