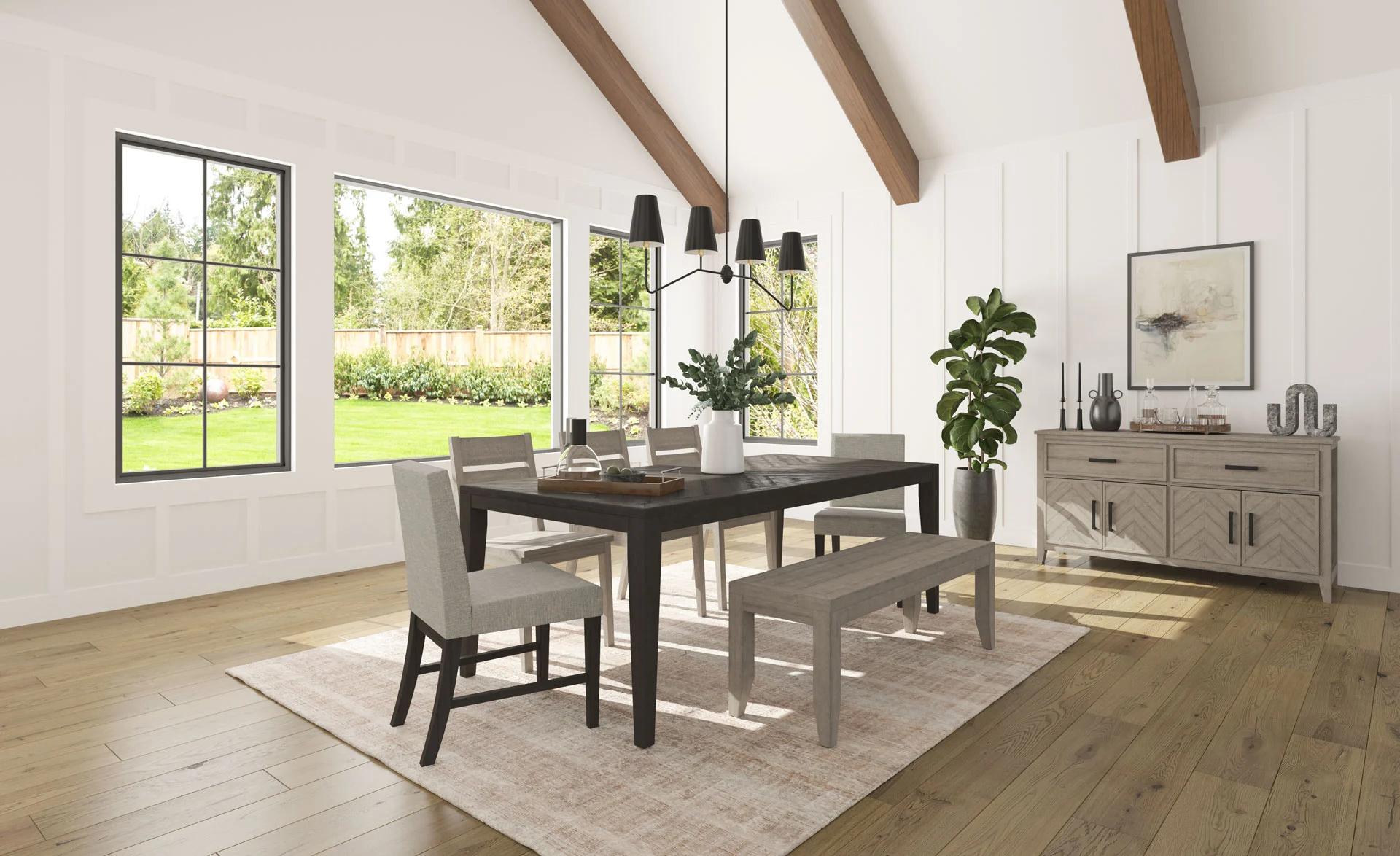 “Historically, we launch a bedroom group first, and then build on its success over time with the addition of correlated dining and home office collections at subsequent markets,” said Tim Newlin, vice president of product management. “Our goal with Chevron is to make it easier for retailers to make a major impact on their floors, refreshing their assortment with pieces that work cohesively throughout the home. At the same time, feedback from our dealers throughout the past year-and-a-half has made it clear that consumers now are seeking better quality goods across the board, and we know they equate solid wood with higher quality.”

Constructed of solid pine and featuring subtle V-shaped pattern details, Chevron is available in a choice of two finishes, Stone and Ebony. “The key to Chevron’s appeal was to bring the beauty of the organic materials to life with low-sheen finishes,” Newlin said. 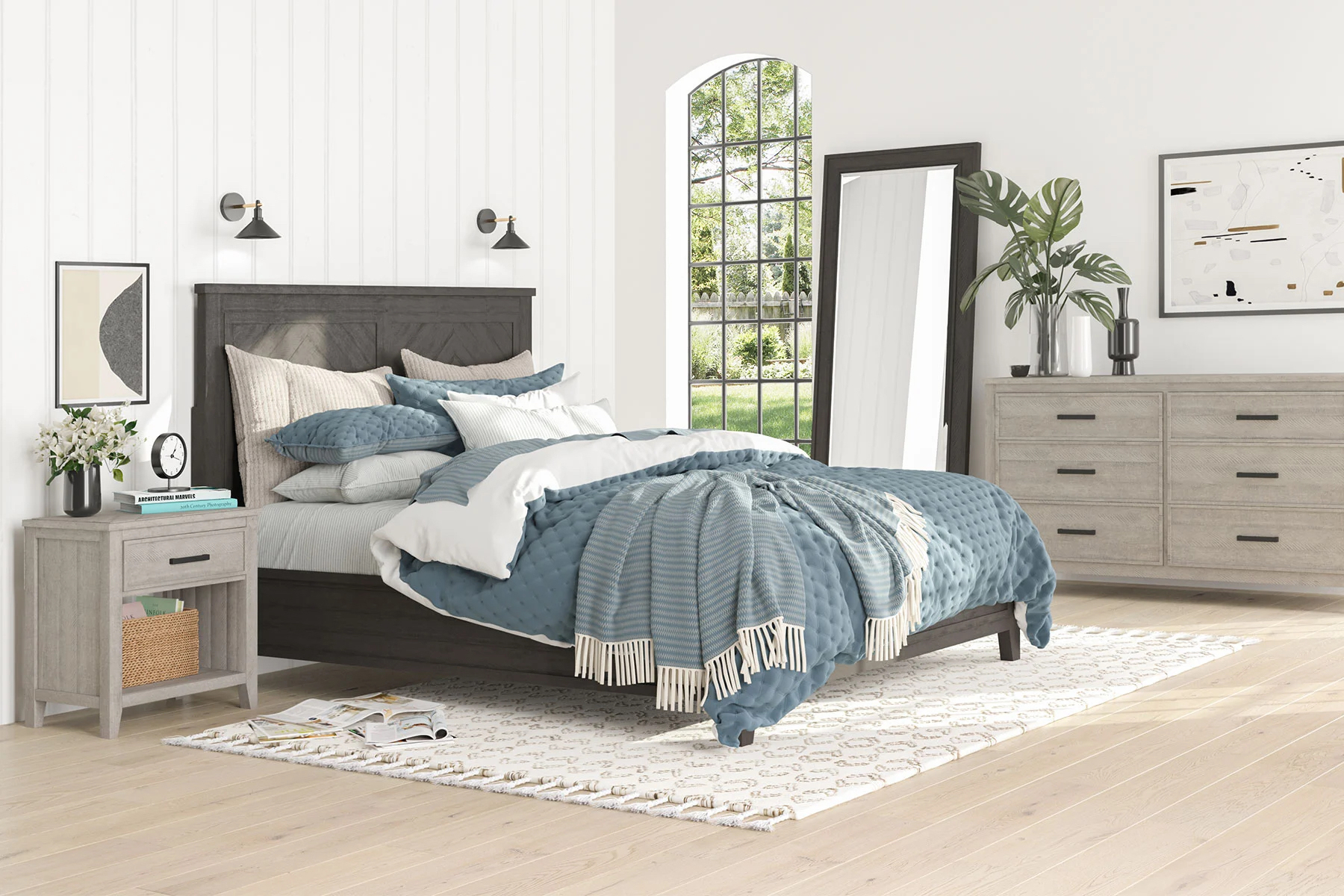 In the bedroom category, “All of the case tops feature the chevron design, which adds visual interest while keeping the drawer fronts clean and simple,” Newlin described. “Nightstands also feature power and USB ports on the backs for added function.”

Dining options play to consumers’ desire for less formal spaces with plenty of options, and in particular, smaller-space solutions. “In the past, we’ve largely focused on very traditional looks with leaf extensions, but the goal here was to create a more casual collection that suits the way we live today,” Newlin said.

"Trendwise, he added, "we’re finding that consumers are loving mixing design elements and style stories, classical and contemporary, modern and traditional, as well as high-contrast looks with dark tables and light seating, or vice versa.” Chevron addresses this with multiple chair styles, a bench option, and thicker tabletops that play up the rustic, natural appeal. “Of course, we’ve built power into the serving buffet for added function and ease when entertaining,” he added.

“We’re really excited about the new occasional groups because we believe the solid wood option at value price points will be unique to us in the marketplace,” he said. “Additionally, getting the scale right was very important because we wanted to ensure that Chevron occasional pieces would work well with our core seating in both apartments and condos, as well as larger, suburban homes.”

In the home office category, Newlin said the design team set out to create an offering scaled for those without large, dedicated home office spaces. “It became apparent that as more and more people worked remotely during the pandemic, not everyone had an empty guest room that they could easily convert,” he said. “So too many people ended up working at their kitchen tables and have the aching backs that came along with that. Plus, we know that many parents who are also home-schooling children, want to keep an eye on their students while they are working. Chevron is designed to solve those needs, with desks that can be tucked virtually anywhere in a home, up to and including a hallway.

“Even more important, in designing Chevron, we wanted to solve the ergonomic issues consumers have been facing,” he continued. “We’ve found that a lot of the desks currently in the marketplace include storage underneath that precludes proper knee clearance. And, unlike commercial office furniture, you are either sitting too low or too high to type easily or to see your monitor without straining your neck and shoulders.”

Consumers can build their office up or down, personalizing the configuration for their needs with movable storage pieces that work for either the right- or left-hand, and to make everything ergonomically correct.

Headquartered in Dubuque, Iowa, Flexsteel Industries is ranked 28 on the FDMC 300, a list of the largest wood products manufacturers in North America. 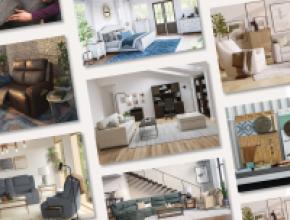 Young customers don't care that you've been around for 100 years, says Flexsteel as it updates brand 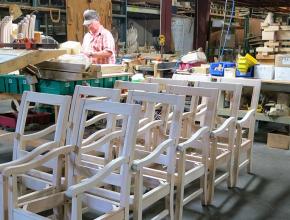 Despite stronger sales, Flexsteel is impeded by foam, container shortage 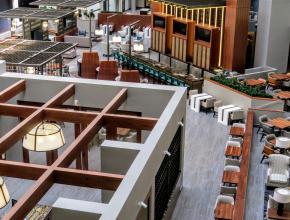