The career path of Ethan Harrison, representing the U.S. in the Cabinetmaking at WorldSkills, will be related at the 2019 Executive Briefing Conference.

MADISON, Wisc. -  Training for WorldSkills is like training for the Olympics. A lot of countries take it very seriously, with competitors training full time for up to two years before the event.

The U.S. recently decided to up their game as they prepare to send a contingent of skilled craftspersons to the world competition in Kazan, Russia, this coming August.
Ethan Harrison, from Blackfoot, Idaho will represent the U.S. in the Cabinetmaking competition. He was selected from a group of four finalists who competed at the SkillsUSA national competitions in Louisville, in 2017 and 2018. SkillsUSA agreed to support Ethan’s training by allowing him to attend our program in Madison under the tutelage of Madison College instructor Jeff Molzahn. 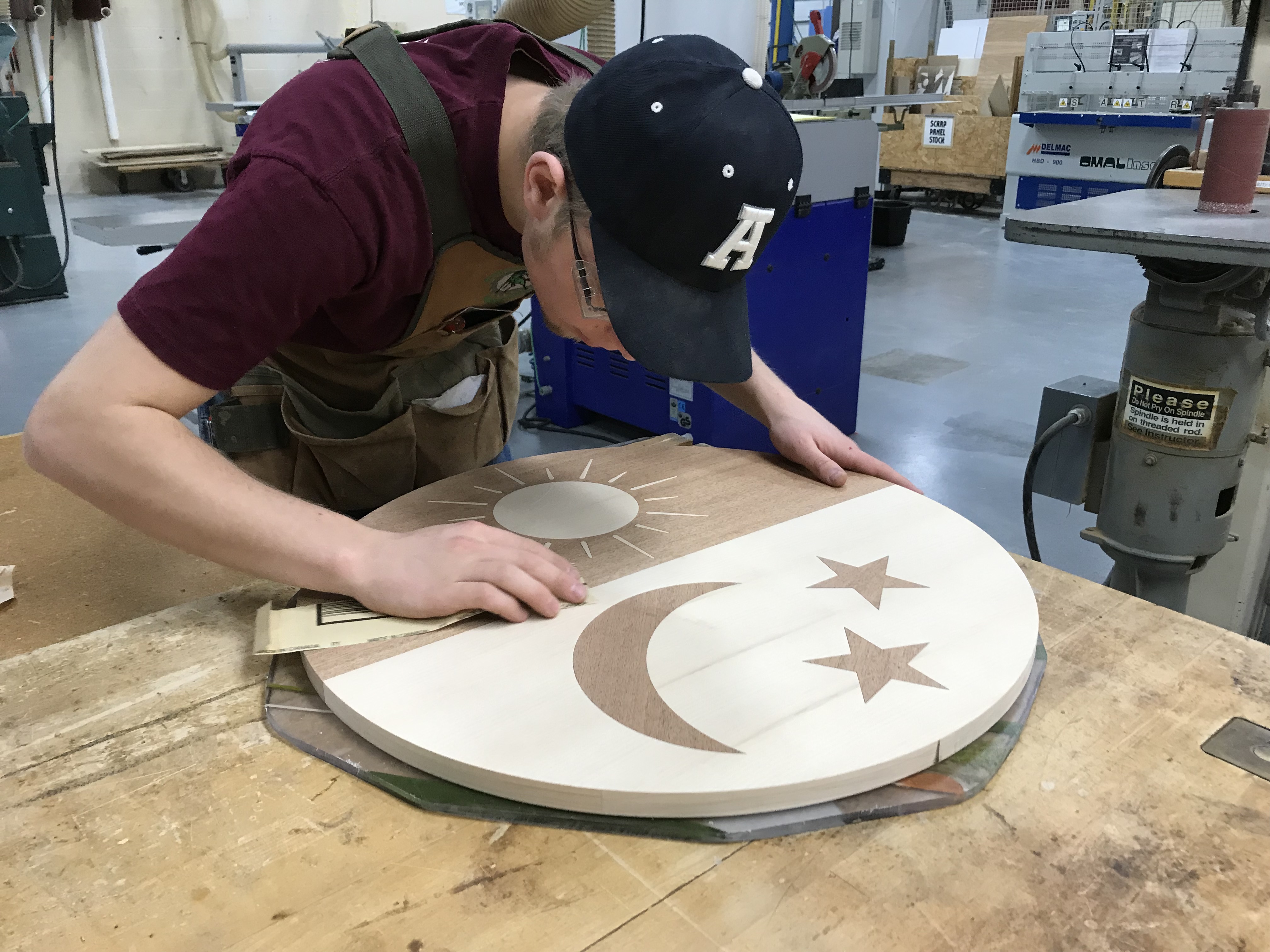 Ethan Harrison is studying veneering and joinery at Madison College.
Ethan arrived in Madison last October and made a strong impression from the start. He is like a sponge, absorbing our learning materials and seeking advice. One of the goals for Ethan’s training program is to experience an international competition prior to traveling to WorldSkills. Ethan found an event in Austria, applied, and was accepted.
To qualify for the event, Ethan had to submit a project for consideration. He designed a small table with a veneered top. He is scheduled to travel there in March to participate in the International Young Adult Furniture Making Invitational. Ethan’s long term goal is to run his own business building furniture and custom cabinetry.
SkillsUSA provided a platform to compete and standout—especially for a kid who wasn’t sports-oriented. Along the way, he has learned a great deal about himself and became a better leader.
Ethan was inspired by his friend Rhett, who was killed in a tragic motorcycle accident when Ethan was a junior in high school. Rhett competed in cabinetmaking at nationals the year before Ethan. Losing his friend sparked a desire to carry forward his legacy and helped him decide that woodworking was what he wanted to do for a career.
When asked what the most important thing he has learned since coming to Madison College, Ethan replied, “A lot of new ways to do things, including the importance of being accurate when measuring.” This humble young man also has a few words of wisdom which he shares daily with his fellow students: “Make good choices and remember who you are.”

Patrick Molzahn heads the Cabinetmaking and Millwork program at Madison College, which provides students a strong understanding of modern woodworking techniques and equips them for success as a cabinetmaker, finish carpenter, or one of many other jobs that make use of this knowledge.

In April, at the Executive Briefing Conference, Molzahn will moderate a panel of wood industry educators, and will also present the opening dinner address on the Woodwork Career Alliance career credentialing program. Ethan Harrison will be among the aspiring woodworkers described during Molzahn's presentation. EBC 2019 runs April 14-16 at the San Jose Marriott. About the author
Patrick Molzahn | Educator
Patrick Molzahn, Cabinetmaking & Millwork Program Director, Madison Area Technical College
Originally trained as an architect and sculptor, Patrick Molzahn discovered his love for building while spending his college summers working as a carpenter.  Believing that if you can build a boat, you can build anything, Patrick went on to study Traditional Wooden Boat Building.  After Boat school, he opened a one man shop specializing in Architectural Woodwork and custom furniture.  Since the fall of 2000, Patrick has been the director of the Cabinetmaking & Millwork program at Madison Area Technical College, in Madison, WI.
In 2008, he received the distinguished WMIA “Educator of the Year” Wooden Globe award. Over the past four decades, he has traveled around the world researching how other cultures train their woodworkers. He is a founding board member of the Woodwork Career Alliance of North America, and in 2018, he became the first individual to earn the WCA’s highest honor, the Diamond Credential.
Patrick is the author of the 5th edition of the classic text, Modern Cabinetmaking, and his writings have appeared in numerous publications, including Woodshop News, Fine Woodworking, and Fine Homebuilding.  An avid hiker, Patrick has explored trails on five continents, and in 2016, completed over 1300 miles of the Appalachian Trail.