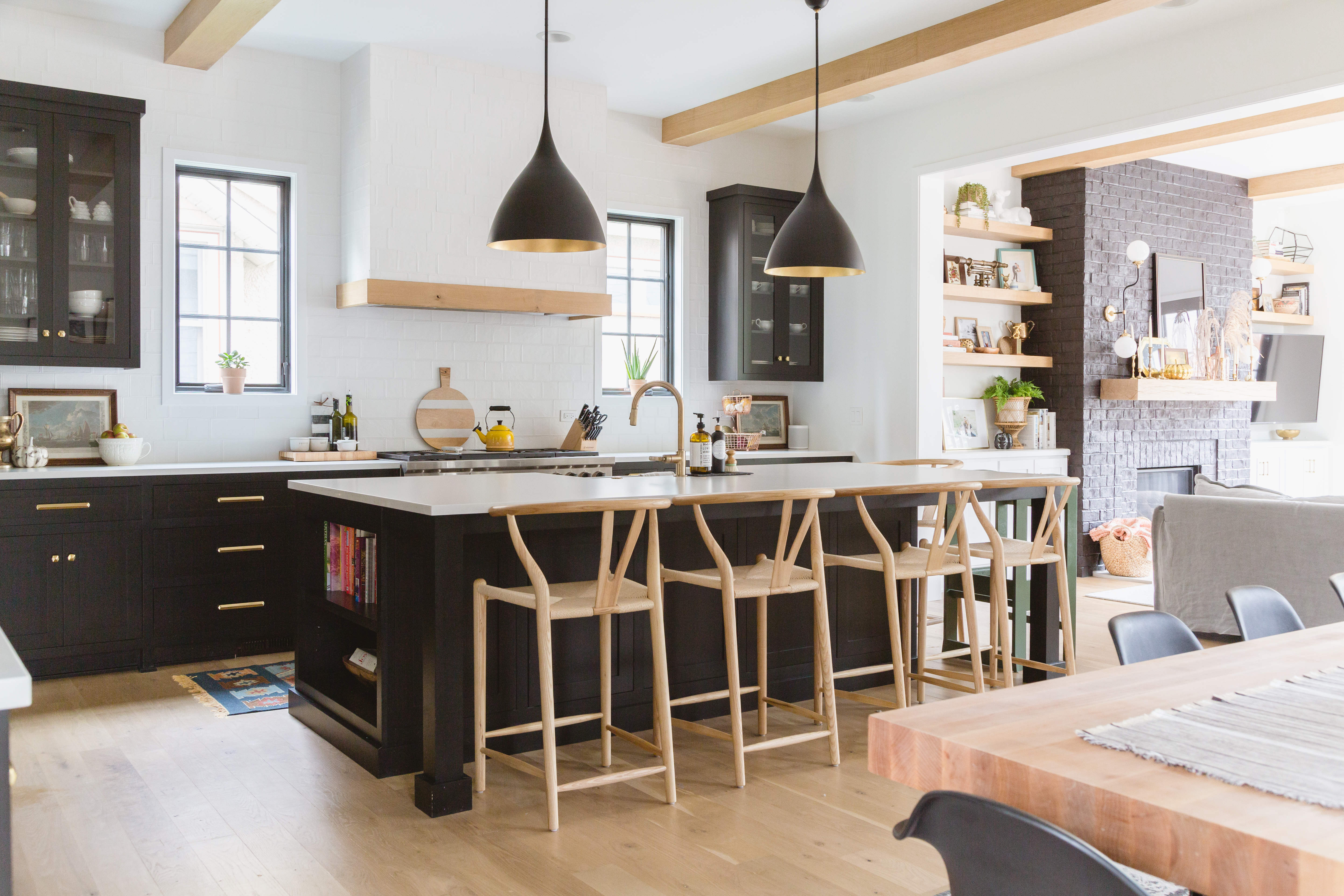 PALO ALTO,  Calif. -  Large islands continue to be a prominent feature in renovated kitchens, according to the 2020 Houzz Kitchen Trends Study. The survey of nearly 2,600 U.S. homeowners using Houzz who are in the midst of, are planning, or recently completed a kitchen project, found that nearly two-thirds of renovated kitchens feature an island (61 percent). One third of homeowners add an island during renovations (33 percent), while nearly a quarter upgrade an existing island (22 percent). Islands are sizable features in kitchens, with a third measuring more than seven feet long (32 percent) and another 39 percent six to seven feet long. In addition to their substantial physical presence, islands are a hub of activity from dining (58 percent) to entertaining (49 percent) to socializing (45 percent).
When it comes to appearance, many choose island finishes that stand out from the rest of the kitchen. Two in five homeowners adding or upgrading their island cabinets opt for an island cabinet color that contrasts with their main cabinets (39 percent), led by gray (26 percent), blue (19 percent) and black (11 percent). Contrasting countertop colors are also common among those updating their kitchen island countertops (29 percent), including white (23 percent) and medium wood (21 percent). Among homeowners choosing contrasting countertop materials when updating their island (26 percent), butcher block tops the list (41 percent). Nearly all new islands have storage features (98 percent), and over half (52 percent) have built-in appliances including microwaves (32 percent), dishwashers (31 percent), garbage  disposals (24 percent), cooktops (21 percent) and beverage refrigerators (nine percent).
Financial investment in kitchen projects continues to grow, with median spend on major kitchen remodels* completed in mid-2019 at $35,000, up 17 percent from a year ago ($30,000). However, while many homeowners opt for complete kitchen overhauls, the breadth of kitchen renovations has been scaled back for the second year in a row. For example, upgrades to countertops and sinks are not as widespread (89 and 83 percent, respectively) compared with two years ago (94 and 90 percent). Similarly, structural upgrades are not as frequent, including opening the kitchen to other interior rooms (46 percent), changing kitchen layout (46 percent), or adding square footage (35 percent). 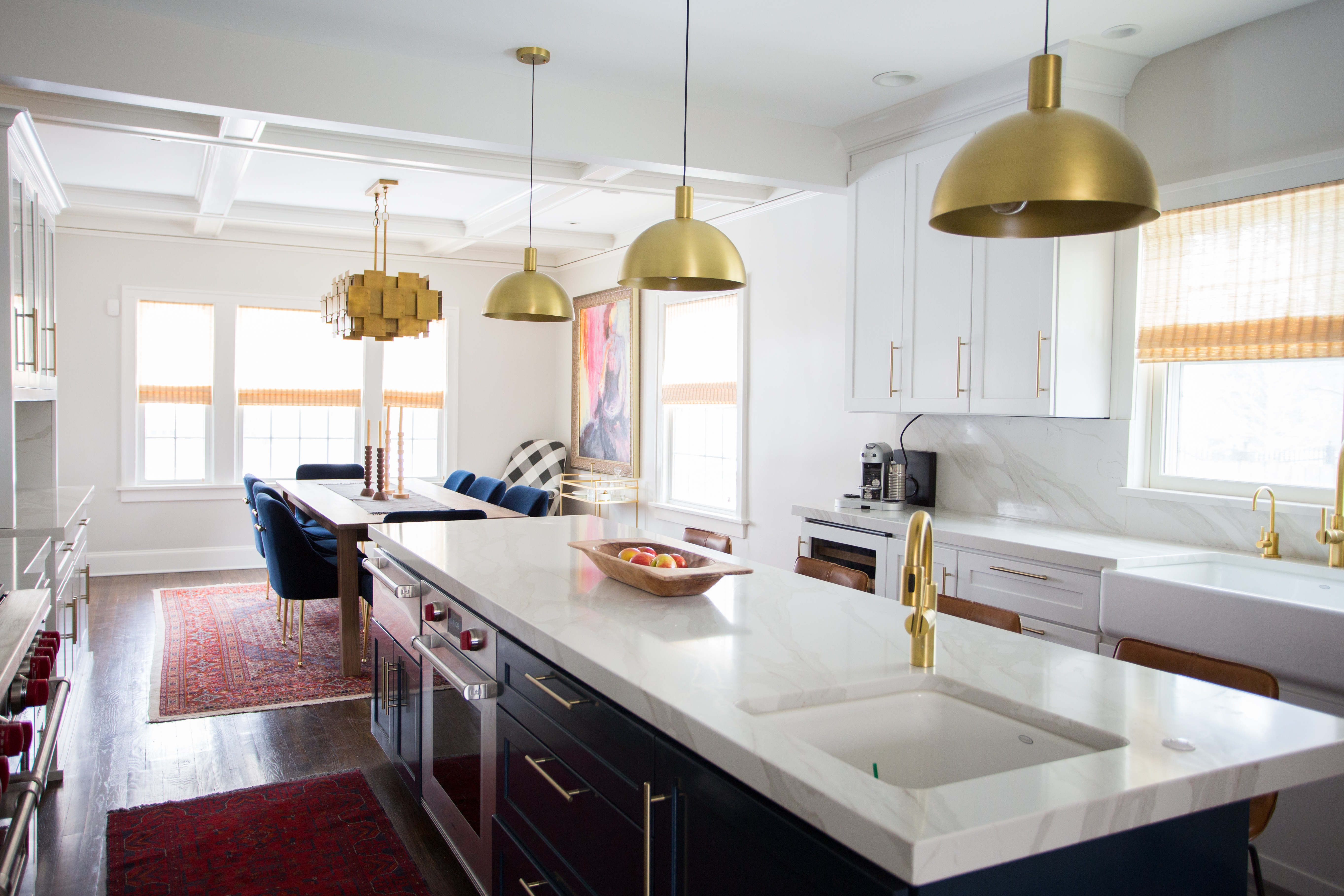 Photo: Jessica Cain © 2018 Houzz
“It is remarkable to see median spend on kitchen remodels grow by double digits for the third year in a row,”  said Nino Sitchinava, Houzz principal economist. “Combined with a two-year decline in the scope of kitchen remodels, spend increases confirm our findings of significant price inflation in the home remodeling industry due to changes in international trade policy. Homeowners are dealing with increasing product prices by substituting materials, as indicated by slower growth in the use of engineered quartz and a decline in the popularity of engineered flooring materials, highly impacted by tariffs on imported materials from China.” 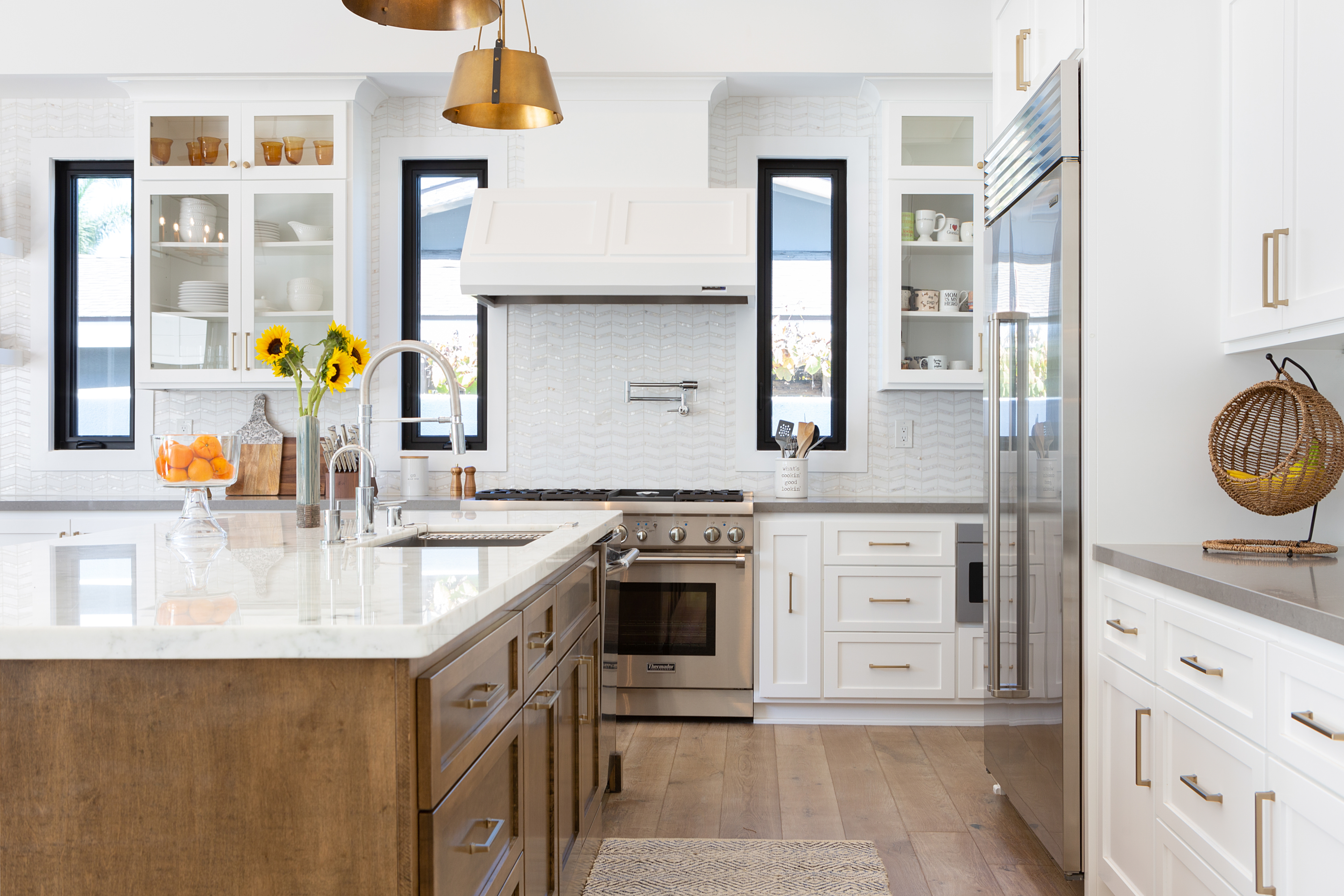 Styles trend transitional:
Among the 85 percent of renovating homeowners who change their kitchen style, transitional, contemporary and modern top the list (21, 16 and 15 percent, respectively). Farmhouse style appears to have peaked last year, with a surge in 2018 to 14 percent, then
falling to 11 percent in 2019.
Backsplashes make a statement:
One in ten homeowners upgrading a backsplash goes bold, installing it all the way to the ceiling (11 percent). Another 63 percent install tile from their counter to upper cabinets or range hood. When it comes to color, white is the most popular (35 percent),
followed by multi-colored (20 percent) and gray (15 percent).
Vinyl flooring on the rise:
Vinyl flooring, the third overall choice in renovated kitchens, continues a three-year climb from 10 percent in 2018 and 12 percent in 2019 to 14 percent in 2020. Leading flooring choices, among those upgrading their flooring, are stained or unstained hardwood
(29 percent) and ceramic or porcelain tile (23 percent).
White and hardwood hold steady:
White continues to be the most popular cabinet color (45 percent), followed at a distance by medium wood (11 percent) and gray (10 percent). More than half of homeowners install wood-colored flooring (52 percent), likely tied to the popularity of open concept
kitchens.
Recessed lights reign:
Recessed lights continue to be the most popular light fixture upgrades (69 percent), followed by under-cabinet and pendant lights (65 and 56 percent, respectively). Not surprisingly, 92 percent of homeowners upgrading their islands choose new lighting above
the island, with pendants being the most common option (66 percent).
High-tech growth slows:
While high-tech features remain popular among those upgrading faucets and appliances, their growth has slowed slightly. Half of upgraded faucets are high tech (51 percent versus 57 percent in 2019), boasting water efficiency, no-fingerprint coating or touch-free
activation. Similarly, a quarter of major appliances feature high-tech features (25 percent versus 30 percent in 2019), with wireless controls leading the pack.
Hiring of professional help has remained steady over the past several years, with more than four in five homeowners hiring professional help for their kitchen renovations (85 percent). General contractors top the list (51 percent), followed by kitchen designers (22 percent), interior designers (13 percent), architects (11 percent) and kitchen remodelers (10 percent).
Click here for the full 2020 U.S. Houzz Kitchen Trends Study.
The “U.S. Kitchen Trends Study” is an online survey fielded to U.S. Houzz users between June and July 2019.