When it comes to efficiency, building hardwood caskets is no different than manufacturing any other competitive wood product. “We sell to distributors who are buying in bulk,” explains Louis Tobia, Jr., the third-generation VP at New England Casket Co. and immediate past president of the Casket and Funeral Supply Association of America. “These customers warehouse our stock and can ship within hours.”According to government statistics, nearly 2.6 million people die in the United States every year. Of those, some 1.5 million are what the funeral industry terms as casket deaths. “It is a very competitive market,” Tobia, Jr. says, noting that while his family’s 78-year-old firm is based in East Boston, MA, it sells nationally.
The company that his Italian immigrant grandfather founded now “competes against three other large companies and a handful of smaller casket manufacturers as well as imports from China.”
Cutting Man Minutes 70%
Keeping costs down is a key to efficiency, and, to its credit, New England Casket Co. has been able to do so, without laying off any of its 62 full-time employees. “We’ve cut overtime hours, sure,” Tobia reports, “moved some people around and need less seasonal help during our peak winter months. But there have been no layoffs.” So how has New England Casket Co. stayed competitive for more than three-quarters of a century, since the late 1940s? In the 21st century, at least, the Tobia's have tried to add at least one new piece of upgraded equipment every year. “It is part of our ongoing strategy,” Tobia explains.
Contributing to the company’s lean operations is custom-developed, highly automated woodworking equipment from Canada’s Doucet Machineries. “We can produce up to 60 caskets per shift, and we now can get to that number with less labor,” Tobia says. That’s because last August a Doucet CSS Casket Side Saw and Router was installed in the 100,000-square-foot facility. To assemble and miter casket sides to a specific size, Doucet helped to develop a specific machining process. Prior to the new machine, “there were five separate operations for the sides-and-ends work cell. Now, we can do it with one man on one machine, at the touch of a button,” he adds. In “man minutes,” that equates to a 70 percent savings, says Tobia. “The casket manufacturing business may look simple, but in reality it is much more complex than it sounds,” Doucet says. “It requires dedicated equipment for specific tasks with odd shaped pieces of wood, like a specific radius-curved laminated blank cover that would eventually get cut with a miter saw, glued with a part called fishtail, and then sanded again in a world where a wide belt sander is useless.”
Custom-manufactured, the CSS Casket Side Saw and Router cut sides or ends of a casket, including top and bottom mouldings, in one operation. Equipment features include:
• Two saw modules including two saw motors each, one to trim and one to score the groove. The trim saw can be adjusted in two positions, either vertical or at 45-degree angle relative to the vertical.
• Six laser lights show casket component trim cut position over the assembly area to help the operator to place the part properly in reference to the cut position, and to show where no hold down jigs should be located.
• Adjustable module positions respond to dimensions keyed in by the operator in reference to the center of the part.
• Mobile assembly table to hold the top and bottom mouldings to the casket side, including pneumatic hold down and assembly jigs.
•Two 3-axis machining spindles to mill the lock fixture recess.
•Two 1-axis machining spindles to mill the corner recess.
• A traverse beam with linear rails to support six carriages for nailing guns.
• Touchscreen to key in parameters for a production lot.
New England Casket also uses Weinig moulders, Kenwood ripsaws, a Stiles ripsaw with Cameron automation for rough milling and a computerized CNC router from C.R. Onsrud.
Another piece of custom Doucet machinery added is a Casket Cover Stroke Sander that consolidates rough and finished sanding of three covers at a time into a single step. The number of operators is reduced from three to two, “so one man can handle all the tops,” Tobia says. “That’s 60 panels per day, which translates to eight hours in saved labor per shift.” Tobia notes that there are no more big piles of inventory. “We assemble parts on demand and only store component parts now.” Tobia envisions replacing his 3-story plant. “We could be even more efficient,” he says. “If the industry grows enough, I would love to have a nice, new building with one floor.”

Commitment to Excellence Through Technology

Engineering labor savings is not always easy, especially in the complex manufacturing processes at New England Casket Company. Louis Tobia, Jr., VP of New England Casket, worked with the Process Engineering Division of Doucet Machineries to simplify building casket sides. Time savings in “man minutes,” says Tobia, were 70 percent. “Side and end production used to take 28 minutes per casket,” he says. The time required was reduced to “fewer than 6.5 minutes for these parts.”

That led Pascal Doucet, VP Sales at Doucet, to nominate New England Casket for a WMIA 2015 Wooden Globe Award. The East Boston, MA firm won for demonstrating its “Commitment to Excellence through Technology.” The award was presented at the Woodworking Industry Conference in San Antonio this past April. 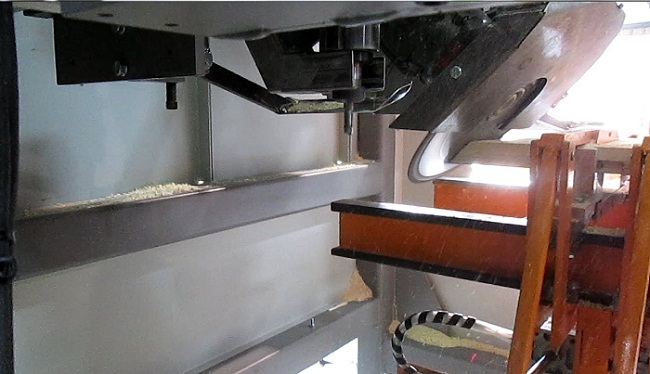