Unlike many of his peers, Gene Ponder, founder of Master WoodCraft Cabinetry and previously founder of Republic Industries, always knew he would eventually end up in the woodworking industry.

“While in high school, when I wasn’t participating in football or track, I worked part time after school and weekends at a cabinet factory one block from school and fell in love with the cabinet industry,” says Ponder.

Based in Marshall, TX, Master WoodCraft Cabinetry is a supplier of kitchen cabinets, counters and kitchen cabinet components, and one of the last five cabinet companies in the United States that is a complete manufacturer, not buying parts from anyone except for metal hinges and drawer guides. The company also owns 80% of its own transportation fleet and performs installations as well, offering a total turnkey package through one supplier.

“In my 52 years in this business, I decided to focus on one segment of the market and be a supplier to multifamily projects that would supply my customers with cabinets and countertops, all on the same truck, 100% complete, delivered by our trucks, and install them on the wall,” Ponder says.

Ponder hopes to grow the company to its maximum potential, starting from scratch in 2008 to 2013, achieving a volume of $45,000,000 with a goal of $80,000,000. He adds that one of the smartest things Master WoodCraft Cabinetry has done was “to build a 250,000-square-foot manufacturing facility with one goal: to environmentally meet all of today’s standards including complete total water-based finishing lines.” He says he is fortunate to have learned the cabinet business at two large cabinet companies, giving him the ability to study the best and worst of each.

Some of Ponder’s proudest achievements include being awarded Entrepreneur of the Year in 2003 for manufacturing by Ernst & Young, as well as growing Republic Industries from 10 people in 1974 to 2,200 people by 2003 and making it one of the top 10 cabinet companies in the USA.

As a company, Master WoodCraft Cabinetry has donated cabinetry to over a dozen Habitats for Humanity homes locally, and has made sizeable contributions to Wiley College. Ponder and his wife also personally donated and built a church for a group of elderly people whose church was falling down.

Outside of work, Ponder has a passion for rebuilding European sports cars from the 30s, 40s, and 50s. “I have amassed a collection of over 50 cars that I consider works of art.”

• Number of years at the company: 8

• Number of years in the industry: 52

•Word or phrase used to describe you: Determined

• Who is the one person you’ve tried to emulate in business and why? General Patton. His philosophy was “forward, onward and never slow down.” 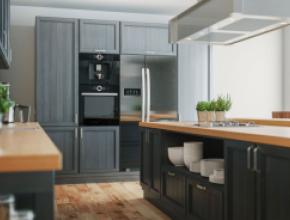