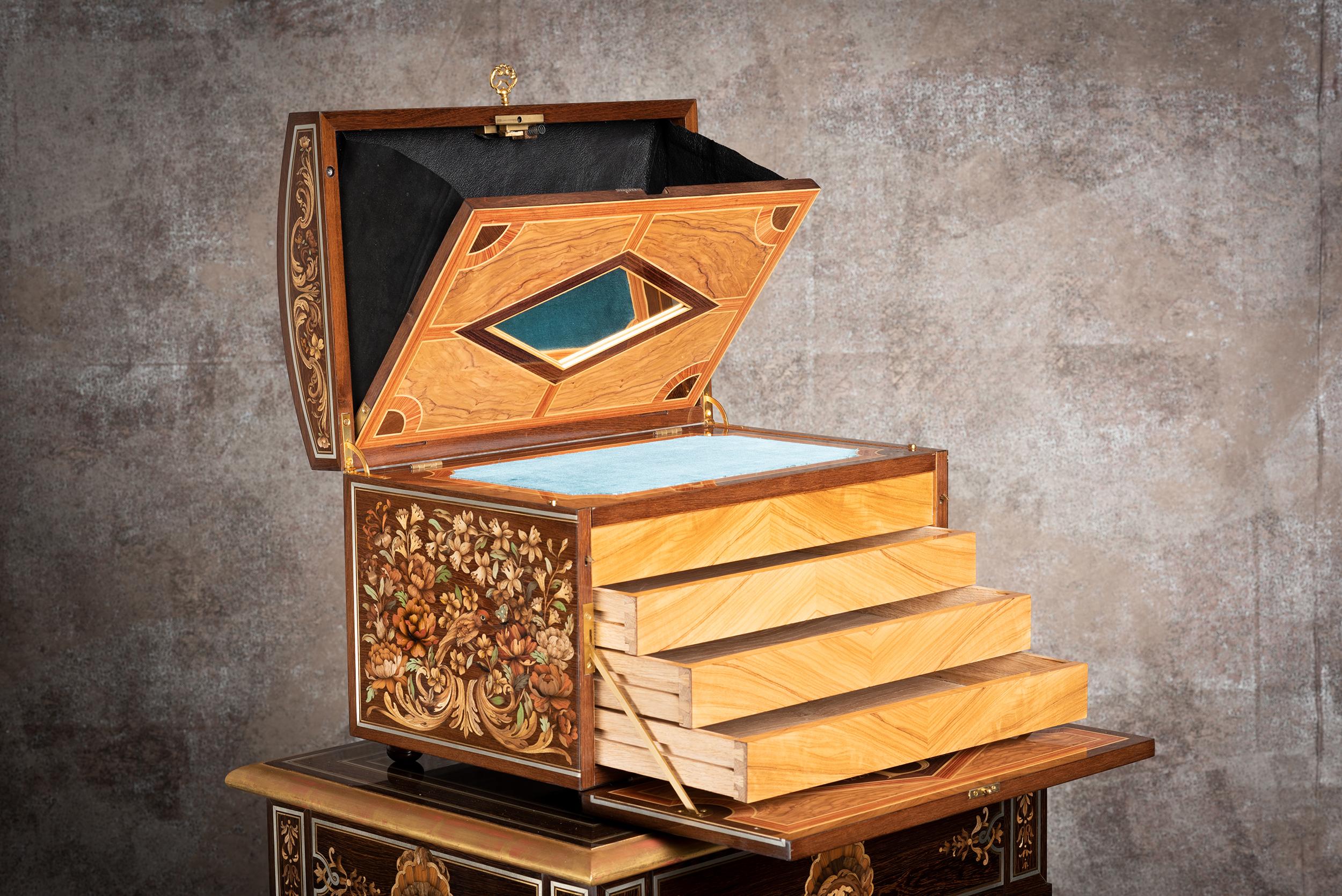 Patrice Lejeune captured the Grand Prize with his “Treasure Box III,” which features spectacular marquetry on the outside with intricate interior drawers and secret compartments

Patrice Lejeune is a furniture maker and marquetry expert who is adept in traditional French marquetry as practiced during the 17th and 18th centuries. His piece, “Treasure Box III,” puts all of that skill on superb display. Inspired by a marquetry coffer attributed to Andre-Charles Boulle and currently in the collection of the J. Paul Getty Museum, the piece was downsized by a third to be more appropriate to modern interiors. The box features spectacularly detailed marquetry tableaus on all sides, featuring 40 different species of wood selected for their historical pertinence. Species include boxwood, espanilla, walnut, cherry, holy, pink ivory, yew, olive, pear, mahoganies, hornbeam, and dyed wood. 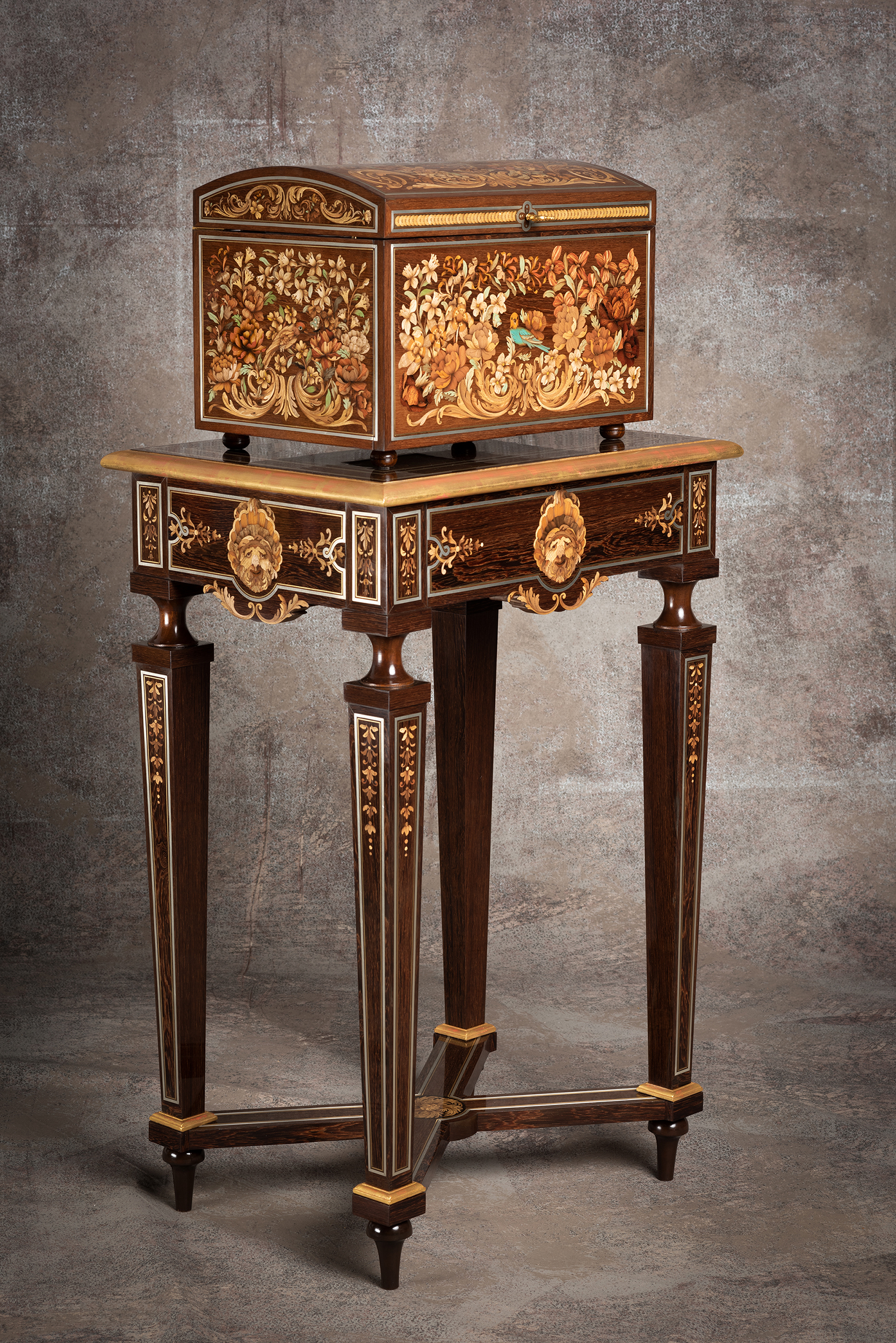 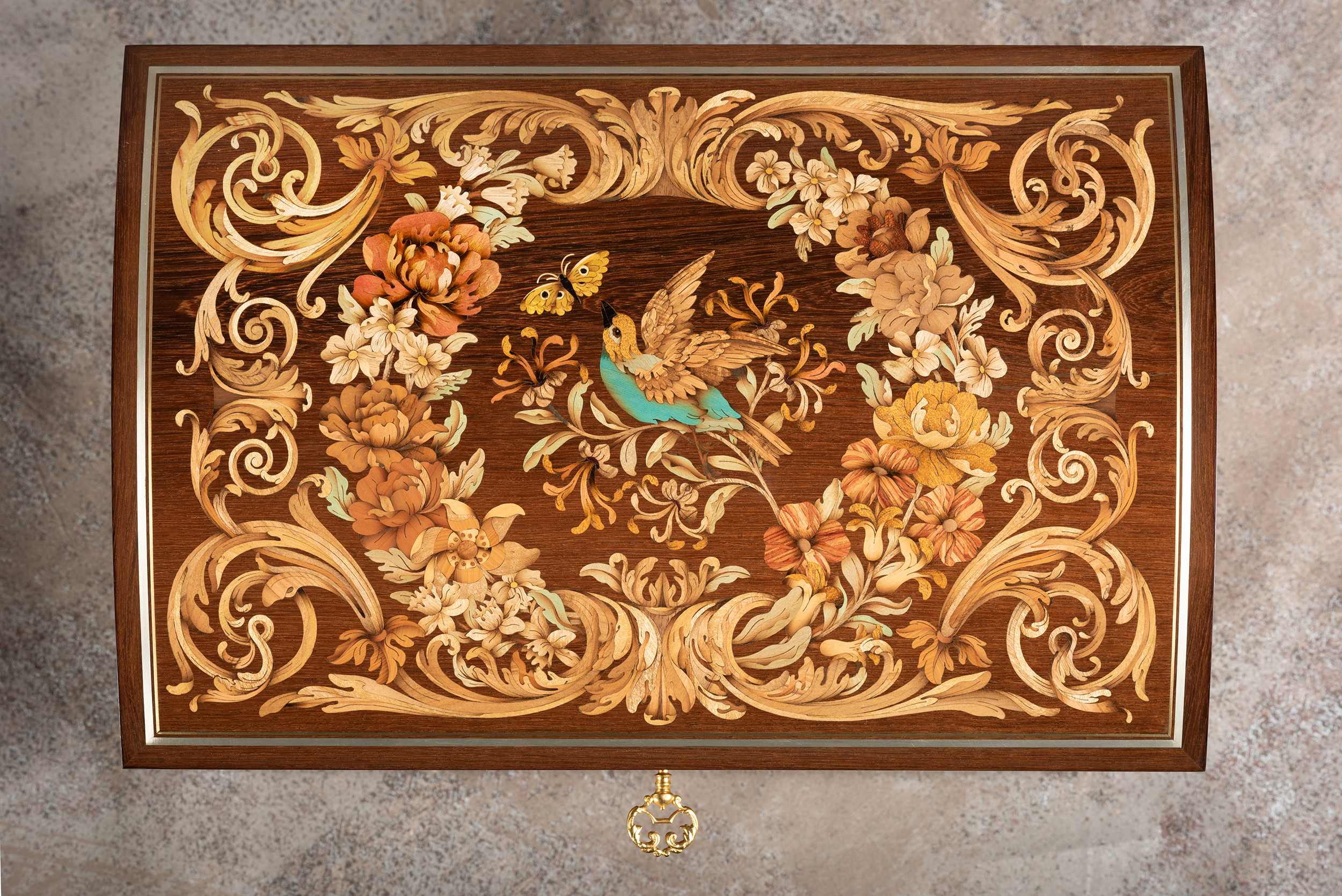 More than 40 species of wood were used in the detailed marquetry in Patrice Lejeune’s Grand Prize winner.

Lejeune designed a series of custom-made mechanisms to operate the different elements of the box. “Inspired by those developed by such cabinetmakers as Roentgen, Oeben, Riesner, some of my mechanisms are totally hidden and activate secret compartments in the box,” said LeJeune. The whole piece was finished meticulously using the French polish technique. 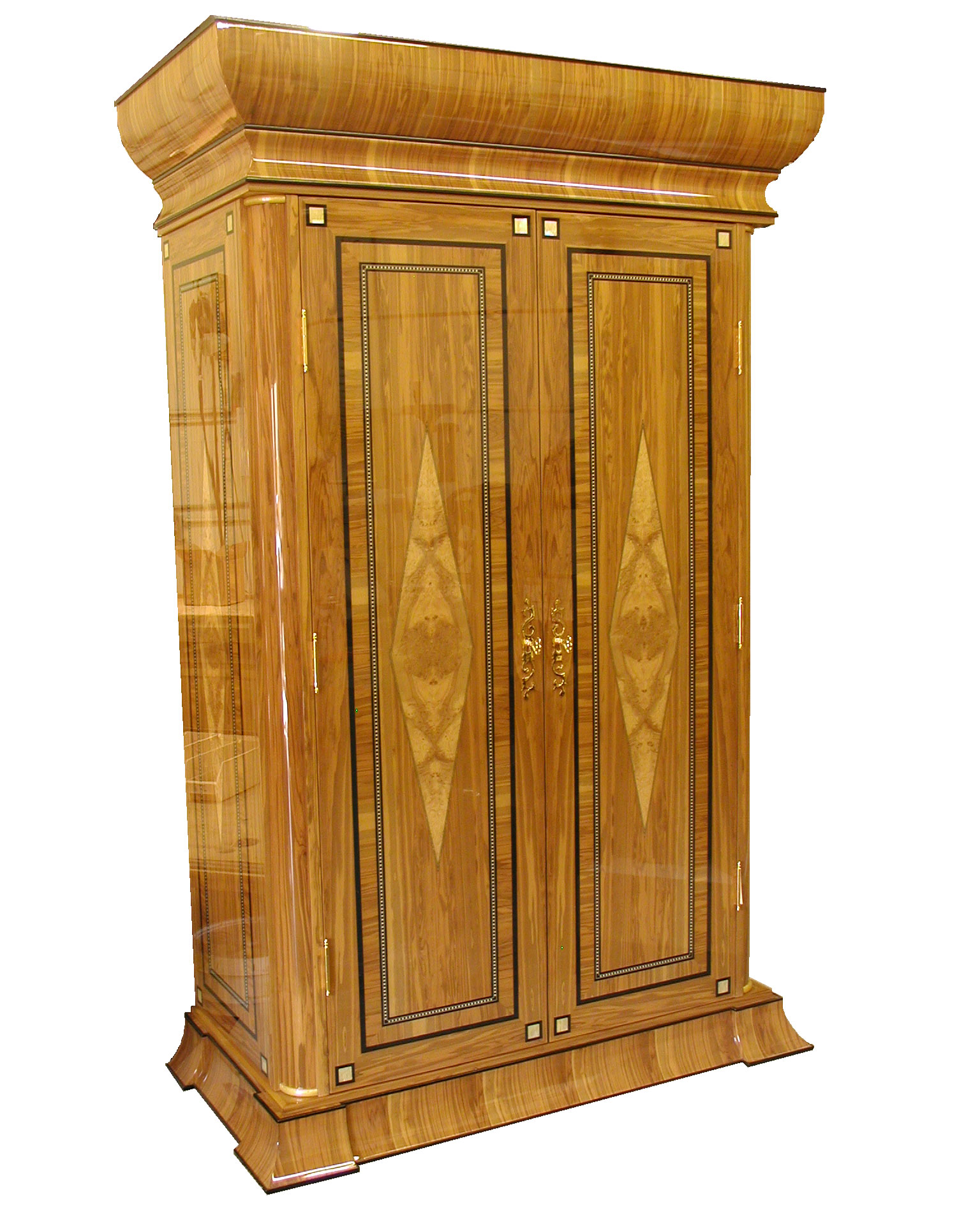 John Harper of EMC Woodworking in Phoenix, Arizona, won the $1,000 prize for the Cabinetry category for his humidor cabinet. Designed to pick up some of the details of a nearby pool table, the wall mounted cabinet features Spanish cedar (both veneer and hardwood), plain sliced olive veneer, gold mother of pearl, ebony, and poplar. The poplar was used prominently for the sculpted details such as the large crown, columns at each corner and base details. Olive ash burl was used for the center of each door. 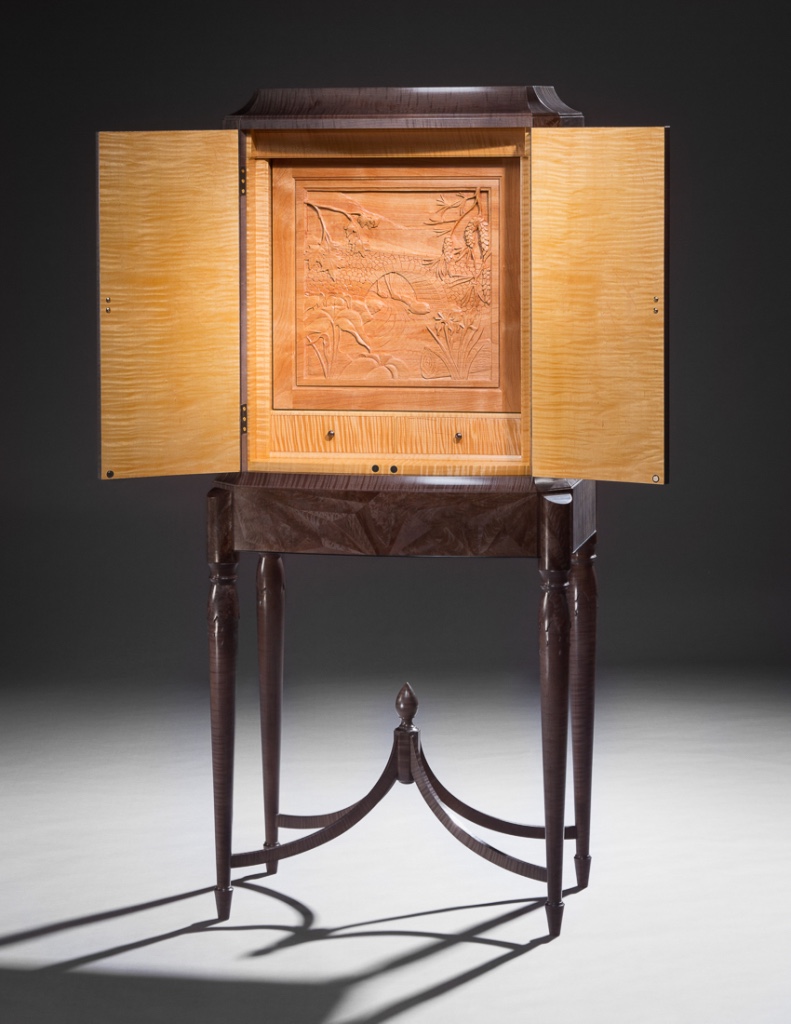 David Lamb, a cabinetmaker in Canterbury, New Hampshire, top honors and $1,000 in the Furniture category with his piece called “Four Seasons of Acadia.”

The piece was commissioned and is owned by The Gallery at Somes Sound, Maine, to commemorate Acadia National Park.

Lamb said he used shop-sawn crotch veneer processed from white birch. “I composed the pieces in a fractal ice-like display that was then sprayed with a transparently applied black dye forhe effect of black ice,” he said. The doors, front apron, and upper portion of the turned legs were veneered in this technique. Other woods used included curly soft maple and red birch for the interior.

James Moore, a student at Northern Vermont University and a resident of Canaan, New York, created the winning entry for the Student Design category and earning a $1,000 prize. His “Curved Cabinet” is a wall hung cabinet inspired by the work of Rchard Scott Newman.

“The goal was to create a clean façade and a hidden tambour door,” said Moore. “I also wanted to showcase the contrast between the black ebony and the quilted maple. I wanted to push myself to create a curved piece as I usually design pieces with straight lines and angles.”

Moore used quilted big leaf maple veneer, gaboon ebony, and figured sugar maple. “Veneer was the only way to ensure the piece could be glued up tightly to allow the door to slide and to precisely place the rays along the top and bottom arcs,” he said. “Without veneer, the movement of the wood would shift the inlay and the alignment of the tambour door track.” 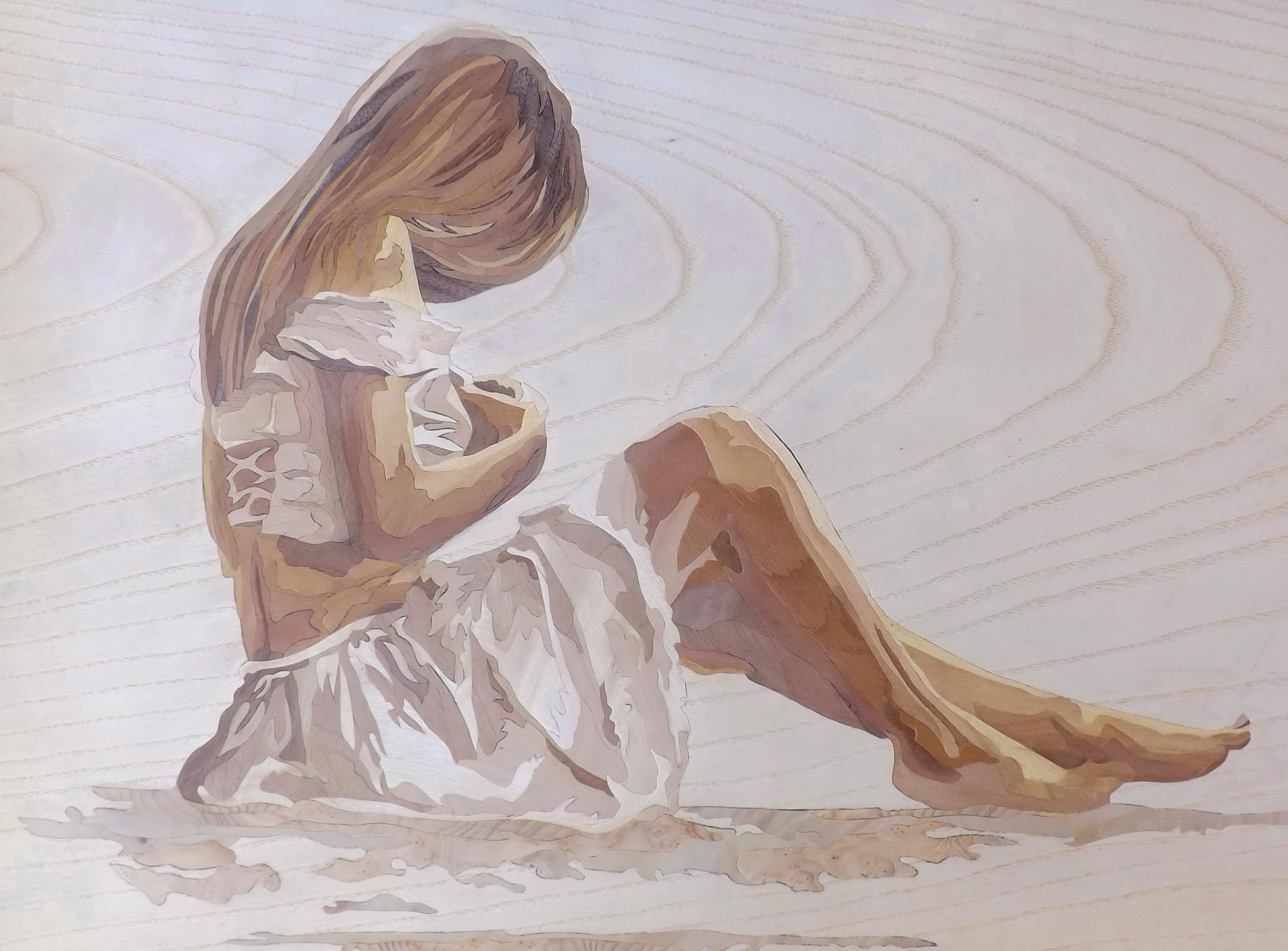 Dusan Rakic, a resident of Serbia, won first place and $1,000 in the Specialty Products category with a veneer painting titled “Helena –Summer Theme – The beauty of youth.” The piece was made with approximately 250 marquetry wood details in veneer from cherry, Indian apple, madrone, maple, spalted maple, maple burl, and walnut.

Paul Schurch, a multi-time winner in the Craftsman’s Challenge, scored again in the Marquetry category with “Waldo’s Coffee,” a marquetry image of coffee beans that also conceals a miniature hidden figure, also done entirely in marquetry.

Paul Schurch of Schurch Woodwork in Santa Barbara, California, is a multi-time winner of the Veneer Tech Craftsman’s Challenge, and he struck again, capturing the Marquetry category with “Waldo’s Coffee,” a wall-hung tableau of coffee beans. The piece is 34 inches tall and 84 inches wide, but it also features a tiny micro-marquetry Waldo character hidden among the coffee beans. 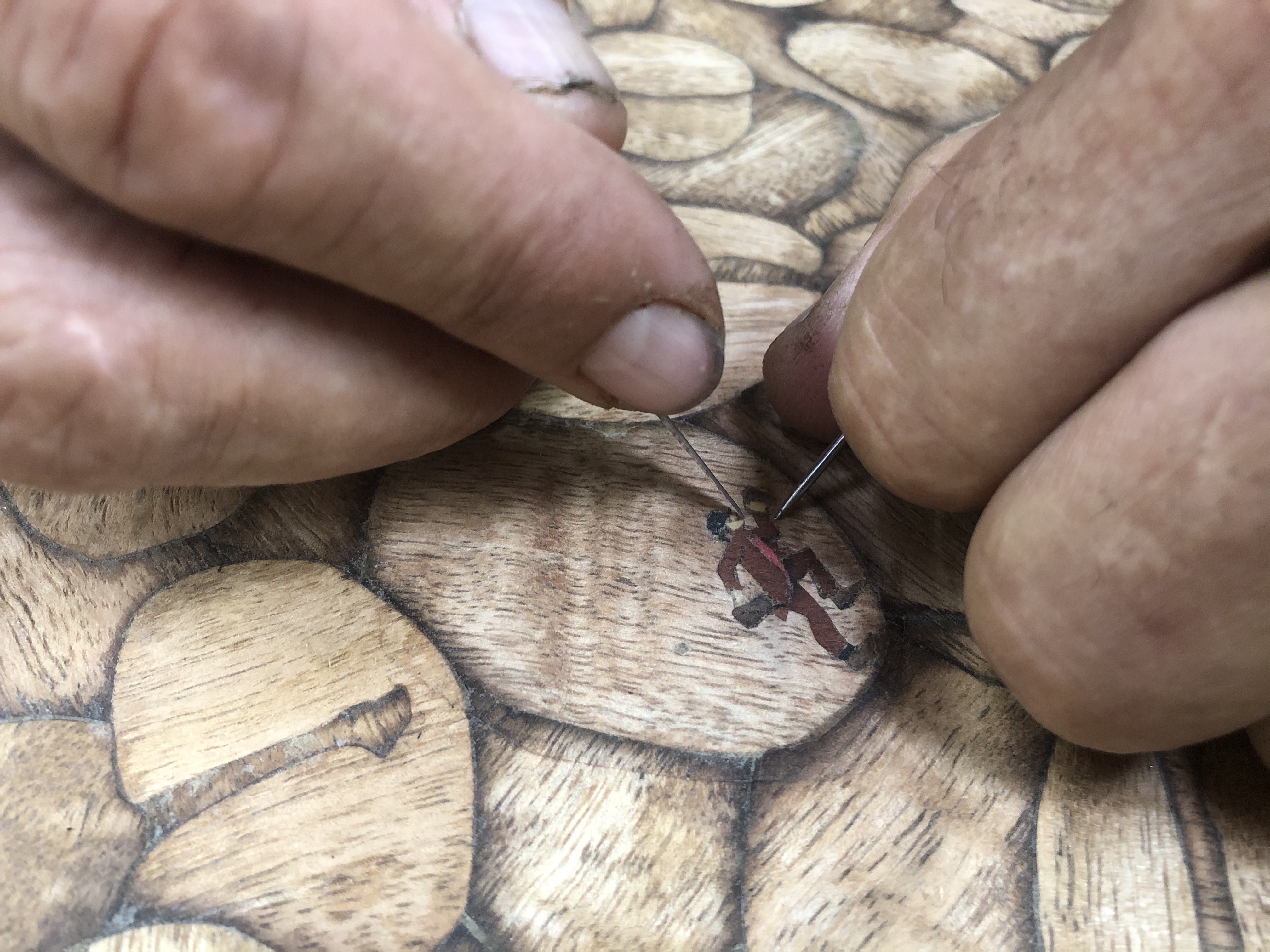 A detail shows how small the hidden marquetry “Waldo” figure is in Paul Schurch’s piece.

The piece features thousands of beans, toasted edges to give depth and uses mango veneer with a koa border.

“Veneer is the only way to do this work,” Schurch said. “I would rather break my head on a plank than try to create this image out of solid wood. It would not last a season of wood movement, and making the pattern milling and fitting the pieces? Impossible.”

Judges for the 2020 contest included past winners Keith Morgan of Bespoke in Larchwood, Iowa, and Scott Grove or Imagine Grove in Rochester, New York. Rounding out the panel of judges was William Sampson, editor of FDMC, who has judged the contest twice before. This year’s judging had to be done remotely because of the coronavirus pandemic, so it presented additional challenges for the judges.

To see learn more about the annual contest and see a slide show of entrees, go to https://www.woodworkingnetwork.com/community/veneer-tech-craftsmans-challenge

Watch the video of the award ceremony below including more pictures of the winners and comments from the judges. 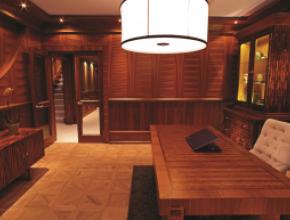 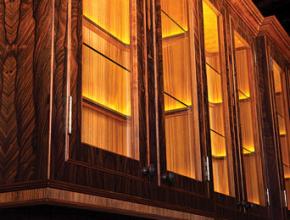