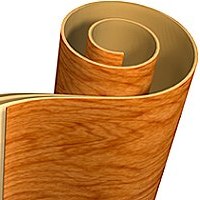 TROY, MI -  When wood veneer distributor Oakwood Veneer started in business 25 years ago, standard industry practice was to use 10 mil paperbacked veneer with contact cement as the glue. As woodworkers complained that the veneer ended up bubbling or cracking long after the initial installation, many decided against using veneer altogether, says Oakwood Veneer CEO Peter Rodgers.

So Oakwood Veneer  began putting the same facings on two 10 mil backed veneer sheets stuck together including two internal layers of glue. The result was 22.2 mil Bubble-Free Veneer that solved the problem of bubbling and cracking when veneer was used with contact cement installations.

“Contact cement is actually the same thing as rubber cement so it never really dries,” says Rodgers. “It’s like a living, breathing product that can change as time goes on. Bubble-Free Veneer was the solution to contact cement movement and it remains a best selling backer for us.” Swings in humidity caused excessive movement in the veneer and contact cement, which caused the bubbling. The extra layer of paper was added for stability, reducing movement, and bubbles and cracks.

Since its arrival, says Rodgers, Bubble-Free Veneer has become the choice for architectural millwork, store fixtures, aircraft interiors, and many other veneer applications in which contact cement is the glue of choice. After the approach caught on, double paperbacked 22 mil veneers were stocked by almost every veneer seller.

Oakwood Veneer, based in Troy, MI, stocks more than 300 wood species in veneer and edgeband. 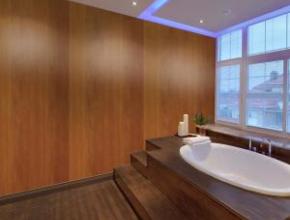