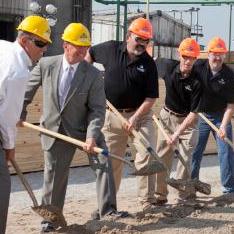 DUDLEY, NC - Georgia-Pacific will add kilns and other infrastructure upgrades at its Dudley, NC, lumber operations in a $9 million launch of a multi-phase increase in the mill's lumber production capacity.

Most of the investment will be used to construct a new continuous dry kiln that will double kiln capacity at the mill and create approximately 20 new jobs, with completion expected by second quarter of 2014. Right now 530 people work at the Dudley sawmill, 100 in lumber and 430 in plywood production.

Further investments could put the spending at 10 times the latest amount. Georgia-Pacific says it is conducting an engineering and infrastructure analysis, and studying permitting, for additional capital investments at Dudley. These could total up to $90 million.

Driven by the steady housing recovery, the Dudley  initiative is part of a $400 million investment plan Georgia-Pacific announced in March that would include building products facilities expansions in Alabama, Arkansas, Georgia, South Carolina and Texas - raising overall lumber and panel production capacity by approximately 20 percent. In July it completed the acquisition of Temple-Inland build products operations for $710 million.

"With the housing market continuing a slow and steady improvement, these planned investments will allow GeorgiaâPacific to provide our current and future customers with the products they need as they begin to ramp up their operations," said Mark Luetters, Georgia-Pacific's executive VP for building products. "We take a long-term approach to our building products business."

In July Seven of GeorgiaâPacific's eight facilities in North Carolina are part of the building products business for $710. Investments since 2006 total $2.2 billion.