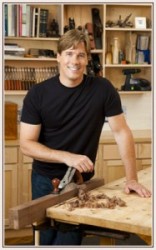 BOSTON, MASS. -- Hot on the heels of a Daytime Emmy Award nomination for its first season, Rough Cut - Woodworking with Tommy Mac returns to public television this fall with thirteen brand-new projects. Premiering nationally on Saturday, October 1, 2011 (check http://www.thomasjmacdonald.com/stationfinder/ or local listings), the series continues to demonstrate how to craft a wide array of furniture, with projects suitable for all skill levels. And, this season, Tommy heads out of the workshop to gain design inspiration in New York and California, as well as around the show's home base in New England.

"I'm excited to kick off season two, which will feature some great new projects that will push the envelope of design," says host Tommy MacDonald. "And, we'll not only bring master craftsmen from around the country into the shop, we'll also get creative inspiration from our Rough Cut Road Trips."

For the show's second season, Tommy shares a variety of projects that offer distinctive styles, both traditional and contemporary. Ranging from a Greene and Greene inspired Dressing Mirror and a Laminated Coat Rack, to a Sand-Shaded Clock and Potting Station, the projects will feature a mix of woodworking techniques and Tommy continues to use both power tools, and his favorite, hand tools. Specific skill sets and procedures featured will include: finger joints, cloud lifts, drawer construction, sand shading, steam-bent lamination, lathing, and carving. Within each half-hour episode, Tommy goes over the process of building the project, while offering special "T-Mac tips" on technique.

To gain design inspiration for the projects, Tommy takes road trips to some fascinating destinations, including: the magnificent Gamble House in Pasadena, CA, where he'll see spectacular examples of Arts and Crafts brilliance of architects Charles and Henry Greene; Brookhaven, NY, where studio artist David Ebner is busy making his famous Scallion Coat Rack using both lamination and lathing techniques; and our very own neck of the woods, Boston, MA, to check out the Museum of Fine Art's new Art of the America's wing.

On November 8, 2011, on the heels of our season two premiere, The Taunton Press will release the highly anticipated companion book to season one of Rough Cut - Woodworking with Tommy Mac ($24.95 paperback), where Tommy MacDonald takes us into his shop as he builds the 12 projects from the first season. In this companion book, Tommy shows readers how to create beautiful pieces of furniture while also teaching key woodworking skills. Projects range from a small wall-hung shelf to a serving tray, blanket chest, and trestle table; and all feature measured drawings, a materials list, and step-by-step photos. Peppered throughout are tips, techniques, and woodworking fundamentals.

"As we enter the second season, we not only have great new episodes and projects to share with viewers, we're also able to make Rough Cut even more accessible with our project plans and DVDs, as well as Taunton's upcoming companion book," says Emmy Award-Nominated WGBH Director/Executive Producer Laurie Donnelly. "We're pleased that the series can now provide such comprehensive educational resources for woodworkers and enthusiasts alike."