Brooklyn, N.Y. – “Lend me a hand” has taken on a totally new meaning, thanks to the inspirational project called Robohand. Robohand is a story of collaboration from 10,000 miles apart between Richard Van As, a woodworker from Johannesburg, South Africa, and Ivan Owen, a theatrical prop designer from Seattle, Washington, and made possible via MakerBot’s sharing website Thingiverse.com and 3D printing on a MakerBot® Replicator® 2 Desktop 3D Printer. 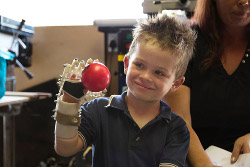 Robohand is a mechanical 3D printed hand that you can make on a MakerBot Replicator 2 Desktop 3D Printer. The idea was originally conceived by Richard Van As to replace four severed fingers that he lost in a woodworking accident in 2011. Van As struggled with finding a cost-­âeffective means of creating substitute fingers for those that were gone. He frustratingly discovered that prosthetic fingers, made specifically for him, could cost upward of $10,000 per finger. When Van As found Ivan Owen, a Seattle-­â based theatrical prop designer who specialized in hands, the two collaborated to create a design for working fingers that could be inexpensively built. After trying numerous types of materials, the pair hit upon the idea of using a 3D printer.

“The process of designing and crafting fingers for Rich was taking weeks and months per cycle,” noted Bre Pettis, CEO of MakerBot. “For us here at MakerBot, that was too much wasted time. We knew our 3D printer, the MakerBot Replicator 2 Desktop 3D Printer, could take this important work to new heights. We saw their collaboration and the work they were doing as ground-­âbreaking, and we asked them to accept a donation from us: one MakerBot Replicator 2 Desktop 3D Printer for each of them – one in Washington state, and the other in South Africa.”

“The donation of the MakerBot Replicator 2 Desktop 3D Printers transformed our process,” noted Richard Van As. “It turns out the MakerBots were incredibly useful. Just hours after receiving our MakerBots from Brooklyn, N.Y., we were sharing files back and forth, testing the design on one side of the world, and doing another iteration on the other side. Each of us having a MakerBot Replicator 2 Desktop 3D Printer took the prototyping process down from weeks to just 20 minutes.”

“The impact that utilizing the MakerBot Replicator 2 Desktop 3D Printer had was incredible,” said Ivan Owen. “It dramatically increased the speed at which we could prototype and try out ideas. It gave us the ability to both hold physical copies of the exact same thing, even though we were separated by 10,000 miles.”

And that’s only half the story…

With Robohand, Richard began to realize how quickly he could refine the design for other people that have lost their fingers, or who were born without fingers. After posting his own story, he received emails and Facebook messages from parents whose children were perfect candidates for a Robohand of their own. One of these children was five-­âyear-­âold Liam.

Liam suffers from a birth defect called Amniotic Band Syndrome. Amniotic Band Syndrome is poorly understood, but the effects of it are pretty clear. Children are often born without extremities, especially fingers and toes, when fibrous bands in the womb prevent these parts from developing normally. It’s this condition that caused Liam to be born with no fingers on his right hand. The cost of purchasing a traditional prosthesis was far too much for the family, especially since Liam is a fast-­âgrowing little boy who would outgrow prosthesis in a few months.

Liam was given a Robohand in January 2013; just days after Richard and Ivan received their MakerBots. He has grown so much in the past several months that he has already been fitted for his second Robohand. The word spread, and other children with ABS in the Johannesburg area like Liam, wanted their own Robohands, sized just for them. The files, including the assembly instructions, have been posted online on Thingiverse, and people around the globe have downloaded the design more than 3,500 times in just three short months.

It is the Robohand Project’s hope that by posting the Robohand plans on Thingiverse, it will empower others around the world to download the design and 3D print Robohands for those who need it.

What Is A Robohand?

A Robohand is a set of fingers that open and close to grasp things based on the motion of the wrist. When the wrist folds and contracts, the cables attaching the fingers to the base structure cause the fingers to curl. Nearly all the parts of a Robohand are made on MakerBot Replicator 2 Desktop 3D printers.

Ivan, who played a big part in the initial design stages of Robohand, says he studied the anatomy of crab legs and human fingers to get the basic muscle and tendon structure. The result is a simple assembly that Richard believes anyone can make themselves. While a full set of prosthetic fingers may cost thousands of dollars, all of the Robohand parts that are made on the MakerBot Replicator 2 Desktop 3D Printer add up to roughly several dollars ($2.50 USD) in material costs and the total cost is around $150 USD.

Finger amputations are the most common amputation in the United States, accounting for more than 90 percent of all amputations. Amniotic Band Syndrome (ABS) affects 1 in 1,200 live births, and of those, about 80 percent of ABS cases involve the loss or malformation of fingers and hands. For these people, Robohand is a great alternative to traditional routes of treatment.

While Robohand has been gaining in popularity these last couple months, there is still a lot to be done. Richard Van As has given hands-­âon help to a few of the people within his reach, but Robohand was made to be shared. For a full set of parts, 3D printed designs, and assembly instructions, see Robohand on Thingiverse. To support the Robohand project, see www.indiegogo.com/robohand and support this worthy cause.

For this moving story on how one hand has helped another, view the Robohand story at youtu.be/WT3772yhr0o.

Founded in 2009, Brooklyn-­âbased MakerBot has grown to be a global leader in desktop 3D printing. There are more than 15,000 MakerBot Desktop 3D Printers in use by engineers, designers, researchers, and people who just like to make things. The MakerBot Replicator Desktop 3D Printer has been named Popular Mechanics “Overall Winner” for best 3D printer and has numerous awards, including being honored as one of Time Magazine’s Best Inventions of 2012; “Best Emerging Tech” at the 2012 Consumer Electronics Show; won Popular Mechanics Editor’s Choice Award; the Popular Science Product of the Year; and recently was awarded a TechCrunch Crunchies Award for best hardware start-­â up; a Gold Edison Award for Best Design; and a Fast Company 2012 Innovation by Design Award, as well as being named by Fast Company as “One of the World’s Top 10 Most Innovative Companies in Consumer Electronics.” The company has been featured on the cover of WIRED, The New York Times, The Wall Street Journal, the Economist, Inc., Worth, The Colbert Report, Fast Company, Engadget, Make: Magazine, Rolling Stone, Time.com, IEEE Spectrum, CNN, Financial Times, NPR, Vogue Italia and many others. Follow MakerBot @MakerBot.