MORGANTOWN, WV - Many years ago, low wages in other countries led many furniture manufacturers to move their factories overseas. With this move, many companies compromised the quality of their product as well. This has been the only situation that many consumers have dealt with and they've become accustomed to fewer options. 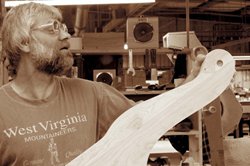 With the resurgence of American manufacturing coupled with more demand by consumers for locally sourced products of higher quality, there are more options on the market. Chuck's Furniture of Morgantown West Virginia has always tried to place more of a focus on American made products. Now, they've taken it a step further and offer West Virginia made products.

Their first shipment from Gat Creek arrived this past week and it has been received very well. James Prutilpac, Chuck's Furniture's sales manager says, "customers love the quality and style but the fact that it is made right here is definitely a big draw."

According to James, "Gat Creek has a fantastic story. The company evolved from an antique reproduction business to a full fledged furniture manufacturer named Tom Seely. After going through some difficulties, the business changed hands and became Gat Creek, named after Gat Caperton, the owner and CEO. He has a lot of passion for his product, the people working with him, and the industry. In just a few minutes speaking with him, you can tell he wants to put out a great product, support that great craftsmen he has, and be a positive influence on the state."

Gat Creek makes only solid wood furniture with heirloom quality construction. All pieces are available in solid cherry or maple with a variety of finishes and paints. Stop into Chuck's Furniture to see it in person.