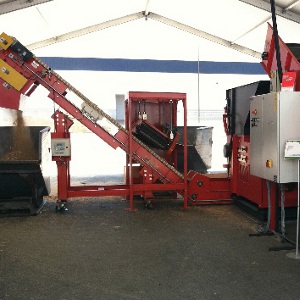 WEIMA America is excited to return as the Official Recycling Partner of the 2015 AWFS Fair. The Destroy Responsibly!™ campaign has been an important part of this show’s efforts to create a greener footprint, not only at the show but within the Las Vegas community.

WEIMA America will supply a WLK13 shredder system, complete with infeed and discharge conveyors. Freeman contractors will be on the show floor collecting wood waste that is produced during exhibitor demonstrations. That wood waste will be transported to the shredder system, which will be located behind the exhibit hall, and processed immediately. Show attendees are welcome to make their way out back to watch the shredding system in action. Just follow the green carpet!

With the help of an organization called Repurpose America, the shredded material will be diverted from a landfill and will instead be donated to a Las Vegas community location. In years past, the material has been donated to area parks and nature preserves.

WEIMA has been proud to play an important role in reducing the environmental footprint of companies worldwide. The Destroy Responsibly!™ program has become the pride and joy of the AWFS Fair over the years, and WEIMA is honored to partner with the show once again in 2015.

The AWFS Fair will be held July 22-25, 2015 at the Las Vegas Convention Center in Las Vegas, Nevada. WEIMA America will be exhibiting at booth #9211.