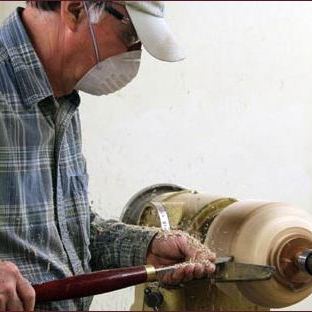 REIDSVILLE, NC -  Rockingham Community College has opened the Center for Creative Woodworking, offering dedicated areas for woodturning and woodworking. The college says the new education center is the first of its kind in its area of North Carolina.

“There’s a rich history of woodworking in this area,” says Dr. Michael Helmick, RCC president, “so there is an interest and need for this type of facility." The Center was established in partnership with the City of Reidsville, with a vacant building made available to the college, which renovated it for the woodowrking center. The announcement represents a turnaround for the Rockingham; it closed the woodworking program in 2009 for lack of interest.

Located in the city center rather than on campus,  “Individuals walking in the downtown will be able to look through the front windows and watch students turning wood,” says Helmick. The Center is expected to 15 lathes for woodturning, plus woodworking equipment. Classes in both areas will run simultaneously.

Helmick says the Center for Creative Woodworking plans to offer classes from renowned woodworkers who can train individuals in the craft, "which can provide them with extra income or possibly a new career.”

Classes will on building cabinets and hand-cut joinery, as well as hobby areas such as making pens and goblets, are included. Some classes began this month; others launch in February, when an open house is planned. Open shop memberships for area woodworkers will be made available so they can use the Center’s equipment, Helmick says. For more information: 336-342-4261, ext. 2140 or 2588.