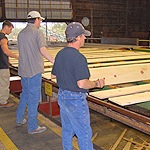 George Emmerson, Sierra Pacific President, says the acquisition will add to the lumber and millwork firm's manufacturing capacity. It will also expand its product lines and provide entree to Central and Eastern U.S. and international markets for its own Window Division "as we move beyond our current footprint in the western U.S.," says Emmerson. "The addition of the skilled Hurd workforce combined with our lumber and millwork manufacturing capabilities will provide a strong base for our anticipated growth," he said. With factories in Medford and Merrill, WI, Hurd products are manufactured in 600,000 square feet of production space, and sold by 400 distributors in the United States and Canada, and in 20 countries worldwide.

"Sierra Pacific is a family-owned business whose core beliefs perfectly complement our own," said , and one that is financially-solid with outstanding long term potential."

Sierra Pacific plans to make additional capital investments in Hurd, whose assets were acquired by Longroad in 2008.

"By joining together these two well-respected window brands, we are creating the most vertically-integrated wood window company in the industry today," says Hurd President Dominic Truniger.