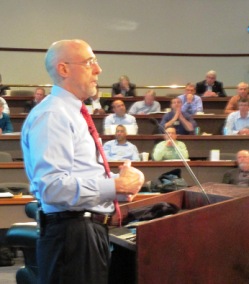 ST. CHARLES, IL - Reinventing corporate culture at wood manufacturing operations was at the top of the agenda today, as woodworking industry execs meet at the Stiles Executive Briefing Conference near Chicago.

Attendees come from businesses ranging in size from Will Fuller's lean and rapidly growing under-20 employee Acacia in Porter, TX; to big furniture and cabinetry businesses like Haworth, Steelcase, American Woodmark and Sauder. Well represented are 100-plus employee businesses such as architectural millwork firms like Houston-based Brochsteins - CFO Steven Hecht is at EBC - and panel products firm Premier Eurocase (president Andy Wilzoch is at EBC). 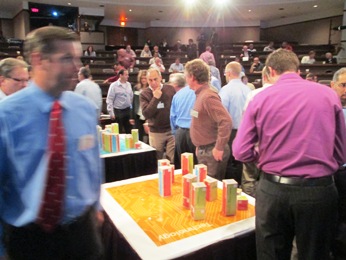 EBC addresses the connection between woodworking business practices and technology, and today's sessions included a morning encounter with Robert Tucker, a management change specialist. Tucker, who also spoke at a Sunday night banquet, went into deeper detail on the five steps to transforming a business.

Following Tucker was Nate Young, with the team from NewNorth Center, a group specializing in guiding companies through cultural and organizational transformation. The audience was invited to list its top four concerns in business operations on stand-up markers - a stack of wood blocks - and place them on tables representing these areas. Significantly, personnel matters - finding, hiring, inspiring, and retaining -  ranked as a top issue for most wood production firms present, above technology, processes, and materials (quality, availability, pricing) which ranked fourth of the top four areas of concern for managers.

A panel presentation on cultivating apprenctices at Blum (the hardware company has won awards for its program) was followed by Harry Moser, founder and president of the Reshoring Initiative. Moser said 100,000 jobs had been returned from abroad by U.S. manufacturers in recent years, including hundreds at a dozen wood products firms who grew manufacturing in the U.S. Moser projected that by 2015, increases in salaries in China will tip the competitive edge to U.S. or North American production in a number of industries, notably furniture production.

Moser explained that buyers have not accounted for costs associated with delays, production errors, transport, and other expenses when making buying decisions. The Reshoring Initiative provides a free calculator to help U.S. producers demonstrate to customers the hidden costs attached to importing from China or other regions.