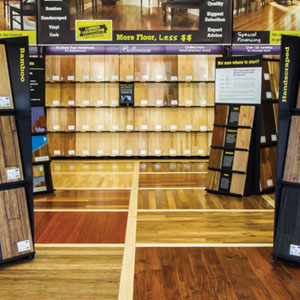 A statement by CNFPIA said the group has formed a joint team of Chinese and U.S. advisers "to address the Lumber Liquidators issues specifically, and formaldehyde issues more generally, by first gathering all relevant facts. When we have developed those facts we plan to provide further information."

CNFPIA said a review of the procedures and standards currently used by Lumber Liquidators' inspectors, as well as those of other companies, will also take place. "Americans can be sure that CNFPIA takes the environmental concerns of U.S. consumers seriously and will work to ensure that all relevant laws and regulations are complied with," the CNFPIA said.

Also on March 25, the CPSC announced it is "actively investigating laminate flooring products from Lumber Liquidators." CPSC Chairman Elliot Kaye noted Lumber Liquidators "has been cooperative to date in our investigation and has pledged to fully cooperate throughout."

The investigation, Kaye said, will include testing of samples and consideration of home-based exposure scenarios for risks."The science is well developed, but not fully developed on the risks associated with formaldehyde exposure, especially long term. On the long term exposure in particular, we will need to rely on the expertise of our federal partners with jurisdiction and expertise in that area. We are already coordinating closely with our federal partners so consumers can have answers as quickly as possible.”

A statement from Lumber Liquidators said the flooring manufacturer is "fully cooperating" and has already provided testing and safety information.

"We have been in direct communication with CPSC staff over the past several weeks and expect them to review our products using sound science and test methods that evaluate finished flooring as used in consumers' homes. It is our firm belief that finished product testing, rather than deconstruction, is the best approach to determine consumer safety. We look forward to working with the CPSC on this matter,” the company said.

U.S. Sen. Bill Nelson (D-FL) asked on March 4 for the CPSC, The Centers for Disease Control and Prevention and The Federal Trade Commission to launch independent investigations of Lumber Liquidators following a "60 Minutes" report that some of the company's imported laminate flooring had dangerously high levels of formaldehyde emissions.