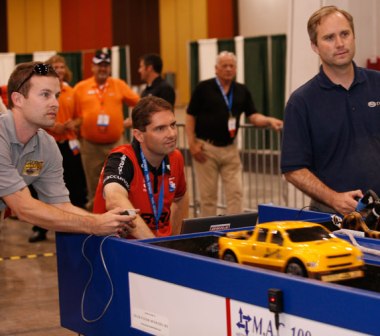 SANTA FE SPRINGS, CA – The 2013 running of the Indy 500 is still some several weeks out, but woodworkers with a sense of humor and a need for (relative) speed already are fastening their belt sanders in preparation for their national race championship in late July. Competition will be fierce in steamy Las Vegas as speed-obsessed competitors race stock and modified belt sanders down a 75-foot wooden track, with the fastest and best-dressed sanders taking home trophies and special awards presented by Accuride.

“We’re seeing these sanders get faster and faster, with the track record being squashed on a regular basis,” says Jamie Goodwin, Accuride rep and Belt Sander Racing Association president. “Last year alone the speed record was broken three times—twice by Bob Kinsella of Kinsella Woodworks—with a blazing 2.42 seconds claimed by his sander ‘Quatro’.”

The Belt Sander Championship Races are a highlight of the biennial AWFS Fair, with more than 1,000 people packing the grandstands to see the grit — and sometimes sanders — fly.