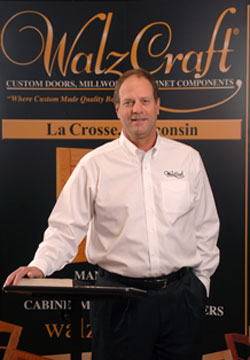 That interest carried through his school years, including 4-H, “where I did woodworking projects to show at the county fair,” and into technical college, where Walz learned cabinetmaking as part of his goal in building custom homes.

It was while working for a home builder that a new door opened. “In 1982 I was asked by an associate if I was interested in becoming a small percentage partner in a business with four employees that manufactured custom kitchen cabinet doors for cabinet refacers. I reflected back to my technical college education and said, ‘I believe I can do that.’”

Walz says his first plan of action was to refine the manufacturing processes “one step at a time, first purchasing machinery that met our needs for the times and gradually upgrading to more advanced machines as needed.” He also became involved in selling the wood components to custom cabinet shops in Wisconsin, Minnesota and Iowa.

The mantra, “If we listen to our customers, they will take us where we need to go,” quickly proved true for Walz and the company. And in 1987 he bought out his original partner and became the majority owner.

From the beginning, Walz says, one of the smartest things he has done has been to invest in good employees. “I started trying to hire people who I believed were smarter than myself in the areas that I admitted I had very few skills in.”

WalzCraft continues to position itself for even greater success, with Walz’s son Bradley transitioning to a more prominent leadership role within the firm.

“As a company, our goals are to continue to build upon the solid foundation that WalzCraft is already known for – ‘Quality Products’ built by ‘Quality People.’”

Walz adds, “I have been so blessed to have been able to build a team of such quality orientated team-members: from the people out in the field making sales calls, to all of people who process the orders from the time they come through the door all the way through to our shipping docks. The La Crosse area has an abundance of ‘quality oriented people.’” Walz also credits his family for helping him become a Market Leader in the industry. “We all know that success in business doesn’t just happen. In my case this award needs to first and foremost be shared with my wife Jane Lynn, my son Bradley, his wife Britni and my two stepsons, Jess and Ross, who all know what a long day is like around the Walz family household.”

Away from work, Walz adds, he likes to spend time with his grandson, pheasant hunting with his dogs, go for a Harley ride and dine out with his wife.

• Number of years in the industry: 31

• Word or phrase that describes you? Driven

• Who have you tried to emulate in business and why? "My coaches have been key in teaching the importance of everyone 'Pulling the same end of the rope!' In business we have to work together as a team, pulling for the same end."