Wharton Esherick’s “Thunder Table” was built for the Hedgerow Theatre in 1929. It is the centerpiece of an auction of Esherick’s work at Freeman’s in Philadelphia to benefit the theater.

PHILADELPHIA, PA – Rare furniture crafted by legendary woodworker Wharton Esherick for the historic Hedgerow Theatre will be put up for auction for the first time on March 31 in Philadelphia at Freeman’s. Representing decades of creative exchange between Esherick and the Hedgerow Theatre, the pieces to be auctioned include eight of Esherick’s earliest “Hammer-Handle” chairs and the important “Thunder Table” from 1929.

Proceeds from the sale will benefit future preservation of Hedgerow Theatre, which was established in 1923 and is America’s longest serving ensemble repertory theater.

Esherick’s carved logo with the “Hedgerow” marking included can be seen on the “Thunder Table” stretcher. Esherick also carved a stylistic illustration of actors in a corner of the table top.

Wharton Esherick (1887-1970), was among the vanguard of the Studio Furniture Movement. He began working in wood at the close of the Arts & Crafts Movement. Although embracing the ideology that valued the hand-made over the industrially produced, he broke with the movement’s more traditional aesthetic, creating sculptural and cutting-edge forms. Esherick was introduced to the Hedgerow Theatre in nearby Rose Valley, Pennsylvania, and to its founding Artistic Director Jasper Deeter (1893-1972) in 1923.

Esherick began designing pieces for the Hedgerow Theatre in exchange for his daughter’s acting lessons. Initially involved in set, costume and lighting design, Esherick went on to create woodblock posters for various productions and furniture for both the theater and nearby Hedgerow House, which served as the home to theater company members. Over the years, the Hedgerow Theatre’s Green Room housed many temporary and permanent works by Esherick, operating as an unofficial gallery and exhibition space for the artist. 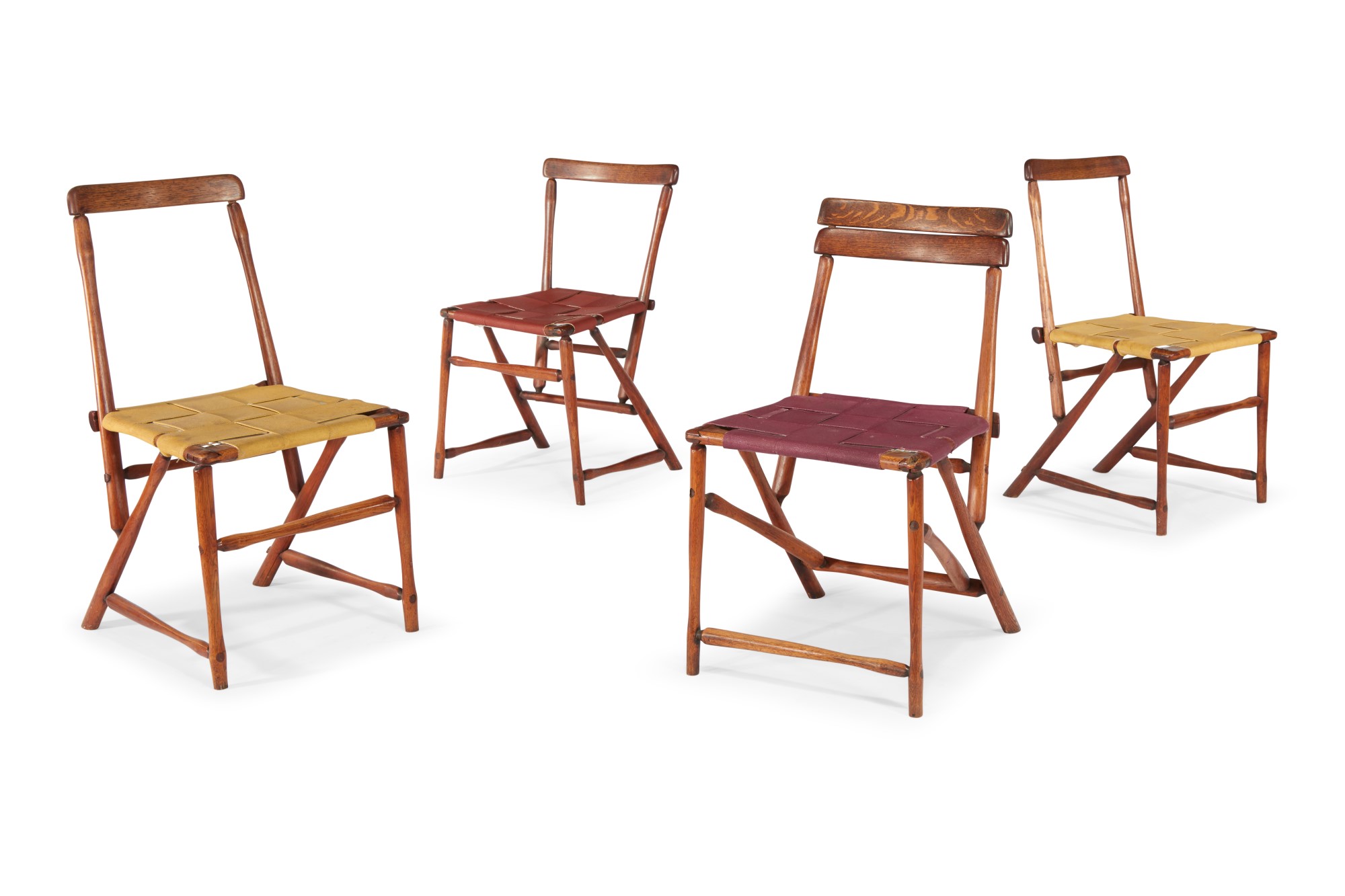 Made with hammer handles Esherick collected, eight examples of his famous “Hammer Handle Chairs” are included in the auction.

Leading the auction is the iconic “Thunder Table” carved by Esherick in 1929 in celebration of the success of the Theatre’s production of Thunder on the Left in which his daughter Mary appeared. The table stands on two splayed and hinged legs; its top is composed of two long, found wooden boards, each with a perceptibly warped end. Having spent much of his time on the Theatre’s balcony sketching the various dancers and actors on stage, Esherick carved a minimalist curvilinear drawing of the play’s leading actors into one of the table’s ends.

Also in the auction is the set of stairs Esherick built in the Theatre’s former lobby in the mid-1930s to create more room for the box office. As a replacement for the old set of Arts & Crafts stairs, he designed and built one of his signature idiosyncratic staircases, with gently curving steps fanning out from a two-foot central column. Because of their nontraditional design, Esherick’s stairs failed to pass fire-code inspection and were deemed unusable for ushering theatergoers from the lobby to the balcony. 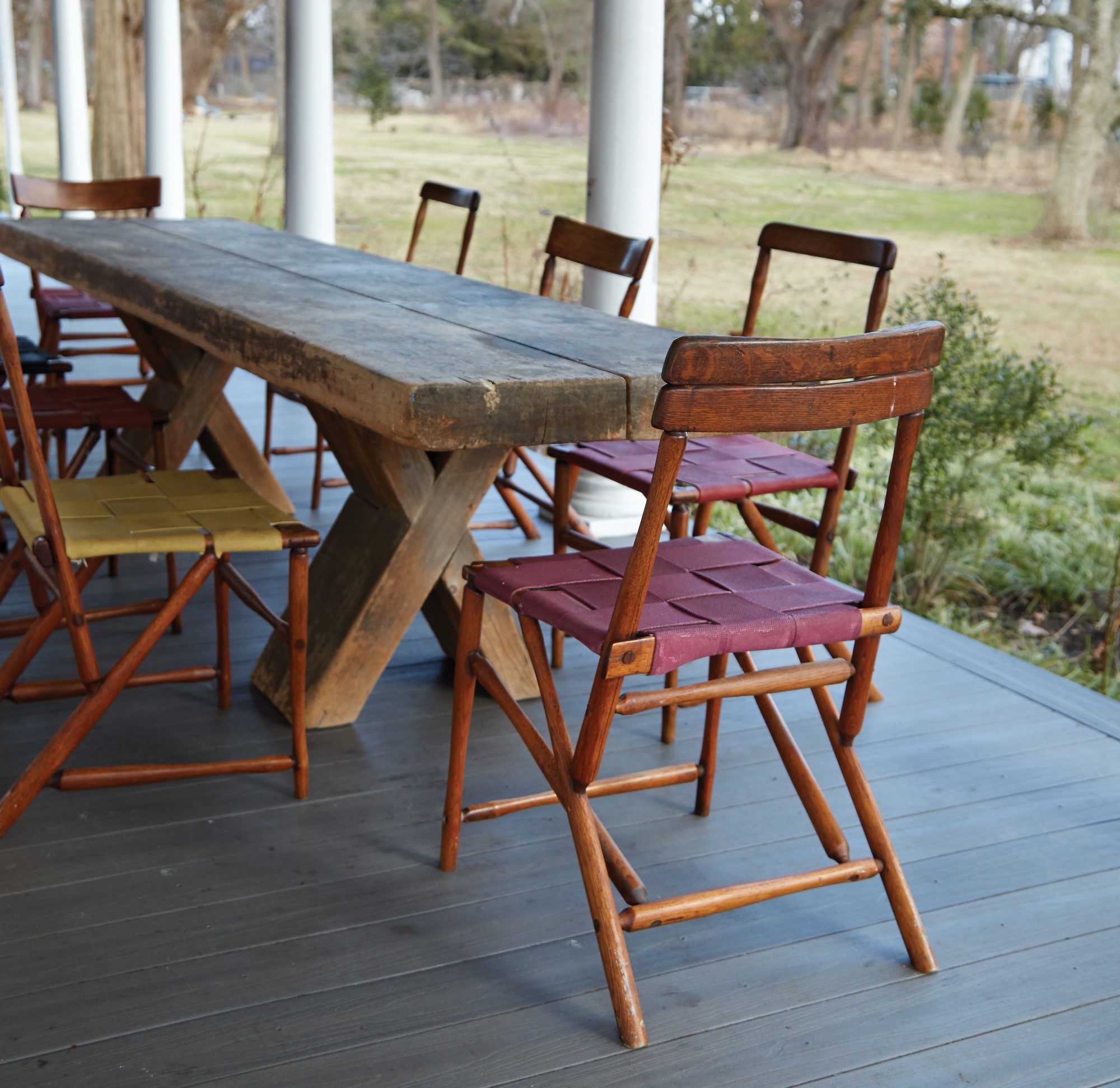 Pieces built by Esherick for the Hedgerow Theatre, such as this table and chairs, were regularly used as daily furniture by the ensemble actors who lived and worked at the theater facility. Esherick built some of the furniture in return for acting lessons for his daughter.

Additional pieces to be auctioned include a Sawbuck Table used at Hedgerow House; a Trestle Table that purportedly came from Esherick’s own collection; and eight “Hammer-Handle” chairs. The chairs, assembled in part from found axe and hammer handles by Esherick, are among the most iconic and significant of his creations. Examples are presently in the collections of the Museum of Fine Arts, Houston; the Wharton Esherick Museum in Chester County, Pennsylvania; The Museum of Art & Design in New York, New York; and the Longhouse Reserve in Long Island, New York, among others.

The “Thunder Table” is presently on view in Freeman’s new flagship gallery at 2400 Market Street in Philadelphia. Additional highlights from the Hedgerow Theatre Collection are on view in Freeman’s Main Line Gallery in Wayne, Pennsylvania. The full exhibition for the March 31 Design Auction will be open to the public March 27-30 at 2400 Market Street. The staircase will remain at Hedgerow Theatre prior to the auction.