Steve Ehle, shown here in 2009, was the longtime editor of Wood Digest magazine and a booster of the woodworking industry for decades.

Steve Ehle, the longtime editor of Wood Digest and indefatigable booster of the woodworking industry has died one day short of his 70th birthday. His career spanned decades in newspaper and magazine journalism, but it also included a stint as a semi-pro baseball player and a legacy of spreading good humor.

Stephen Patterson Ehle was born January 16, 1949, in Stoughton, Wisconsin, the third child of Claire Olin and Rose Patterson Ehle. He died January 15, 2019, in Fitchburg, Wisconsin after a battle with pneumonia.

Ehle grew up in Evansville, Wisconsin, and showed early promise as an athlete in high school, lettering in baseball, but also playing basketball and competing in track and field. He played baseball for the University of Wisconsin-Madison during his freshman year and later played semi-pro baseball for 11 years. He pitched a no-hitter in the 1970s and was the only player to be elected to the Home Talent All-Star Team five times.

After graduating from UW-Madison with a degree in radio/TV journalism, Ehle launched a career reporting, editing, and taking photographs for a series of publications, including National Farmer’s Organization’s Guidelight. He was sports editor at the Evansville Post and a correspondent for Madison’s Capital Times. While he was editor of the Courier Hub in Stoughton, Wisconsin, that newspaper garnered 26 awards from the Wisconsin Newspaper Association.

Tim Fixmer, who is the CEO of CCI Media, which owns FDMC magazine and Woodworking Network, brought Ehle into the woodworking trade press, tapping him as editor of Wood Digest in 1986. “He came to us from a small, weekly paper and jumped right in to quickly learn the industry. And once he had the reins in his grip, it didn’t take him long to establish a strong following,” said Fixmer, who worked with Steve for more than 20 years during his tenure at Johnson Hill Press, Cygnus Business Media, and CCI Media. “Widely known for his quick wit and irreverent sense of humor, Steve was an outstanding writer who cared deeply for the woodworking industry.”

After Ehle left Wood Digest in 2009, he did a number of freelance projects including writing for FDMC. For several years he played a key role in the annual Benchmark Survey compiled by the Cabinet Makers Association.

Ehle was also actively involved in promoting the woodworking industry. He regularly participated in the Wood Machinery Manufacturers of America fly-in events in Washington, D.C., to help educate Congressional leaders about the concerns of the industry. He was also concerned about training and education opportunities for the industry and became the Wisconsin coordinator for the WoodLINKS USA program. He also worked to boost the Woodworking Career Alliance.

“I met Steve Ehle at the WoodLINKS USA teacher conference during the 2000 IWF,” remembers Mark Smith, currently a teacher at Reed-Custer High School, Braidwood, Illinois. “At the time, I did not know the impact Steve would have on me and my teaching career. Steve had a positive influence on my program and students at Shiloh High School where I taught at the time. When I was the National Director of WoodLINKS USA, Steve and I worked together. He had a great sense of humor and was a wonderful mentor. He will be sorely missed.” 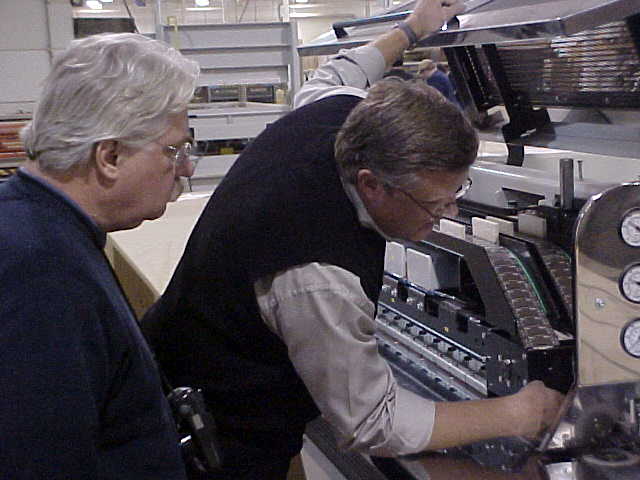 Another past director of WoodLINKS USA, Wilfred Torunski, has this remembrance of Ehle: “Our industry lost a ‘character.’ A very worthy firm believer of the WoodLINKS concept and program. Steve understood the complexity of the program and became a passionate supporter who became very active from the start. I remember Steve most because of his caustic comments - always right on – that never made the press. He kept us in stitches. He was very popular with everyone. Donna and I visited Steve and Jennifer at their home in Cooksville, Wisconsin. I will never forget the pride he had in his tomato garden and all the plans he had to make his yearly preserves. This visit led me to grow over 100 tomato plants a year, I just had to do what the herring lover Norwegian did. Sorry to see you go ‘ol friend.’”

Steve’s activities were not confined to woodworking and sports. He was an avid photographer and very interested in local history. He and his wife, Jennifer, lovingly restored the historic John Cook House in Cooksville, Wisconsin, which they purchased in 1981. At the time, the home was considered the oldest residence in Rock County that was built as a residence and still used as such. Ehle was also involved with the Historic Cooksville Trust.