WASHINGTON, D.C. - IKEA announced a recall of 29 million Malm and other dressers and chests after a third tip-over incident. In the  latest, which took place in February 2016, a 22-month-old child was entrapped and died.
The accident pushed the Consumer Products Safety Commission to order IKEA to move beyond a repair kit remediation program launched in 2015. That program provided a retrofit wall anchoring kit.Now CPSC and IKEA have jointly urged customers either to anchor chests to the wall, or return dressers for a refund.

In the recall notice IKEA says the chests and dressers are unstable if they are not properly anchored to the wall, posing a serious tip-over and entrapment hazard that can result in death or injuries to children.

Philadelphia personal injury firm Feldman Shepherd says IKEA was pushed to recall dressers by lawsuits it filed on behalf of the toddlers' families, suits that allege that IKEA designed and sold dangerous and defective dressers, including the MALM dresser line, which do not meet the furniture industry's minimum safety standard for stability. The firm handled cases for three families whose children died in accidents with furniture.

Families of toddlers who died in tip-over accidents were represented by lawfirm Feldman Shepherd.
Consumers are advised to " immediately stop using any recalled chest and dresser that is not properly anchored to the wall and place it into an area that children cannot access," and are offered a full refund for chests and dressers manufactured between January 2002 and June 2016. Consumers with chests and dressers manufactured prior to January 2002 are eligible for a partial store credit.
Consumers can order a free wall-anchoring repair kit. Consumers can install the kit themselves or IKEA will provide a one-time, free in-home installation service, upon request. Consumers can reorder the kits throughout the life of their chest and dresser. 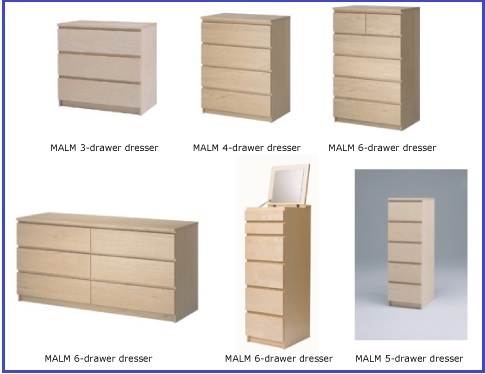