What are the market conditions for woodworkers involved in the construction-based sectors and what are some of the investments being planned by companies to improve their capabilities?

Against this backdrop, the eleventh annual housing market study was conducted in early 2020 to assess market conditions for secondary woodworking manufacturers involved in construction-based and other related sectors. The studies are a joint effort by Virginia Tech, the U.S. Forest Service, and Woodworking Network/FDMC (see “About the Survey” for details). Unique to this year’s study was the emergence of market disruptions associated with the coronavirus pandemic as data collection was occurring.

Sales & market trends
Analysis of year-over-year sales performance has revealed a somewhat stable environment for secondary manufacturers in recent years, but a decline was evident in this year’s study. Nearly 27% of responding companies reported a decline in sales volume for 2019; by comparison, sales declines were reported by 21% and 19% of responding companies for 2018 and 2017. The percentages of respondents in the Slightly Worse (sales off by 5%) and Slightly Better (sales up by 5%) categories both increased, while the Somewhat Better (sales up by 10%) and Much Better (sales up by 20% or more) categories both realized declines from positive trends in recent years (Figure 1). 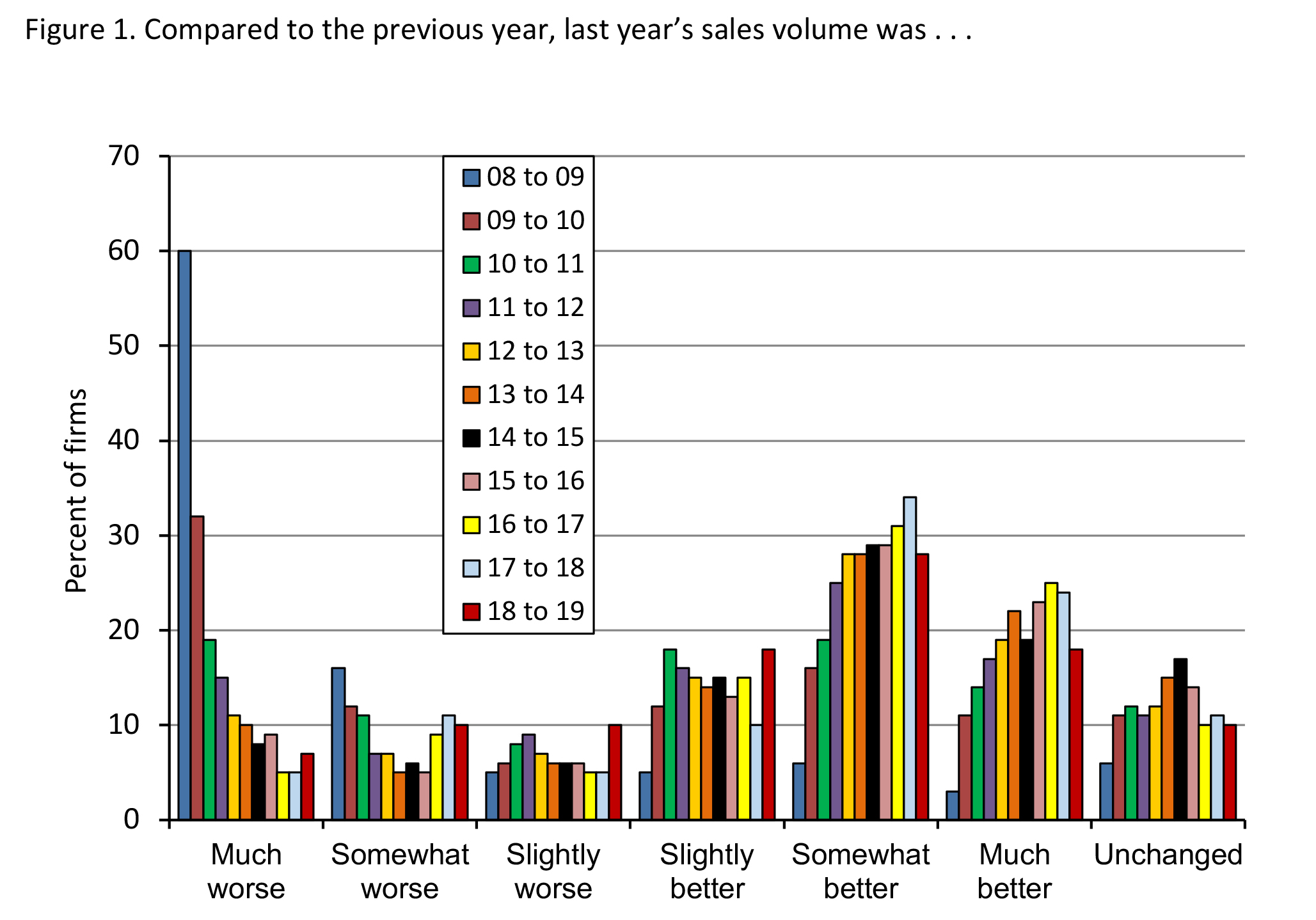 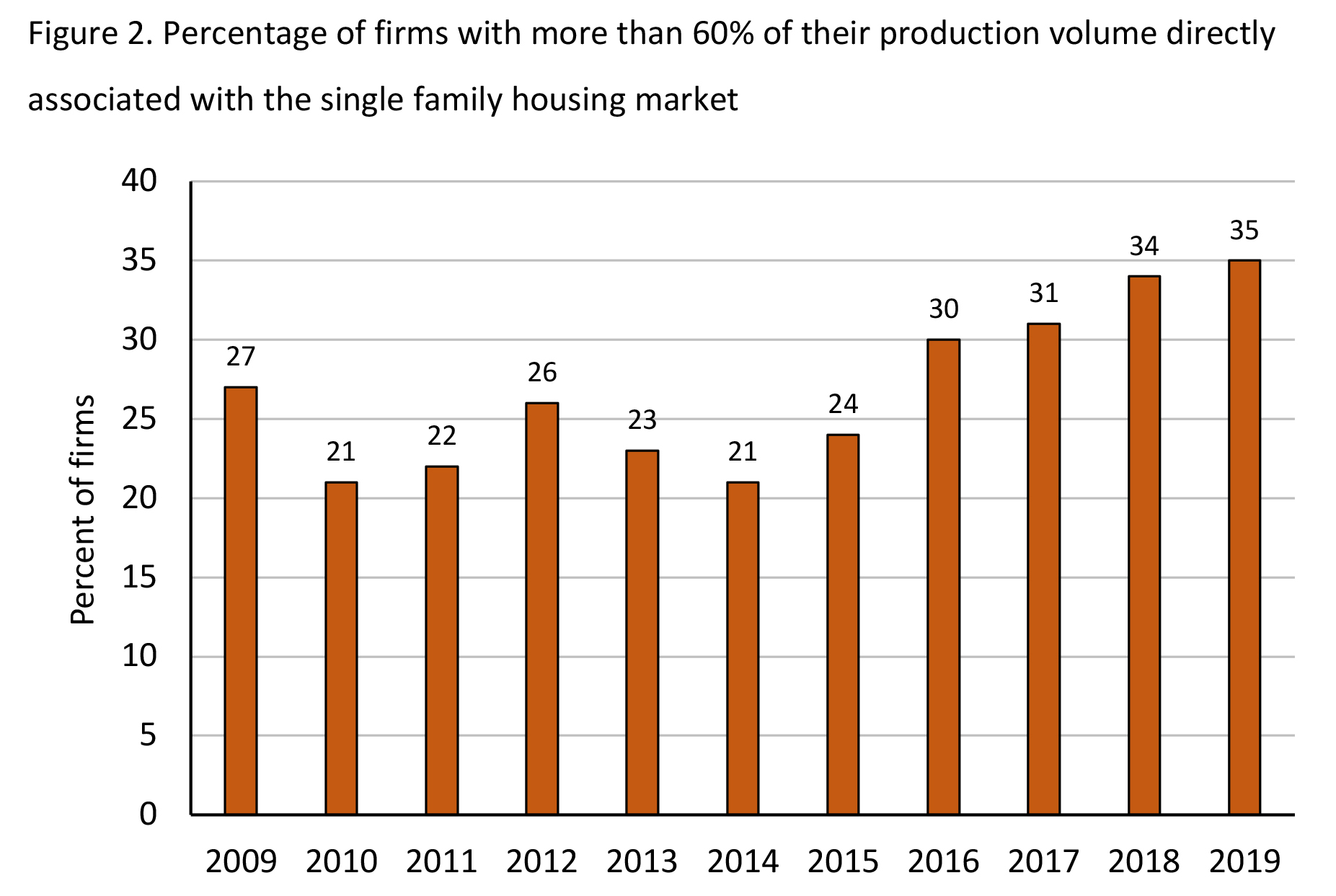 Product demand & price points
Although green building products is a market possibility for secondary woodworkers looking to leverage sales volume, customer interest continues to decline. This year was no exception, with just 22% of firms reporting they had seen an increase, (the lowest percentage to date), while 20% of respondents uncertain.

Lastly, respondents to this year’s survey continued to be domestically focused, with 81% indicating that more than 60% of their sales in 2020 would result from domestically produced and/or sourced products. However, 30% indicated that they had increased the use of wood imports in their respective product lines over the past five years, which was similar to recent studies. Of those reporting increased use of wood imports, 38% imported components or lumber (the lowest percentage to date), 20% imported finished products, and 42% imported both finished products and lumber or components. 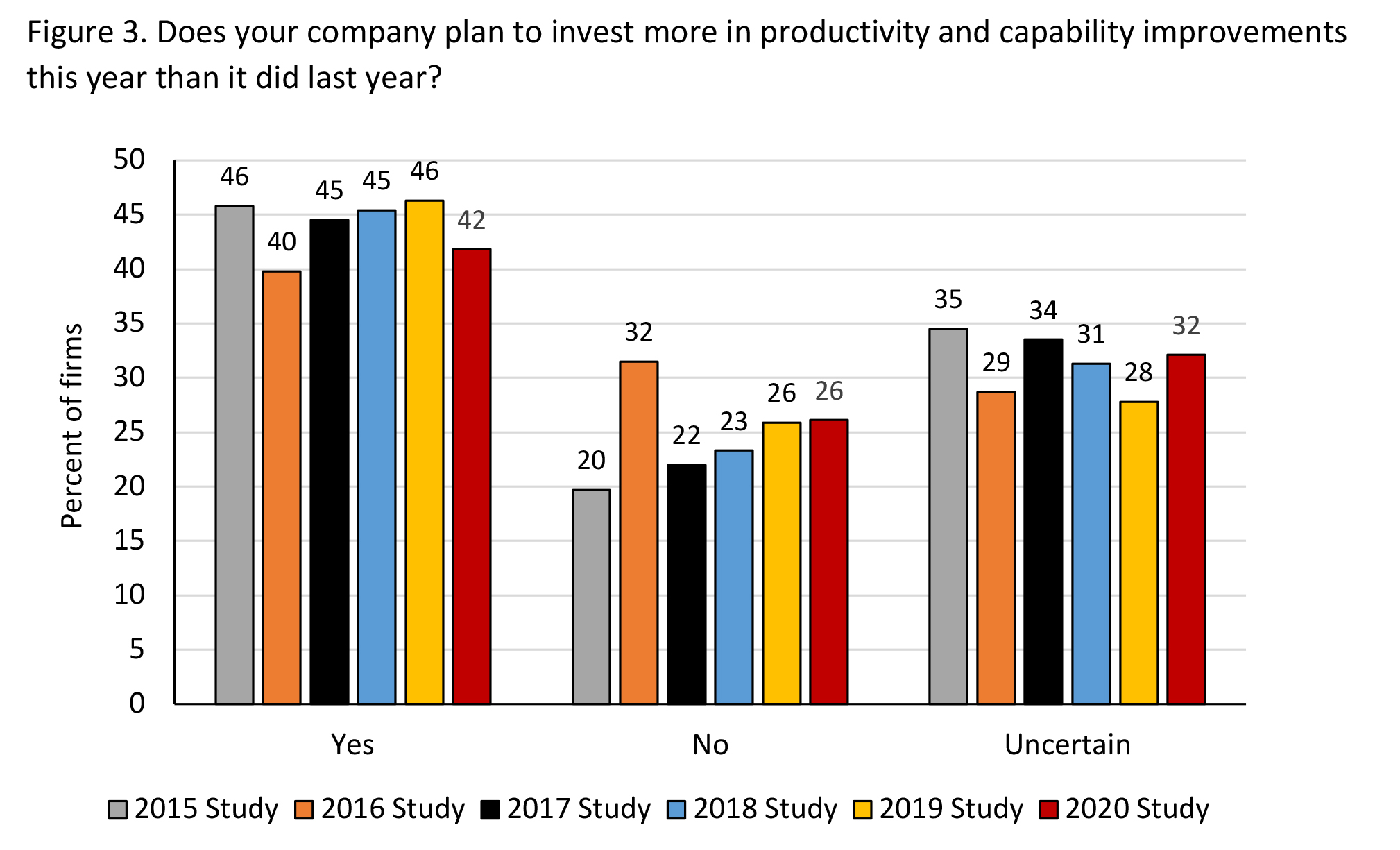 Planned investment activities
Nearly 42% of respondents indicated their firms planned to spend more in 2020 compared to 2019, which was slightly less than the previous three years (See Figure 3). An additional 32% were uncertain of the amount.

When asked about their firms’ investment plans over the next three years, 67% indicated they would spend less than $250,000, which is somewhat higher than last year’s result (Figure 4). Accordingly, there was a decline in those firms reporting they would spend between $250,000 and $1 million on investments, accounting for 24% of respondents. Few companies planned more than $1 million in investments (8%), which was a large drop from last year (14%), but likely a partial result of relatively few large companies responding to this year’s study. 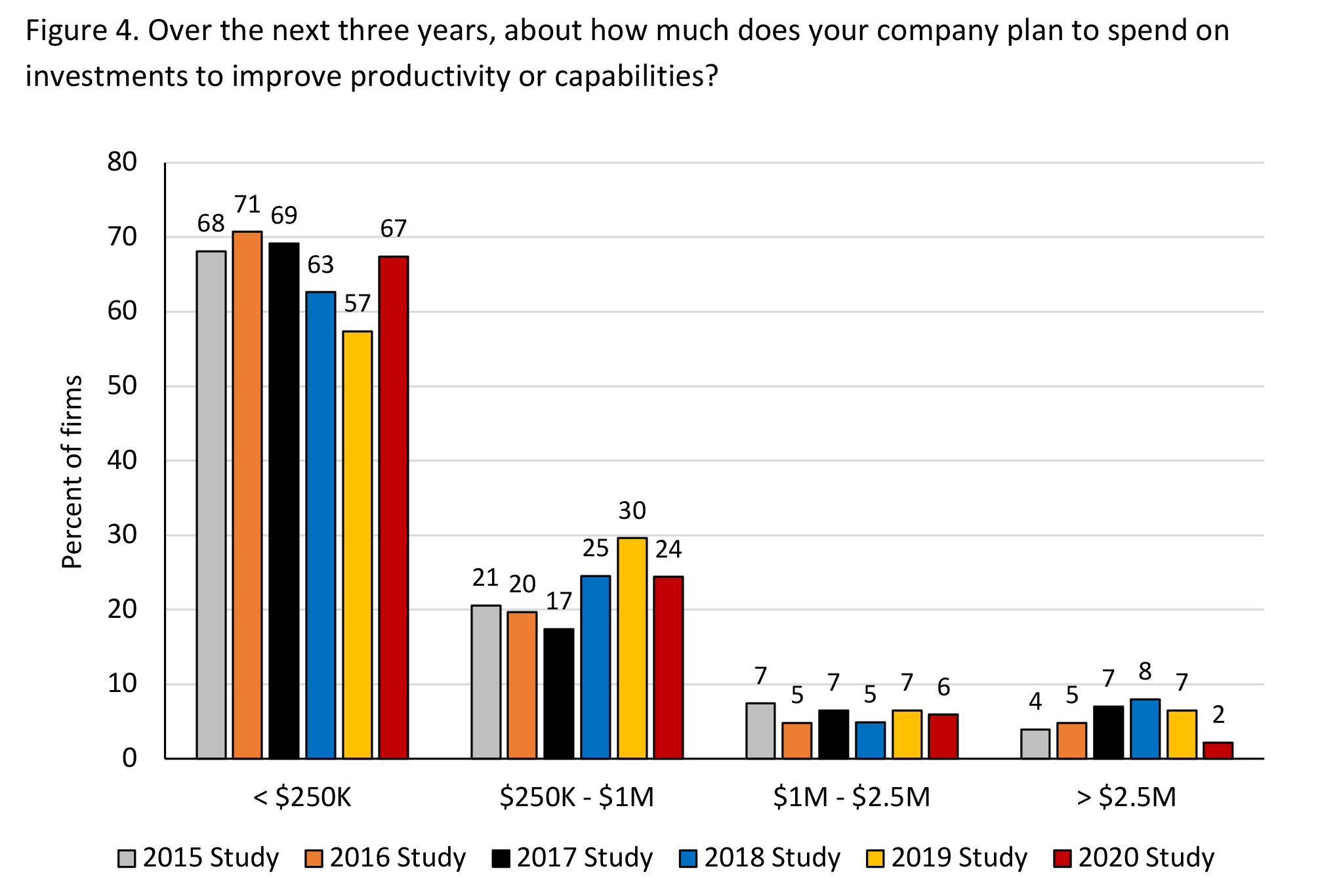 The study also assessed the general types of investments planned over the next three years (Figure 5). Several manufacturing-based investments continue to appear near the top of the list. For the 2020 study, employee training, finishing, assembly, and solid wood processing were mentioned relatively frequently, although employee training dropped several percentage points from last year’s study. Marketing, advertising, and sales force expansion ranked near the middle of the list. 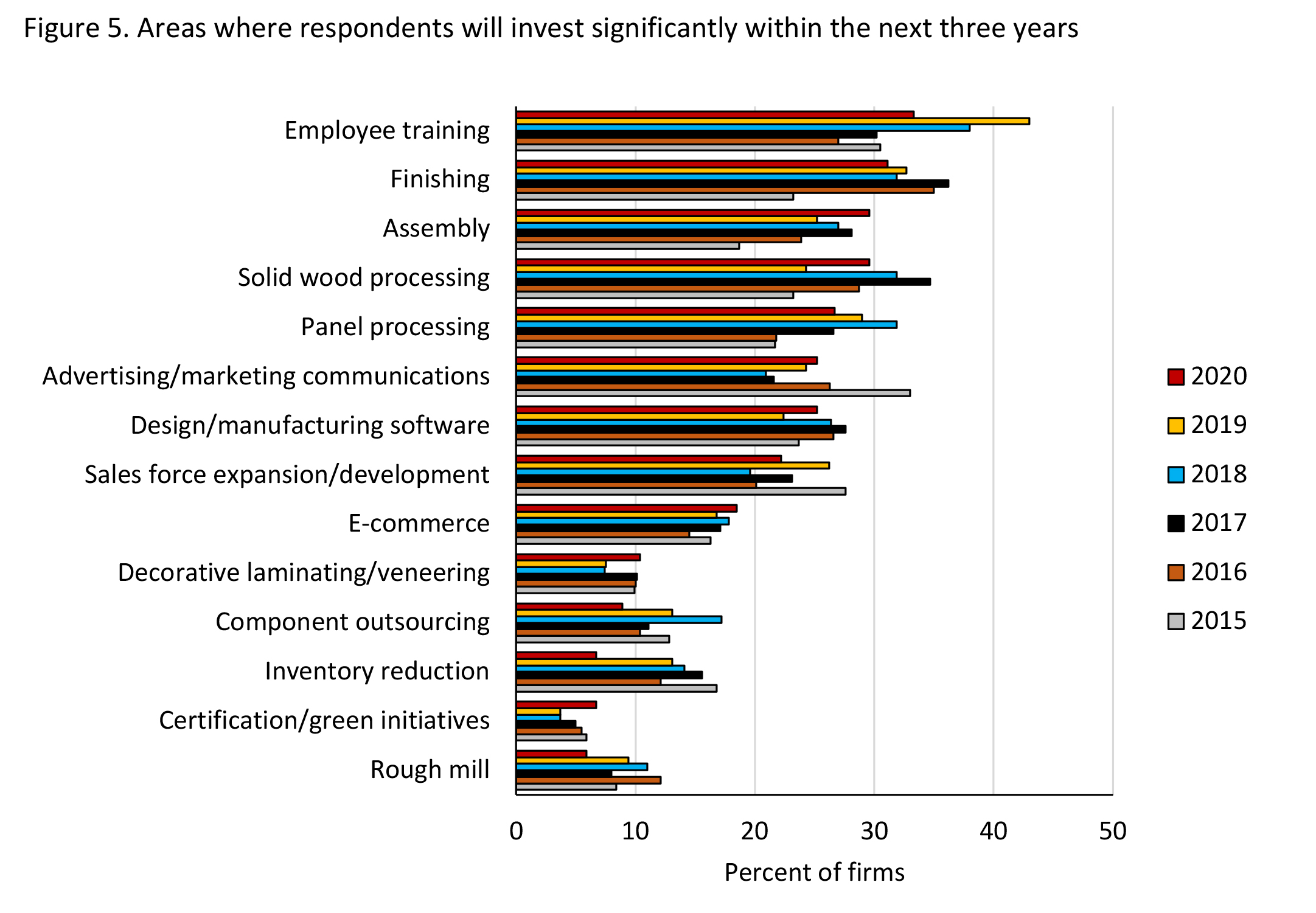 Lastly, respondents were asked to indicate if their firms had increased the use of computerization in several areas over the last three years (Figure 6).

Computerization increased in several applications. A majority of firms indicated they had increased computerization to collaborate with customers in design activities, in their manufacturing processes, and in accounting. Around 30% of respondents increased use for inventory tracking and supply chain management, similar to past years. 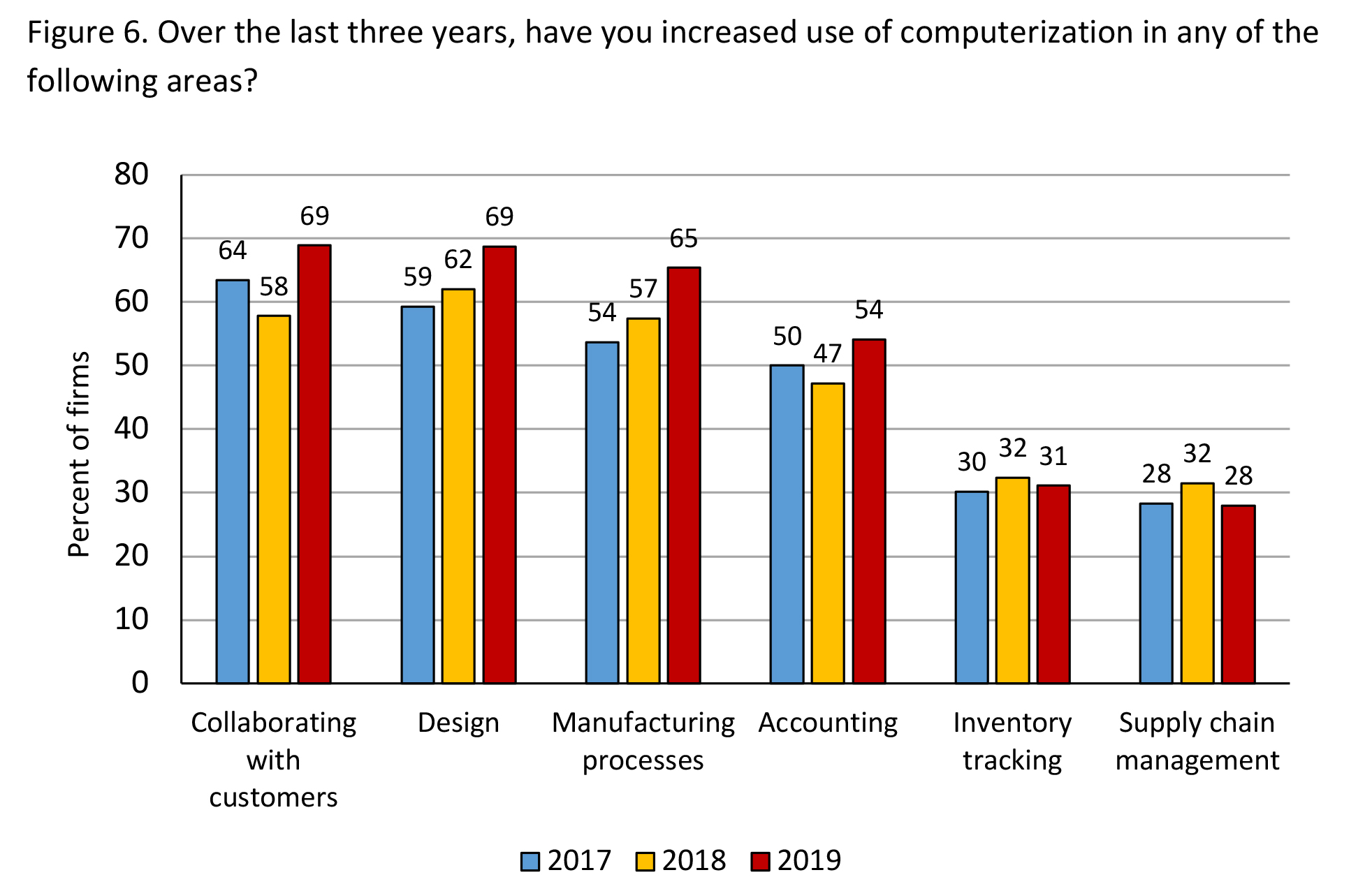 Summary
There was an uptick in firms reporting a sales volume decline in this year’s study, which seems consistent with the decline in overall U.S. spending on single-family construction in 2019. This trend likely reflects the continued importance of the single-family construction market to the secondary woodworking industry, as over a third of responding companies reported that 61% or more of their business was directly associated with this market. These results largely were separate from economic impacts of the coronavirus pandemic, as they represent changes from 2018 to 2019.

Perhaps more influenced by coronavirus disruptions were business investment plans for the coming year. There was an increase in uncertainty for 2020; as one respondent explained, their firm was planning to invest in manufacturing equipment but now they were unsure. Plans for employee training, while still the most prominent area for planned investment, have declined for the short term, perhaps again a function of uncertain business conditions. There also were increases reported in the use of computerization in several business applications in this year’s study, especially for customer collaboration, design, and manufacturing processes. Trends to watch regarding computerization will be digital communications (video conferencing, e-commerce, etc.) and data-driven manufacturing.

About the survey
This is the eleventh consecutive year for the Housing Market survey. While several of the questions have remained the same from year to year to help track industry trends, more recent studies also have included questions related to investment and computerization activities. The 2020 study was conducted in February/March/April via e-mail invitations sent by Woodworking Network/FDMC to their subscribers. A total of 135 usable responses were received, with later respondents perhaps impacted more by coronavirus disruptions as state-level restrictions were beginning in many areas.

Similar to past years, kitchen/bath cabinet producers comprised the largest percentage of the sample, representing 47% of respondents. Eleven percent of respondents were molding/millwork producers, 10% each were household furniture and architectural fixtures firms, 5% were producers of office/hospitality/contract furniture, and 4% manufactured dimension or components. While an additional 13% indicated their production was in “other” categories, most could reasonably be classified into one of the aforementioned categories or the manufacture of closet systems. Similar to past years, most responding firms were small, with 56% having sales of less than $1 million in 2019, and another 31% having sales of $1-$10 million. Furthermore, 70% of respondents had 1-19 employees and another 16% had 20-49 employees. Only 14% had 50 or more employees, which was the smallest percentage to date.

A majority of respondents (76%) held positions in corporate or operating management or were the owners of their respective firms. Responses were received from 38 states and provinces, with CA, FL, GA, IL, MN, OH, ON, PA, and TX each accounting for at least 4% of the total responses. Geographic markets served ranged from a high of 33% doing regular business in the Midwest to a low of 19% doing regular business in the Northwest. Business conducted by respondents in all other U.S. regions (eight total) fell within this relatively narrow range.

About the authors: Matt Bumgardner is with the Northern Research Station, U.S. Forest Service in Delaware, Ohio. Urs Buehlmann is with the Department of Sustainable Biomaterials at Virginia Tech, Blacksburg, Virginia. Karen Koenig is an editor at Woodworking Network.