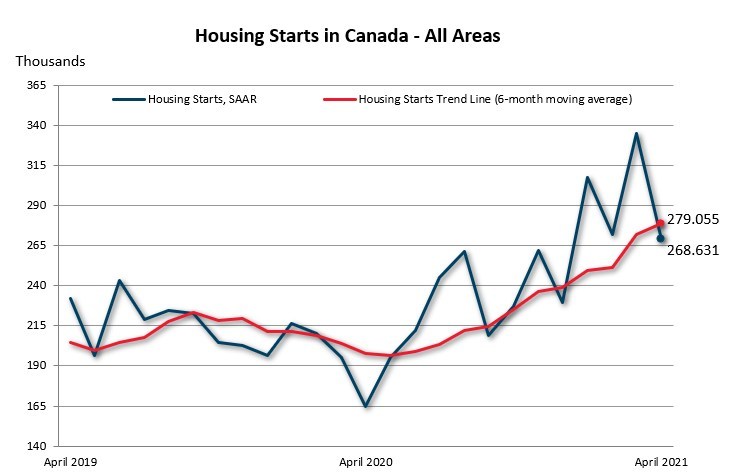 OTTAWA – Housing starts in Canada cooled off precipitously in April, declining by 19.8% compared to the red-hot upward trajectory reported in March by the Canada Mortgage and Housing Corporation (CMHC).

The standalone monthly SAAR, the seasonally adjusted annual rate of housing starts for all areas in Canada was 268,631 units in April compared to 334,759 units in March. Multiple urban starts decreased by 22.8% accounting for the biggest contributor to the drop-off.

Bob Dugan, chief economist of the CMHC, remained upbeat as the six-month moving average of the monthly SAAR showed housing starts climbing from 272,164 in March to 279,055 units in April. The CMHC uses the six-month moving trend measure as a complement to the monthly SAAR of housing starts to account for considerable swings in monthly estimates and obtain a more complete picture of Canada's housing market.

"The national trend in housing starts remained elevated in April, despite a decline in the level of monthly SAAR starts from the record high set in March," Dugan said. "In April, multi-family SAAR starts declined or moderated in most CMAs that had seen strong growth in this segment the previous month, including Toronto and Vancouver. Single-detached SAAR starts held steady following a modest increase in March. Nonetheless, the overall trend-level of activity remains elevated as a result of strong activity so far this year." Interfor to acquire four U.S. sawmills from G-P for $375M