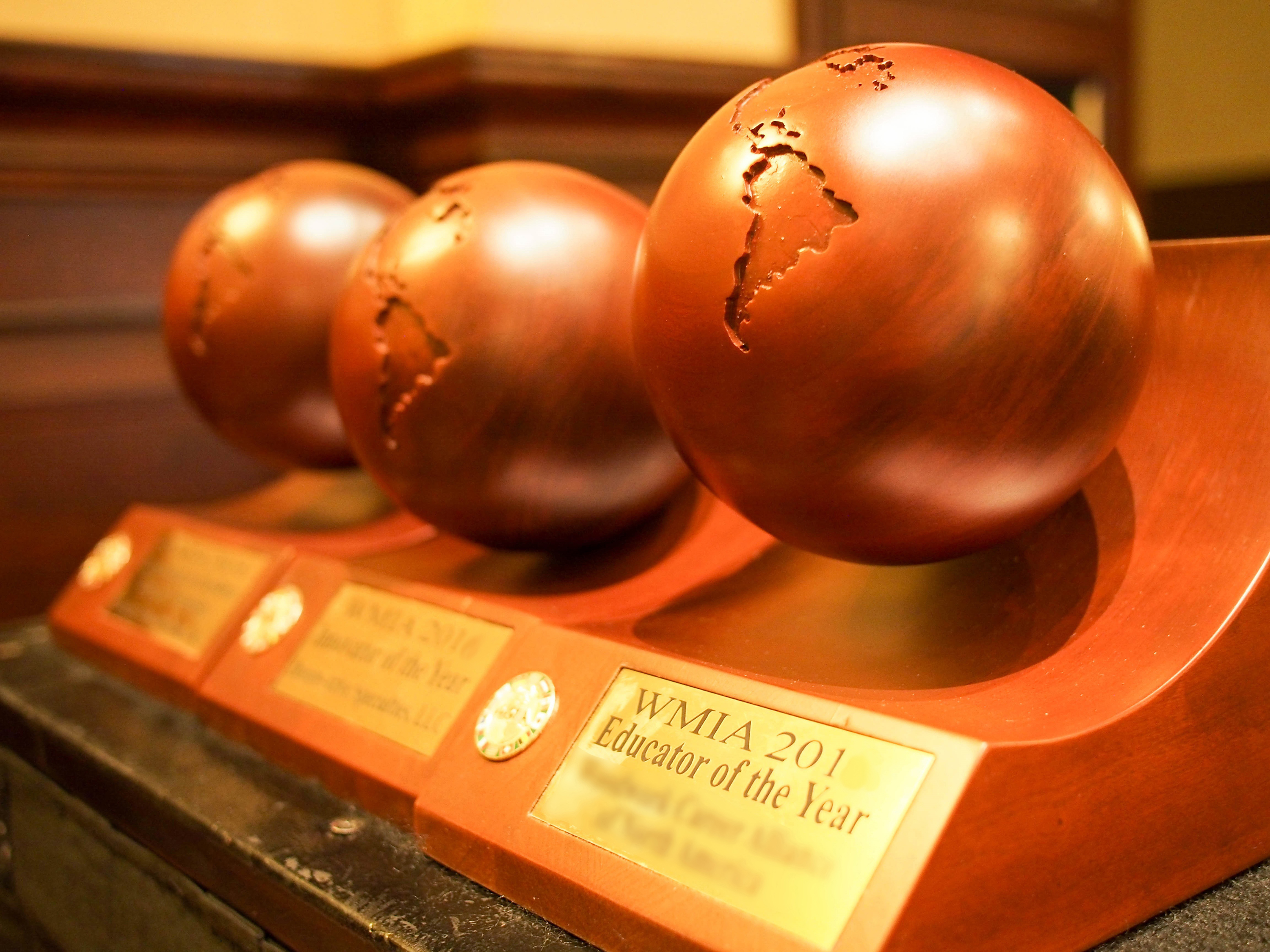 WMIA awards Wooden Globes for Commitment to Excellence Through Technology, Innovator of the Year and Education of the Year. This year’s winners were Haas Cabinet, Crystal Cabinet Works and the New England School of Architectural Woodworking.

A separate award is reserved for the field of education, underscoring the importance wood machinery suppliers place on training, work skills, and development of our industry’s future leaders.

Awards are given in the three categories according to the following criteria:

Commitment to Excellence Through Technology: Nominees for this award represent the value of continued investments in high technology machinery — investments necessary to compete successfully in today’s global market. A criteria of the award is that a significant portion of the machinery investments have been made through WMIA member companies. The owner and top management must be strong advocates of using high-technology machinery to maximize profits and maintain a competitive edge.  The 2017 winner for this category was Haas Cabinet. (See below for more on Haas Cabinet.)

Educator of the Year: This award goes to an educational institution or company with a structured curriculum tailored to training individuals for careers in the woodworking industry. Criteria for the award requires hands-on training on high technology machinery supplied by one or more WMIA member companies. The winner of this category was the New England School of Architectural Woodworking. (See more information about NESAW, below.)

The WMIA Wooden Globe Award itself is a cherry wood globe cut from a solid block. Since 2007, Pittsburg State University has been WMIA’s source for producing it. PSU’s involvement began in 2001 when it first won the Educator award.

For more information about WMIA and the Wooden Globe Award program, visit WMIA.org. 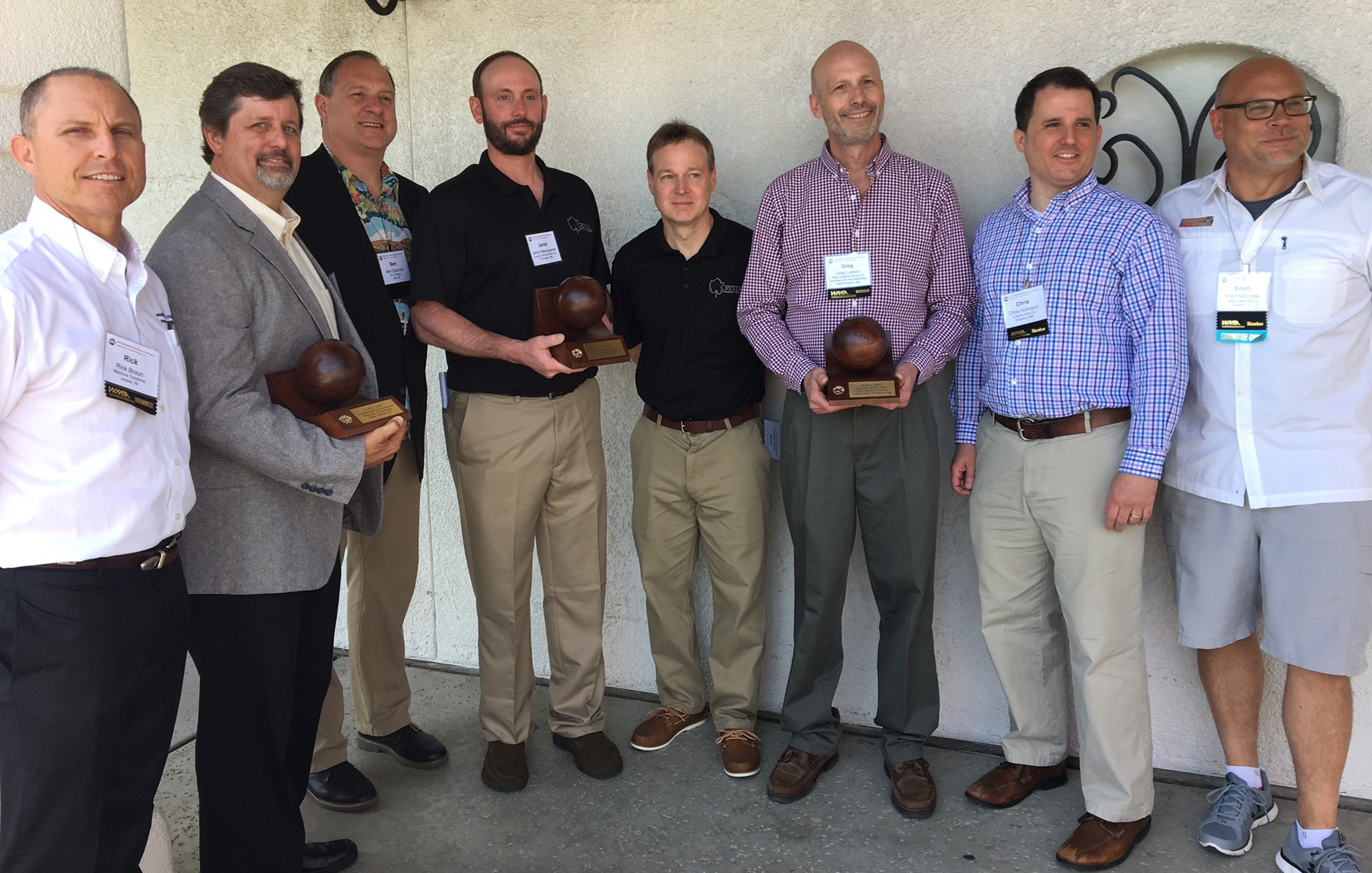 The 2017 WMIA Wooden Globe Awards were presented April 27 in ceremonies at the annual Woodworking Industry Conference in Rancho Mirage, California. 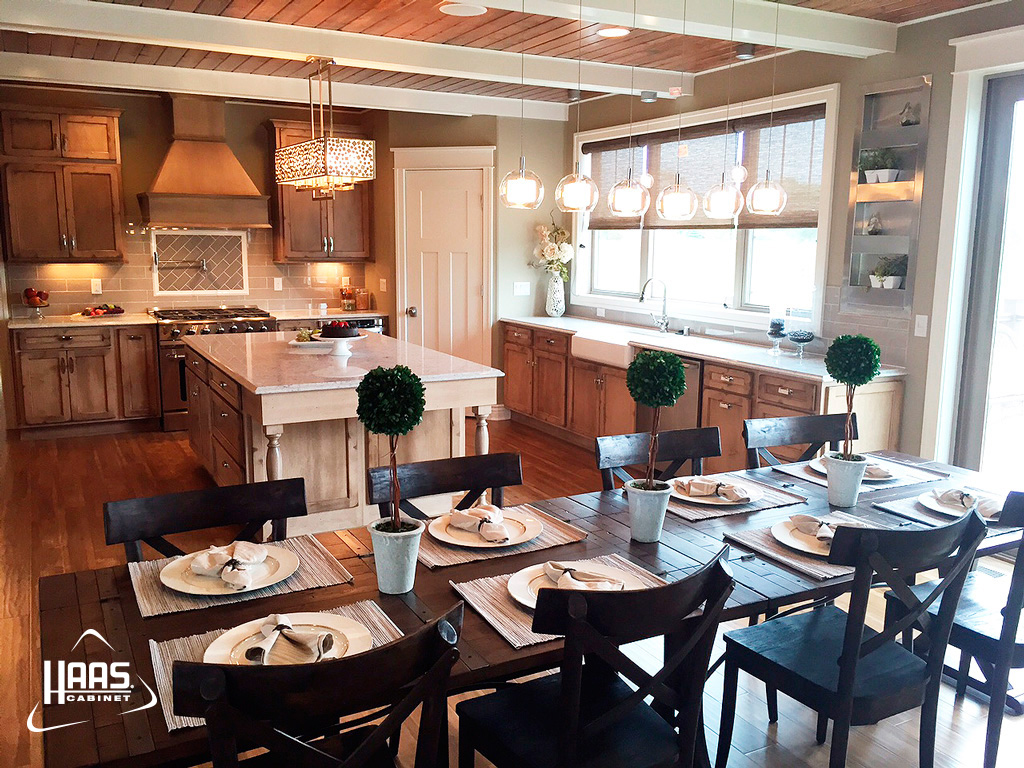 Based in Sellersburg, Indiana, Haas Cabinet is a family owned business that has been manufacturing kitchen cabinetry in the United States for more than 75 years. An environmentally sustainable manufacturer, the company was one first firms to adapt to UV finishing and significantly reduce VOC emissions. Products also meet CARB II regulations for formaldehyde emissions.

In accepting the award, Todd Haas, CEO of Haas Cabinet, also described the company’s long-term commitment to technology and craftsmanship. It was a philosophy that began with his grandfather, who founded the company, remained strong throughout his father’s leadership, and continues today under Todd’s management of the firm.

When Todd Haas took over in 2000, he confessed to actually abandoning some technology to adopt simplified manufacturing techniques. But then rising to new challenges, brought sophisticated, multi-faceted automated production equipment and software to the forefront of Haas Cabinet’s operations.

Rick Braun of Machine Solutions, Jasper, Indiana, who nominated Haas Cabinet, described it as a “first-class operation.” Among the technology in use at the 350,000-square-foot plant are Biesse CNC machines, a Selco panel saw, Schmalz material handling, and a flatline finishing system from Giardina. 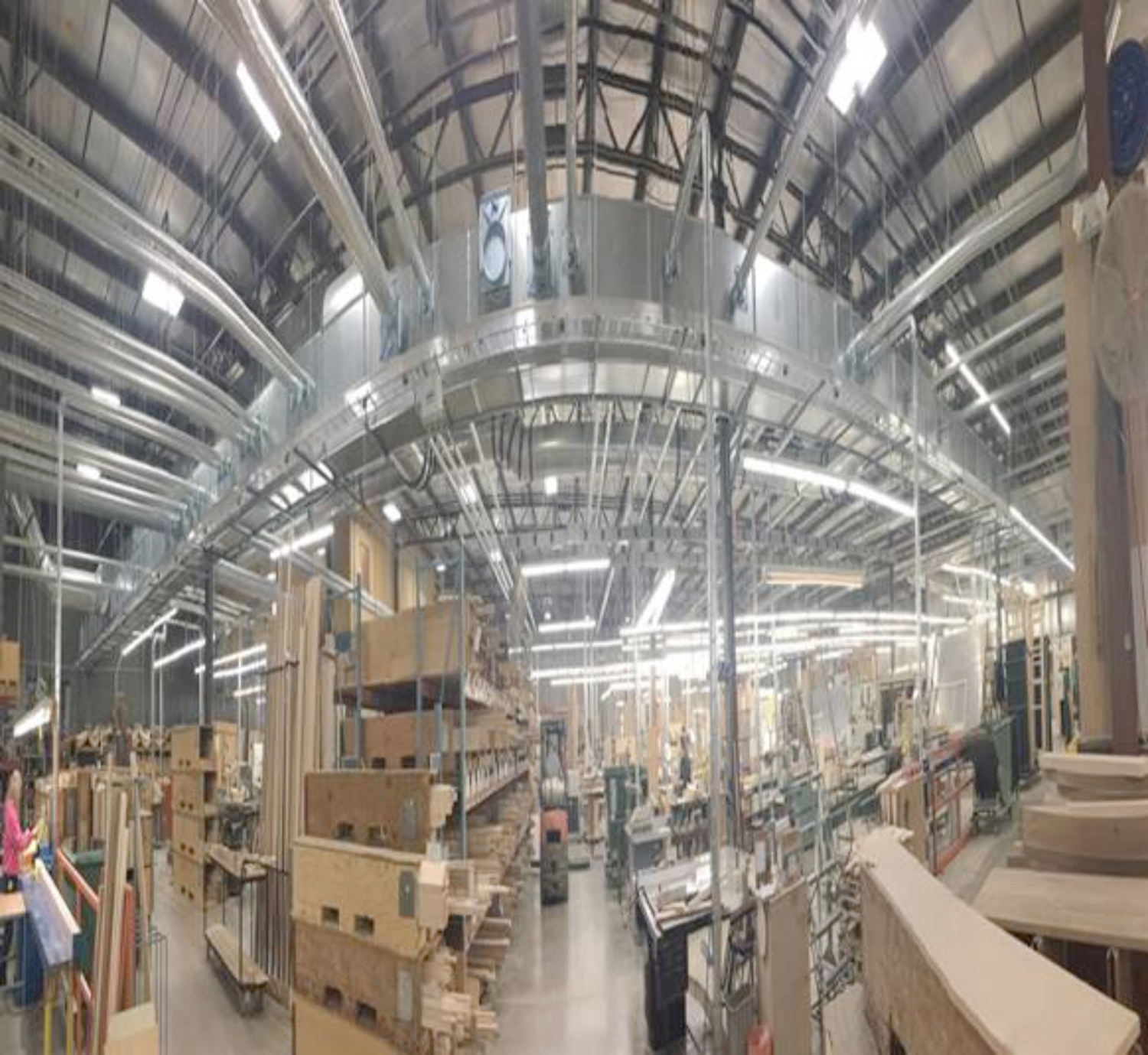 Custom cabinet manufacturer Crystal Cabinet Works completely revamped its dust collection system at the plant for one that was highly adaptable as well as energy efficient.

State of the art dust collection was the story told for the Innovator of the Year prize, won by Crystal Cabinet Works Inc., based in Princeton, Minnesota.

From its founding in 1947, in the garage of cabinetmaker Tom Hammer, the company has evolved into one of the largest custom cabinet manufacturers in the United States. Crystal Cabinet Works is still owned and operated by the Hammer family, with Jeff Hammer, along with his daughters, continuing the tradition.

Rask described how the company – which had 400 employees at the 270,000-square-foot shop and was producing 450 cabinets a day – had outgrown its dust collection system, which serviced 153 pieces of equipment.

A big challenge to choosing a dust collection system was its adaptability, as the company was constantly changing the machine layout as part of its lean manufacturing efforts. Nierengarten explained how the new system provided more capacity directly to each machine, allowing for easier modification of layouts. Computer controls also allowed for automatic opening and closing of blast gates and adjustments to CFM flow and energy use.

Rask said the company’s energy savings of more than 1 million kWh per year was equal to the power usage of 94 average homes or 1.8 million hours of LED television use. Ben Dipzinkski of Hocker North America (formerly O2 Filtration), who nominated Crystal Cabinet Works, emphasized the challenge involved in keeping up with the company’s ever-changing strides for more efficiency. 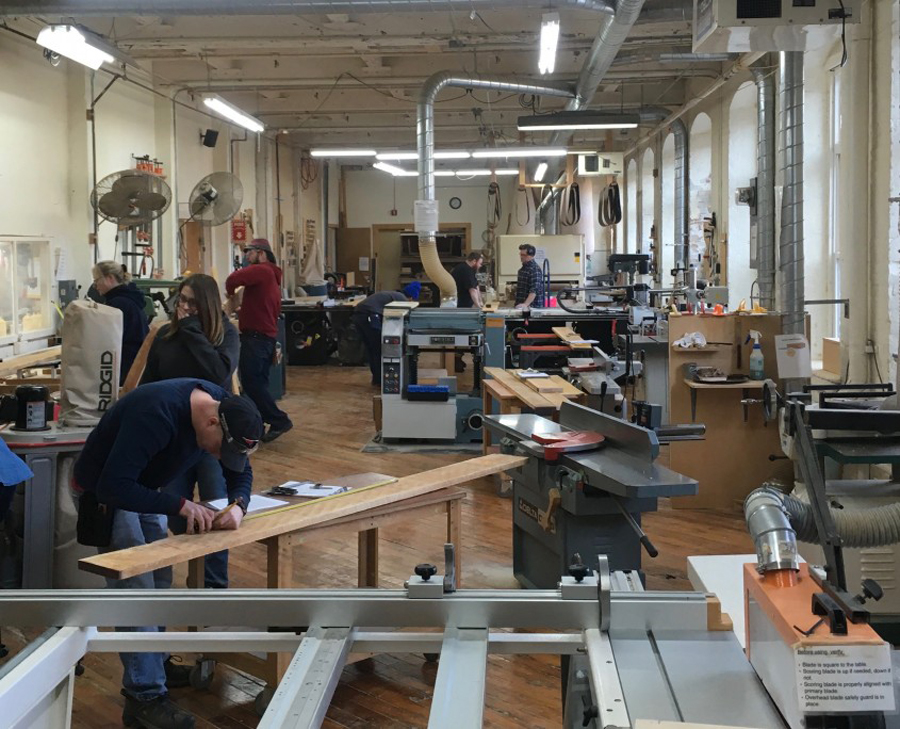 Accepting the award for Educator of the Year was Greg Larson of the New England School of Architectural Woodworking in Easthampton, Massachusetts. Founded in 1992, the school began as a collaboration between the Division of Continuing Education at the University of Massachusetts, Amherst, and a group of professional woodworkers. Originally designed to offer adult beginning and intermediate classes in woodworking, it has expanded to include architectural woodworking career training. Greg and Margaret Larson took over the school in 2012.

He described the program as offering a “very real-world experience” to students, who average 32 years of age and include both young people starting out and older career changers. The private school’s program even includes building and installing kitchen cabinet projects for the local community.

A full-time teacher in the architectural woodworking program, Greg also sits on the board of the AWI National Skills Standard Initiative. Margaret manages the marketing, customer service, and financial components of the business. Their goals, according to the school’s website, are to develop more industry partnerships and expand the use of technology in the career training program. A sister school, The Workbench, offers night and weekend workshops.

Chris Hofmann of Colonial Saw, who nominated Greg Larson, read testimonials from students of the school who had gone on to successful careers. Greg added said he has received positive responses from industry demanding quality employees and is able to “place nearly everybody” who successfully completes the program at NESAW.