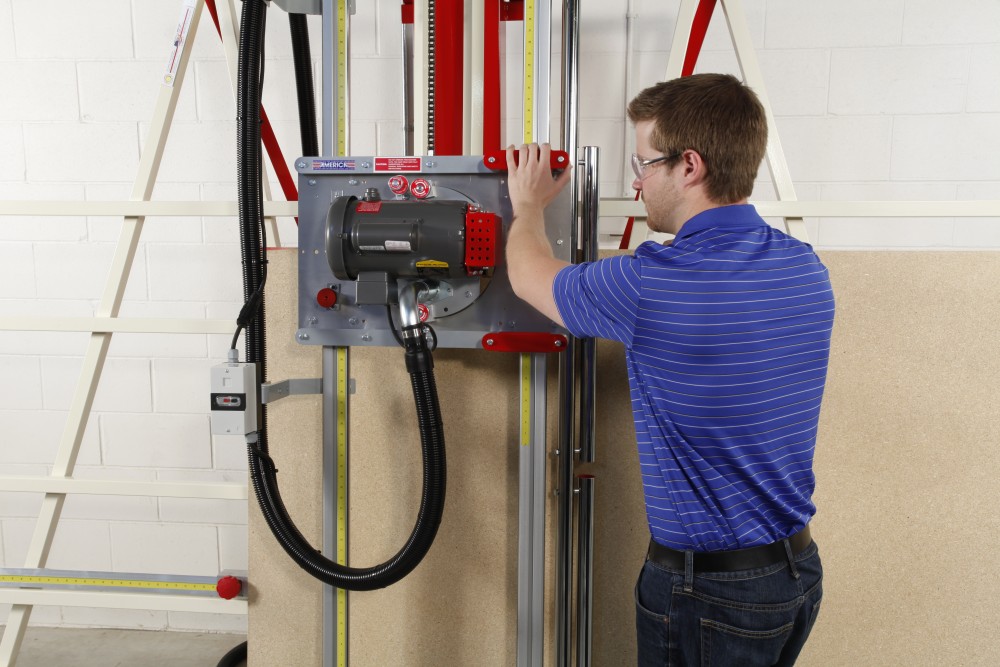 Reshoring is a hot topic among U.S. manufacturers. According to a survey released in October 2014 by Boston Consulting Group, 54% of manufacturing executives who have out-sourced production overseas are considering bringing some or all of their foreign production stateside.

The team at Safety Speed Manufacturing joins in applauding the reshoring trend but will not be joining the movement anytime soon. That’s because the Ham Lake, MN-based company has sold more than 65,000 woodworking machines proudly made in the USA since producing its first vertical panel saw 57 years ago. This is not to suggest that Safety Speed hasn’t been subjected to the same forms of economic and regulatory pressures that have driven thousands of U.S. manufacturers overseas – resulting in the loss of millions of jobs.

Safety Speed President Brian Donahue has little trouble rattling off a list of challenges his U.S.-based company faces. “We do have a higher cost of doing business in the U.S. compared to many of our foreign counterparts, especially those in China and the Far East.

These costs include healthcare, insurance benefits, wages, environmental and safety compliance, etc.” Donahue says. “Our biggest challenge, though, has been finding people to come into the industry and be dedicated to working in a manufacturing operation. We have been quite successful to this point but we see a challenge ahead of us as our work force ages.”

While he is thankful that the majority of his staff has been with the company for more than 10 years, Donahue is not taking the skilled-worker shortage sitting down. Safety Speed is a long-time member of the Wood Machinery Manufacturers of America and the Association of Woodworking & Furnishings Suppliers. The two associations are working together and with other trade organizations to lobby Congress for supporting funding of career and technical education on a national level.

Donahue and Safety Speed Sales Manager Shawn Larkin visited the Washington, DC, offices of their Congressmen during the WMMA’s Public Policy Fly-in this past September. By virtue of that participation, Donahue was able to successfully persuade Rep. Tom Emmer (R-MN) to attend the cooperative dealer training and open house hosted by Safety Speed last month.

Capitalizing on the Home Court Advantage

Rather than dwell on the many manufacturing challenges, Donahue prefers to discuss why Safety Speed stays firmly rooted to its American ideals and deeply committed to remaining a U.S. manufacturer.

“We could have our machines made cheaper overseas but that’s not us. By maintaining our manufacturing operations domestically, we are better able to capitalize on our home court advantage by offering our customers high-quality machines at a great price.

“One of the biggest advantages we have is that we are involved in quality control and product manufacturing at all times during the building process of our equipment,” Donahue adds. “We can respond quickly to an individual customer’s requirements for configuring new machines and providing prompt replacement part deliveries.”

Safety Speed builds its vertical panel saws, combination vertical saws and routers, widebelt sanders, edgebanders and screw pocket machines to order. Lead times are generally seven days from order to shipment for a custom-made machine. “You tell us what accessories you want on the machine and we immediately schedule the build, produce it, test it and ship it out the door,” Donahue says.

“Our machines are double checked by a professional with at least 15 years of experience of machine building. Parts can be shipped for delivery in 24 hours if needed.”

“I never fail to have woodworkers and sign makers at shows such as LIGNA (the world’s largest woodworking show in Hannover, Germany) and FESPA Europe (a huge European event for print and sign makers) ask if we are made in the United States before they even consider looking at our products. Made in USA still has a lot of clout throughout the world with end users and dealers. They know that USA stands for quality and workmanship.”

The bottom line, according to Donahue, “We’re proud to be a U.S. manufacturing company with a great process in place that is making money for ownership and for 27 other U.S. families. That works for us.”

safety speed
made in america